We don’t do enough polls on this forum so I thought I’d give it a try. I’ll start with this basic question:

If you could only ride one ride at Magic Kingdom, which would it be?

Note: I included all “Headliner Attractions & Entertainment” from the personalized touring plan wizard that had a ride vehicle. No shows, meet & greets, parades, fireworks, walk-throughs, or other entertainment. Due to the limitation of 20 options in a poll, I made the tough call to consider Carousel of Progress a show and eliminated the following attractions with low ratings on TP:

Also, I intentionally worded the question the way I did since “best” can be interpreted many ways, and this is the way I’m interested in.

If I get good participation I may continue this series with a tournament for the other types of attractions at MK and the remaining parks.

Is there a way to edit this… I just accidentally picked Astro orbiter. I haven’t even ridden it, and feel safe saying I’m sure it wouldn’t be my favorite

If I only got to ride one ride I would pick people mover, which was a big surprise even to myself! You get to see a lot of other rides, it’s relaxing, and you get some great views of the castle.

Edited to add: this would be the best way for me to soak in MK. 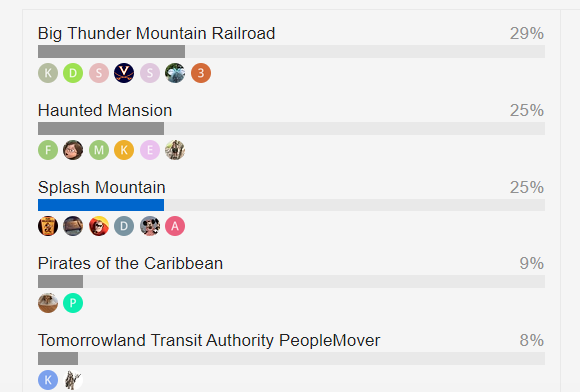 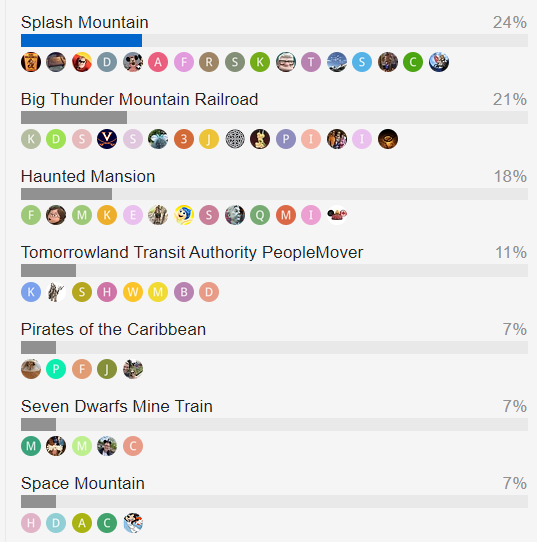 Definitely Space. Because I can’t ride Space.
But this poll exists in an alternate universe where I can ride Space.
Thanks, @Jeff_AZ you made my day a little brighter.

I would always have picked Space before but when we rode in August it just seemed so slow! I know it actually is slow, but it used to at least feel faster. It’s dropped way down my list of priorities.

This was a super hard choice for me! It was between Space and BTM. Ended up going with BTM, because it’s so much fun at night!

This was surprisingly a really difficult question to answer! So I tried to think of what if I did a four parks one day challenge with one ride per park and the ride I smile the most on and have the most fun, for a very short period of time, is SDMT.

I had the same answer you did it seems, but I didn’t find it hard. For me, if I never experience another ride at MK again I’ll be fine with it. With that said, the ride I most want to re-experience is 7DMT, bc I like the theming and dark ride/coaster hybrid. Snow White is an OG princess IMO & it’s a charming little set up.

I had to pick Splash. It was one of the few rides I enjoyed more than its West coast counterpart. 7dmt was a close second, followed by people mover to close my top three.

I’m surprised how low PoC is! In addition to the nostalgia factor for me, it has the best scenes IMHO. The ship attacking the fort!

Not to mention the unexpected drop!

Not to mention the unexpected drop

I don’t believe I have ever been in MK without riding either Haunted Mansion or PeopleMover (or both). On our 4 parks day, we rode both towards the end of the evening. The toss-up for this poll went to HM, although both would have been fair choices.

We rode Space 3 times during our trip last week. Two times it was really fast (faster than I remember from the first visit 3 years ago).
But one time it was indeed slow.

Something is going on with this ride