Will Trade: Random Covid Info for Targeted WDW/UOR Info (aka Land of a Gabillion Silly Questions)

Us too!! (Waves hand vigorously)!

Hey! It’s super easy to update a name in MDE.

I put together the steps on another post recently, and I hope you’ll hop over and take a look.

Name and gender change on MDE Other

Ok, I’m using the Walt Disney World app, so if you’re on desktop your steps may vary slightly. All of this assumes that the individual is 13+ and manages their own MDE account. (For both @BeckyT13 and @ninjasherrie) In the bar at the bottom, choose the 3-lines menu. Scroll down and choose “My Profile”. Choose “account settings” Update the name and honorific as desired. Scroll to the bottom and choose “done”. That’s it!

For those of you planning May/June trips that might be interested in liner meetups or knowing who you might bump into, I’ve set up a Google form to collect everyone’s plans. You will need to sign into Google to use it, but this will also give you the ability to update your response as needed. After you submit your initial response (you can enter bare minimum data to start if you’d like), private message your gmail address to me here on TouringPlans Forum to gain access to the results.

Want to see what other Liners your plans might overlap with? Complete this form, then private message your gmail address to @amvanhoose on TouringPlans Forum to gain access to the results. To make filtering easier, please use the following...

And a huge thanks to @Jeff_AZ for taking it for a test drive!

@Jeff_AZ looks like we could see each other at MK or BLT!

For those of you planning May/June trips that might be interested in liner meetups or knowing who you might bump into, I’ve set up a Google form to collect everyone’s plans.

Well now I’m even more bummed about cancelling my trip for the first week of June. Thanks

I havent been on the forums much lately - why did you cancel?

Pretty simple. DW and I are not comfortable with the level of virus circulating in the US currently.

not comfortable with the level of virus circulating

and Florida is a hot mess, per usual

I fully respect your decision - everyone has to decide what’s best for their family.

Just curious though, how did you weigh the likelihood of decreasing levels between now and early June? With 3M doses of vaccine administered per day and over 30% of the U.S. population currently having received at least one dose, we should see 150M additional doses before the beginning of June, meaning well over 50% of the population will have received at least one dose.

I imagine case counts will be much lower by then, and hospitalizations and deaths will be even further down since most high risk people will have had an opportunity to be vaccinated.

That said, I recognize there is uncertainty so I could see waiting until everything actually materializes.

I’m betting that things will continue to improve like you say. However, we plan to tell the kids the day we leave. I can’t disappoint them again like last time if we do end up canceling.

I am concerned hospitalizations aren’t decreasing. A significant portion of those at highest risk for hospitalization are more than 4 weeks post-vaccination now. It does give me pause as well. If I feel reasonably certain CM have had a chance to be vaccinated, at least 1st dose, by mid-May, I’ll feel a LOT better about going.

Yeah, at least ours are old enough to deal with it a bit better. They know it’s all tentative.

Hospitalizations are holding steady nationwide over the last few weeks despite continued decreases in the southern states, mostly because of increases in the northern states (primarily Michigan) and plateaus elsewhere. But I see some early signs that they are headed back down in some areas (see the last few days of New York’s plateau in the chart below). The next few weeks will hopefully bring good news since we are vaccinating at such a swift pace.

Just curious though, how did you weigh the likelihood of decreasing levels between now and early June?

We have. Right now we still have our kids in remote learning and are not doing outdoor activities with other families. We figure by the summer cases will be down enough that we will feel comfortable doing outdoor playdates and have signed them up for outdoor day camp (at a camp that requires masks for all kids), but in our opinion a trip to WDW is likely higher risk (airport, indoor attractions, indoor areas of resort) than outdoor activities in our community.

Us too!!! (Waving enthusiastically)

Our ICU is finally back down under 100% again. Let’s hope it sticks this time! The weather has been mostly beautiful for the last month, so that’s helped. We’ll see what happens when people retreat to AC again. Some areas have a lot of vaccine hesitancy…

Some areas have a lot of vaccine hesitancy…

I do expect a demographic split, perhaps regional. But overall, I’ve been fairly pleased with the response so far. These long lines and instant evaporation of appointments are a good sign.

been fairly pleased with the response so far

but will we have enough ppl to reach herd immunity? I know here they dropped to 16 b/c they weren’t running out of vaccine w/ the 40 group. Today was busy but what will the rest of the week look like? There were many parents w/ teens but the majority of ppl inline at FEMA site were young adults w/ a smattering of middle aged.

Based on the trends in polling, I think we’ll get there. The “wait and see” people have waited and they have seen, and increasingly they are saying they will get it ASAP. You can quibble on the numbers between different pollsters, but they’re all generally showing that same trend toward decreased hesitancy. 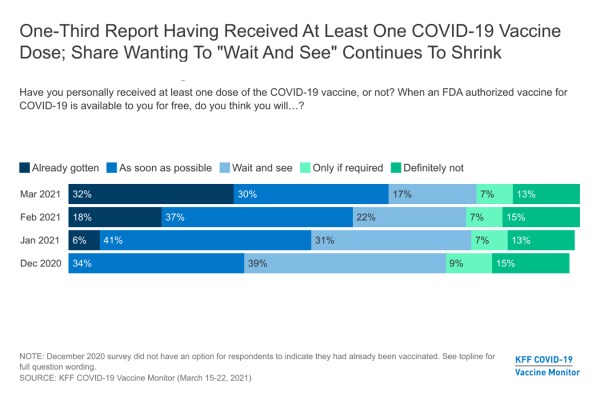 A nationwide poll released by KFF also revealed which arguments are most compelling to persuade people to get a shot — and which ones are unlikely to work. 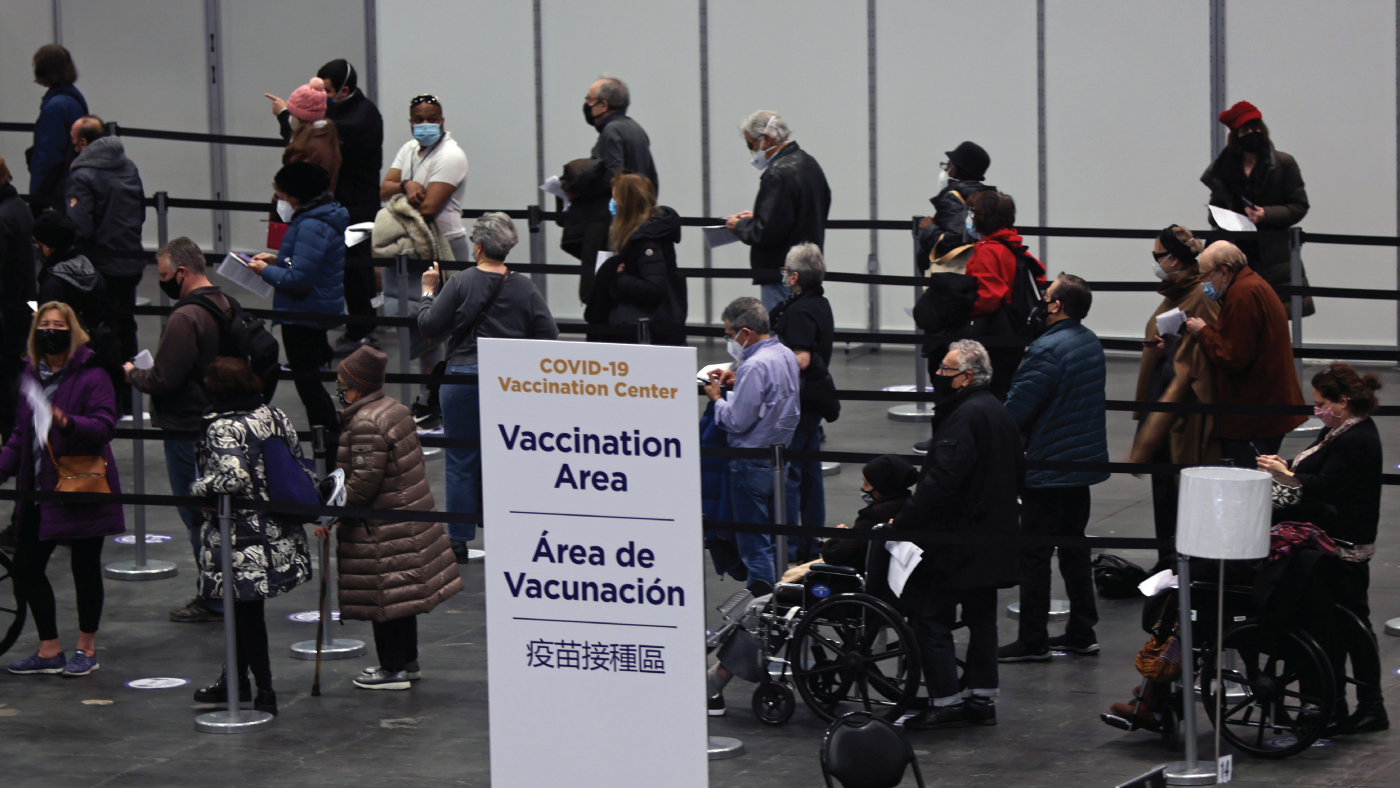 Growing Share of Americans Say They Plan To Get a COVID-19 Vaccine – or...

77% think vaccinations will benefit the economy. 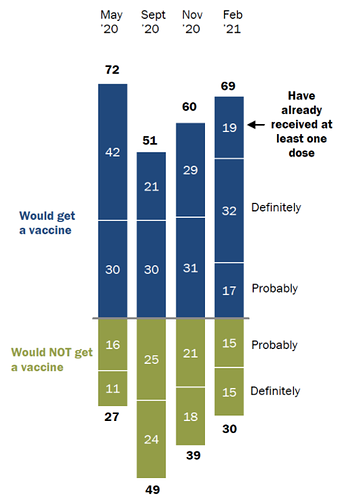 Thanks for sharing encouraging news!!! Maths for the win again

Based on the trends in polling, I think we’ll get there.

I think it depends of what percentage is needed for herd immunity, and we don’t know the answer to that yet. If it is 70%, then I think you are right that we will get there. If it is 80%, then I’m not so sure. As you correctly point out, the “wait and see” crowd has moved more and more to wanting the vaccine, but if we need to get to 80% (or more) it may be tough.