Screamscape linked to a video showing the Skyliner in action, suggesting it soft opened. Although it is possible the video was merely showing promotional video and not really guests.

Anyone there who can confirm it if soft opened or not?

And of course, while watching the video I found myself getting dizzy and had to stop.

I think any videos are either:

No soft openings reported yet.

Found this great article from a publication that was able to preview the Skyliner a few days ago:

We took a thermometer into the gondolas while riding them and saw 91 degrees as the average cabin temperature, the exact same as the exterior temperature. But, the real feel was significantly cooler, as the thermometer could not account for the strong breeze inside the cabin. These gondolas were built with lots of ventilation ports and windows. The best way to compare the real feel would be standing in full shade with a medium-to-strong wind blowing. For as hot of a day as it was, the gondola was honestly very comfortable for its temperature which was a relief to me. It isn’t as cool as AC, but it is certainly cool enough for the relatively short trip times.

The Epcot, Hollywood Studios, Caribbean Beach Resort, Art of Animation and Pop Century stations each also have a section of runoff track specifically built for guests that may need more time to embark. The Riviera Resort station may have this, but we were unable to see during testing to know for sure.

This track area allows the gondola cabins to leave the regular loading area to come to a complete stop. This allows guests plenty of time to board.

Our exact times to each station are as follows.

Bringing Food on Board:

We also believe that guests should be allowed to bring food and drink onto the ride. There is no signage against it and there is a Joffrey’s Coffee shop at the entrance to the Caribbean Beach Resort station.

But wouldn’t that make the it shortest travel time when going in reverse?

They’re super quick! Still not going on them though

I also read from Josh at EasyWDW that they wouldn’t open until 5:45am for a HS 6:00am open. So, even though they’re fast, they don’t sound like a viable EEMH Rope Drop travel option. (I have not confirmed that anywhere else)

There has been an official schedule released - I didn’t look as I won’t be back for a few years but on chat Liners did say that it was no good for RD.

What do you mean? Those are the travel times between stations. Riviera to Epcot is just the longest leg of the trip. Everyone else has to do that plus the time to get to Riviera. Or am I missing something?

Here’s what I came up with for travel time (not including transfers at CBR:

Those are all impressive times as long as the Skyliner runs smoothly and doesn’t build up a line of passengers waiting to board, especially at CBR. You’d really be out of luck if there was a problem with it after you got to CBR. Sorry, the skyliner is down. We’ll be providing bus service to HS or Epcot. Then you can take a bus from there back to your resort. 60-90 minutes later…
That’s why I wish they would have a walking path under the skyliner.

Except it says CBR to HS is only 2 mins

Yes, because you go directly from CBR to HS. Riviera has to go to CBR first. I updated my other post with travel times from each resort. Nothing will ever beat the CBR to HS travel time, until the Star Wars hotel opens, I assume.

It just feels like the DVC Resort should have the shortest time. At least based on how it’s being advertised in sales.

I realize that’s physically not possible. But why would I buy Riviera when I can stay at CBR on a discount and get to HS in a heartbeat.

why would I buy Riviera

Because you are a DVC member and you want another home resort. You will buy there and you will like it.

Why? It’s the longest leg on the route from Riviera to IG. It also has to slow down at the Boardwalk turn.

Edit: I see someone already answered.

Maybe this little map will help you: 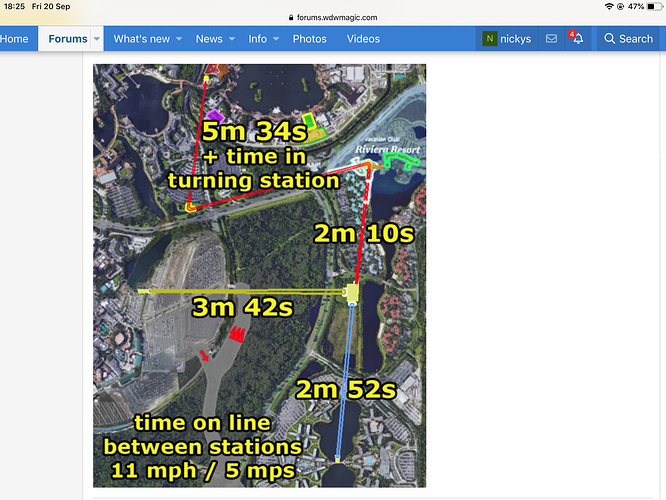 I
Riviera is the closest to IG, thee really isn’t a way to make it closest to DHS as well. It’s like expecting Washington DC to be closer than Houston is to Orlando. Can’t change geography!

The times are slightly different, but close enough. Credit to Mister Penguin on WDWMagic.

Does anyone know if you can get on the Skyliner at Epcot and make a round-trip journey without getting off? We are staying at the Boardwalk in Nov and my kids would love trying out the new Skyliners - wondering if we could get on at Epcot and just stay on for the ~20min ride and then get off back at Epcot?

I’ve never heard any mention of this, but there are separate cable lines running from CBR to HS, CBR to Epcot and CBR to AoA/Pop, so you definitely have to get off if you want to go past Caribbean Beach Resort.

I suppose it is possible that you could ride from Epcot to CBR and stay on to make the return trip to Epcot from there, but I’ve never heard any mention of that being allowed. I think it would be about 13 minutes to do that if it is permitted.

@Nicky_S always seems to know everything about the Skyliner