Poll Time - Have you had Covid? September 2021 Edition

By request of @kerrilux, it’s time to update the Covid poll. Here is a link to the previous poll back in December 2020.

Have you had COVID at any time since the pandemic began? (Select the one option that describes the closest relation to you that has gotten COVID.)

Here are the results of the poll in December 2020 for reference: 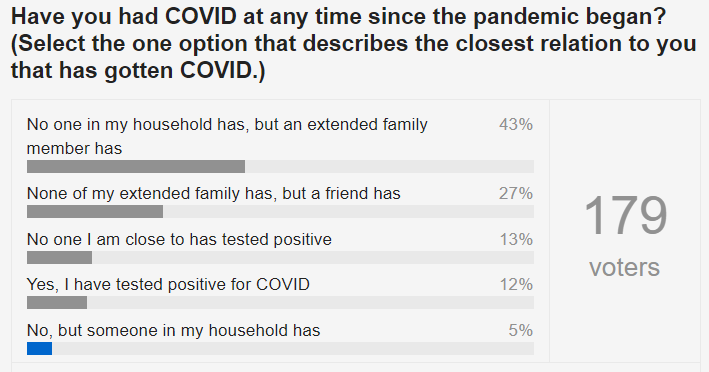 And here are the results from July 2020: 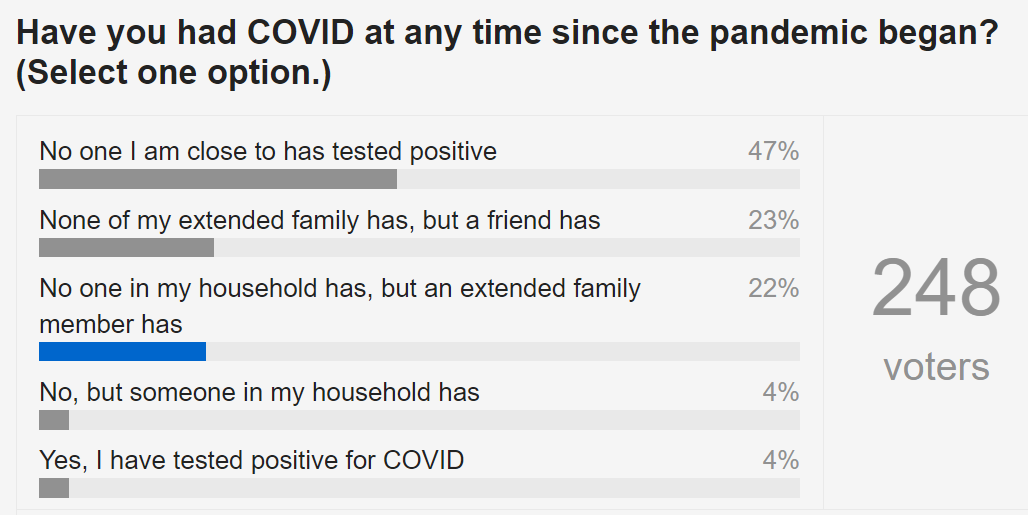 9 family members have contracted covid (across 4 states: FL, WV, IA, MN). 3 were hospitalized. 2 passed away from it.

So sorry for your loss. I considered adding a question about fatalities but I don’t want to make this too grim, though others can share if they feel so inclined.

I’m hard pressed to think of anyone I know who hasn’t had it.

My mom and sister have either never had, or had a sub clinical infection before or after their vaccines last winter.
My DH has antibodies but was never sick.
I assume my kids had it, as well, as I was still preparing meals and doing homeschool, etc.
I’m trying to get them to donate blood to check but I live with a bunch of squeamish people. LOL. Three of them are old enough to donate.

No one in my house (DH and I are vaccinated and we have 3 young unvaccinated children).

My mom and stepdad have both had COVID but no other close family members.

I know of one fatality in my wife’s extended family - I think it is her dad’s cousin. With about 1 / 500 Americans having died from Covid, I think I’m about average in regard to number of family members lost. Unfortunately that distribution isn’t always even.

I don’t know very many people who’ve had it. My father in law caught it in his nursing home in January - he must have been exposed right around the time of his first vaccine. DH and I caught it from him when they thought he was about to die and let us in to say our goodbyes. We assume DS17 might have had it then, he had no symptoms and we didn’t have him tested.

Two weeks ago my friend and her husband, both fully vaccinated, tested positive. Their kids didn’t.

My brother and his oldest daughter caught COVID last summer (2020). Both were sick for 4-5 months from it.

My SIL (married to same brother mentioned above) and their youngest daughter caught it this summer. My SIL was fully vaccinated, and was sick for about 4 weeks.

A couple of family friends passed away from it prior to vaccinations. Another elderly family friend of my father died a couple months ago despite being fully vaccinated.

A youngish man (in his 30s or 40s) died a few days ago after catching COVID from his wife. She works in the school run by the church we attend. (She didn’t catch it from the school, but just is the connection we have to them.) Both were quite sick, but he was in the hospital since August 22. Died just 3 days ago.

My husband had a breakthrough case at the end of July (suddenly lost his taste and smell). He had one day he slept for like 20 hours, then he was pretty much back to normal, with congestion lingering about a week. He wore a mask and tried to distance, but it was difficult. Our 4yo and 1yo then tested positive a week later. They were cranky and tired for a few days, then coughed for a few days. None of them ever had a fever. I was vaccinated Dec/Jan, and got tested 6 different times during our quarantine before I could return to work (with immunocompromised patients). Never positive, never a symptom.

The only people in my life that have been positive have been healthcare workers, a couple in my own office.

Otherwise I don’t know anyone personally that I can think of who has had it.

No one in our household has had it, nor have any of our close friends.

My brother and his wife were hospitalized last summer. My brother almost didn’t make it (he was on a ventilator for 10 days). We haven’t lost anyone to COVID either.

I’ve had several coworkers test positive and a few family friends and neighbors. I’m pretty sure my bff was positive, but she refused to get tested. She had a strong reaction to her first vaccine dose, but not the 2nd which I think further supports she had it.

My wife and I both had it last December. Her mother also had it at the same time.

Our daughter never tested but I am fairly sure that she also had it around the same time, she might have been the source of infection bringing it home from school, but I’ll never let her in on my suspicions.

Also, no one that I personally know has died from the infection. I had one co-worker who had her brother and a cousin die from it.

Several of my coworkers and several people from church have had COVID. A big group of them last November/ December. Another group of them this August/September.

No one in my household or in my extended family have had COVID to my knowledge. I don’t know anyone personally who has died of COVID but know family members of coworkers who have been hospitalized for it.

We’ve been incredibly lucky - no one that I’m close to has had covid. A few distant relatives - a couple of my husband’s aunts, my sister’s in-laws (presumed. they wouldn’t test), a few friends of friends, and that’s about it. I don’t know of anyone at work. My kids don’t know of anyone at school. Maybe we’re just really anti-social!

I don’t think I know of anyone that has been hospitalized for it.

No one in our household has had it (that we are aware of) nor have any extended family members. However, it seems like nearly all of my friends overseas and a large majority of my friends in America as well have had it. I know one person personally who passed from it, early 50’s, maybe last May, and his mother died, too, which makes me think it was genetic predisposition somehow. Other than that I know of three others (friends or family of my friends or family) who have died, 2 women in their 60s-70s and one man in his 40s-50s.

A woman about my age (early 50’s) that I met a few years back but have been friends with on line since, contracted it this winter along w/ her husband. She posted on FB one day that she was going to the ER, posted the next day that they sent her home, and before the end of the following week she was gone. Left behind her husband, two sons in their 20s (one of them married w/ 2yo twins), and a bunch of shocked friends. I hadn’t seen her in years but her death shook me to the core. Right around my age and she was gone.

One of dh’s good friends lost both of his parents in the span of a week. His mom was sedated in the IU when his dad passed, and she followed a few days later never knowing. Their wider circle of friends heavily lean towards the “this is all a hoax” school of thought about the virus, …so the silver lining to their friend losing his parents was that a bunch of them all dutifully went and got their vaccinations after the double funeral (although dh was one of the few that were masked during the service and afterwards).

Thankfully we have been lucky. No one in our immediate or extended family have had it (that we know of), although some friends (all healthy, late 40s/early 50s) have had it and three of them have had varying struggles w/ Long COVID.

I only hope that we can all remain safe and healthy until this all gets better under control.

My sister got it after dose 1 and before dose 2. Her son had had it earlier before the vaccine was available for teens. But they were months apart.

A niece from a different sister got it after being fully vaccinated and traveling to Jamaica with her boyfriend, who also got it.

All of their symptoms were mild and tolerable and relatively short lived.

However, I know of three people who died - one in the first months over in Spain. She was the mom of an acquaintance. Two more recently just died - moms of acquaintances again. One wasn’t vaccinated but I’m not sure if the other one.

So far, my grandmother, who was asymptomatic, is the only one to test positive. I know of no other family members who have had it. Some acquaintances and people I know have had it. One woman at my church who works in our children’s ministry, her DH just died from Covid complications after months of being in the hospital.