May 4th falls on a Wednesday this year, and I’m wondering how crazy Hollywood Studios will be with potential Star Wars “May the Fourth” excitement. The Crowd Calendar currently lists May 4th as a 4/10. That seems too good to be true, so I’m a bit hesitant to trust it.

For context, my other option will be to go to Hollywood Studios on Monday (May 2nd) which is currently listed as a 7/10 on the Crowd Calendar.

According to Touring Plans’ historical data, May 4, 2021 wasn’t too crazy at Hollywood, but with COVID, attendance was down all around, so I can’t really rely on that data. Should I just trust Touring Plans’ prediction that Monday will be a 7/10 and Wednesday a 4/10?

Last year, May 4th was CL 2 overall, with CL 2 at MK, HS, AK and CL 4 at EP… Somehow, with all the craziness of this very busy mid-winter/spring, I would expect more than a 4/10 for HS on the 4th, especially with the hoopla of the Starcruiser actually “cruising.”

Apparently everyone will be in MK on May 4.
It just went from a 5 to 10/10.
Clearly they need a better appreciation of SW

Apparently, Disney IT is hiding under their desks.
This morning I made ADRs for May 4.

But now, even though I logged into MDE and followed the same steps, I can’t even bring up May 4 to see what’s available.

Clearly, they should not be too proud of this technological terror they’ve constructed.

I just got updates, overnight, from TP on all my trips WDW/UO/DLR. So… check your crowd calendar to see if it has changed.

As such, I don’t really think May the Fourth to be that much more crowded than any other day at HS.

As for crowds there on May 25… sure. That could happen too.

Yeah my UOR dates are now rockin’ solid 7s across the board.
Unleash the dementors!

That’s an interesting take, and I see what you mean. However, I would expect the crowds to be driven more by Disney’s marketing / special events / commercial efforts than anything. I would expect them to use any excuse (like May 4) to get some extra excitement (and cash) from the mild SW fans. But I would hope that you’re right, as that would make HS a better option for that day. I’ll keep an eye on special events and see if there’s much buzz.

I’m pretty sure that last year there was some guest-generated buzz around being there for May 4 but nothing official or events done by Disney.

Alright, good to know! Thanks!

Mind you last year was last year. My notes say that all parks were CL 2 except EPCOT was 4.

Someone suggested that this is because MK is closing early on May 3 for a CM event.

Thanks for responses! Will likely change to another park.

I should change it… but I’m hoping that when we get there around 7:30 PM that the crowds will have dissipated…

Thanks for the information! Do you believe this 10 crowd level is accurate? This is totally ruining my plans

It has definitely thrown a wrench into my plans as well.

It’s hard to say how accurate this particular Crowd Level 10 will be.

There is definitely a certain margin for error in Crowd Calendar predictions. This post from a month ago gives an interesting example of how that might look in a given week.

However, there’s no question that early closures at MK cause crowds to gravitate toward the other parks and away from MK on the day of, and also increases MK crowds the day before and after, so I would trust TP to be close.

I was able to find one really comparable example of a past MK early closure when searching the forum, and I used TP Historical Crowd data to take a look. 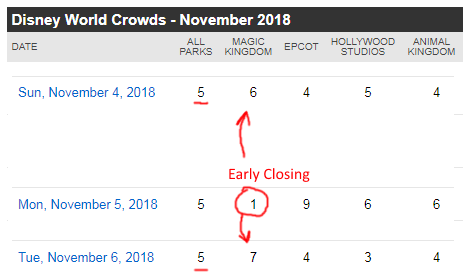 Notice that MK was the busiest park the day before and after the early closing. The day after this 2018 early closing was an overall 5 at Disney World. This is also the prediction for May 4, 2022. So maybe this gives us reason to expect something like a 7 (like in 2018) rather than a 10 (what is currently predicted). Here’s more data on the day after that early closure. It shows you that TP predicted MK would be a 5 the day after, and it was actually a 7. I’m wondering if they’d rather be wrong the other way this time around. There are a few more factors:

However, looking at all of this, my thought is: If the overall crowd level really is a 5, I think I would prepare for MK to be at least an 8 on May 4. But I think I’d be surprised if it was a 10.

UPDATE - Something I hadn’t considered. Something that differentiates upcoming May 4th from my 2018 example is that May 4, 2022 is a day for extended hours in MK for qualifying guests. Factoring that in, I could understand why the crowd could be closer to 10 rather than the 7 or 8.

So I’m there this whole week. I’ve decided to go to MK on May 3rd then hop some where or do a special dinner. I will do AK on May 4th then hop to HS after hopefully stacking some LL. Hopefully this works in my favor but who knows.