“The Ocean chose ME!” A DCL Trip Report

Sorry the cough is worse but I’m glad everything else seems to be improving.

No fair having to work when you are sick! Hope you feel better soon.

No fair having to work when you are sick!

Meh, it wasn’t hard, just required waking up when I had finally gotten into the best sleep of the night. Murphys Law and all that

@OBNurseNH did you talk about tipping and I missed it? If not, would you mind sharing what you did and what the included gratuities were? My plan as of now is to bring cash to tip extra as needed.

I can do that. I’ll be doing some work this afternoon.

As we have learned in other threads around Forum, tipping is a very personal matter, and I just want to make the disclaimer that I am sharing what I personally did, and not expressing expectations or passing judgment on those who do more or less than what I did. I am not open to debate about the custom or appropriateness of tipping vs wages; I am simply sharing my experience.

There is an option to pre-pay your tips. This is, to me, the easiest way to make sure things are covered at least at a basic level. My tips were prepaid for all applicable categories to which this applies: stateroom host, head server, head waitstaff, and assistant waitstaff.

The day before your voyage ends you will receive a receipt for any prepaid gratuities as well as envelopes for your use. These are used whether or not you choose to provide additional gratuity. The form with the receipts is perforated; tear the receipts off and place them into the provided envelopes, and hand deliver them to the appropriate individuals during the last time you see them on the ship.

If you choose to provide additional gratuity, enclose this with your receipt as well. I added cash gratuity in an amount I will not share except to say I used the prepaid gratuity amounts as a guideline for what to provide as extra.

I also provided cash tips at the time of delivery for both of my room service orders.

I provided a cash tip as well upon arrival at the port to the porter that took my luggage.

Know that for beverage service throughout the ship, an automatic 18% gratuity is already added. You may, if you wish, add additional gratuity to this amount, which I did each time.

Automatic gratuity is also added to both adult dining locations (Palo, Remy) and again you may add additional gratuity as you see fit.

Does this answer your question? If you have a more specific question please don’t hesitate to ask. I’m speaking broadly here because I am not sure if there’s something specific you’re looking for.

Thanks, yes, that helps. I was trying to figure out when to add the extra to the added/pre-paid tips. I was also thinking for drinks and stuff, I’ll probably just have a cash to add a couple of bucks as needed. I understand the added gratuity, but I think of cash staying in the hands of the service provider (maybe even untaxed, which they might appreciate), so it’s good to know that it’s ok to just hand them some cash or add to the envelope.

Again - in the knowledge that everyone has a different feeling about tips.

pre-pay your tips. This is, to me, the easiest way to make sure things are covered at least at a basic level.

What I like about pre-paying is it is part of the industry standard and I am okay with that. But with that behind me, I can then tip additionally (or not) based on service.

Not every line uses envelopes this way BTW. I pack envelopes and blank notes in my cruise packing items.

I have spoken already about Remy, which is the pinnacle of upscale dining on the ship. Now I’ll share thoughts on Palo!

Palo is also an adults-only (18+) dining experience available for an upcharge. For the prix fixe menu it is $45 per person. This affords you the ability to choose between a few different options for each course; you can also go a la carte which is appealing if you want one of the items that is not part of that prix fixe menu. It is worth your while to do a little table math; for me it was only an additional $5 to go a la carte in order that I could enjoy the Osso Bucco which I was after. 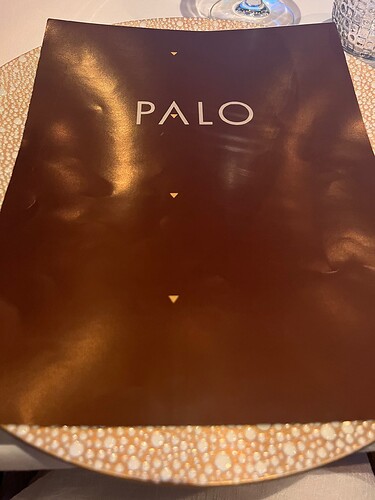 We were a group of 10 who all had reservation times spanning roughly the whole hour between 7pm-8pm. One of the group was kind enough to ask the restaurant guest service team if they might be able to merge our reservations so that we could sit together. They were more than willing to accommodate the request, though it moved our dining time up to 6pm. A little earlier than we wanted, but the good thing was that it allowed us to see the show that night, Beauty and the Beast, which was so fantastic!

Palo is located on Deck 12 aft, and getting there is a little bit of an adventure. You either have to approach from below, through Cabanas on Deck 11 and go up the stairs there, or from above on Deck 13 and go down the stairs. It was a little tricky and a number of us got lost (and frustrated!) on the way there, but eventually we all made it.

We were shown first to the beautiful chandelier which is made of murano-style blown glass in the shape of various types of pasta. It is stunning! 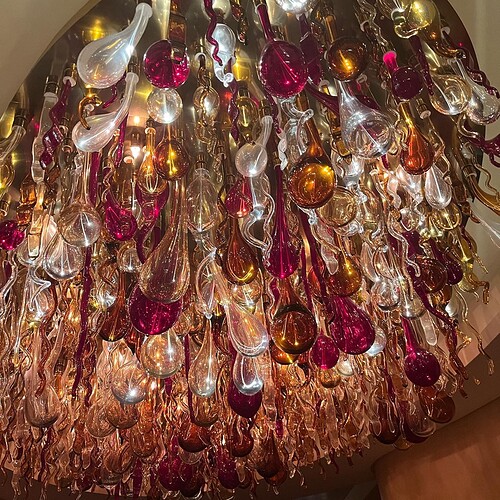 Our host also explained the origin of the restaurant name. Palo means “pole” in Italian, and the name evokes the image of the poles in, for example, Venice, where gondolas tie up. There is a decoragive pole of this sort on the body of the wine cooler which itself features individual little gondolas in which each bottle of wine rests. Our host joked that, in the event the ship would sink all the wine would float. 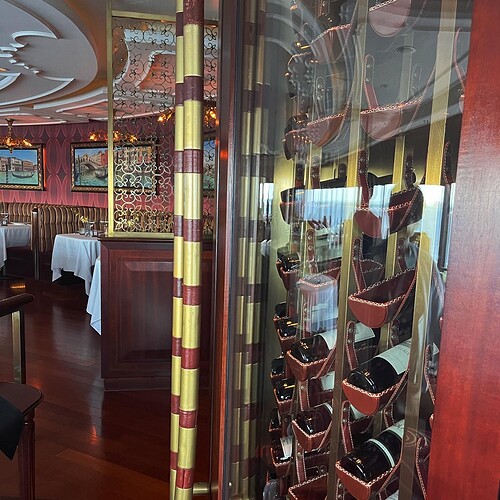 The restaurant is intimate, with a small number of tables, and is gorgeously decorated. It is bright in the main part of the dining room, which features large windows looking out on the ocean. 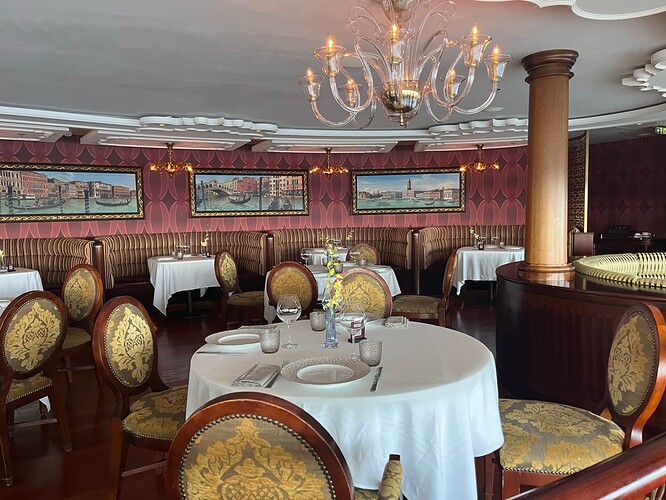 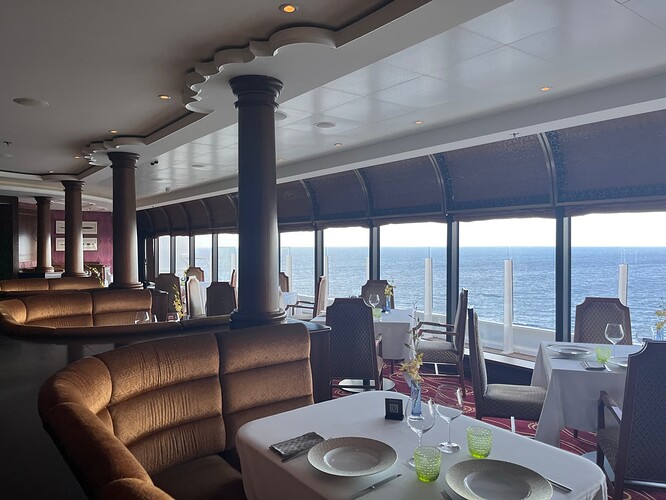 We were shown to a private room, all our own. This table could easily seat 12, perhaps even 14, and we were quite comfortably spread around as a party of 10. It was cozy here and quite private; we felt like VIPs! 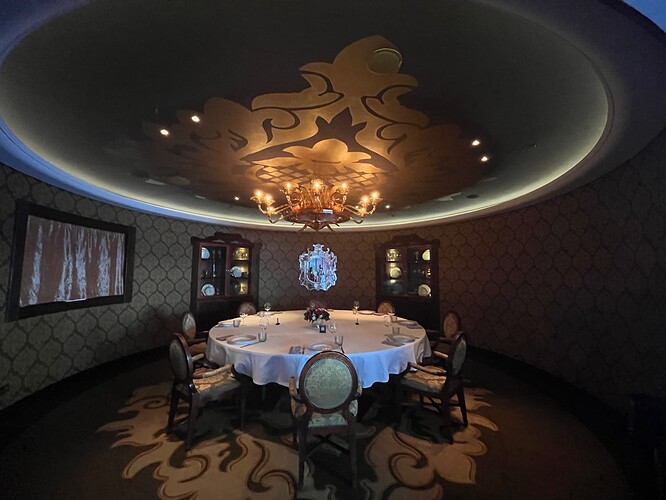 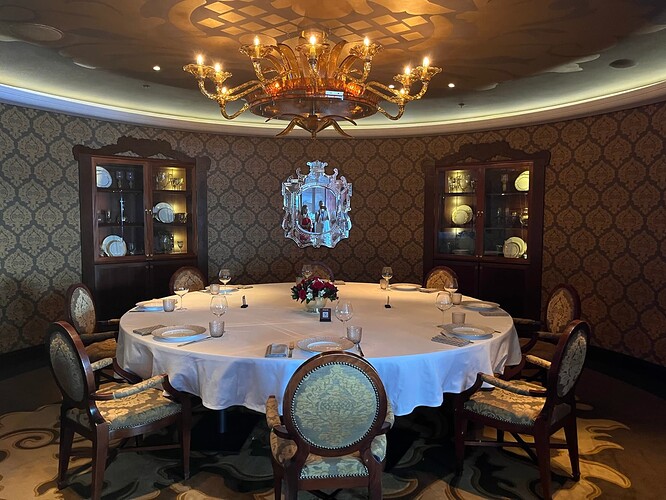 I started off with one of the restaurant’s signature cocktail, the Balsamic Grande. This sounds like a strange combination of flavors, made with Grey Goose Vodka, 5 yrs aged Balsamic Vinegar, and fresh muddled strawberry, but it works! I had heard about it on the podcast that @PrincipalTinker recommended to me and the team raved about it. They were so right! Highly recommend this! 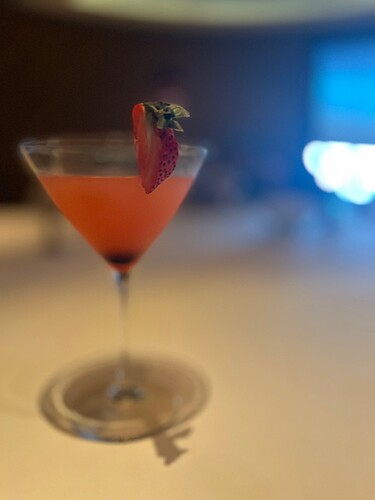 We were served an amuse bouche which was a gnocci on a sort of mushroom soup. I failed to take actual notes so I’m going from memory here. I do remember it was delicious! 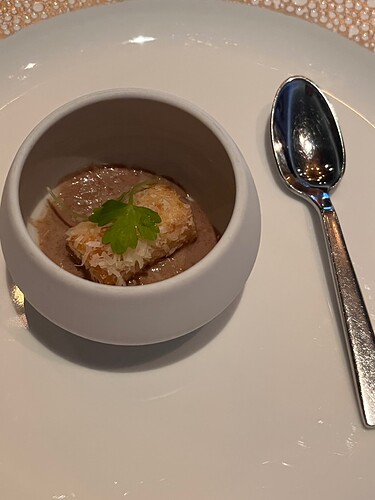 Next I enjoyed the buffalo mozzarella and heirloom tomatoes with more of that 5yrs aged balsamic vinegar and pesto. Magnificent! I would love a bowl of the vinegar. The mozzarella was so fresh and had the perfect consistency and the tomatoes were very flavorful! 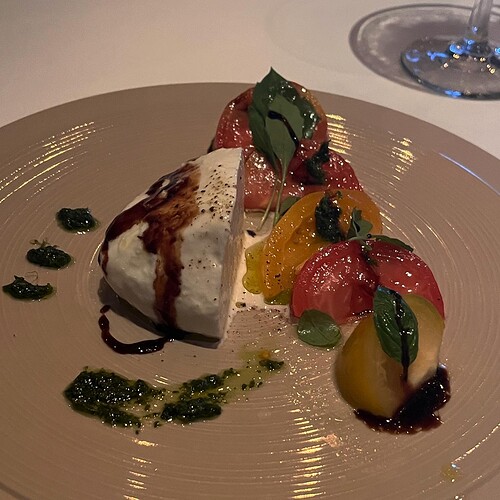 I enjoyed a salad between the appetizer and my main course. No photos, nothing to say about it. It was salad

As mentioned, I had the Osso Bucco for my main course, which was served on risotto. It was so perfectly prepared; no knife needed here! Absolutely delicious. I also had a glass of red wine, Summus Banfi 2014. It was very nice and complimented the meal well! 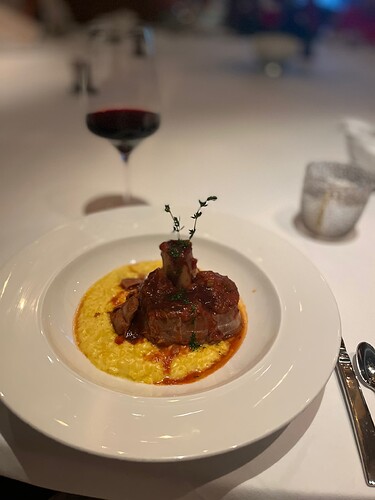 For dessert I enjoyed - and I do mean enjoyed!! - the Chocolate Souffle. This needs to be ordered at the time you place the rest of your dinner order as it is made to order and takes roughly 30 minutes preparation. It is served with a vanilla and a chocolate sauce, and you’re meant to pierce the souffle and pour in those accompaniments for best effect. I did not have many desserts on the ship. Largely I am not much of a dessert person, and I tend to find that mass produced desserts such as at WDW and on cruise ships to be very underwhelming and not worth the calories. This was the total opposite of that and was unbelievably well done. Chocolatey, warm, moist, and yet not overly heavy. I wish I could have this one again!! 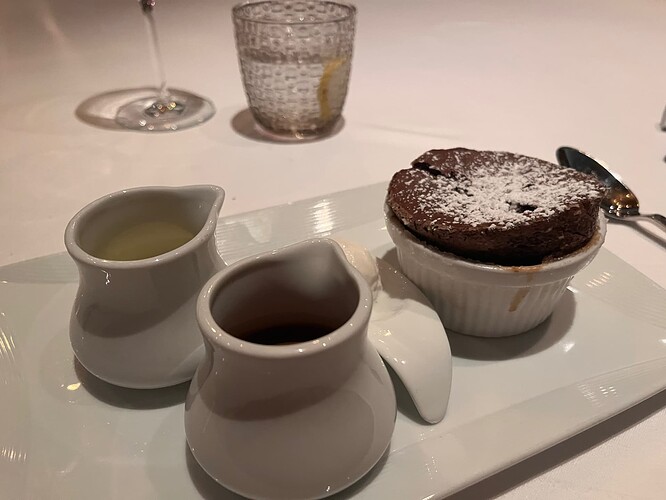 After dessert we were served a little treat. I can’t remember the specifics of what this was but it was sweet and tart and delicious. And so cute, too! 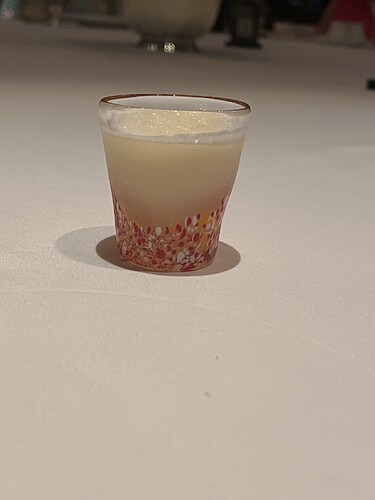 This was a really nice experience, and well worth the small upcharge to enjoy it. It was not the same kind of experience as at Remy, two nights later, but it was more accessible in terms of menu too. I could see doing this with my picky family in the future; Remy is not something they would enjoy at all, on any level. Our server at Palo was engaging and charming, and talked us through every course explaining what we were enjoying, how it was prepared, interesting notes on the ingredients, and the like. He was attentive but not intrusive and made sure we had everything we needed at all times. Some of our group really wanted to be at the show before it started, and he worked hard to make that happen. He graciously provided us with 10 separate checks and every single one was error-free.

If you’re looking for a special night out during your cruise, but are being either budget conscious or are not especially adventurous with dining, this is the perfect option for you. Bring a group and try to get this special room, too, for an added feeling of exclusivity

Now there are Photos! Thank you

I can’t access the photos from my computer, and I refuse to write anything of substantial length on my phone. So, write, then edit to add photos

I am the same way.

Not every line uses envelopes this way BTW.

Really? Which lines do not? I’ve always had envelopes given to me on my sailings; it would be important to know when I should bring my own!!

We did not get envelopes on NCL. I knew to bring my own envelopes from cruise critic. The cruise line wanted us to electronically submit all tips. I wanted to increase the likelihood the steward got her own money.

I also don’t remember envelopes on Carnival or Princess now that I think of it. But since I brought my own maybe I just didn’t look for them.

I also don’t remember envelopes on Carnival or Princess

Definitely had them on both of those lines, though it’s been a minute since I sailed them. Those two and Royal are the other lines I’ve been on besides DCL.

DH says no envelopes 2019. But does he really remember them not being there or just that we didn’t use them

So yeah, my info is old info.

I just asked on cruise critic and they said if you want envelopes you ask for them at customer service.

We really do need to do dinner together sometime. This looks great! I’m not a cocktail guy but that balsamic concoction even looks good.