Can somebody explain the Cinderella love?

I don’t know. For me, it is about the fact that Cinderella is kind of a unique princess. Incorruptible of heart, in many ways. So many of the stories have a flawed main character (which is all fine and well, and that is very compelling as well!), but Cinderella is this person, beaten down over and over again who triumphs, while ever offering grace to even those most undeserving of it. In the end, she is rewarded for it.

The story has been told and retold in countless ways. But in the classic Disney movies, for me, anyhow, it stands alone in that uniqueness.

I don’t disagree with your points - that’s a classic line - but it just doesn’t appeal to me as much as Little Mermaid which I picked, or Aladdin or Lion King. It’s my sister’s favourite though.

As good as Beauty and Beast by Disney was, this will always be the TRUE Beauty and the Beast for me… 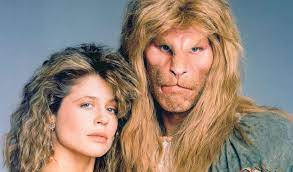 Okay…now wait a minute. I wasn’t implying anything kinky or anything. Just that I loved that show!!!

That made me chuckle. Also not implying kinkiness–that photo is just funny to me! The prosthetic work, or whatever that is, specifically.

Forgot about that show.

Maybe the Beast is John Connor’s father which will solve the paradoxical time loop issue of it being Kyle Reese from the future.

I knew I was picking underdogs, but in some cases I was surprised (after voting and then seeing the results so far) just how underdoggy some of my choices were.

So I’ve seen nearly all of these. I think the original Wreck-It Ralph and Zootopia may be the only ones I still need to get to. I work for a trivia company, and I’ve written and edited a number of Disney quizzes that used this exact list (the one on Wikipedia) for the scope, so I’ve gotten to a few more each time we need to produce new content. It’s kind of fun to watch these in order, too, to see the development in structure, narrative, and character development, as well as the obvious technical improvements.

And so for the first batch, I picked Alice in Wonderland. I didn’t realize how much I loved Alice until, at the end of our weeklong trip in March, I discovered that all the film-specific souvenirs I’d gotten were Alice in Wonderland. All of them. Pins, ears, Loungefly bag. It hadn’t even been intentional. I just looked at what I was packing in my suitcase, and that’s what I had. So I guess I have a favorite.

In the very diverse 1970-1999 group, I am currently the sole vote for The Hunchback of Notre Dame. I knew there wouldn’t be many votes for that, but I didn’t know I’d be the only one. The top four in that category were what I’d have predicted. And they’re great movies, but they’re all so…omnipresent…that they don’t feel fresh to me. And I need a bit of freshness in my favorites. The other ones I considered were Mulan, Tarzan, and Hercules. Along with Hunchback, kind of the B-Team of the '90s. And I’m okay with that.

When that group got split up, I picked The Fox and the Hound for my Dark Ages selection. A movie that makes me cry that much wins points.

Lulls: I mean, I love the longshots, and even I couldn’t go with anything other than Emperor’s New Groove or Lilo and Stitch and knew they’d be top two by a wide margin. (I picked ENG.) Much appreciation for anyone who voted for something else in that category. The other movies need love… I just couldn’t give it to them.

Latest Hits: I’m back with a dark horse. Frozen II all the way (or most of it). It was just so darn well-thought-out. It’s a puzzle movie, and the main antagonist is in the past, but there’s still drama and conflict, delightful characters, great songs, and such a beautifully complex storyline that appears confusing at first but unravels at exactly the right pace. I like the original Frozen just fine, but I loved this. My second choice would have been Moana, and not just because of the soundtrack. The current top vote-getters are all good movies; it’s a category with absolutely no wrong answers.

As for the Classics, having rewatched all of them recently as part of a family challenge to watch all 60 Disney animated films, I think it’s clear that Cinderella was an inflection point. It incorporated all the best of the previous films: story-driven songs, beautiful animation, plenty of gags / humor, and a sympathetic main character. It’s definitely rewatchable for kids, thanks in large part to the mice and their gags. I agree that Cinderella’s kindness and grace makes her one of the best heroines in Disney lore.

However, Sleeping Beauty is Walt’s masterpiece. It was the height of the craft of animation. Everything before was used as a learning experience. After Sleeping Beauty, the studio turned to xerox processing which seriously deteriorated the quality of the animation (101 Dalmatians being the first example).

The animation, which is sort of a medieval tapestry style, is simple but unique and beautiful. Aurora and Phillip (the first prince with a personality) are Disney’s first and best power couple. The fairies are hilarious, I seriously get such a kick out of them every time I watch it. Maleficent is the Disney villain - none before are after have come close. And as I mentioned up thread, George Bruns’ score based on Tchaikovsky’s music for the ballet of the same name is absolutely brilliant.

All this adds up to making Sleeping Beauty my favorite Disney film of the Classics era, and second only to Beauty and the Beast of all time.

Have you seen the making of on Disney+? It was crazy how much that movie changed as they were writing it.

This has its moments (the Mad Tea Party is my favorite), but I am not a huge fan of the vibe. It drives me a little crazy.

The Hunchback of Notre Dame

In any other universe this would be the winner. But the 90s bench was very deep. All amazing. The songs for Hunchback are some of my favorites of all time (Stephen Schwartz + Alan Menken!!!

). Mulan, Tarzan, and Hercules are mostly just a lot of fun. We were so lucky in the 90s.

The Fox and the Hound

I watched this last night and it was fine, but not stellar. “Best of Friends” is a great song though.

I absolutely adore the music in this movie. It would be my second choice after Moana for this era.

It was crazy how much that movie changed as they were writing it.

That was a very interesting insight into the creation process. It’s actually not far off from the way all the Disney animated films were made - an iterative process. Computer animation has let them make changes closer to the release, so Frozen II is an extreme example. But even going back to Snow White they were adding in / deleting scenes as they went.

Maleficent is the Disney villain - none before are after have come close.

Not sure I disagree, but what are your criteria here? Or just overall in a class of her own, no criteria necessary?

I agree 100% with everything you said about Sleeping Beauty. It’s definitely my favorite Disney movie of all time.

Here’s the thing for me about Moana. It was fine. I even enjoyed it. But entirely unmemorable. I can barely tell you anything that happened in that movie, other than a few broad strokes. This suggests it just didn’t connect, for me. There is only one song from it that I can recall the tune from memory.

So, I just can’t put it as a top choice. Maybe if I watched it again? But…it didn’t resonate with me enough to actually give me any desire TO watch it again.

I haven’t seen Frozen II. I will, eventually, and perhaps if I did I would rank it highly…but while I love the music to Frozen (as well as the “twist” of a sister’s love), the over-arching story felt weak…so much so that it hasn’t really driven a huge desire in me to see Frozen II.

It’s just based off instinct.

But here are some axes on which she is the best / baddest:

didn’t connect, for me

Everyone has different tastes. That’s what I love about these polls!

How is this the best? What am I missing here?

The nostalgia, for me, of watching this on the daily with my DD (want me to say the whole script? I still could!), meeting Cindy on our first family trip, and seeing DD’s magical moment interacting with Cindy from afar during MSEP

And don’t you dare tell me that’s the wrong way to decide on my vote. It’s my vote.

This is like picking your favorite child!! No way, too difficult!

Sleeping Beauty was the first princess movie I let my kids watch. It’s a magnificent tale.
The first three really are the creme de la creme (a la Edgar?).

My youngest daughter’s middle name is Aurora. Sleeping Beauty definitely has a special place in our hearts.