No child should be deprived of such a beloved character!

I know. He stole the movie like Loki does in anything he’s in…

I picked
The Sword in the Stone because it’s just so fun and remembering it makes me smile.
Beauty and the Beast because of it being the first time they used computer technology in an animated film for the ballroom dancing scene. Pivotal shift in how animated movies are made. Although that scene in The Lion King when all the wildebeests were stampeding over and down the hill was also amazing. It was practically live action life-like
Meet the Robinsons - probably my most favorite animated movie ever in the creation of movies.
Moana - this category was the most difficult for me. I went with Moana because of the story. Was it the first princess movie without a prince? The movie is just so empowering. Especially for girls.

Oh man, that was the first vacation trip I ever took that wasn’t to my grandparents’ bungalow upstate NY.

My Mom & sister went into full on vacation ensemble shopping for us.
I LOVED that shirt - even though it was ITCHY as all get out.

For the record, they had Friar Tuck too! I know Robin was there but I didn’t get a picture and I think Little John as well. 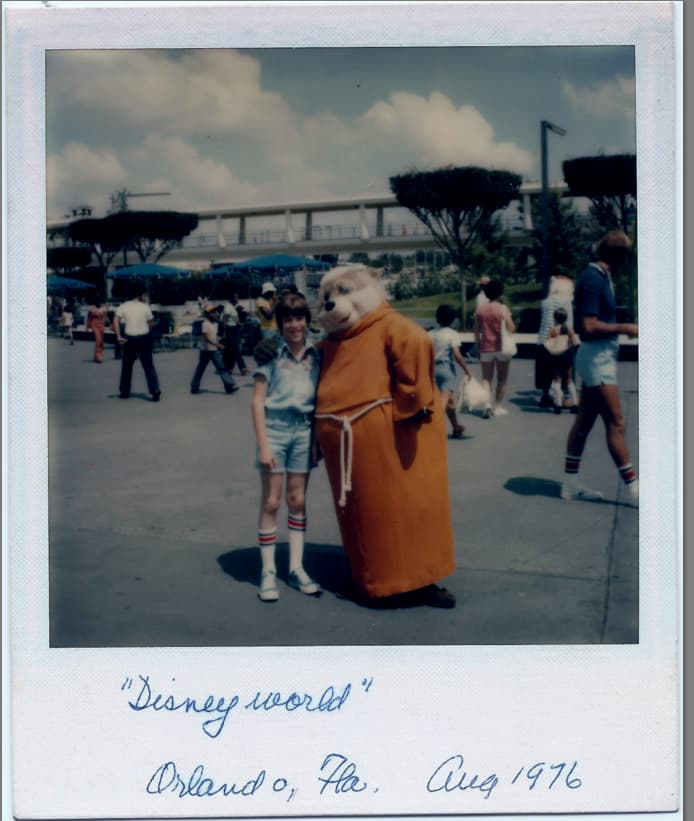 I don’t understand this statement. At. All.

Meet the Robinsons - probably my most favorite animated movie ever in the creation of movies.

Awesome!
It’s such a good movie. I can’t say it’s in my absolute favourites, but I’m happy to see it getting so much love!!

that early explosion scene though. wrecked my heart. and the whole movie has that tragedy as an undercurrent. I love Baymax. And I do love the movie overall. But I couldn’t pick it as “best”

as all get out

you’re such a Long Islander! I haven’t heard that phrase in ages!

Ha! I don’t think I even realized that might be a regional phrase.

you’re such a Long Islander! I haven’t heard that phrase in ages!

We definitely say it down here in NC.

Same in WNY.
Haven’t been in SC long enough to verify it’s not just my family saying it.

Don’t think it is regional. I remember my grandparents using that phrase, and they were from the Michigan/Ohio/Indiana area. Still, I don’t hear it terribly often any more.

and the whole movie has that tragedy as an undercurrent.

Seriously, I get it. But for me, that tragedy serves as strong motivation and emotional pull. It makes it more compelling as a result.

Magic that helps one specific person go to a party, where she meets someone and falls in love at first sight, and causes such an obsession that a dude goes through a whole kingdom stalking all girls of the same age and demanding to see their feet? Music that almost recycles Snow White?

How is this the best? What am I missing here?

She’s beautiful and resilient with a joyful heart despite the great injustice. She radiated such qualities the prince had to see her again.
Actually, I feel very much the same about Snow White.
I just find Cinderella more repeatable.

The Sheriff does have meets, at Oogie Boogie Bash at Disneyland. No child shall be deprived, as long as their parents cough up the extra money for the party!

I should have suspected…

Can somebody explain the Cinderella love?

I think there’s some WDW castle bias at play. Plenty genuinely love the movie for various legit reasons, but some regular WDW goers may feel an obligation to hold Cindy in higher regard as the princess who lives in the icon of the flagship park and extend that favoritism to the movie as well.

objectively speaking, Beauty and the Beast should really be the winner

This is correct and there’s no need for further clarification, qualification, or discussion.

Seriously, though - Beauty and the Beast is a masterpiece:

It was Oscar nominated for a reason! And it is very rewatchable / re-listenable, as my VHS and score cassette can attest.

Totally on the same wavelength with all these points on BatB and this is my clear favorite of all eras.

“problematic” due to Belle falling in love with her captor

While technically fair to look at it that way on the surface (one could argue she began falling in love around “Something There” which was before she saw Maurice in the mirror and was officially set free), I think Belle is amazingly perceptive and intelligent and isn’t really falling into Stockholm syndrome. But rather studying the Beast’s behavior and character on its own merits, independent of her prisoner status.

At the point she was likely starting to develop feelings (based on what she was truly observing in him and not out of dependency as a prisoner), he was no longer acting as a captor but as a host, and had his own genuine feelings for her not related to control of her as a possession or prisoner.

My take anyway. Interesting topic to think about.

This was a fun series of polls! My reactions surprised me for several of the categories.

I realized that I don’t know and/or like most of the Classics. I picked Cinderella because I have seen it the most and think it’s kind of cute.

The Renaissance was tough because I agree with @ryan1 that Beauty and the Beast is objectively the best but I also love Little Mermaid so much that I had to pick it.

I had to choose Emperor’s New Groove for the Lull because I have not seen any other movies in the category!

The most recent ones were the hardest to choose between. I went with Frozen because I think it is fabulous and I love the music. But Tangled just gets better every time I rewatch it. And Big Hero 6 and Zootopia are both brilliant. Any of these would beat everything but Little Mermaid and Beauty and the Beast overall for me.