I was traveling last week and didn’t keep up on my polling.

We actually had a winner in the Best Pixar Film poll in Round 3 - TOY STORY (1995)!!! It was the only option to clear 50%. I pasted the results at the bottom of of this post. As the film that started it all, it’s hard for me to argue against it. Coco and Inside Out were the next highest.

However, we still need a winner for the best Pixar Sequel poll. Finding Dory and Monsters University were knocked out. Please vote for one:

What is the best Pixar SEQUEL?

(It suddenly occurred to me that maybe we should include Lightyear now that it’s been released … but is it really a sequel?

Regardless, it will need some time to sink in before we throw it into a poll.)

Thanks everyone for participating! 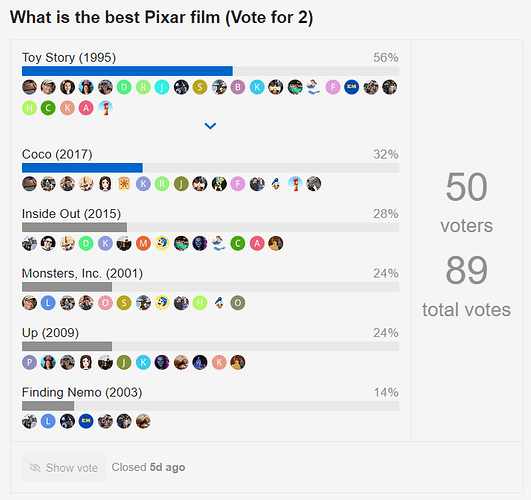 That was actually really hard to pick between.
I love both.
TS2 edges it though.

The inferno scene in 3 was traumatic so there is no way in Hell it’s getting my vote.

I remember TS3 being good…But I can hardly remember anything about it. TS2 was epic, though, with so many memorable moments. It is the clear choice.

I honestly don’t remember much about 2 other than the toy barn guy and the introduction of Jessie, but I’m voting for it based on my general impression.

Tour Guide Barbie.
The Jurassic Park nod.
The song about Jessie’s past.
Bullseye.
The references to Woody’s past life/TV show.
The way the Prospector convinces Woody that life in the museum was a better life.
The airport/airplane scene.
Mrs. Potato Head packing Mr Potato Head’s angry eyes.

Shall I go on?

What do I remember about TS3? The fire at the end, and…um…random toys from a daycare center? Maybe?

The song about Jessie’s past.

This alone wins it for me.

What do I remember about TS3?

The scene at the end where Andy hands his toys over to the girl. It’s what Married Life was for Up.

I refuse to vote

It has to be Toy Story 2. How can not tear up when you watch this scene with this song! 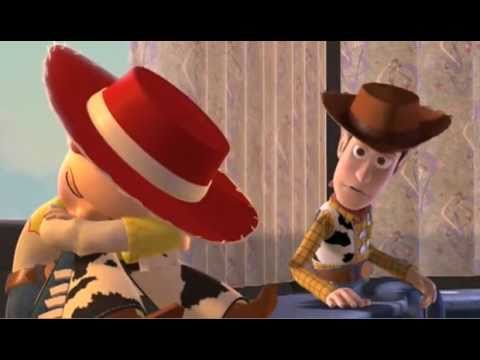 That song makes me cry even without watching the movie.

TS 3 - The look in their eyes and the resignation to go down together in the furnace was so well animated, i use it as a standard for all subsequent movies. The continuation even after being saved of leaving Andy just cemented it.

I can’t stand TS4 for leaving those characters with anything other than that perfect ending.

It has to be Toy Story 2. How can not tear up when you watch this scene with this song!

One of the best movie songs of all time!

No, Lightyear is not a sequel. If anything, it’s a prequel, but I don’t even think it is that. It’s more of a toy origin story.

If Toy Story was everyone’s SECOND choice, for example, but the first choice picks were split between the other movies, then in another round where you are given a single choice, Toy Story could, theoretically drop out of the running entirely.

(I don’t actually believe that is the case…just saying, the criteria of picking the one that hits over 50% only is really effective if there was only a SINGLE vote cast by each person.)

the fact that you allowed 2 votes means that, technically speaking, another round COULD result in one of the other movies taking a top spot

That’s why I set the rule in advance that the “first across the finish line” (50%) wins. There are lots of ways you could define victory, but I think this means that Toy Story is one of the favorites of the most people.

Lightyear is not a sequel

Well, I also included Monsters University as a “sequel” (a movie in a franchise that came out after another) even though it is a prequel. In that sense I think I would include Lightyear in a future sequel poll.

Lightyear is more like a spin-off, not really a sequel nor prequel.

Wow! This one is coming down to the wire!

Shocked that TS3 is in the lead.