Need ideas for a BIRTH ANNOUNCEMENT while @ Disney World

I am letting you all in on a little secret that no one, not even my parents, know. My spouse and I are expecting our third child. We just found out recently. We thought we were finished after 2 so this is going to be a surprise for our family and friends for sure. We go to Disney in 43 days. We thought we would try having another child we just didn’t expect to be so successful so quickly so we weren’t planning on being pregnant in Disney. My wife is going to have fun no matter what and we are going for the kids but I can’t help but think she must be a little bummed about not doing rides or alcohol at Epcots Food and Wine festival. She has also typically had very bad morning sickness in the past and I know this must be on her mind. I am trying to think of ways to keep her super excited and I thought it might be fun to use this trip as an opportunity to get some help at one or several character meets for a birth announcement. I was just curious if any of you had any good ideas for how to go about doing this. What characters might be fun to do this with(we are going to all the parks and MNSSHP so we can do almost any and all characters)? How should we make the announcement and what should be written on the sign. Any and all ideas are very sincerely appreciated. We have 2 daughters, ages 3 and 5 if that helps generate ideas. Also just FYI, we don’t know the gender yet. We asked for our first two children but for this one we want to be surprised. Thank you to everyone for the help.

Have a character give you a baby onsie is the most obvious one I can think of, but that’s kinda mundane.

The other idea is just let the character’s helper know and let them take it from there?

I am going to dump a few ideas I found here! Congratulations! 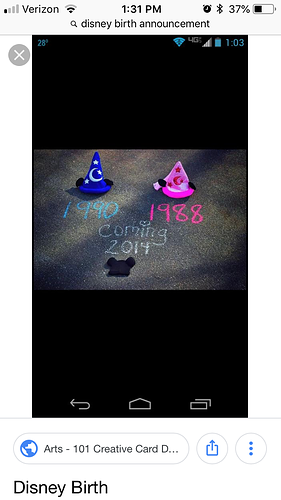 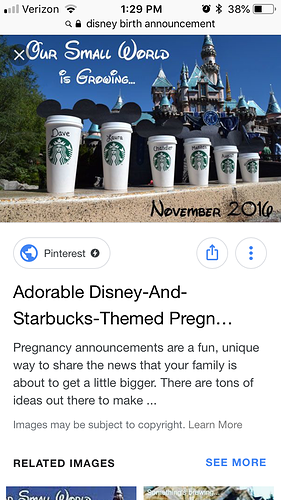 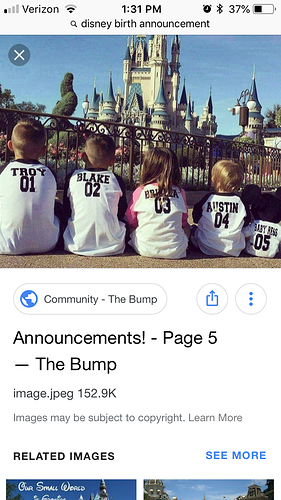 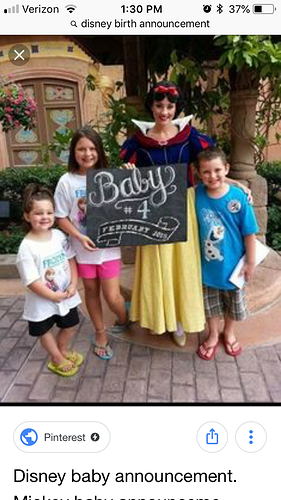 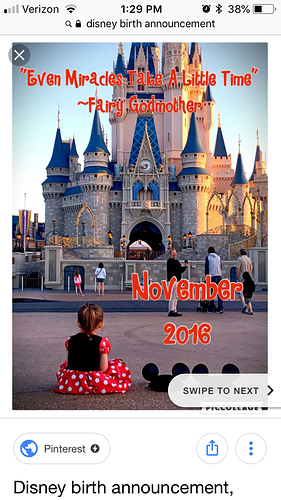 Congratulations!! May you and your family be ever blessed amigo!

And here I was thinking something more mundane, like, doing the meet and greet with mickey and having him put a collapsed ear hat on the (potentially nonexistent) baby bump… or having tink point her magic wand at your wife’s belly - with the look of shock and one hand over her mouth on your wife’s face.

Hmm. This gives me an idea. What if Big Hero 6’s Baymax listening to wife’s belly?

I don’t know. That could just be creepy.

Congratulations! We didn’t find out the sex for any of our three kids and there is nothing like that moment, after going through all that hard work, when you find out whether you have a new son or daughter.

I did an announcement for child #3 at Disney. My boys were 6 and 4. We had Mickey ears on them and the baby bump Not super unique but it made the point. Congrats!

Last week I saw a couple having a picture taken. They stood on the balcony of the train station on Main Street USA with their backs to the camera looking toward the castle. They both wore ears that said Mom and Dad on the back
Between them they were holding another pair of ears that said “Baby” on the back.

Congratulations! I’m not sure of the characters but the first thought that sprung to mind was to have a shirt made before the trip and then have your wife wear it for iconic pics. My shirt idea would be to have the Minnie ears and then a little set of Mickey (or Minnie) ears on the inside (I would use a glitter vinyl for this) Then maybe the month the little one is due underneath. 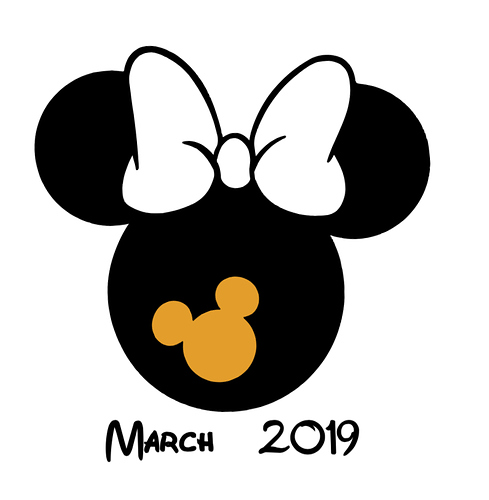 My daughter and son-in-law went with us on a trip to Disneyland shortly after they found out they were expecting. They had someone take their picture with the castle in the background, holding a Disney onesie between them. They posted it on Facebook with the message, “Our little Mouseketeer joins the club in November, 2016”. You could certainly adapt that idea for a character meet.

I’d probably go with one of the non-character options just because I have heard of limitations on what characters can do in terms of announcements and such. I’d hate to get something with a character all planned in your head and then be told that the character can’t participate.

Thank you all for the kind words. It is very much appreciated. Also, thank you all for the wonderful ideas. They got me and my wife thinking. We have 2 ideas we really like and several contingency plans. Our favorite idea would involve tracking down Genie. Does anyone know where I might track Genie down outside of MNSSHP? We are going to MNSSHP so if necessary we could track him down there but we will be in costume. Any tips on how to find him, especially outside of the party? Thanks