Now THIS is my kind of wdw day. I had gotten fpp to a science and could accomplish this type of day pretty regularly. Im super impressed w your genieing.

Another note - so far I’m not impressed with MB+. I bought it for research… but I don’t know that I’d advise clients to do it. The light up and buzzing actually are distracting.

Agree! And most of the time I have no idea what it’s trying to tell me.

It is fun for Bounty Hunter. Which upon reading further I see you discovered.

But otherwise pass at this time.

Love the TR! You are rocking it! I just got our MB+ but haven’t been in a park yet. I think you can turn off the vibration and lights in the settings. Maybe that would make it less distracting. Not sure if that would impact the bounty hunter. But you could turn them back on again if needed.

Thanks! I had no idea!

Glad I could help. Did it make a difference?

Epcot Day! The plan for today was simple enough that we didn’t need to rope drop - we were going to do another ILL for Guardians, ride Soarin’ again, do the aquarium, a late lunch in Space 220 Lounge, and then Food and Wine. We ended up with a lot more…

While we didn’t plan on doing VQ and ILL for Guardians, I wanted to be able to tell one of my clients exactly how to ride Guardians through all methods since it’s a top priority for her upcoming trip, so I decided to get a VQ also and take screen shots so I could talk her through it. Our ILL was for 11:45, and VQ Boarding group 67, which was estimating 2 pm, by which time we were planning on being well into Food & Wine so were just going to ignore that.

Got to park around 9:15, did Aquarium, Soarin, K did Mission: Space, then we went over for our Guardians ILL. Right as we got to the room where you board, our VQ was called - 2 hours earlier than expected. So we got to ride back-to-back, first with ILL, then went back in with Boarding Group. Got “I Ran” on first ride, and “One Way or Another” on second… so in our three rides this trip got three different songs, which was a lot of fun!

Had a little time before our Space 220 Lounge, so went to do Turtle Talk and then headed back to Space 220.

I was surprised to learn that in Lounge you can do any of the appetizers or desserts, or even order the full prix fixe meal… I thought it was just the lounge menu available (which doesn’t even have all the appetizers). We just wanted apps, but ended up getting ones that weren’t on the lounge menu - the burrata and the tuna tartare. Both were awesome!

Then it was on to head around - started in Mexico with my favorite from La cava, the tomato margarita. Soooo good. K had the Lily and said it was the best tequila drink she’d ever had. K and I did the Tequila tasting at Cava a couple of years back together with our DHs, so that was high praise.

Not much to tell about rest other than great food, good drinks (F&W has such sugary drinks it seems if you don’t do beer, so I didn’t finish a lot of them), and our feet are killing us.

We came back early (around 8) since it will be a long day tomorrow between AK and MNSSHP, and decided to hit the pool and hot tub for a bit to help our feet. That timing led to the last bit of our magic for the day… when we got back up to our room after the pool, we realized we could see BOTH Harmonious and Enchantment from our balcony, and both were just starting. So finished the day with that magic! 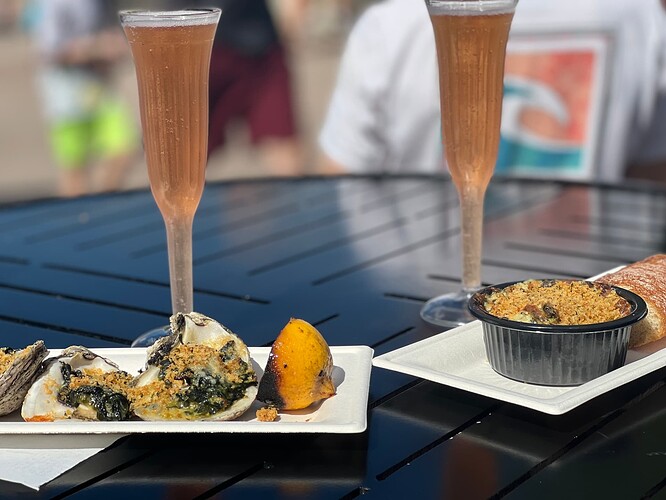 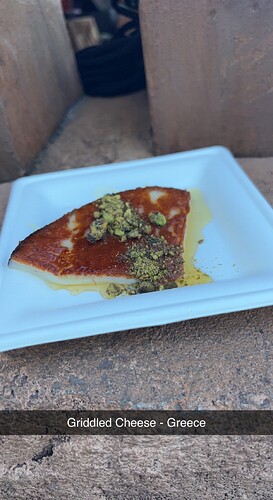 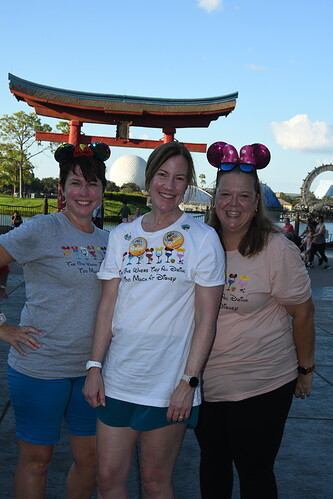 I enjoyed it! Fun to hear any kind of cast member tales.

Did it make a difference

Well, I didn’t see your reply until tonight, but I’m doing it for tomorrow, so I’ll let you know!

Lovely pic of the 3 of you!

could see BOTH Harmonious and Enchantment from our balcony

That is some Disney Magic!! 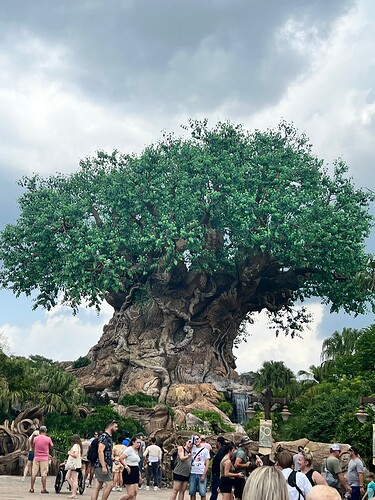 The Caring for Giants tour was amazing - this is the backstage Elephant experience. Our guide was Jake, and he was very knowledgeable and excited about his job! Took about an hour, we walked backstage, took a van even further, and stood behind one of the elephant areas while Jake told us facts, answered questions, and generally made us all love elephants more than we had. 12 people on our tour. We had four of the ladies there, and were probably within 30-50 feet of them. 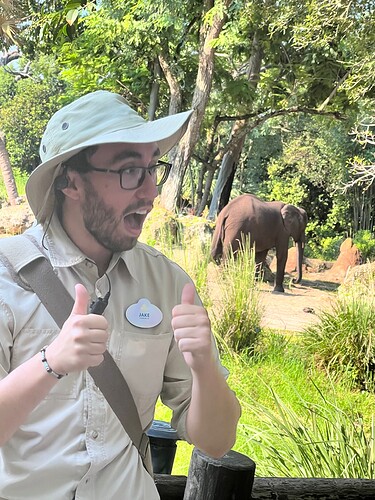 Today continued the trend of perfect timing as well. 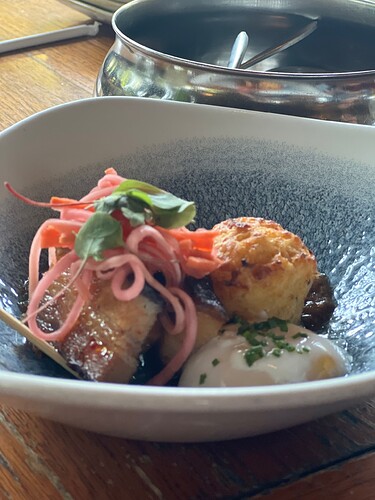 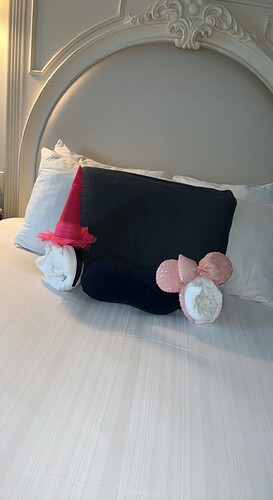 What a nice surprise! Hope y’all have the best time tonight! 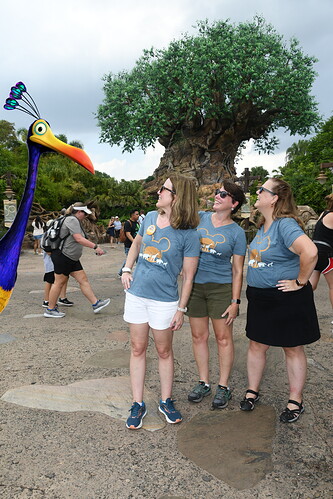 I am loving the matching shirts!

We are headed to airport (very very sad face), but we are happily exhausted due to our great night at MNSSP.

We arrived at the party around 5:45 with very few goals. We had ridden everything we wanted already, we were not going to be trick or treating or waiting for characters, and due to that, we had gone ahead and gotten a Be Our Guest dinner reservation for 6:25, as K had never been there.

The best part of this night was what we called “the bestowing”… a little background:

K’s mom passed away a few years back at this time of year. Since then, at this time of year, K does something that will make people smile in her mom’s honor. The last time we were with her for this was also at WDW, and she bought 15 Mickey balloons and handed them out to people who looked like they could use extra magic. She’s done other things in her neighborhood, but this year’s goal was that the three fairies would bestow blessings (in the form of light up fairy wands) to those who looked like they would enjoy it.

We had around 16 wands that K brought in her backpack… I was a little nervous that cast members might think we were trying to sell them, but we didn’t have any issues.

We started the “bestowing” after dinner, when it was dark and we could turn on the lights for a better effect. The majority were to young princesses… my favorites were when we found tiny Auroras… but the one that got the strongest reaction was actually to a mom. She walked up to me when we were on the way to Jungle Cruise, asking where we got the wands. When I said they were from outside the park, she said “Shoot, my kid would love that and I really wanted to get her one!” Of course, this is perfect for a Bestowing, so I curtsied and gave her mine. After protesting, she gave me a huge hug and said “Now I’ll be the best mom ever!”

The other goal of the night was to try to get K to get Galactic Hero on Buzz. I’ve gotten it, my DH has, her DH has, but she hasn’t. So we rode Buzz twice back to back with me piloting to get her turned to the right targets. Second time she almost got it - 957,700. Parade was starting 5 min after that, so we didn’t do a third time… but next time we make it here I know she will get it now!

Photos (while we were fresh)
Be our Guest dinner (was good, not great, but K & S both loved getting to see the ambiance)
Bestowing
Jungle Cruise
Buzz x2
Parade (watched from hub)
Bestowing
Fireworks (from Tomorrowland bridge)
Pirates
Haunted Mansion
Space Mountain

We walked out right at midnight as the last Hocus Pocus show was starting… with happy tears in my eyes… I’ll be back next April, so not too long. What a beautiful week. 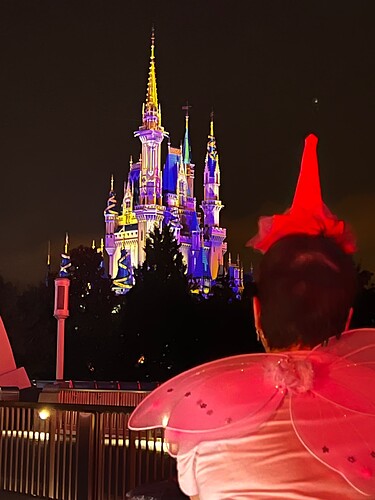