Keeping track of your plans? Tools?

What tools do you use to keep track of your plans? MDE is great for some things, but I don’t like all the scrolling to look at plans for each day. Touring plans ap isn’t the prettiest either. I use the TP site a lot, but not loving the ap. I am tempted to use excel. Is that crazy?

I use OneNote. I have my whole trip with maps and info and TPs in there. One page per day.

This is one of our days.

You make me swoon

What’s the likelihood of wifi going down at the parks these days? I hear of it from time to time but how prevalent is it, really?

WiFi is flaky at best. The more people using it the slower it will be.

I don’t use public WiFi, though.

Aren’t you supposed to be napping?

So you just use your cell plan?

Yes, we have unlimited data, so I use it. Just a tad more secure.

Oh, I’m sorry you can’t get comfortable. But it’ll be a great day nonetheless!
We don’t have unlimited data, because there’s no competition for carriers around here and so the plan pricing is confiscatory! I think, though, for our trip to Disney I’m going to upgrade for a month. We’ll be traveling from NC to MD then back to NC, then FL- pretty much the route you’re on at that point

, so we’ll need lots of data that month anyway.

I tend to use hard copies of my notes more than the electronic versions, just because it’s easier, especially with 5 of us, we can just pass it around so everyone knows what the plan is. Usually I have my TP and a park map together. It’s easier to see than my phone in the daytime at the parks, too,

But with the Fps, I can’t see not having tons of data, even if I don’t keep my notes on the phone.

I use Excel and have been doing so for years. I really like the fact that I can go back and look at the spreadsheets for each trip. Of course, the spreadsheet has grown over the years and is now huge! One tab has the touring plans for each day, and I also save these individually as jpgs and use the relevant one as lock screen on my phone each day. That way I just need to wake my phone up to see what the plan is.

For the individual plans for each day, I also create a Word document (saved as pdf when complete) with one page for each day. This gets blutac-ed onto the door each evening, so that DH and DD can easily see what we’re doing the following day. Attaching an old example in case anyone is interested. 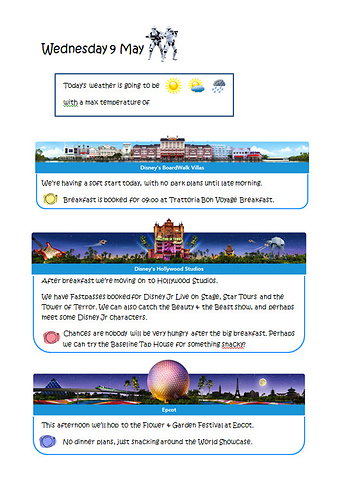 This probably sounds a bit over the top, but I’ve been doing it for years, and use the old files as templates, so it’s actually really quick.

I have multiple methods, one is my brain (not reliable), the other is an excel spreadsheet that I tack onto the fridge in the room and the third is a pocket guide that I fill out manually, fold up and carry with me in my back pocket. I’m happy to share the excel and photoshop files if anyone wants. 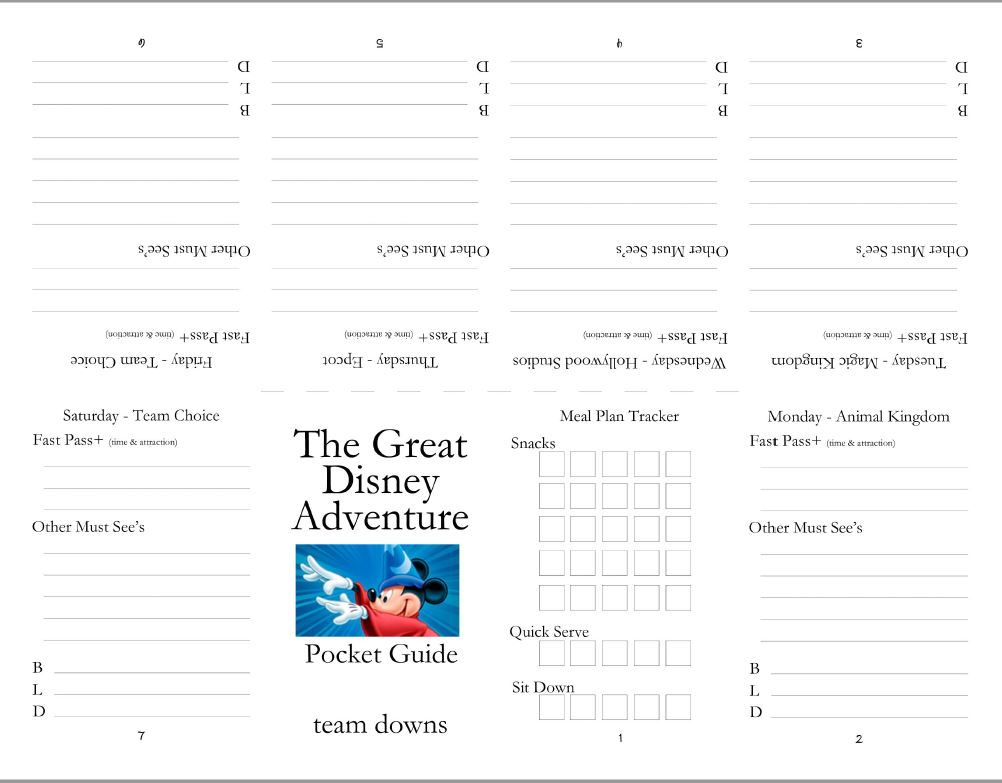 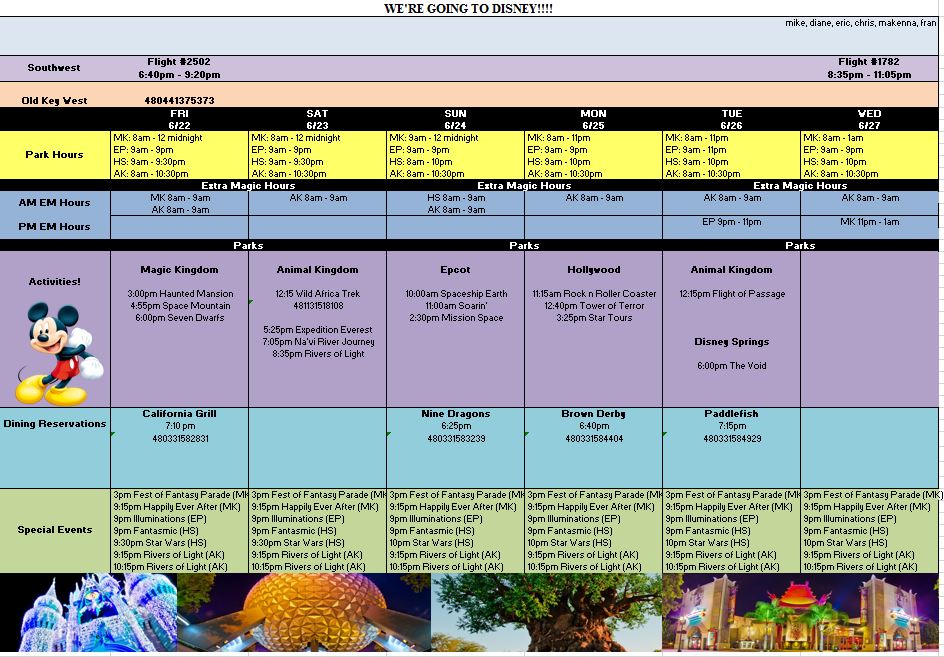 Well, for PLANNING, I’m using Google Sheets, since I can then access it from any device, including my phone.

For actual days in the parks, honestly, we don’t really use much of anything, other than to confirm FPP. But I think for our upcoming trips I might change that since we’ll be going at times which are busier than we’ve had in the past. What I EXPECT to do is actually put key items/time in our Google Calendar and just use that. I have a widget on my phone screen that shows the schedule without even having to open the calendar app. We’ll see, though. Not decided. I would just use that for ADRs and FPP, though.

Honestly, I fear that if I have the actual PLAN to reference, I’ll start to feel kind of obligated to the plan, which can steal some of the magic once I’m there. So, I think it would be more like a “play it by ear”…which means, of course, already knowing the song. (You can’t play something by ear unless you already know how the song goes! Unfortunately, most people seem to think that phrase means there is no planning/preparation at all!)

As far as data…well, in all previous trips, we had to use Park WIFI because we didn’t have a data plan. Park WIFI is super annoying, because it constantly disconnects you. But we now have data (not unlimited…but plenty since accessing data for things like apps and schedules doesn’t really use much as long as you don’t watch videos or download lots of images), so that will be all the nicer.

I have a widget on my phone screen that shows the schedule without even having to open the calendar app.

what widget is that? sounds great! I’m always forgetting what’s on my calendar

what widget is that?

Dunno, actually. I believe it is just part of the Google Calendar app. (I have an Android phone, BTW. But I know that a similar thing is available in iPhone, since my wife uses it.)

If you have an Android phone, press and hold on the launcher screen (main screen with all your apps) for a few seconds. You should get options for Wallpaper, Widgets, and Settings. Select Widgets. There are a series of them available. Under “Calendar” there are a couple options. “Month 4 x 4” and “Schedule 2 x 3”. I used the Schedule one. Plop it onto your screen where you want it. It displays the first few items, but you can scroll it right on the main screen without having to open up the calendar app.

Cool. I have an iphone. I’ll ask the google about it and see what I can find. Thanks!

If you can’t find it, let me know, and I’ll ask my wife what it is she’s using.

holy crap that is life changing!!! besides getting rid of the “reminder” to set up screen time, now I can easily see what’s coming up. yea!!! Thanks!

that is life changing!!!

Claiming it is “life changing” suggests you are, in fact, a “power organizer”.

My wife LOVES organizing, and has a variety of planners, each designated for a different task. She’s the one who found the widget for her iPhone. When she showed it to me, I said, “Hmm. I wonder if I have anything similar.” So I found the Android widget that is effectively the same thing. For me, it is a minor convenience. To her, it is “life changing!”

For the last few years I’ve been developing this “trip calendar” in Powerpoint. The first one was very simple, but each iteration became more complex, showing more information. Obviously, the complexity also depends on the type of trip. As you might expect, my Disney version is the most detailed I’ve ever made. It gives DW anxiety just looking at it. I use Powerpoint because it is very easy to move things around, copy/paste, etc. For example:

I’ve pasted an image of my itinerary below, but have also uploaded the original Powerpoint file for anyone that wants to use it: https://goo.gl/PPcXeX. 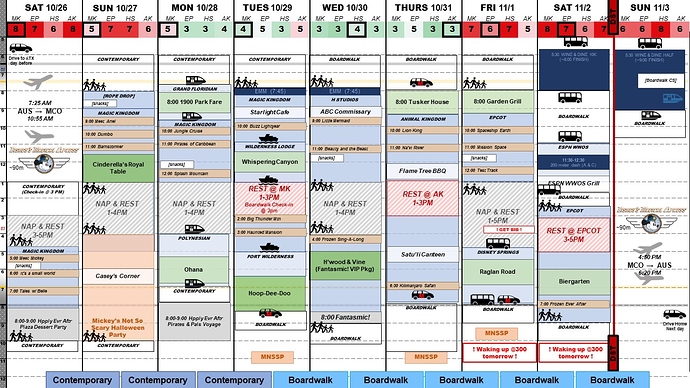 Or, put another way…overwhelmingly organized!

My wife would love it.