A new snag that might work in my favor. I’m seeing Kenny the Pirate report a list of DVC resorts that will open 6/22 and Kidani is on it but not Jambo. Has anyone seen this officially from Disney on any of their sites? My reservation is for Jambo.

The announcement was that DVC resorts would open 6/22, not select DVC resorts - there are several mixed-use resorts

Am I understanding it correctly that 1 side or the other (either owner or renter) will be screwed during that window where the resorts are open but parks are not?

The difference in opening dates isn’t the issue. Every DVC contract has a use year, meaning the start of the month where the points for the succeeding 12 months are allocated. I have an August use year, so my 2020 points become available August 1st. I need to use them by July 31st, 2021 or they expire. I can, however, bank some or all them, meaning I can remove them from availability in 2020 so that I can use them until July 31st 2022. I can bank points up until four months plus one day from the start of my use year. In my case, that’s March 31st.

When DVC was involuntarily cancelling reservations, they gave people with April or June use years a six month extension on the validity of those points. Meaning they were sort-of banked, keeping at least some of their value.

The issue is that for owners with August or September use years, where the banking window closed March 31st or April 30th, respectively, any points freed up by cancelling reservations for dates before July 31st or August 31st, respectively, get no comparable extension on the life of those points. They need to be used before the end of the use years. People with active reservations or rented points in this time frame have little or no flexibility in changing these reservations.

Forgive my ignorance, but why can’t DVC give some sort of “redo” during that time frame?

As a legal matter, no. I know people seem to think Disney can create its own laws, but DVC has a bona fide condominium association, just like thousands of others across Florida, and Florida law is pretty strict about accountability and rules for the association boards. Arbitrarily making rules changes would invite a tidal wave of entirely meritorious lawsuits.

As a practical matter, DVC just can’t dump every unused 2019 use year point into 2020. Because of all the Aulani points used in Orlando, there are already persistent shortages of rooms even under normal conditions. Adding tens of thousands more points which would need to be used in 2020-21 to a system already short on inventory would make for just as many disappointed guests. What good is allowing an owner to bank points if there’s no realistic chance of using them?

edit: And lest anyone think I have no skin in this game, I’m losing a nontrivial number of points because I didn’t cancel a reservation I have for 7/2-5. I decided to roll the dice that there would be an involuntary cancellation and I’d get a six month extension on those points. Between 3/13 (when shutdowns were first announced) and 3/31, I cancelled three other trips and banked those points, and it was foolish in hindsight not to have cancelled the fourth. However, I have a decent stash of points, and I’ve already banked 1/3 of my 2019 points into 2020, so I’m not all that busted up.

The most likely answer, although not the one I’m hoping for. It is strange that they wouldn’t just say ‘Animal Kingdom Lodge’ and instead would specifically call out Kidani. I was hoping that was my golden ticket to get out of my predicament.

Ah.
You might have to call member services to clarify.
I suppose at all other mixed-use resorts there is a separate wing or building which is used for DVC. Jambo is different that way.

Is copper creek listed? It’s similar to the dvc rooms at Jambo as they are in the main house of wilderness lodge.

If you look at the post I made here:

For the fun of it (wait…is this actually fun?), I went into my existing reservation to see if I could CHANGE my existing reservation. Yesterday the system wouldn’t allow it. Today it did. But what was interesting was that when I tried to change the resort (currently at Pop Century), half of the resorts are no longer available. I can still change to the following: Pop Century (current choice) Art of Animation Contemporary Yacht Club Kidani Villas The Cabins (For Wilderness) Polynesian Vill…

I listed the options that are given to me as someone with reservations already (not DVC).

I don’t think it is necessarily indicative of which resorts will or will not be open, but which ones they will allow people to move to, etc. DVC guests will be able to continue making reservations at the DVC resorts that have availability. Everyone else, you can only SWITCH to one of those resorts listed. 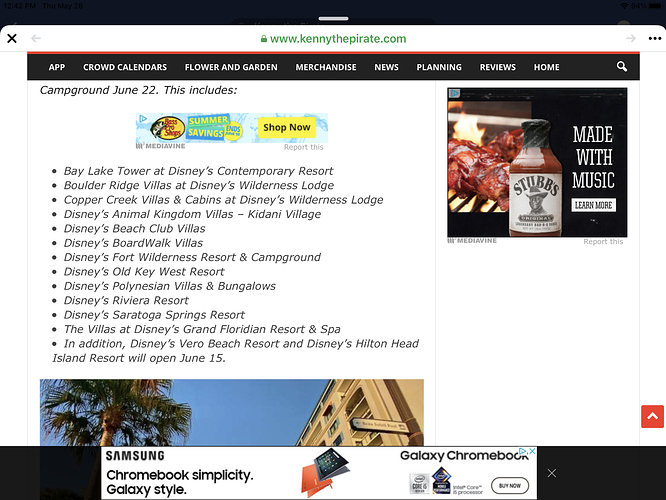 Huh. That is strange. I’m guessing it’s an oversight as @OBNurseNH suggested.

Right. It would be far more concerning if Boulder were not there.

Of course that Jambo is the only one missing is more confusing.

Definitely should call to confirm.

I have a contact at Kenny, though, and will reach out to ask.

DVC News is reporting ALL
https://dvcnews.com/dvc-program/owning-dvc/news-22659/4761-most-disney-vacation-club-resorts-set-to-reopen-from-covid-19

The most in the headline is that it does not include west coast resorts I believe.

Oops. Imagine my embarrassment when I asked about a KTP story with possible error and she said yeah that is mine. Lol.

Anyway she said she got the list direct from Disney. She does point out that boulder is a wing whereas Jambo is a floor and wonders if that matters.

I think the only way to know is to call

Thank you for trying and I’m sorry for the

it was just really funny LOL

We are good friends, no harm no foul.

Yes, my understanding is that one side or the other will be screwed. Most likely the renter, because the owner is under no obligation to make any changes after the reservation is secured. Not every owner is as kind as @PrincipalTinker.

For reservations made through a broker, I’m willing to bet that the renter is ALWAYS the party screwed.

I hope it was made clear to you the risk involved.

Of course this is extreme and nobody could have predicted this situation, so I can see how it may not have been stressed.