First time for a trip report - hope you enjoy!

I’ve never done a trip report before, but thought I’d give it a shot.
I’ll post one day at a time to see how it goes, and add some pics as I go.
Enjoy!

Last time we visited the World was 2011, so a good bit has changed since then.
Pre-planning was more intense this time - new attractions, all the FP+ to get, touring plans, etc. I’m a planner, so I enjoyed all of that. It was a temporary part-time job.

The four of us flew in to Sanford on Allegiant, only direct flight option from our local airport in Harrisburg, PA (for now anyways, Frontier is coming here in August direct to MCO).
It was basically the first time flying for our daughters, so they were excited for that.
We rented a car and drove the hour to WDW, stopping along the way for supplies. Wanted to check out the Character Warehouse store at the outlets, so I dropped the wife and kids there while I went to Publix. They were unimpressed with the store, limited selections and crowded. A place like that could be hit or miss day to day I’d imagine.

My parents drove in and arrived at POR before us. We met them at the lobby entrance as they were chatting with the greeter there. He was an older gentleman from Philadelphia, named Birdie. He was very friendly and entertaining with his stories and jokes. He even told a joke that we have only ever heard Pap say (who was there) - “I’m 90 years old, I’d be 91 but I was sick a year”. We all had a great laugh when he said that. It was a perfect way to start our stay there.

The lobby was very nice as expected.
We received our custom magic bands at home, but they had an extra set of gray ones there for us also.

Rooms were not ready until close to 5:00, maybe because I had requested certain rooms based on the recommendation of Touring Plans. We didn’t get the exact rooms, but did get the correct building and floor. No complaints with that except the delay.

We had planned to be at Epcot around 4:00. Had FP for photos with Mickey to take care of that right away and for FEA, but we missed both of them. Had to hussle to get to our ADR at Via Napoli at 6:50, made it just in time. Enjoyed a good meal there, although the pizza wasn’t as fantastic as I thought is was 7 years ago. Still good though.

We were strolling around after dinner deciding where to watch Illuminations, and a CM saw us and told us to go in to the roped off handicapped area that she was attending to. Maybe because the park wasn’t too crowded or since we had our parents walking with us? Regardless, it was nice of her and we got a nice spot by the rail for the show.

Had a casual walk out, stopping at Mouse Gear for some shopping and photo with SE. Minimal wait for the bus ride. 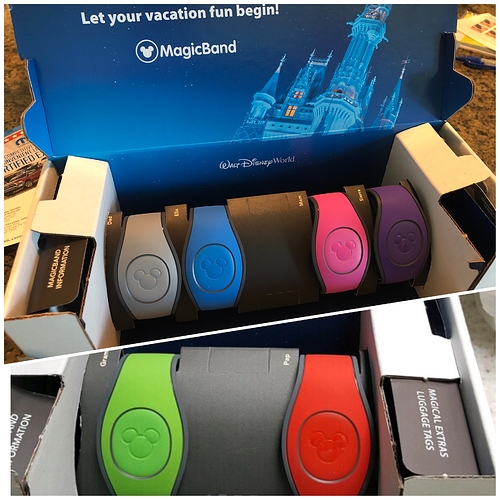 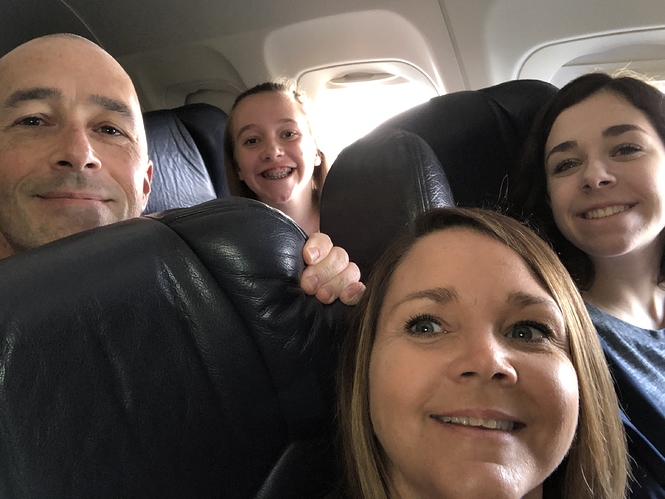 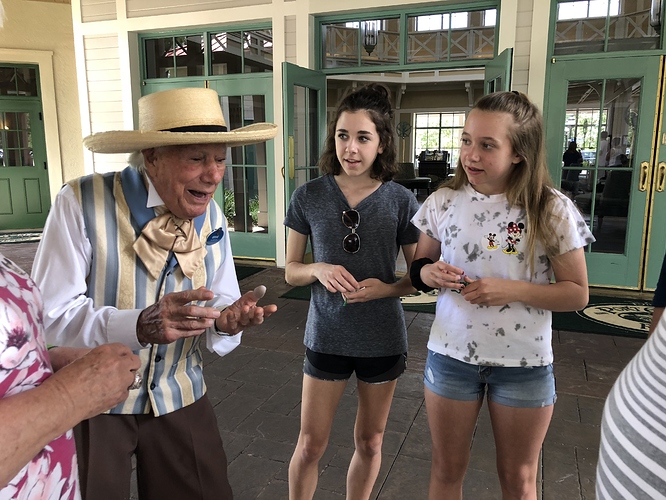 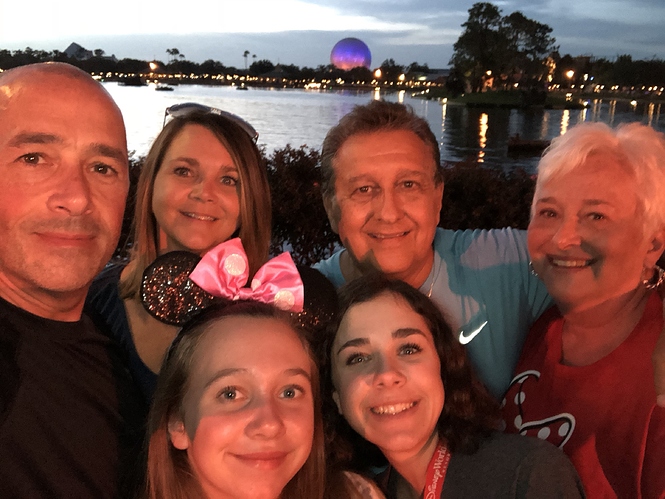 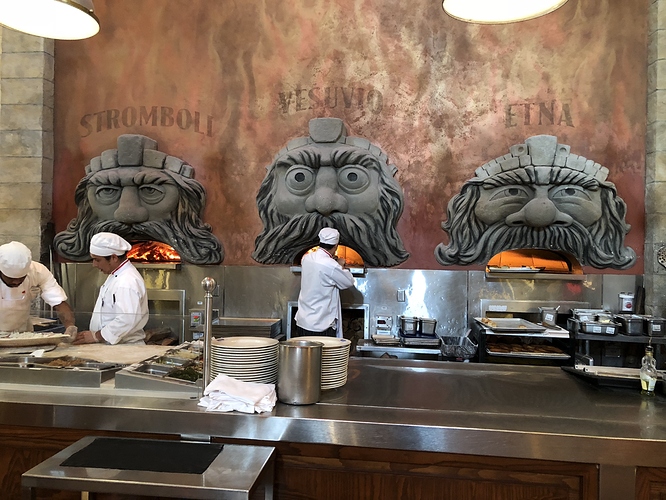 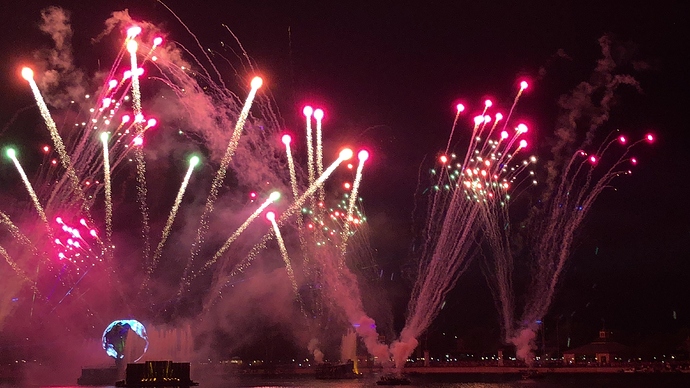 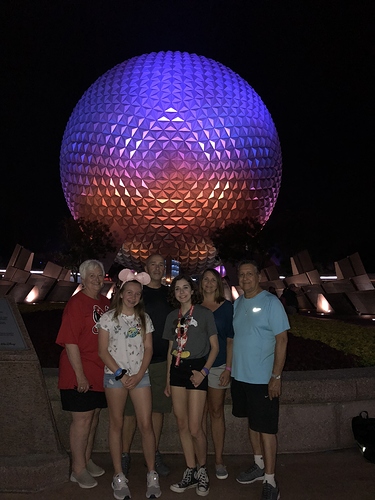 Sounds like you had a great first day! Looking forward to reading the rest!

First big day!
We are typically a get up early, rope-drop, go-to-close crew. I’m first one up to take a peaceful stroll to the food court for coffee. POR is beautiful just before sunrise.

For the first full-day, I try to surprise the girls and order a Minnie Van. It didn’t go perfect. We were headed in the direction of the bus stop and before I could direct them to the pick-up circle, they see a bus pulling up labeled MK. The girls are yelling to hurry up and I am yelling NO we’re not taking that bus! So, I had to share the surprise before the Minnie Van pulled in. Not too big a deal.

Our CM driver was great in Minnie Van #60 (don’t recall her name), and I’d recommend using this service at least once during any stay.

We arrive at MK and get thru the gates at 7:45 to get to our 8:00 ADR at CP. Got some great photos at the castle with NOBODY around us.
Breakfast at CP was very good. A great variety of all types of food for everyone. The breakfast lasagna was my favorite!
A little expensive, but worth it for early entry on our first MK day.

We’re done with breakfast just before 9:00 and the ladies want to visit the Emporium before heading to the attractions.
I take this opportunity to break off from the group and work on my next surprise for our girls…

Went to guest relations and upgraded our MYW tickets to ANNUAL PASSES!!!
We’d let the girls know on a later day, but had to get it done early to take advantage of discounts and photopass.

Off to Tomorrowland to start attractions. Skipped Space as the line grew too long by the time we got there. Did Buzz, TTA, Laughfloor, Speedway (needs updated to electric cars).
Headed to Fantasyland for our FPs for PP and 7DMT. Was a bit underwhelmed with the hype for 7DMT, still a fun ride and we enjoyed it but not worth the crazy long waits it still gets.

We go over to Frontierland to use our 3rd FP for BTMR.
Then the new FP grab game begins! We did great throughout the week with this.

I think we did Pirate’s and roamed around, did Presidents, saw the Muppet show.
Then zigzag back to Fantasyland for lunch at Gaston’s (quick/easy and pretty good) Pooh, Mermaid, Teacups.

More roaming around, then our first rainstorm around 7:00. Good timing as my parents ducked into Country Bears and we shopped for pins (my daughters brought some from previous trips and enjoyed trading, especially the oldest).

Overheard a funny exchange with another group that was upset that the rain closed the funnel cake stand, this woman really wanted a funnel cake.

Rain stopped and we were treated with a great rainbow that ended right on Cinderella’s Castle, that was really neat.

Went over and did Mansion (probably my favorite) and Jungle Cruise (many same old corny jokes but we love them), before heading to Main St for HEA.
HEA was awesome as expected. We were big fans of Wishes, but this is a good replacement.

Then the dreaded mass exodus with everyone else to the bus queue and the long crowded ride home on a stretch double bus. Some of us stood in the accordian pivot point where the floor rotates. 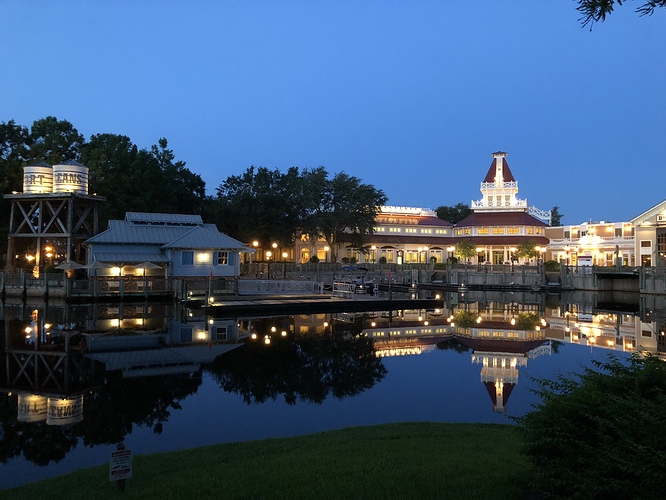 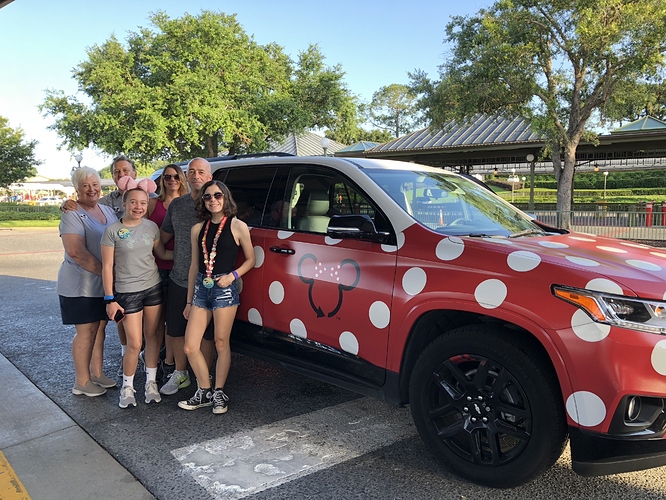 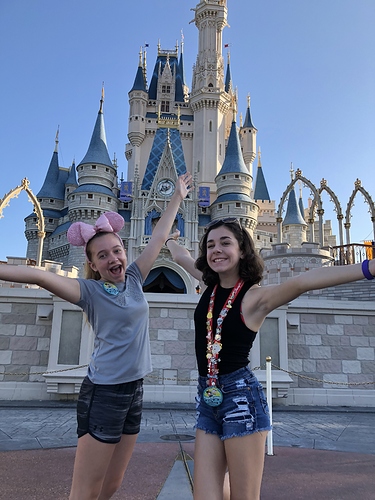 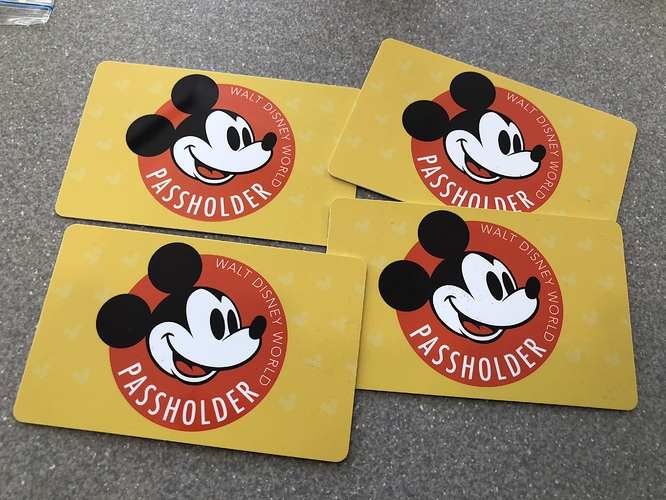 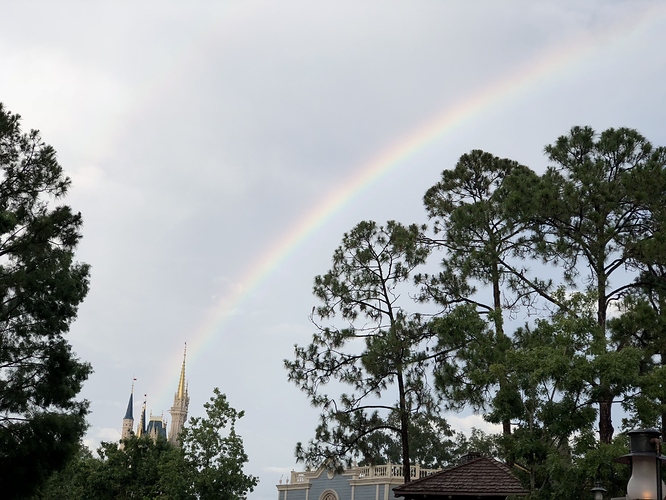 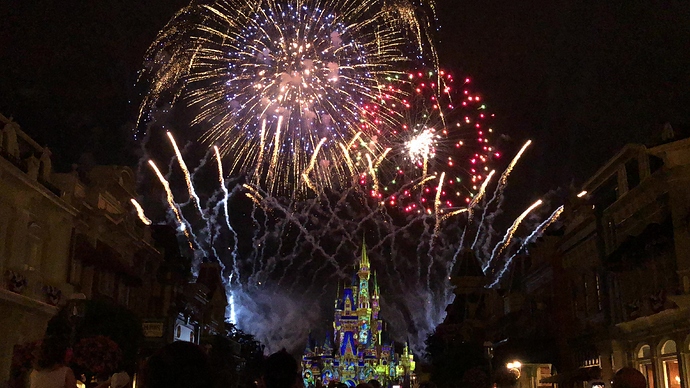 Love your photos! What a great trip so far!

Wow, so much fun!

Enjoying your report and pics so far. So cool you caught a rainbow pic.

that rainbow pic is so cool!

Love the rainbow picture over the castle!!

Four of us are HUGE Star Wars fans, so we’re looking forward to this park. Only have it planned for one day so we have to get it all in.

Not quite as early start this day, as we had FP for the major rides in the first 3 hours. We had nothing to rope drop since TSM was closed this week in preparation for TSL opening later this month.

Arrived a little after 9:00, got some photos with the Tower.
Rode RR (except my Mom who doesn’t do the extreme rides). We get an awesome ride action photo.

It was Gram’s goal to ride a couple of the more exciting rides this trip, Tower and Splash.
We head to the Tower and the “chicken door” jokes start while in queue. But, she rides it succesfully with no issues. We love that ride!

See Beauty stage show, a favorite of the family.

Next is Star Tours, it was just ok. Not a big fan of the old-school simulator rides and it was unusually hot in there during our ride.
Still had to ride it though.
Unusual thing seen in the gift shop afterwards - woman sitting on the floor openly breastfeeding. Not judging at all, just caught me by surprise.

We have lunch at Sci-fi. I know it’s not always highly regarded, but we’ve been going there probably every trip so there’s some nostalgia in it for us. Food was pretty good.

After lunch, we head towards launch bay for meet and greets.

On the way there, we encounter 2 stormtroopers walking around and interacting with people. I turn around and start taking a video and they walk right up to our daughters (one was wearing R2-D2 ears) and start harrassing them. It was a great surprise.

They moved on to other guests and did the same for a moment and continued on towards the launch bay building. We were headed that way anyway, so we bumped into them again on the way in and inside.
We were looking at displays inside and they come up to us again. I get a quick selfie with one, awesome!

Then one “grabs” my youngest and directs her to go stand facing the wall. He pushes her in close to the wall, turns around and stands guard for a moment. Caught it all on video, awesome again.
They dispatch and go on their way.

For us Star Wars fans, that was a big highlight of the trip!

We go do meet and greets with Chewbacca and Kylo Ren. Both were excellent! Hugs from Chewie, threats from Kylo. Did I say awesome again?
Got great photos and video of both.

The day could have ended then as a huge success.

The stormtroopers are back when we exit with Kylo. They have a group of people (including my Mom and my oldest) lined up to pose in a battle stance with them. They then grab me and put me in “custody” for a moment. Awesome.

We finish up there and head out just in time to get an up-front view of the First Order procession with Capt Phasma. More awesome.

While waiting for the next Frozen singalong show, we go to Baseline for drinks and snacks. Nice addition to the park. The girls ditch us and go see Indy show.
We all meet back and enjoy the Frozen show.

Go see Muppets, do some shopping while waiting for another family member to meet us for the evening.

My cousin’s daughter just moved to Orlando to start a job with Disney. She did a semester there previously through the college program, but this is more of a real job/internship that will hopefully turn into something permanent for her.
Very excited for her.

She arrives and we have some time to kill. We try to see the Jedi tale movie but it’s done for the night, so we go see Olaf quick. Warm hugs for all.

We find a good spot to camp for the Star Wars finale.
The 3 girls are sitting on the ground catching up and a CM comes up to them and gives them a free bucket of popcorn. Says that she saw them relaxing and thought they would enjoy it. Nice little memory.

Of course, we enjoyed the Star Wars fireworks show.

Very long lines at the bus stop again but we manage. 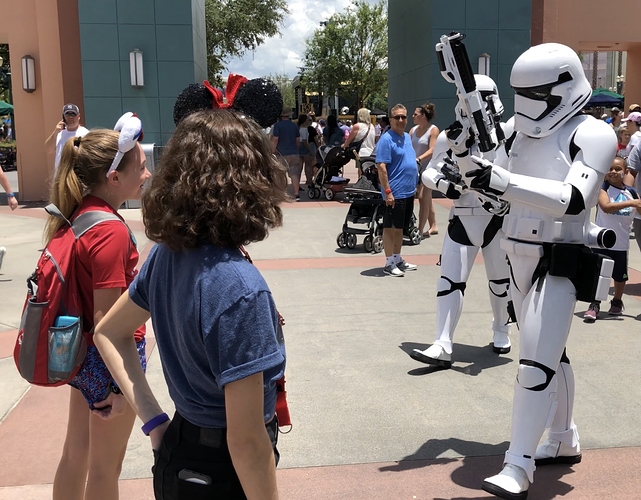 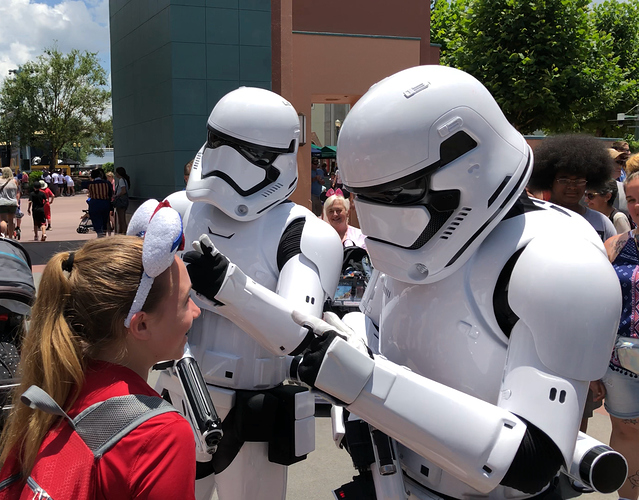 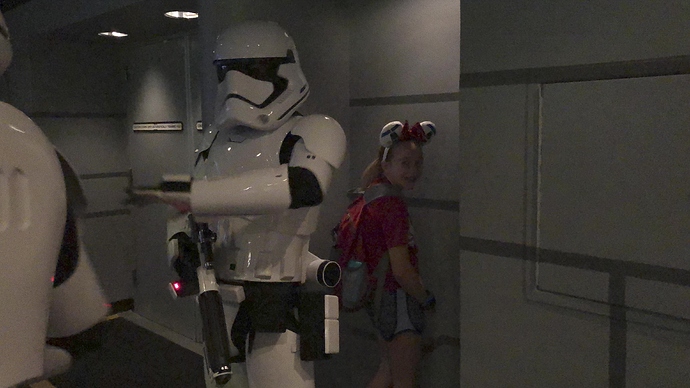 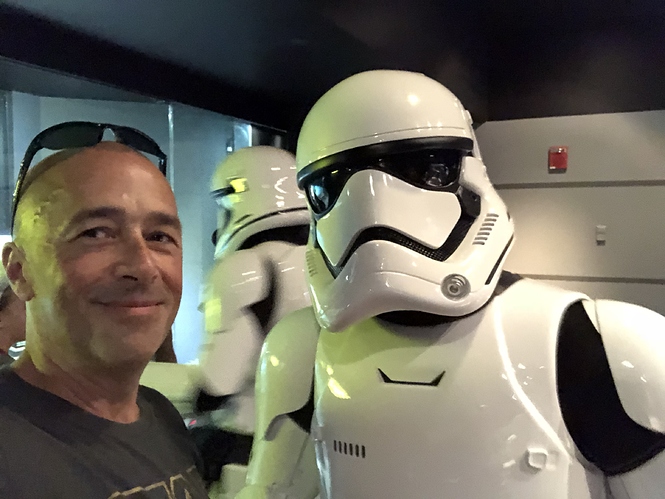 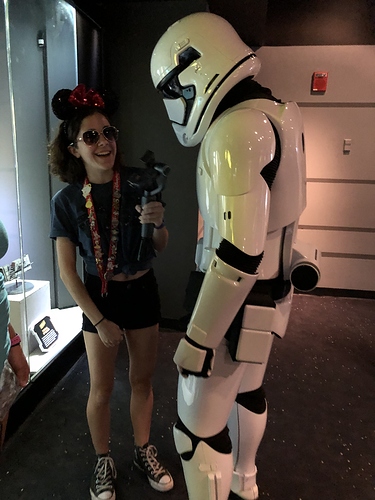 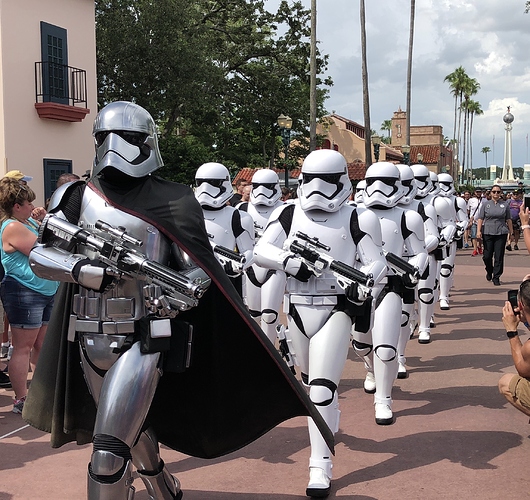 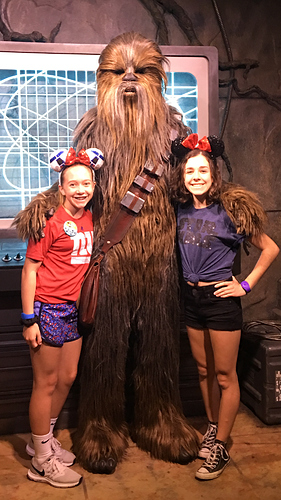 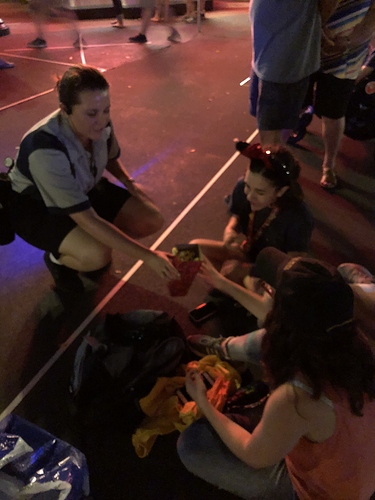 What a fantastic day!

Great pictures. Thank you for sharing!

Great trip report! I enjoyed it and your pics!

Great pictures, very much enjoying reading your report, thanks for sharing!

Such a fun report! Thanks for sharing!

Loving the report; looking forward to the next installment.