DL area hotel reviews and such

There is a pinned topic related to this that is quite old. But I was trying to find a site the recommended and/reviewed hotels near Disneyland. I found one by Tom Bricker that broke it up into top 5 budget and top 5 overall. Thing is, at least 3 of the top five budget are definitely not budget, and are more expensive than, say, the Westin which ranked in the top 5 overall. So, I assume the article is quite old. (Why, oh why, does he not include published on date in the article?)

No, I am not planning a DL trip at this time. But I was curious since my wife and I have talked about a hypothetical future trip there.

I would love this information as well, for my own hypothetical (in my mind at present) trip.

We’ve had several somewhat recent discussions about this, and usually @Julianne_fki, @lolabear_la, and @93111tink have great insights. Maybe I can find some threads and link here, but most are probably over a year old at this point.

Here’s are a few from the last year:

That is amazing! Gaming education software sounds pretty awesome. I know my DS6 would be much more into school if the curriculum could be more engaging.

Sign up for emails from Grand Legacy. They often do flash sales (sometimes they are prepaid non-refundable but not always) and with the amount of time you have until then they are bound to have some and maybe even one that works for your dates. Tropicana and Camelot used to do sales but they are very far and few between, but wouldn’t hurt to be on their email list just in case too. Fairfield is a fine option, but if you are considering using your points there are much better options, even if …

Not me. My go to is Grand Legacy at the Park, but I have also stayed at Desert Inn, the Fairfield Inn, the Anaheim Hotel, and the Castle Inn once many years ago. The Maingate is too far in my opinion, and is rated #124 out of 128 Anaheim hotels on Trip Advisor. I would avoid just because of that, and this shows me all I need to know. [image] [image] There are many better options.

I’m a big fan of Anaheim Park Tourist! They’ve been going and staying in the hotels in that area for the last few years. They aren’t sponsored or anything, so you really get an honest review!

So I like to use Tom Bricker’s bigger article that has all the hotels ranked, Disneyland Area Hotel Reviews & Rankings - Disney Tourist Blog whenever I am trying out a new hotel in DLR. I tend to agree with most of his assessments and in the main article he links to his more detailed reviews on the ones that have more detailed reviews.

Anywho, my strategy these days it to look up this list of hotels (within the walking distance I want to walk from DLR) & just go with whatever’s cheapest BUT factoring in fees & parking (because we drive) and if Park Vue (our favorite that’s the closest) is not too much more, we lean towards picking it. And just a note that all of the hotels I look at used to at one point be considered budget ($89/night could be easily found with $119-129/night being more standard and during peak times maybe up to $159), but they have gotten so atrociously high in price because of their location & popularity that I don’t consider them budget anymore (I don’t think I’ve seen them below $200/night in quite some time).

And then a couple near the convention center that we’ve tried in the past & loved, but don’t do often due to cost:
18. Sheraton Park
19. Residence Inn

There are few hotels in the vicinity of the Westin too that I check, but that is a long walk (for us with 4 kids and 2 still in the stroller) so we only book there if we really really need to save. And usually we regret it, because it’s not like we’re saving SO much money staying that far out.

Desert Inn has been my go to for the last 12 years now. Basic, clean and friendly staff. I just spend $132 total for our OBB nite. Tropicana used to be my go to because their cost was the lowest but also their breakfast the best. But now that it is no longer offered I stick with Desert Inn. AP and AAA disount offered too. It will always be the lowest of the group of Hotels there on Harbor Blvd.

Is that one within walking distance of the parks?

I just mapped it out. Google reports less than a 10 minute walk.

We’ve stayed at the Desert Inn & Suites a couple of times. They have suites at a decent price with four queen beds and two bathrooms. It’s no frills for sure, but super close to the parks. Grand Legacy is a little nicer (maybe?) but Desert Inn is actually closer.

We’ve stayed at Desert Inn & Suites once before and they were basic & good for a place to sleep.
When prices started climbing we had planned a summer full of trips and had at least 3 booked with them. The first one came up & we had to cancel, which we attempted to do 4 days before (and was within their terms). And it was weird, they straight up said no you can’t cancel instead of pointing to their terms and explaining why within their cancellation policy we were too late. When I asked about their policy from their website and how it was a whole day off, they got belligerent and doubled down that they couldn’t cancel & said the charge had already been put through (which would’ve been 24 hours before their policy said it was). The call did not end well and we ended up calling our credit card company to verify if any charges were pending (there were none & the company issued out a new card and cancelled the old one so if the hotel tried to submit from that point on, the charge wouldn’t go through). It was a hassle and very much felt like a dubious experience on the hotel’s side. After that I saw a bunch of reviews on Travel advisor for similar experiences with other guests. So I refuse to support a shady business process like that.

So they are a fine, basic, very cheap hotel. But if you need to cancel, be prepared for some runaround from them unless it’s 5 days or more.

Wow! I did not know that was the same place. I vaguely remember you posting about this, but not that it was for Desert Inn. They’ve been far less expensive than some of the others nearby so have booked them twice recently. But next trip is at Grand Legacy.

It has been hard not picking their cheapest rates, especially as we are now a suite size family and they have the best-priced suites. But we have talked about booking both Desert Inn & something else that we can cancel with 2 days left as a back-up & if we’re still not sure we’re going 5 days out, cancel the Desert Inn. But that seems like way more work. And Park Vue really is the best all around customer service on Harbor, free parking that isn’t jam-packed at the gills forcing you to valet or roam the parking lot like a shark for another guest to leave and their rooms right up at the front are closer/less steps than our GCH room was. Their pool also doesn’t completely suck & their rooms are recently updated & well-maintained. So all around even though it’s nightly rates are higher than most along Harbor, all those other things always sway us towards them.

Grand Legacy is really good too. They just don’t have any suites or even any rooms with 3 sleeping surfaces! So since we’ve moved to needing at minimum room for an air mattress (pullout sofa bed preferred), we’ve not been able to take advantage of their great flash sales.

Grand Legacy is really good too. They just don’t have any suites or even any rooms with 3 sleeping surfaces!

They do have 2 and 3 room suites, in the front tower. Avery and I stayed in one of the 2 room suites when they first opened the tower for some ridiculously low price. They have 2 queens in the bedroom, and a pull out couch and table/chairs in the main room. They are quite nice (as are all the rooms in the tower). The pricing at Grand Legacy has gotten pretty high lately, I remember when it was $100 a night and it is nowhere near that these days. I don’t love Desert Inn, but their lower cost and location have won me over lately.

Oh now that you mention it, I do remember seeing Grand Legacy had some limited number of suites but I think anytime we have looked they are like $400/night and no thanks, if I’m paying that much I want to be at DLH. But it’s probably a result of most of our trips being more spur of the moment.

Thats really unfortunate that that happened at Desert Inn. Ive had to cancel a handful of times there and never had an issue. Was it through a third party prepay? Didn’t you also have an issue with parking at Desert Inn? Very unfortunate. It is always our groups go to. Grand Legacy’s suites are really nice. Lisa was able to get a 2 bedroom once and it was huge.

Speaking of the group, I miss you all! Naomi needs to plan another bash like she did in January 2020. This trip: 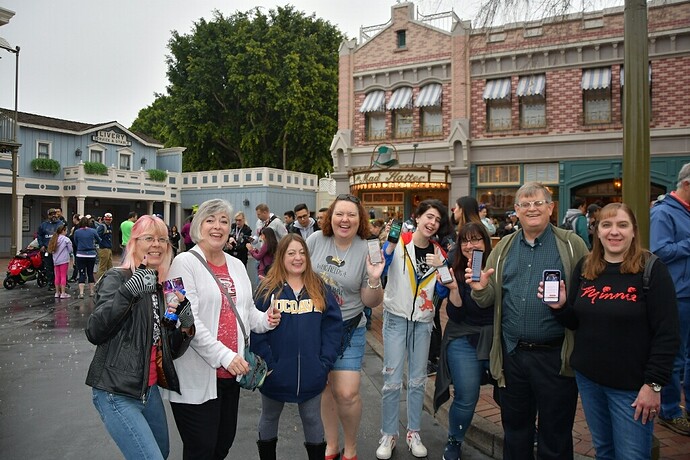 We always book direct so nothing like that was going on when we had to cancel the Desert Inn. I’m wondering if they saw that we had multiple reservations and so didn’t want us hoarding reservations we weren’t going to use. But we really did have a bunch of trips planned that summer and took the other two just fine. We just couldn’t make the 1st one pan out. But we for sure called the next day and cancelled the other two (no issue on those).

The parking issue was at Grand Legacy. The first few times we stayed with them the parking policy was different than the previous stay. The time that I was super frustrated was because they didn’t have a hard & fast time you had to leave by & the last night they said I just needed to call the next morning sometime around 7am (but it took us asking several times for them to finally say you just need to check day of). So I called just before 7 so we could figure out if we had to move the car before RD or not and they said, oh you have to talk to the valet guys after 7. They’re not done figuring out what space we have." So we walked out and talked to them & they said we had to leave then. Not even until checkout. It was just really frustrating. BUT to Grand Legacy’s credit, a few months later we got an email from them saying “We’ve updated our parking policy to better accommodate you!” or something like that & we’ve never had an issue since. It was just really super weird how it was that one stay.

That’s a great group right there! Is Nana still doing trips?? I haven’t been able to keep up on chat at all but I don’t remember seeing her even when I was last ducking in here & there.

And where is that first picture?? Is that Splitsville (I think I see a bowling ball)?? It’s not one I recognize and I’m not used to that for DLR lol.