Why do New Jersey moms come to Disney World to yell at their children in public?

Or are they usually this mean spirited year round?

I am laughing so hard right now just at the title of this thread (although I absolutely don’t think it’s funny to yell at children in public).

We used to play a game: How many wives are furious with their husband in this park? Try it…

We do, “Welcome To The Sugar Crash”
Bonus points for pointing the victim out earlier in the day while they are happily enjoying a treat. When you see a 5 yr old walking out of the candy shop with a two foot long, one inch wide pixie stick at 9am with a massive smile, everyone knows a meltdown is coming in about 90 minutes.

When we got there too late to get in line for 7DMT, and my husband was all wide eyed at the length of the line saying “I didn’t think it would make that big of a difference!” I started in on the lecture that goes something like “this is why it’s so important to listen to me about what time to get here, everyone thinks i’m crazy until they see the lines! If we got here 20 minutes ago there would be no line!!! But no, YOU had to shave, huh???” Then I listened around and realized at least three other wives were telling their husbands exactly the same lecture

We just laughed and moved on to PPF and BTM 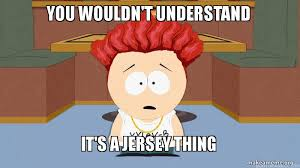 CONFESSION TIME
I am not from New Jersey, nor do I play a New Jerseyite on TV.

On our 2nd family trip, I had a plan to get to the hub at a certain time to get a good spot for the fireworks, which we were not able to do on the first trip. (We watched from behind the carousel that trip which was very cool in a different way, as a janitorial CM “directed” the fireworks with his broom.)

About an hour before we had to implement my hub-spot-plan, I warned everyone we needed to hit that time or we likely won’t have a prime spot to watch Wishes from. Which we all really wanted to do as we had never seen the show. I then gave the kids some glow sticks and glasses kits so they could wear them while waiting.

I reminded them of our deadline as it approached…

At the designated time, someone suddenly needed to shop for something in the Adventureland Bazaar, which we had already been hanging about for much time.
Then the girls decided they needed to use the very crowded bathrooms.
My 11-year-old son and I waited, doing nothing.
Girls finally return, I stand up and tell them we are now about 40 minutes past the time I planned for us to grab a spot, we needed to get there quickly and if lucky we still might find something decent.

As we walked, trudging along in the now thick crowd all aiming for the hub, my son then decides it is time to assemble his glow stick glasses.
Which I had given them more than 90 minutes before.
Which he had not done while others shopped.
Which he had not done as we waited more than 15 minutes for the bathroom break.
Which you can’t do while walking because they are awkward glow stick plastic thingies.

I asked him to wait until we got to the hub and to focus on our goal since we were about 20 minutes from the fireworks starting. He refused and stopped in the middle of the path to finish them.

(Note that he had already had about a dozen times when he didn’t want to listen that day, starting off with disagreeing vehemently which way the bus stop was at CBR and walking off in the other direction as the bus I could see across the lot arrived at the stop I was aiming for.)

So, if in 2014 you were crossing the bridge out of Adventureland and saw what I’m sure was a red-faced Dad giving his kid a loud telling-off right in the middle of the path as people streamed around them, then you had an encounter with @JJT.

Of my two kids he pushes my buttons in a way I could never imagine. Also this tween year stuff with boys is terrible.

My cousin posted an adorable post with her 8yo son and tagged it with the question, “Why is 8 so sweet?” I replied that 8 is sweet because 12 is coming

Many chimed in and said they could relate.

Jersey mom here…I do not go to WDW just to yell at my kids in public. I do it at home too!

i really try to never do that. Maybe thats a north Jersey thing?

In my experience, it is NOT just “Jersey moms” who yell at their kids.

I have boys age 12 and 14. It sounds like I should avoid Disney.

If you are lucky enough that they are not yet too cool to go to Disney with Mom, you should go, and go quickly!

I am from Jersey, and vblank isn’t entirely wrong, lol.
We just yell all the time. One thing I will say is that Jersey people have zero filter. If we’re mad at you, you’re not going to find out about it 3 hours later, you’re gonna hear about it NOW. Also, we kinda don’t care if others are secretly judging us.
I don’t think I’ve ever gone off on the youngest while at Disney, but I DEFINITELY have with the other two. Especially my oldest. There was a time when he thought that he could get away with stuff in public because I wouldn’t dare to publicly discipline him…
He was wrong. Terribly wrong.

I’ve given the lecture, “This is why I say you HAVE to get up by 6am!” and/or “We MUST be in the car/transport no later than…” more than once!

Me and DW are born and bread Jerseyans. I’m a fisherman with a lot of patience but I have my limit, and God help who ever is around when I blow. DW is funny she very seldom explodes, but when she does it is nuclear. We took our daughter and nieces and nephews to six flags once and my wife’s nephew told her “F.U.” I thought that is it, the police are going to come and take our daughter away from us. Funny thing is no one paid her any mind she went off on this boy for 20 min. When my sister in-law found out what happened he got it from her too. As a husband who loves and protects his wife I had no chance to step in. As I said nuclear.

You are an awesome storyteller

We used to play a game: How many wives are furious with their husband in this park? Try it…

Totally going to be on the lookout for this. Sounds fun.

I’m very low keel. I don’t think I’ve ever had a blow-up with my kids in public and only once with each of my girls in private in the past 30 years. But the one time was enough for them to never want to see it again. I usually save it until they were around 12 or 13. I yell for hours and make them sit there the entire time making them listen to my lecturing and constant repeating of the same thing over and over and over. Lol. I’m like a tea kettle on a low flame, it takes a long time for me to boil. So they know how long they can get away with something and notice the signs of when the kettle is getting too hot and then they chill out. My oldest is 31 and I can still get away with just giving the “Dad look” and she knows enough shenanigans have been played. Now, my DW on the other hand is just the opposite. She yells often to get her point across to the girls and they just laugh. When my wife has had enough she just hands the situation off to me. I literally flash the “Dad look” and they chill out instantly. Totally pisses her off to no tomorrow. I just tell her that I save my ammo for when it’s really needed.