Who has a crystal ball?

Edit to Add: I realize that a lot of people will be upset if vaccines are required.

Six months ago I would have been very upset to hear we couldn’t cruise without the vaccine. At this point, I’ve lost so much of my desire to travel that not being able to go without a vaccine (we won’t get them) doesn’t bother me. I think we are so many years away from travel feeling normal. It’s going to have weird bits for the long haul, I fear. One aspect 2020 has shown me is how much else my money can do for me if I’m not traveling! I do want to do some road trips, but I think I could live without a cruise in the future now.

Funny, I was listening to this week’s episode of the RCBlog Podcast and for the first time in months I started thinking about my next cruise.

I will get the vaccine as soon as I can and I hope it will be a requirement at least for the next few years.

It probably helps me not care bc my family also is showing zero interest. We’d been excited to try Royal and now they no longer want to cruise.

At this point I’m feeling better and better about my decision to preemptively cancel my May 24th cruise. No way it’s gonna happen, as uncertain as I was 2 months ago. 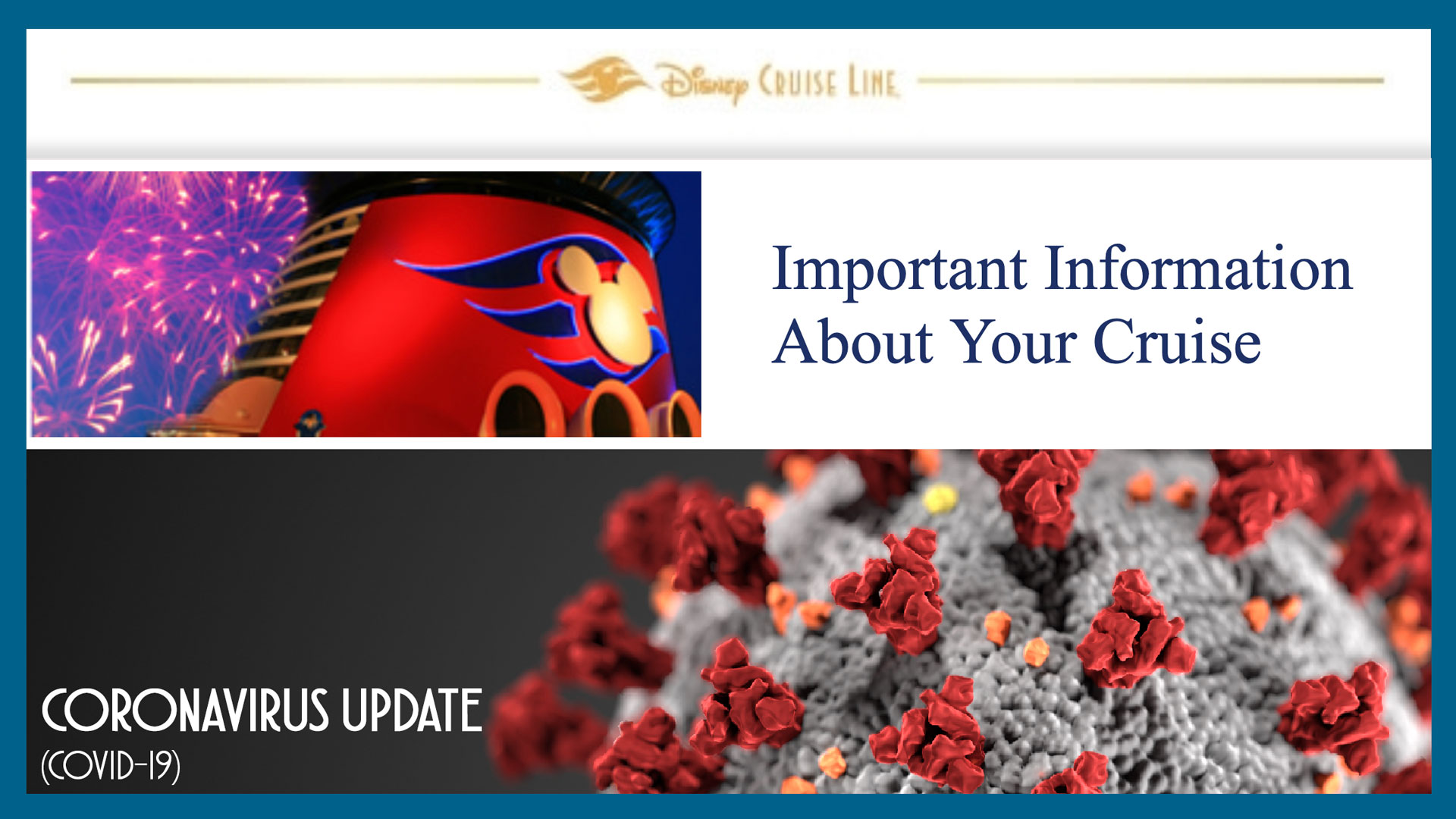 Today, Disney Cruise Line announced the extension of their cruise suspension cancelling sailings through April 2021 and select sailings onboard the Disney

I think things will start to improve drastically once vaccinations start to reach critical mass. So cruises could resume somewhat unexpectedly whenever that happens. I’m just more and more sure it won’t be by May or June. Maybe August or September?

Hard to believe, but here is the full list of Disney cruises that have been cancelled to date. Over a full year if you include those announced in the future. 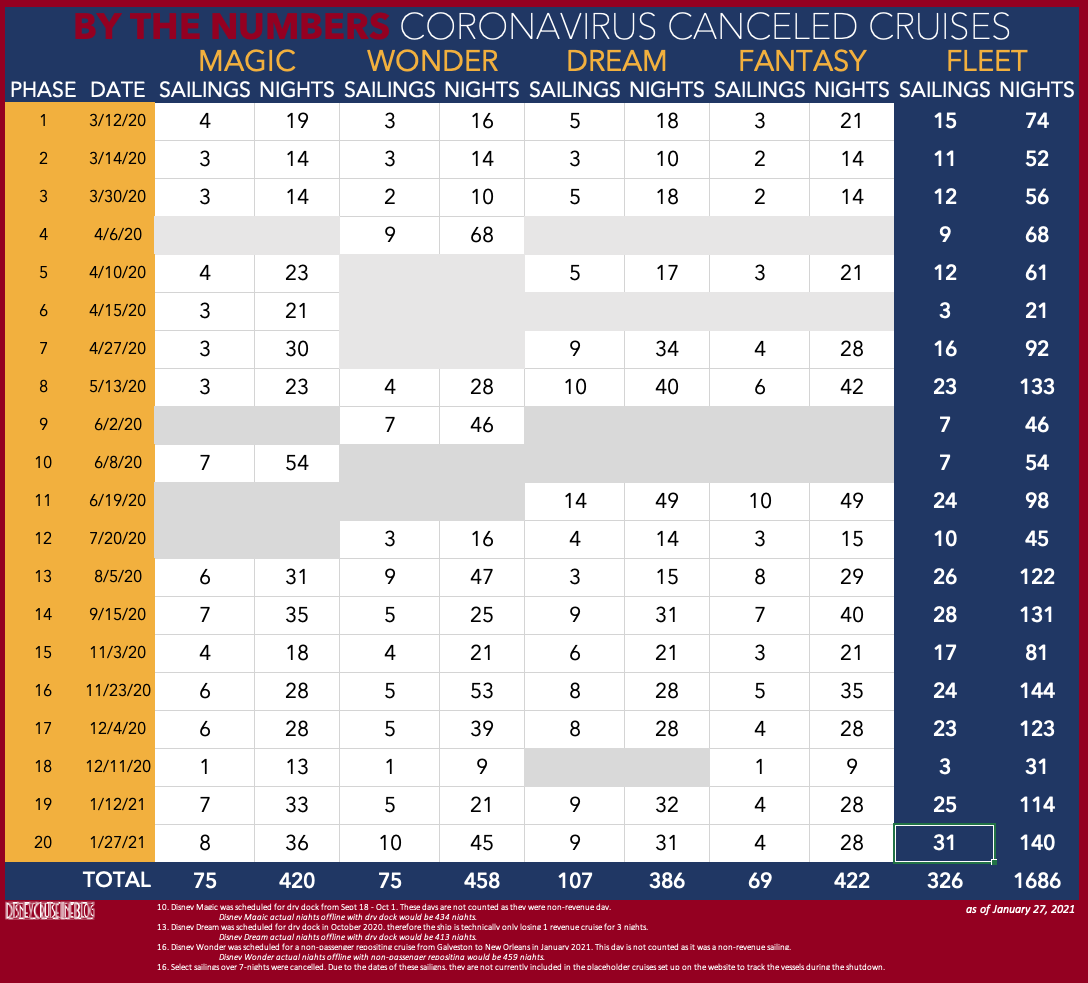 I can’t imagine all the displaced cruise ship employees.

I’m just more and more sure it won’t be by May or June. Maybe August or September?

I’m thinking more like December (or later if there are too many people who decide to not get the vaccine).

Most will get. It will be whether or not all the employees from other nations will have them available.

It’s possible, and perhaps a safer bet. But my point is I think it’s hard to predict exactly how much better everyone will feel when everyone over 65 who wants the vaccine has it, deaths plummet, and cases are very low. Exponential decay can be just as surprising to people as exponential growth. Just look at how fast cases and hospitalizations are dropping. If that continues (big if, but I do think it will eventually continue once vaccinations are widespread), and most of the people who die are vaccinated, COVID will really be not much more impactful than “the flu.” 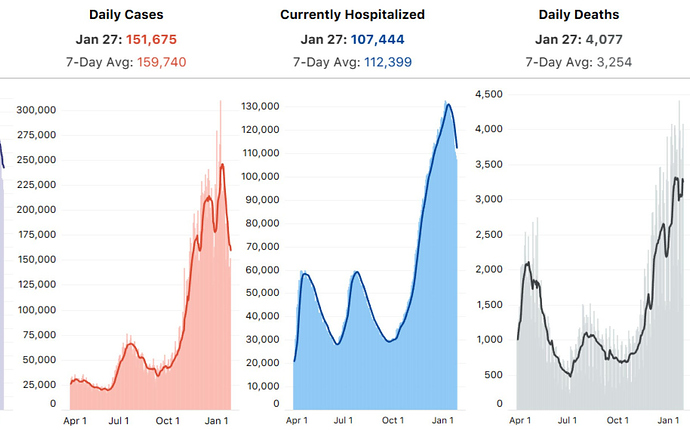 If that continues (big if, but I do think it will eventually continue once vaccinations are widespread),

Since last February I have been following what Dr. Michael Osterholm (epdimeomigist) has been predicting about the pandemic and he has pretty much nailed all of it. Yesterday he said that the next 6-14 weeks could be the darkest. I really hope he is wrong, but he has been right about almost everything with this virus the past year.

Yesterday he said that the next 6-14 weeks will be the darkest.

What was he referring to? If he meant deaths, he’s probably right, since we have such a huge number of daily deaths and it takes time for those to tamp down.

If he means that cases are going to start to rise again due to other variants, that’s possible, but I’ve heard conflicting data on that. Other epidemiologists think the high number of previously infected + vaccinated people + mask wearing / distancing will counterbalance the growth in cases.

Here’s what the NYT said about it in their morning newsletter today, which gives balance to both sides:

Put those two groups together, and you realize that about one-third of all Americans have at least some degree of immunity from the virus. That may be enough to begin — begin — slowing the spread, as my colleague Donald G. McNeil Jr. explained on “The Daily.”

And there are signs of change. Multiple states tightened restrictions late last year. The country just elected a president who echoes scientific advice rather than flouting it. Some Americans may also be inspired by light at the end of the tunnel.

“I’m hearing from a lot of people that one of the reasons why they’re really hunkering down now is that it would be a shame to get a severe Covid case while waiting to get the vaccine,” Dr. Lee Harrison, the chairman of a local health board, told The Pittsburgh Post-Gazette this week.

Dr. Mark Escott, who runs the a local health agency around Austin, Texas, told the CBS affiliate there: “Folks are changing behavior. Folks are wearing masks, folks are staying home, and that is resulting in these decreasing cases.”

Dr. Alex Garza, a member of a pandemic task force in St. Louis, told The Associated Press: “The fact that this is happening in the winter when respiratory viruses typically spread the most shows us just how effective all the preventative measures actually are when we use them.”

It could get worse again

I want to emphasize that the pandemic has not entered an inexorable decline.

The biggest reason for concern is the newly infectious variants that could cause case numbers to surge again, especially if people become blasé about masks and distancing — or the Biden administration fails to accelerate vaccinations. And the current rate of death from Covid-19 remains horrific.

But the U.S. has it within its power to make this month a true turning point.

What was he referring to? If he meant deaths, he’s probably right, since we have such a huge number of daily deaths and it takes time for those to tamp down.

If he means that cases are going to start to rise again due to other variants, that’s possible, but I’ve heard conflicting data on that.

Yes, the big question is: will immunity from vaccination and prior infection be enough to prevent a large spike in cases from the new variants?

No one knows the answer and I have seen speculation on both sides. My own opinion is that now is the most important time for people to hunker down and avoid non-essential contact, mask and distance. There is light at the end of the tunnel, but there is also an oncoming freight train … like in the cartoons, we needs to get to the end of the tunnel before we get slammed by the train. It is a race and everyone can pitch in a bit to help.

My own opinion is that now is the most important time for people to hunker down and avoid non-essential contact, mask and distance.

Agreed. The favorable outcome that I am optimistic for is dependent on people channeling that optimism into being extra vigilant for this last little bit before they can get the vaccine.

I want to share your optimism, unfortunately I’ve met ppl ;(

Reasonable assumption! The good news is that the people who are least likely to be careful now are much more likely to have already had it.

And while there are still questions about people getting it twice or spreading when immune, it’s rare enough that it shouldn’t be a significant factor in the nationwide numbers.

Also, there are still a lot of people doing their best!

Thank you for elaborating and putting more perspective! I totally agree w/ this but didn’t articulate it

the people who are least likely to be careful now are much more likely to have already had it.

Today, Canada said no cruises there until at least Feb. 28, 2022. No official DCL statement on this summer’s Alaska cruises and any fall New England ones yet, but…

The Government of Canada continues to monitor the evolving COVID-19 pandemic and the impact it is having on the marine and tourism sectors. Keeping

Future cruise credits for cancelled cruises have been extended. Originally we had to use our credit by May 31, 2022, but now they’ve extended that through September 2022.

Wonder what this means for when they actually expect to sail again?

Our original cruise at the end of May was finally cancelled last week. So the very earliest cruises will be sailing is June, and I think even that is unlikely. I bet they want to have at least 12 months open for re-bookings, so maybe their hunch is that they’ll resume cruises by September? We’ll see.

maybe their hunch is that they’ll resume cruises by September

I think it will be longer. How will a breakout of Covid be handled on a ship at sea? Cruise lines can’t expect the US government to helicopter passengers out like was done with the Diamond Princess.