Weekend crowds are back 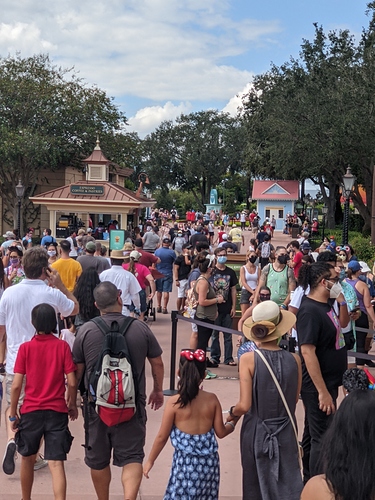 Wow! I listened to a podcast this morning that was telling people to book Christmas since crowds will be light.

Maybe lighter than normal but I cant see how it will feel lighter unless they start opening up more things to disperse people.

We are regular September empty nesters, feels like a “normal” September weekend. Soarin’ spikes to 80 minutes now and then.

Around world Showcase, yes like that all over. Inside the Land, yes. The rest of Future World is sparse walk ways around construction walls.

Maybe Monday thru Thursday, but sure looks like weekend crowds are back.

And the crowds are getting rowdy!

New: Check out Information About Altercation at Disney World Attraction! -...

According to a witness on reddit.com, a fight broke out yesterday inside Magic Kingdom between two families. Check out the latest details.

I get it. 80% of other guests are following masks and line markers. 15% are on their phones or taking and not paying attention. 5% are being A-holes over masks and line markers.
,
We were in front of a “large loud family” 4 were not wearing masks,. All of them crowding us. I mentioned it to them twice, suggesting were their line markers were, then my wife pulled us out of line … Or that story would have been about me. My wife is smarter than i am.

My wife is smarter than i am.

Generally, my husband would agree with this statement however I may be the one a little vocal in line, but politely so. Maybe ill bring some stinky perfume and spray a bit if I run into this. Natural repellent like!

One commenter who was in the park that day said there was an incident where someone in an ECV ran over a child in a queue, and that caused the parties to yell at each other, but could have been a separate incident.

Not terribly surprised. Saw a few kids almost get run over on our last trip. They almost need a separate path or something. People always cutting them off. Kids running all over. Some of the drivers are awful. Recipe for disaster.

Ive never experienced this in Disney. All EVCs seem to be cool. Outside the bubble, different story. I once had 1 roll into me at a local grocer. Lady had the nerve to yell at me. I was literally looking a frozen vegis

I’ve seen a few aftermaths of a ecv collision. Usually one party is outraged, the other is mortified. What’s weird is it’s not always the same but I’ve never seen both outraged from the get.

And I’ve nearly crashed into my own number of ecvs. They’re super hard to control and they’re bulkier than hell, so I never blamed the driver for the nearly crashing into my speeding self. I can only imagine children constantly darting out in front.

it was a primary motivation in deciding to use a wheelchair for my mom instead of letting her try and wrangle one of those beasts.

I can only imagine children constantly darting out in front.

Yes, they are jumpity little beasts, lol. I can not say how many times I have profusely apologized for my kids bumping people. But if a kid was run over, man thats hard. I, as a mother, would watch the littles if there was an ECV around, because I just know accidents can happen. I would corral them and make them aware of the dangers, have a convo. Adults would be surprised what children actually understand and interpret. Not blaming the parents by any means but Im all about offensive parenting. I like my kids to be in the know.

This is all part of the calculated risk of going to Disney right now. You may get CoVid or you may have your kid run over by an ECV. Which is more likely to occur? Honestly though if my kid got run over by an ECV or saw another kid being run over by an ecv especially with the 6 feet apart rule, I would be with @tline35. I would be like a grizzly bear protecting her cubs.

My youngest, 4 at the time, almost got run over by an ECV in the bubble. There was plenty of space and DS was walking next my DH. This person came flying by on his ECV and my DH had to yank DS out of the way. My DH gave the person the nastiest look, but kept his mouth shut.

The OPs pic looks like a normal day in Epcot pre-COVID. Yikes.