WDW raises the price of Magicbands by $5

Guests looking to purchase MagicBands were hit with a less-than-pleasant surprise at Walt Disney World on Wednesday.

Ouch. Who is paying 40 bucks for something that “should be” free? I’d have a really hard time stomaching that, no matter how cute they are.

I’m also really curious about what “internal or subdural use” means. Are people…implanting them?

There actually was a person or two that took the chip and implanted it just under their skin.

I think some actually tried it and was reporting on it. It worked if I remember correctly

Yes just the chip part.
I believe it was implanted in the webbing between thumb and forefinger, and it did work. I don’t know if he ever had it removed.

I didn’t remember where it was implanted… that sounds painful

That sounds remarkably painful. But whatever floats your boat!

Well that settles that, for myself and my children, we’re using our bands from 2018. My DH seems to have some strange fear his won’t work, so I told him that he can buy one, but the rest of us are not. We would be paying $100 for something that used to be free. No thanks.

I know that Disney knows there are people willing to pay quite a bit for magicbands (or they wouldn’t have made the price increase, or stopped offering free bands with hotel reservations) but they are just too expensive for me. I really want one of the Muppets 3D magic bands, but at $30 it’s above the price point I’m willing to pay. I’d probably drop $20 on that one because it is special, but when there is a viable free option- two actually, because we can get a card or use magic mobile- even that is a lot.

I did just check my magic band options linked to my resort stay coming up, and those prices haven’t increased. So the ones that used to be included are still $5 as they have been since January. It also looks like the themed selections offered to resort guests are the same price as before (I’ve been watching them, but I don’t think we’ll get new this time. We just got some in December.)

etsy and amazon have really cute wraps/decals/covers/vinyl-skins that you can put on to your MB. I’ve ordered some since I have soooo many plain ones I’d like to dress up.

I’ve looked into that. We do each have at least one themed band, some of them no longer work for the distanced readers I’m sure. I think we paid $10 and $15 for them. That muppet one just really caught my eye. I adore the Muppets and that attraction takes me straight back into my childhood. But I guess I’m not a $30 kind of fan LOL 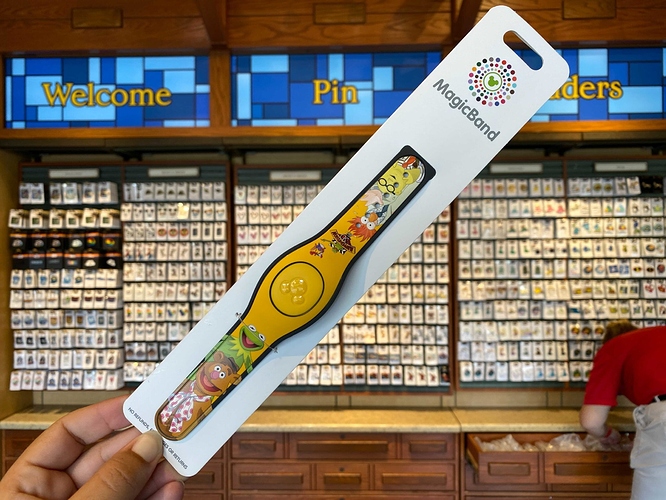 How long do the batteries last? That’s what I’d be worried about if I didn’t know. My kids are fine with the “standard” ones because that’s all they’re getting, ha ha.

He said it wasn’t. I followed the whole thread on twitter. Didn’t seem to be a big deal at all actually

Well that settles that, for myself and my children, we’re using our bands from 2018. My DH seems to have some strange fear his won’t work, so I told him that he can buy one, but the rest of us are not. We would be paying $100 for something that used to be free. No thanks.

The ones you can order with an onsite stay are still $5 though aren’t they? (did not read article). I read this as only being the ones you buy on property.

To unlock your door and tap in at parks and tap for ordering/paying at shops they last like forever (okay probably not but a super duper long time). For ride photos, I think they say 2 years.

@missoverexcited always seems to have this answer at the ready.

The ones you can order with an onsite stay are still $5 though aren’t they?

Yes, I just checked on MDE and the plain bands offered through a resort stay are still $5, and all the character/themed bands are the same price they were previously ($10-20 depending.)

Yes they say 2 years. But then I always bring up how our new ones (one plain one premium collected at the front desk) didn’t work for photos. So YMMV.

If that the case then I may be ok, but I’m not sure we would need to spend the money just to get pictures. The rest of the band should work from 3 years ago.