I wonder if wdw might do this. I also wonder if they might use this as a testing ground for opening up operations further (beyond Disney Springs).

I would love it, but I’m a bit biased since I live 10 minutes from WWoS!

AFAIK, it was Disney that originally floated this idea to the NBA who in turn pitched it to the players. It seems like the most likely locations would be Las Vegas or Orlando. However, this would probably start in July, and I think that the resort will reopen before that.

From what I’ve read/seen, players and all people involved would also be housed on property. I wonder which properties?

I think this is the only way forward. They need to keep them isolated to better ensure no one picks up C19 by going back to families/friends.

I didn’t think about the resorts, but that would be essential if they were creating a bubble. WWoS is surrounded by a lot of value resorts, but that seems unlikely. They would probably need one or two properties and there would need to be amenities like golf. Maybe the Waldorf Astoria…

I was talking to someone yesterday. One of the potential plans is to have the top 16 NBA teams play an NCAA style tournament. And that they would all stay in different hotels. I think putting every team in a different hotel would be difficult to do, not to mention stretch resources on staffing those hotels.

In any case, I do wonder which hotels would house the teams if they did go to wdw.

Update from the news over the weekend is that the playoffs would start on July 25th and run through September 30th. Those playoffs would probably follow the same best of 7 format, but prior to 7/25 there could potentially be a play-in tournament.

ha! This from yesterday

Per a report from ESPN’s Brian Windhorst, there’s a ‘good chance’ the NBA opts to go with a 16-team NBA Playoff format rather than finishing out the regular season, which would take more time, time the League doesn’t have. The seeding would work 1-16 rather than the conferences being split up, per usual. That plan would need to be passed by the NBA owners before going into affect.

I would think maybe players and owners might be leaning away from this tournament style format. Less money for both.

Saw this on a Nuggets fan site

On Friday, general managers then received a survey that would help determine what competition format the league should adopt when they do resume play:

It’s hard for me to judge which scenario would be best for the Nuggets.

Based on current proposed NHL format, I think the Avalanche would be in a good position. Avs would get a 1st round bye. Aided by the fact that they had a bunch of injuries at the time of shutdown. The layoff helped that.

I just wish the NBA and NHL would just make a final decision!!!

As far as how the resorts would be impacted, people have noticed that Coronado Springs availability seems to have been pulled for the next few months. The speculation is that the NBA players and anyone associated would be staying there. It makes sense, it’s a large enough property and it has convention space.

Interesting. When I read Coronado, I immediately thought about it being a convention space.

I wonder how the NBA intends to keep everyone involved isolated? How do you keep groupies out? Or aggressive autograph seekers?

Or conversely, how do you keep the players in?

Did anyone listen to Brain and Guy today?

I didn’t hear it all but Brian brought up a great point regarding what type of resorts would meet the language of the CBA.

Really, they’d almost have to be contained on one property completely to help ensure the bubble. No one allowed in or out that isn’t associated with the NBA. I think that’s why it’s unlikely they’d choose a resort that is near a park or has a DVC portion. They want only NBA-related staff in their bubble.

I just watched the video. It seems to match pretty much everything that I’ve heard so far. I’m looking forward to the final decision on location which could be this Friday, but it seems like they’re not really close to figuring out how they’ll actually play out the season/playoffs yet.

I thought the conversation about the hotels was interesting.

I just think it’s going to near impossible to keep people completely in or out. And groupie/superfan types can be extremely hard to keep from their goal.

It will be interesting for sure. The NBA has a real vested interest in doing so. One sick player blows up everything. Maybe for NHL unless they get started sooner.

Which is weird, given that it feels as if this conversation with the NBA restart has been going on forever.

My guess is they are having issues with the teams that would be shut out, particularly for a tournament format. 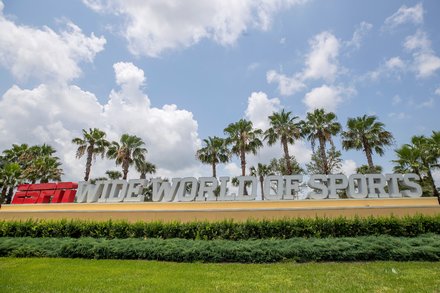 Why the N.B.A. Is Planning on Going to Disney World

ESPN Wide World of Sports, a sprawling 220-acre complex at the mega-resort in Florida, is poised to become the center of the basketball universe.

Latest rumor is that they are thinking of using AKL Jambo to host NBA players. Unexpected since I think everyone was assuming they need to open all the DVC properties to DVC to start burning up all those unused points.

The DVC portion of Jambo is very small though (which may also speak to limited availability). Also as there is only one floor of Jambo that would be in use, it may be that AKL will not open. The announcement so far has been DVC resorts will open. Nothing more. It wouldn’t be prudent to open the entire Jambo part of the resort for just a fraction of the rooms.

Still, this would impact Kidani guests (ahem, me) from use of the amenities at Jambo including gift shop, dining, savanna viewing, and pool.

Still, whatever decision they make we will adapt to.

The article ends mentioning it might just be a glitch. I would tend to lean that direction. I think AKL Jambo seems like a very unlikely and difficult choice to work with.

And in terms of isolating guests from the players…that would seem difficult not just from a DVC standpoint, but for those with AKL reservations as well.