Walt Disney - the man behind the myth

Found and watch that documentary on Netflix this week-end and thought I’d share. I found it really interesting and it had a lot of info I didn’t know and really cool ancient footage.

It was good wasn’t it! I also read Walt Disney: An American Original for a book club a couple of months ago and really enjoyed it.

Is there any truth in the idea peddled in an episode of Family Guy that Walt Disney was antisemitic?

There’s a lot said now about him being racist and anti Semitic, but the men he worked with - many of whom are interviewed in the documentary - say they didn’t feel that they were treated any differently and don’t believe that he was.

He probably did have some unconscious biases - we all do, even now, so I don’t think he can be blamed for that.

Everyone thinks they need to find a new take on history. Walt’s own daughter said he never treated others any differently. Even the guy who acted in Song of the South said there was nothing racist about Walt.

There had been a previous script (written by someone else) that was racist, and the first choice actor refused to be apart of that project because of it. When Walt saw the script, he trashed the whole thing and had an new writer start over. But because the title stayed the same, that first actor was vocal about the project being racist, and so started it’s unfortunate legacy.

Curious about this too. One of my team members at work says this often when he visits my office which is pretty decked out with Disney stuff. I’ve never heard this myself. Of note, he is the sort of individual who probably views The Family Guy as an historical documentary

The writers of Family Guy don’t just make stuff up, you know. Next you’ll be saying there are websites on the internet that do not provide reliable information. Or that some people are pretending to be people they’re not. What a crazy world that would be!

No. There’s no antisemitism. I could be a little off but it’s mostly cooked up by people who want to try and tear down Disney (these are the same people who usually feel it a badge of honor never to enjoy anything Disney-related) and they want to make you feel bad for it too.

It was started because he was making war cartoons but he didn’t want to do it. In short: he wasn’t all in on the war effort so obviously that must make him a nazi sympathizer(natural logic, amirite?). And if you’re a “nazi sympathizer” then obviously it stands to reason you hate the Jews.

Though the reason he didn’t want to do the cartoons was because it was a burden to him as it took his animators (what ones were left) out of projects he felt they should actually be working on as well as it didn’t pay very well, but to keep the studio afloat, he did it(and very likely complained about it).

The only real negative thing Walt was truly guilty of is him using the Communism fear of the time as a way to get back at the people he felt betrayed him. That was a bad move on his part. The PBS documentary on Walt goes into this pretty well.

I’m a big fan of Family Guy, which can be highly creative, intelligent and witty.

But they do have a habit of making nasty, unwarranted attacks on celebrities, often to do with physical appearance. Maybe the Walt Disney thing is part of that. And he’s safe to attack as he’s dead.

I wouldn’t worry about it too much. After all, they lampooned Adam West a dozen times over and HE was a part of it.

It’s just the usual formula of being able to go after an easy joke. Just as Disney themselves are now going after themselves for the “princess in distress” stereotype.

I wouldn’t worry about it too much.

Not everything Seth Macfarlane does is brilliant. But some of it is. He’s a pretty creative guy. Clever and witty, too. Kinda cute, also. (That last point may not strictly be relevant.)

We have got to do something about your taste in men.

:snort: I read that as “do something about your tasting men.”

oohhh it’s going to be one of those days. 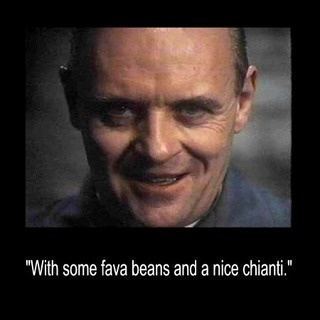 One myth that I grew up with was that Walt had been frozen after his death until science could bring him back to life. This is just here in polar Canada or it’s been said in the US too ?

Anyway, I was sort of relieved at the end of the movie when they said he’d been cremated…

Oh, that at least his head was frozen is urban legend all over I think.

Went to a dinner Saturday night with fava beans as part of one course. This line may have been said more than once…along with the accompanying sound afterwards.

But did you have a bottle / glass of chianti?