The last time I went to Disneyland was when California Adventure was under construction. I would like to stay at a non-Disney hotel in close walking distance. Looking at an aerial map, I can’t tell where a walking entrance would be. From South Harbor, is there just one way to get in on the long block between I-5 and W. Katella? Thanks!

I should clarify, I’m looking for the entrance to Disneyland, not California Adventure. Thanks.

Hello. Yes, there is only one entrance into the parks from Harbor. The entrance is at a huge intersection between Park Vue Inn and the Best Western Park Place Inn by the IHOP. Look for these 2 hotels on google maps and you will see the main crosswalk. You cross the street and walk past all the bus and shuttle stops until you get to bag check. Once inside bag check DL will be on the right and DCA will be on the left. Downtown Disney will be straight ahead. Anywhere on Harbor from the Howard Johnson (just south of the freeway) to the corner of Harbor and Katella is an easy walk to the parks. The ideal locations are the ones closest to the crosswalk by IHOP. Hope this helps you.

Thank you so much! I really want to walk, but we’re just not morning people. I want to be as close as possible without spending the $$$ for a Disney hotel.

I highly recc Best Western Anaheim Inn, if $$ is right for you. Pretty decent breakfast, five minute walk to entrances.

The map at this link is what helped me visualize the area the best when I was looking. The red square is the pedestrian entrance, and as mentioned is the same for both parks! The ones right across the street from the entrance are actually closer than 2 out of 3 Disneyland hotels so if proximity is what you want, they are the best ones (except for the extravagant Grand Californian that has an entrance directly into DCA).

Thank you! That map is really helpful. I’ve also started looking at a few properties that are farther away. It’s so hard to judge the distance - the impressions of each reviewer can be soooo different! One says - a quick 10 minute walk to Disney and another says - a 10-15 minute walk to the shuttle to disneyland. It makes me wonder if the review is posted on the wrong page! 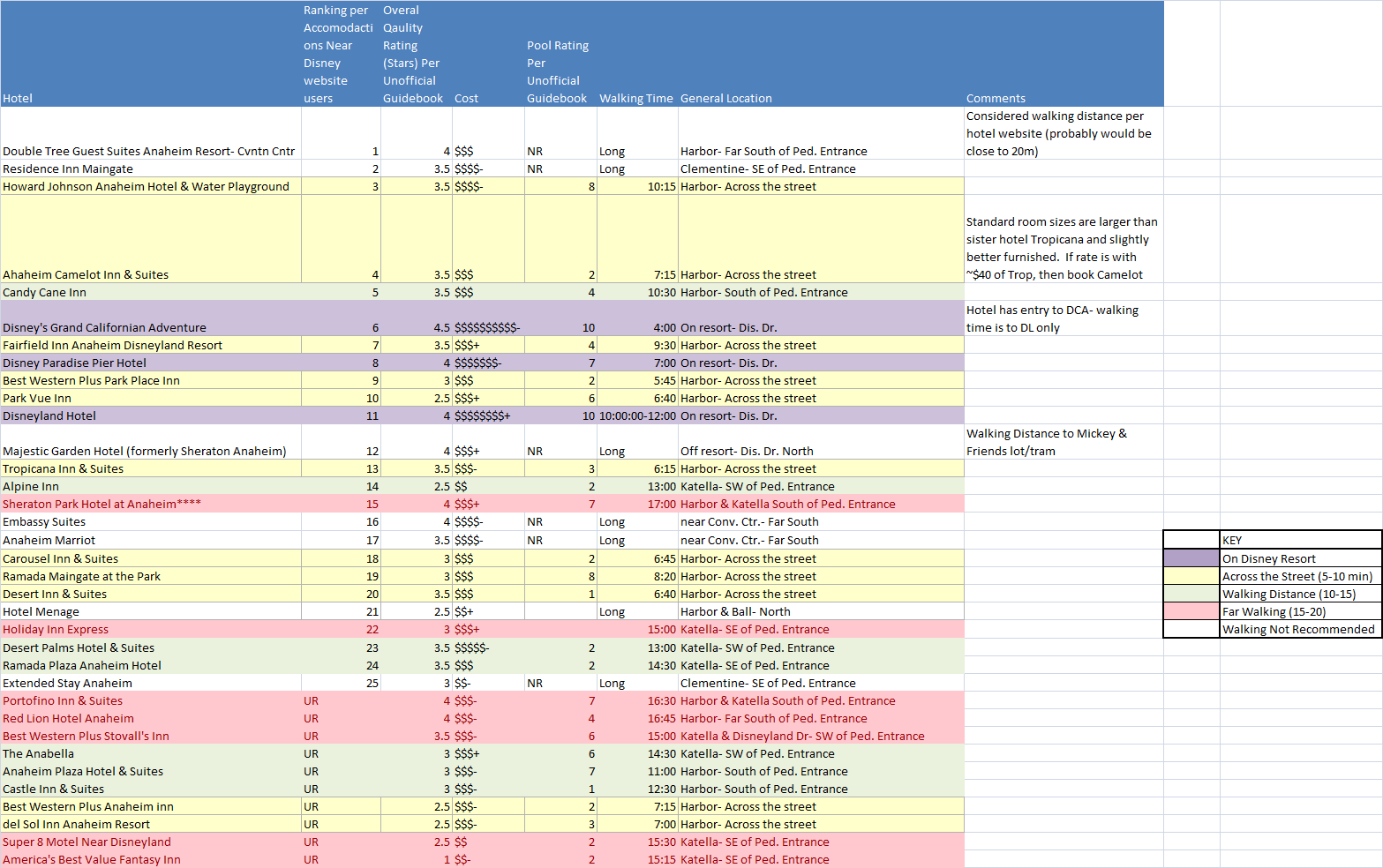 Thank you!!! This is super helpful!

I just booked at Springfield Suites by Marriott on the corner of Katella and S. harbor as a backup, but I’m still searching. Many of the close hotels are all booked and the bunk bed suite had a really good price w included breakfast.

We stayed at Hotel Indigo that is at that same corner (Harbor and Katella) last summer. Really nice rooms. Not sure if they have any kind of bunk-bed or higher occupancy room if that is important to you.

We will have a party of 4. I am traveling w my 11 yr old daughter, 10 yr old nephew and one of my sisters. My nephew’s parents won’t be along, and I don’t know how he would feel about sharing a bed w one of his aunties! He might end up in a sleeping bag on the floor if we have a regular 2 queen room. The room I booked has 2 queens and a 2 twin bunk, (plus a sofa) so it’s looking pretty attractive right now.

How safe is walking around at night? We want to stay at the Camelot in October but it will be just myself with 2 children. Is it safe for me to be walking to and from the hotel?

You’ll be fine, other guests will be doing the same thing. Harbor Blvd is a busy streey.

I know this post is 3+ years old, but I didn’t want to make another topic since this was already here.

I’ve mentioned before that my DW will want to take breaks while I stay in the park. Should I escort her back to our hotel, for safety, in the daytime? (The Anaheim Hotel) I will definitely go with her if she wants leave any time after sunset.

Or is there a convenient ride share pick-up area outside the entrance? Or should we walk to the GCH and get her picked-up / dropped off there? The Unofficial Guide says GCH is the best ride share pick-up / drop-off location for DLR/DCA/DD. I know it’s only a couple blocks, but I’d rather just have peace of mind that she’s going to get back quick and safe.

I know it’s a busy area and should have lots of people around, but I live in a city that has a high crime rate. When you come to Memphis I can tell you that you shouldn’t walk alone day or night, even in our high traffic tourist areas.

I go to DL solo a lot to meet up with friends and have never had any issue walking back to the Harbor hotels at all times of day. By the time you walk to where Lyft/Uber pick up, you are only a few minutes from the Anaheim hotel. There are so many tourists in the area, so she will never be walking alone. It is quite safe, there are the usual Disney “beggars” who wait outside the gates at night, but it is literally the same people every trip I go on. There is the guy with his maybe 4 year old son that has been there for years (since his little one was a baby), the saxophone player, the guy who sells water from his large cooler, and the guy just across the crosswalk that has the light up boomerang thing that he throws up in the air. Seriously, these people come to the edge of Disney property every night, it is how they make their living! Friendly enough, never seen any issues. I feel completely safe when I am alone, with girlfriends, or with my kids and/or my husband. @lolabear_la probably knows all of these usual regulars too as she goes to the parks a whole lot.

Anyway, your DW will be fine but if you are worried, it isn’t far for you to walk her over.

I know it’s a busy area and should have lots of people around, but I live in a city that has a high crime rate.

I have never felt unsafe walking on the streets right around Disneyland (including Harbor), but if you venture off the beaten path, no further guarantees. Just stay on the well-manicured streets that I’m sure Disney pays to keep up. Also caveat that to be during or just before/after park operating hours when other tourists are there.

@Wahoohokie I can picture ALL of their faces as I read this!

Sidenote: I feel so bad for that kid and there hasn’t been a trip in the last 4 years where I haven’t seen them. Maybe once when it was raining we didn’t see them, but we’ve been more than once in the rain & seen them still and late at night while the kids is sleeping on his shoulder too.

Anywho the only other regular vendor I can think of is the bird man who was gone for a long time but is now back. And maybe it’s been a while since we’ve encountered him but it seems that he has gotten way aggressive about having kids interact with his birds (presumably to guilt parents to get tips…but we always strategically avoid him & instruct the kids not to look or accept anything from anyone to avoid such an interaction).

So yes, this “street vendor” crowd will be the only real city life vibe there and not at all dangerous.

I feel like anytime between 8am-midnight will be EXTREMELY safe with plenty of tourists and even up until 1am you’ll still have Cast Members coming off their shifts walking to transit along Harbor (and many of them head right to the Anaheim that late as The Pizza Press on-site at the Anaheim is a go-to destination after work). We have even been up & about on Harbor more than once at the odd hours of 3am-5am (mostly for limited edition merchandise release so we weren’t the only ones up & about) and still felt very safe.

Thanks everybody. I kinda suspected this would be the case since Anaheim / Disney has a lot to lose if they didn’t upkeep the area.

But in case you come to Graceland someday… don’t leave that campus - especially at night. Elvis built his home in what was a nice neighborhood. However, hard economic times and neglect over a number of decades has left the surround area in decline. I was a tour guide there in college and speak from experience.