Tron Lightcycle vehicles are being run through the track at speed today for testing.

We can use this thread to post additional updates for Tron. Will it open in 2022?!

When will Tron open?

I answered January because I was assuming they would want to say “look- we have this special thing for the 100th anniversary of the Walt Disney Company” but I just read that D23 will launch the anniversary so maybe October……I think I will change.

I’m sure the timing will be different for Tron. But if it’s any indication, it is five and a half months in between the first GOTG test run and it’s opening. That would bring us to late September for Tron…

It’s really a wild guess at this point in time. They may be running cars, but we have no idea how complete the interior is. I’m guessing that they will shoot for the Holidays - or - they will wait until January to draw more people in during the “slow” months. Of course I’m hoping it’s before my late July trip, but I think that’s a very long shot.

I’m hoping it’s before my Christmas trip. At one time Tron was meant to open before GotG, which I would have preferred.

I have a very slim chance of going to wdw just before christmas so I’d hope for nov-dec, but I think early next year is more realistic

I think Disney would like it to be open by October 1, but probably more realistically sometime after that. If it is much more after that, though, I can’t see them opening something up fresh just as the crush of Thanksgiving and Christmas crowds hit…

I picked between Oct. and Dec. Partially out of hope since we will be there early December, but also because I think it is possible. The interior of Tron is likely close to done. Not a lot of complexity there…mostly just lighting effects. And they working like mad on the outside now.

Didn’t rise open in December 2019? I thought I remembered it opening when I was at Universal.

How long did it take Universal to open Velocicoaster after it started testing? I know that opened in June and I remember trains going when I was there last April. I’ve got a trip in early September, but that may be pushing it. I think the key won’t be the testing so much as the other construction stuff being done.

I wonder what @lentesta thinks.

I know that opened in June

Officially…but actually, we rode it in mid-May, so it unofficially opened a few weeks ahead of the official opening date.

I think the biggest roadblock for finishing Tron isn’t really going to be the coaster testing or interior of the building itself, but the amount of work they need to get the exterior pathways and tunnel finished, plus the train running through there, etc. If they make fast progress there, we might get a better sense of how soon it will open. As of right now, the pathways aren’t done, nor is the tunnel for the train, let alone the landscaping around it all.

Ooh, if it was Oct 1, I could get in on another AP Preview. Although, we are tentatively planning to go to the UK in September + DLP. Will make that decision in the next month likely.

My boys were able to ride soft/preview mid-may also…they happened to be walking past and saw the line and got on!
no crazy email lottery if you were in the park you could ride

This guy thinks Tron will do previews in late August 2022 and will be open before October 1st.

@tommyhawkins
Perfect timing from @bioreconstruct just before I do my final Tron Update and new prediction. Trains were seen with Dummies on this week, which says Disney has accelerated even more than i thought, heres my opening date projection: https://t.co/T8y3IgTGVK 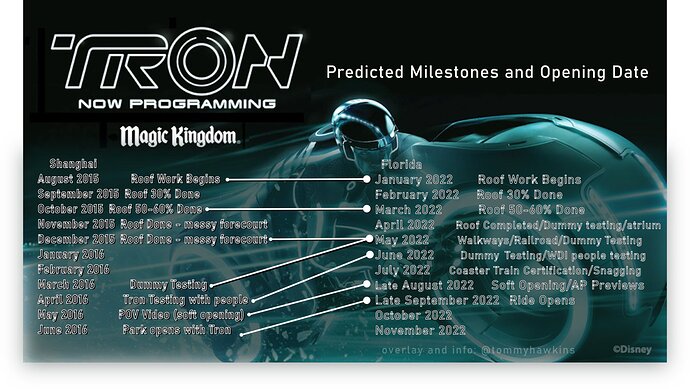 I just want the railroad back.

Tommy Hawkins is on the ETicket Report. He is from the UK. He seems to have connections at Universal. I like listening to him talk about. Epic Universe.