Last year we took a day and experienced Universal for the first time. I knew about the lockers, so I wasn’t surprised that we needed to use them. The issue was that they were different for each attraction! Drove me absolutely nuts! Some I needed my ticket, some I had to use the bar code on my drivers license, there was one where I had to create a pin I think. I assumed once I used the lockers once, that it would carry across all the rides. Nope! I had to get a team member to assist for almost each new attraction we went on.
Needless to say, next time we go I plan on bringing next to nothing so I have to use the lockers as little as possible. What does everyone else do to minimize what they carry? I’m thinking about getting a wallet case for my phone and just bringing that in the park and saving any shopping for after the rides/end of day. Any tips from the pros?

I agree the locker situation at Universal is annoying…but part of that is because lockers are required on rides at Universal, unlike at Disney, and each time they install a new set of lockers, they seem to try a new way to manage them. And while I do think the newest lockers are the better ones in general, it doesn’t change the fact the older ones are still in use.

As such, we do try very hard to avoid carrying bags into the parks. Trouble is, UOR is also overly sensitive about carrying ANYTHING in your pockets unless those pockets zip closed. This change seems to be somewhat recent, because, for example, in past years, I had no issues wearing my insulin pump on Rip Ride Rocket. But in August, they refused to let me ride with my pump unless I put it in a zippered pocket…but I explained to them how if I put it in a zippered pocket, the tubing could pull the infusion set out and that would basically end my day at Universal. They didn’t care. I also demonstrated how when my pump is attached to my belt, it was practically impossible for to come off. They didn’t care. Ultimately I just couldn’t ride, even though I had been on RRR countless times in the past (not to mention hundreds of other coasters far more intense) with my pump. Alas, I learned from my mistake and when I got to Hulk, I dutifully put my pump into my pocket. And then after passing through the metal detector area where they check this, I put my pump back on my belt where it belongs and rode without issue.

If the line is short enough this time (next week), I’ll disconnect and stick my pump into a ziplock baggie and store it in the lockers to avoid the mess. If the line is long, that may be more difficult (because I would be disconnected for too long), and I’ll have to resort to the Hulk method.

Well…wow. I kind of veered off topic there. What was the point? Oh, yes. Lockers.

Some rides that mandate lockers (such as Forbidden Journey), it only applies to loose items. But if you have things secured in cargo pockets or perhaps a waist pack, it is not an issue. It really is just the coasters where you really do have to remove EVERYTHING from your pockets, etc. And a waist pack will easily fit in the free lockers in that case.

We played around with carrying nothing. But, then we really like carrying around the freestyle cup, so lockers it is for us. The fanny pack worked for everything I wanted to carry, ie sunglasses and phone. The ticket barcode seemed to generally worked though.

I heard a rumor that the new ride has the lockers shortly before you get on, and when exiting you get your stuff from the backside of the locker. That sounds dreamy. There was an AP preview for it while we were there, but weren’t able to get on it.

When did you go last? All lockers have switched over to ticket entry.

Yeah the lockers can be annoying but every one we’ve used this week works exactly the same-ticket barcode. They seem to be dialing it in more with each new ride-it works super smoothly at velocicoaster with lockers right before you board that are double sided so you access from the other side when you leave, so you don’t have the same congestion.

I’ve used room key barcodes and park tickets. I never had a problem except for one or two times.

No more finger prints? That is great news!

The only lockers I remember seeing with fingerprints were at FB, and I think they replaced those with the newer locker style when they opened the new lockers.

I went in March and the locker inconvenience was well worth it just to be able to carry bags and things we needed. Our laminated tickets worked at every locker.

The only place that got us confused was when exiting Hagrids and where exactly to go to retrieve our bags. But I blame that on covid.

I’m sure quite a few still used fingerprints on our last trip in Aug 2019 and they were a nightmare.

For those wondering, the “ticket” lockers use unique barcodes to open the lockers. Any barcode or QR code will work, but universal makes it simple and says “tickets”. If you use a digital ticket then universal will provide a physical card with a barcode or QR code on it to use.

I’ll add:
These sling bags worked great for the free lockers. Each have 2 small cup holders. And these type of tickets with the QR codes are the ones used for the lockers. 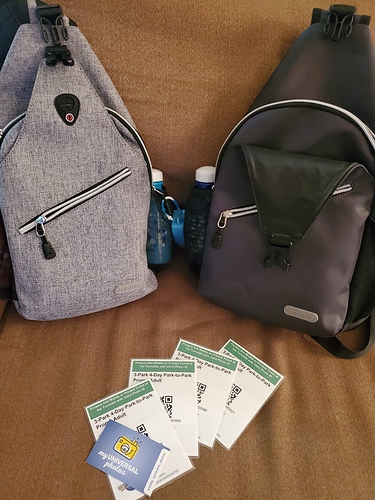 The tickets we are using having bar codes not QR codes.

loose items… what about eye glasses?

They don’t make you take them off. I wore mine on some rides and tucked em in my sports bra on rides like velocicoaster.

For Disney, I always have my purse and backpack with All The Things.

For the OI after hours meetup at UOR, I’m planning to attempt to go the other extreme.

We’ll see how that goes! But with minimal lines, we won’t let the DS11s bring their kindles and won’t need the larger device chargers. We’ll sunscreen at the car once before entry. Food and drink will be provided. Going to try to make it work!

Bringing one lanyard for locker ticket(s). Eyeglass straps for those that need them.

I’ll have a small waist pack for my phone, with a small charger/cable, credit card/ID, sunglasses. Polling tonight who wants their own waist pack or zippered pockets or pass their phones to me for rides that allow that. That’s all that should need to go into lockers for the wet and 3 no-item rides.

We’ll have a mesh bag for flip flops for the water rides that we can just leave on DM’s wheelchair. Maybe a string backpack with rain ponchos as well.

We did probably want to get a wand, so that could be an issue. Will that fit in the free lockers? Hopefully keep our shopping to a minimum.

what about eye glasses?

I always ride coasters with eyeglass bands on to hold them in place. I see people wear glasses without them, but I’ve also been on coasters where I’ve seen people lose their glasses on coasters, so I would never want to risk losing my glasses. I just rather not even worry about it.

Yeah, DH had his come off on a zipline once. Luckily, it was the second to last zipline on the course and the area was easy to access. We always use them for the parks. 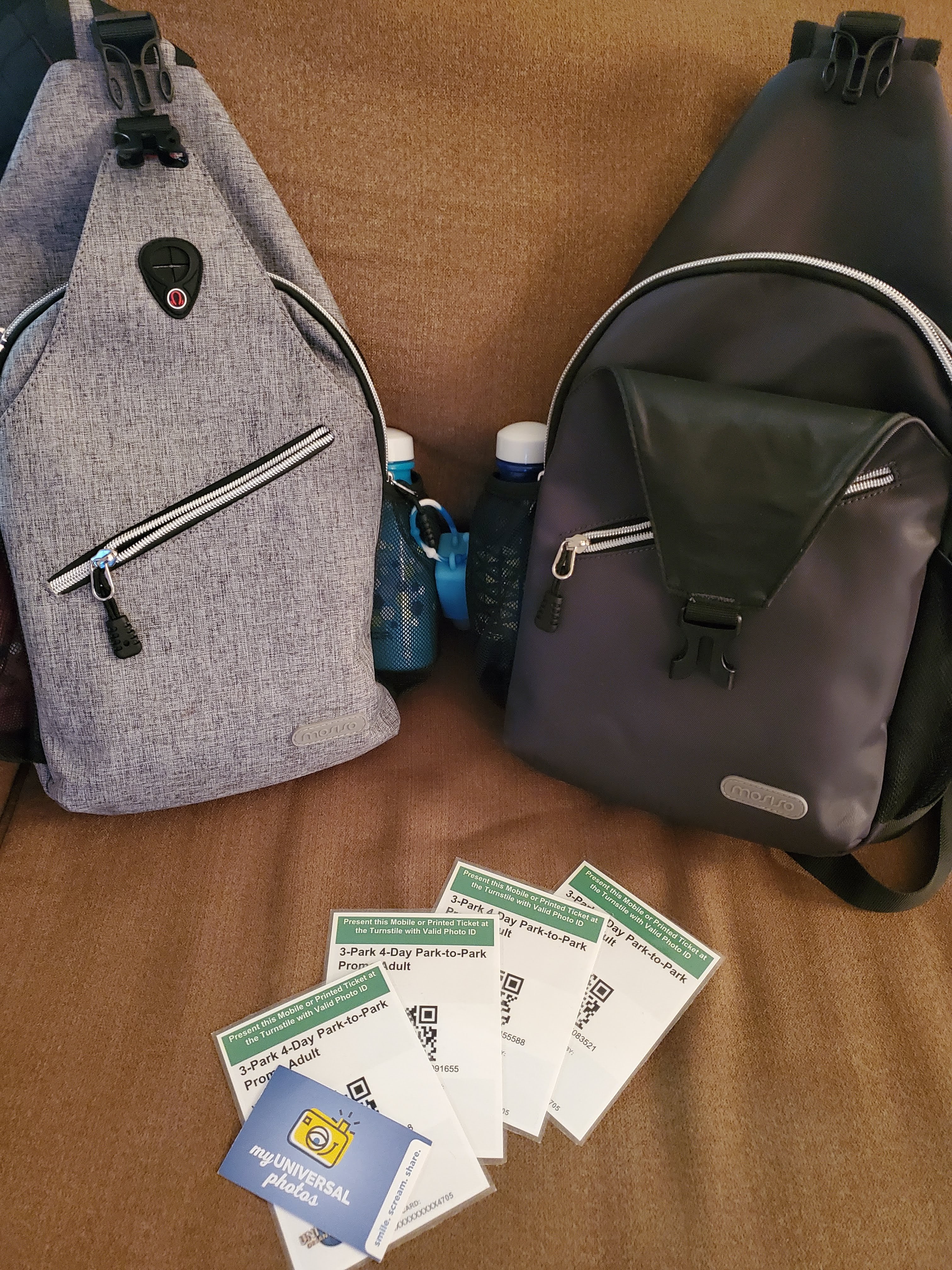 I’ve been thinking about asking if anyone has a recommendation for a masculine-style sling bag. This is probably a little bigger than I had in mind (I basically want to carry a battery for my phone) but I’ll look into this one.

I swear by the lands end string backpacks. They half everything I need for a day but are small enough to fit in the free lockers. They also aren’t too big so unless you pack it with water it’s not too heavy. I have used these on two Universal trips and one Disney trip.
I’ve also used them on day trips to Hersheypark and when walking to visit family (30 minutes walk away)
https://www.landsend.com/products/kids-packable-drawstring-bag/id_337381