Here is my dilemma. I don’t particularly want to ride the buses and would prefer to walk so Cabana Bay wins here. It also seems like it has better pools and food and more to do, so a win for teens. However, the layout and the design of Surfside’s room wins hands down with more light across the whole room, light pastel calming colors, and a separate parent bedroom. I do not like the bright colors of the Cabana Bay and I really like the idea of having a real honest to goodness door and our own private bedroom away from the kids. I’m a bit concerned with reviews of the firm bed, firm pillows, scratchy sheets in Surfside, however. Has anyone been to both and have opinions that might help with my decision?

We stayed at Surfside Family Suite. Overall, it was a lovely resort and the use of the buses was no issue whatsoever. Super convenient.

Having the separate room was nice. But it isn’t perfect. There isn’t a ton of accessible storage (meaning, places to put your clothes while you are there), which was annoying. For a short stay it was okay. (We did 3 nights.)

As far as the beds, they weren’t nas comfortable as the ones as Pop Century, but they were still comfortable. The biggest issue was the pillows. Really didn’t like the pillows. And the blankets weren’t so much scratchy as inadequate when the air conditioning was running, since the air blows right on you.

I would definitely stay there again considering the price if budget matters. Having the kitchenette was nice, as was the Starbucks in the lobby. The food place was okay. Not great, but also not bad. A little confusing. But honestly, Pop Century was worse in that regard.

The pool is…well…a pool. Nothing much about it other than it is a place to swim and cool off a bit. (Unlike the pool at Pop Century, which was so warm it literally felt like bath water getting in.)

I cannot speak at all to comparing it to any other Universal property, since this was our first time staying on property.

Here is a link to the post from our trip report starting from where we arrived at Surfside.

Chapter Six - In which a family draws close, then walks the City The husband decided it was time to make this a more traditional trip report and will drop the storytelling method for now. We got up early and had to head out by 7:30 so we could make it to the airport about when DS and DIL were arriving. Had breakfast at McDonald’s again, and then made good time in great weather. Their plane landed a little before 12:00, and we picked them up around 12:40. At this point we squeezed into the v…

Thanks ryan1. I know it’s weird and normally I don’t mind the buses but I feel like they are more confined and poorly circulated air than the rides and shows which worries me but I have read it’s less than a five minute drive. Perhaps, we can work on holding our breath that long. Lol. We are driving so I can just make sure to bring some pillows and blankets and that’s an easy solve. ;-).

When we were there, at Universal, they kept the air running full blast to keep the air circulating. It was actually rather frigid. But it is a very short trip.

I’ve been to both and stayed at both. Personally I find myself gravitating to Endless a lot because of the separate room is great for couples/parents while the kids can be in the main room. The towels and sheets are thin (less scratchy) and the pillows are weird, but that’s manageable with a blanket.

If you want a RESORT, go to Cabana Bay; there just is more there. If you want a place to rest your head, maybe get food, and that’s it then Endless is a great choice. As said before the bus from Endless to the parks is quicker than the one from Cabana.

Thanks. We decided on Endless since we will be at the parks everyday and for the room layout. Not too much time in the resort itself this time around which I may regret not having a rest day. I usually do but parks are also usually open much later so I may be okay too.

At Endless, are there two bedrooms? Or is there one bedroom and a main room with a bed in it?

It’s one main room with two beds and a kitchenette area with picnic table and then an actual bedroom with one bed. It’s actually a great setup for us with two teens who don’t want to share a room and then hubby and I have our own room. But it’s not as comfortable as a deluxe resort. 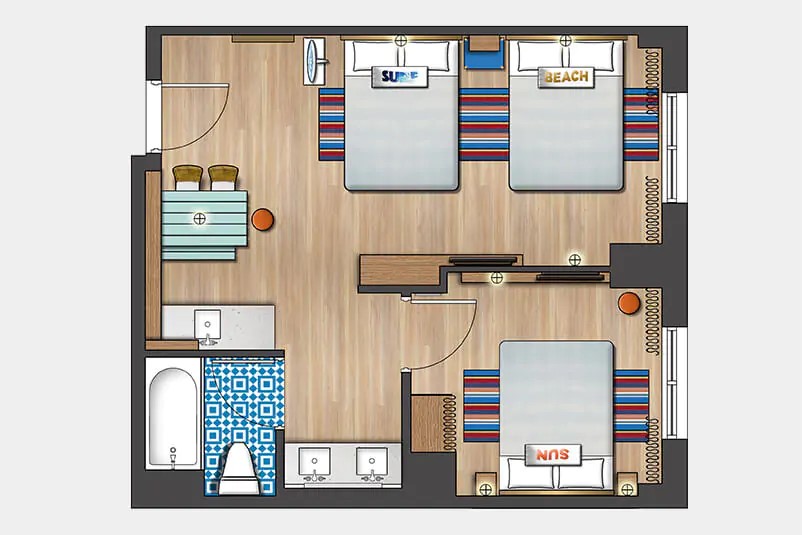 Thank you. That would be a bit cramped. But it is good to know.

I much preferred when we were at Disney in the studio suites honestly but the kids preferred this setup. To me the nicer decor, thicker walls(woke up to a screaming baby one night and another it sounded like someone was bowling above us for hours upon hours), better bedding, more pillows and more comfortable pillows, mattress and towels make it preferable to have just a single room. But I wanted to give this a try and it’s amazingly cheap. It’s a bit like a step up from dorm room quality and I wouldn’t stay here again. We spent two nights in Cabana Bay which I preferred and Hard Rock and Portofino are still my faves for Universal and the Express passes for a family of four which I ended up buying anyway we could have had the nicer hotel.