Hey everyone! I rarely post here (ok, pretty much never - I really joined for the Touring Plans) and I am not a writer, but I thought that I would share a few things about our latest trip.Maybe someone will find it helpful.

Accommodations: We stayed at the Caribbean Beach for the 4th time - we just love it there! We were in Trinidad North for the first time - we have always gotten preferred rooms in Martinique but they are renovating it right now. Our rooms were about a 4-5 minute walk from Old Port Royale, where the food court/gift shop/ main pool are located. We had two first floor adjoining rooms that faced a courtyard. The rooms were in pretty good shape, though I did notice that the cabinet door that hides the refrigerator was getting a bit worn. Eventually, they will be renovating these rooms as well. I wanted to stay in one of the renovated rooms - with Queen Sized beds!, but my husband didn’t want a long walk so we stayed with the preferred rooms. CBR was great, as usual. Mousekeeping - super clean, several towel animals. Staff - friendly and helpful. Selection - plenty of food options. We would stay there again!

Here are some general thoughts:

New (to us) rides. The Mine Train was…well, it was ok. The seats were not too comfortable for a large person (I wear 18W jeans and my knees were not pleased at the squish!). The ride was cute but a little…disjointed, like it was trying to be two different rides at the same time. Under the Sea was great. The line was the most beautiful we’ve seen in WDW and the ride itself was lovely - like the Nemo ride in Epcot but way better. The audio-animatronics were fabulous!

We were on the (not “free” like in the past but heavily discounted and a great value for our family) Dining Plan but saving our snack credits for actual snacks and buying bottles of water. It started to get expensive! We bought some pks of 12oz bottles of Dasani Water in the gift shop which saved us a boatload of money! We would each throw 1-2 bottles in our bag in the morning and it was great.

Phone charging - My Disney Experience ate up a lot of battery power so we charged our phone a lot. Best places were: Charging Station by the Rapunzel bathrooms near Columbia Harbor House. This was the best place to charge! Comfortable and beautiful! Another charging area is inside the gift shop attached to Space Mountain. Not enough seats, but plenty of outlets. In Epcot in England there is a chain of stores that ends with a room with the Kid Cot table. There are two comfortable wing chairs and many outlets. One evening we sat, charged and listened to the Briitish cover band through the open door- sweet! Other than these stations (I am sure there are more but we could not even find the Space Mountain and England ones on a park map!), we kept a look out in every QS place we hit and we always found a table near an outlet.

The Crowd Calendar was DEAD ON. Use it to plan!! Crowds were light for most of our trip except for Martin Luther King weekend and knowing when to plan what just made everything run smoothly.

Magic Bands: worked very well. Really well. We all wish that we could use them in our daily lives for stuff. However. Disney really does know where you are every single second. When going over our PhotoPass pictures, we found that they had included several shots of us on rides like the Mine Train and Big Thunder Mountain… Not that we asked for these, but because of the FPs and Magic Bands they knew when we rode, and I guess they have some face recognition tech? Kind of creepy…

FP+ - some Glitches. One day in the MK, the system was down on and off. When I went to get on line at the kiosk near Stitch, I was told that they had closed the line. Later, I tried again at hte kiosk in Frontierland. I was on line for a while before I found out that they could only give me a FP for my self, not my entire party, and that we would all have to get on line. I didn’t mind the system being wonky but I wasted a lot of time standing in that line!! Generally, the machines in the kiosks were so difficult to use that they had a cast member stationed at each one. Other times, in both AK and DHS, the machines were down and they had cast members with tablets to help instead. Other things were not glitches, but were not as easy for us as I would have liked. They don’t allow you to make new FPs on the app after your first three are used up. Maybe I should have known this but I didn’t remember reading it anywhere. I wasted a lot of time on that app, trying to do something I couldn’t do! Also, park hopping was not as easy as I had hoped, as I couldn’t make a new FP for, say, AK, while I was still at DHS. More than that- I could not make 2 for DHS and then head to the AK for my third - they told me I had to make one more for DHS and just let it expire. Kind of strange, I thought, that they would rather I make one that I would not use! But the Cast members were extremely helpful, so I would say that the system worked as well for us as the past one did, in terms of how many we got each day.

The new (to us) afternoon parade the the MK was such an improvement over the old parade. Really - it was worth waiting and watching! Since we are not fans of the Electric Light Parade (we prefer Spectromagic!!) it was great to be able to enjoy a parade.

I guess that is all I can think of for right now. I will be back with Dining reviews - my daughter has a lot of food allergies and I wanted to share how well that went for us!

Thanks for taking the time to write about your trip!

Thanks for sharing it’s always fun to see how everyone else’s trips go. Just so you know they use the RFID chip in the magic band to know when you’re on the ride. They can tell which seat you’re in so they know which picture to assign to you. It’s not quite so creepy that way lol.

Also the ability to book your 4th FP and beyond from the app is in the works with no real date given to us yet.

Glad you guys had a good time!

Great report! Thanks for sharing! Looking forward to your dining reviews.

Still waiting on my daughter for her comments on the various allergy friendly options she found. In the meantime, I thought I would share a few pictures.

Our best character interaction was with Gaston. He spent a lot of time with our girls, joking and flirting a bit. 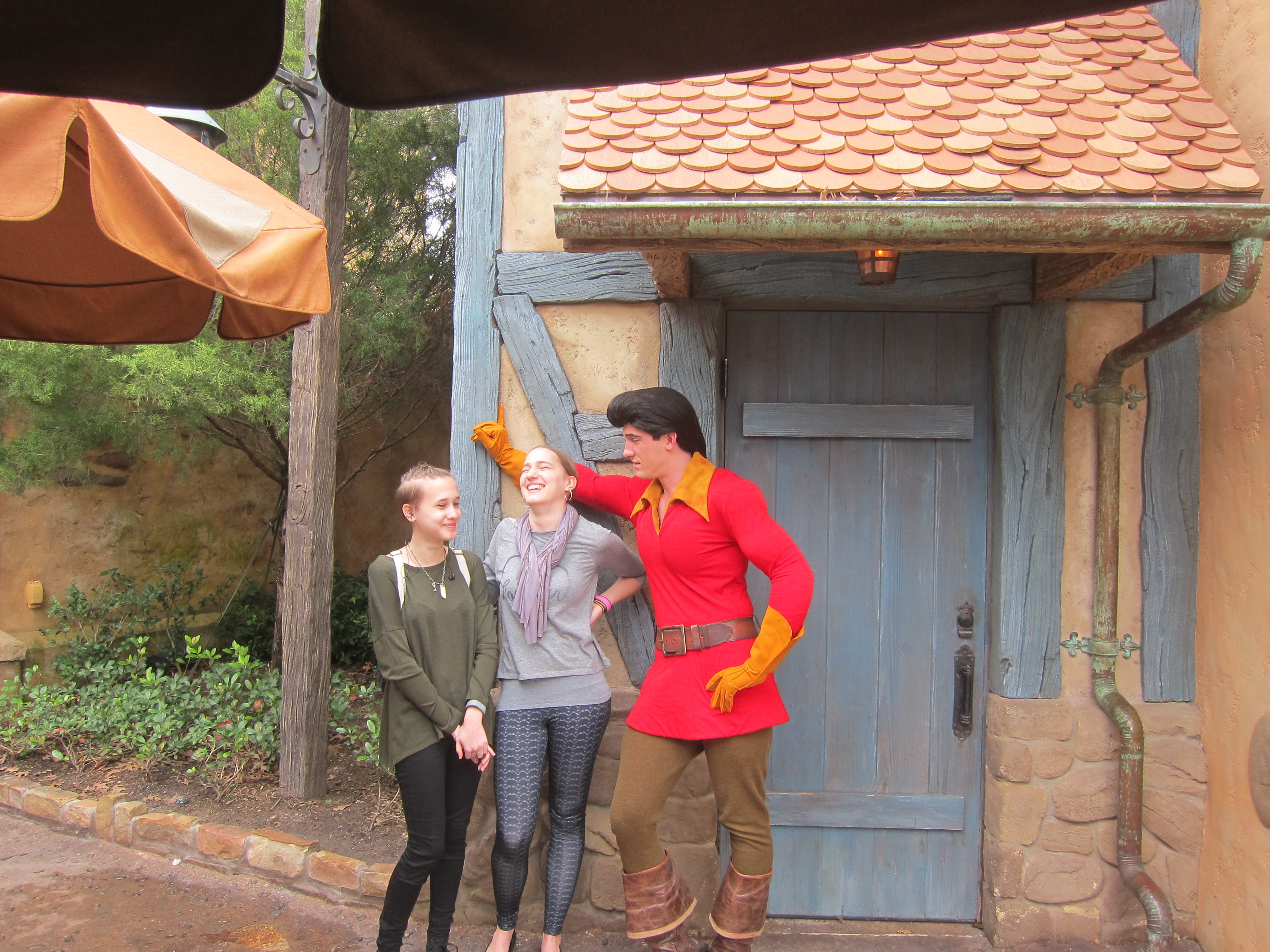 This Cast Member at the Haunted Mansion was a scream! 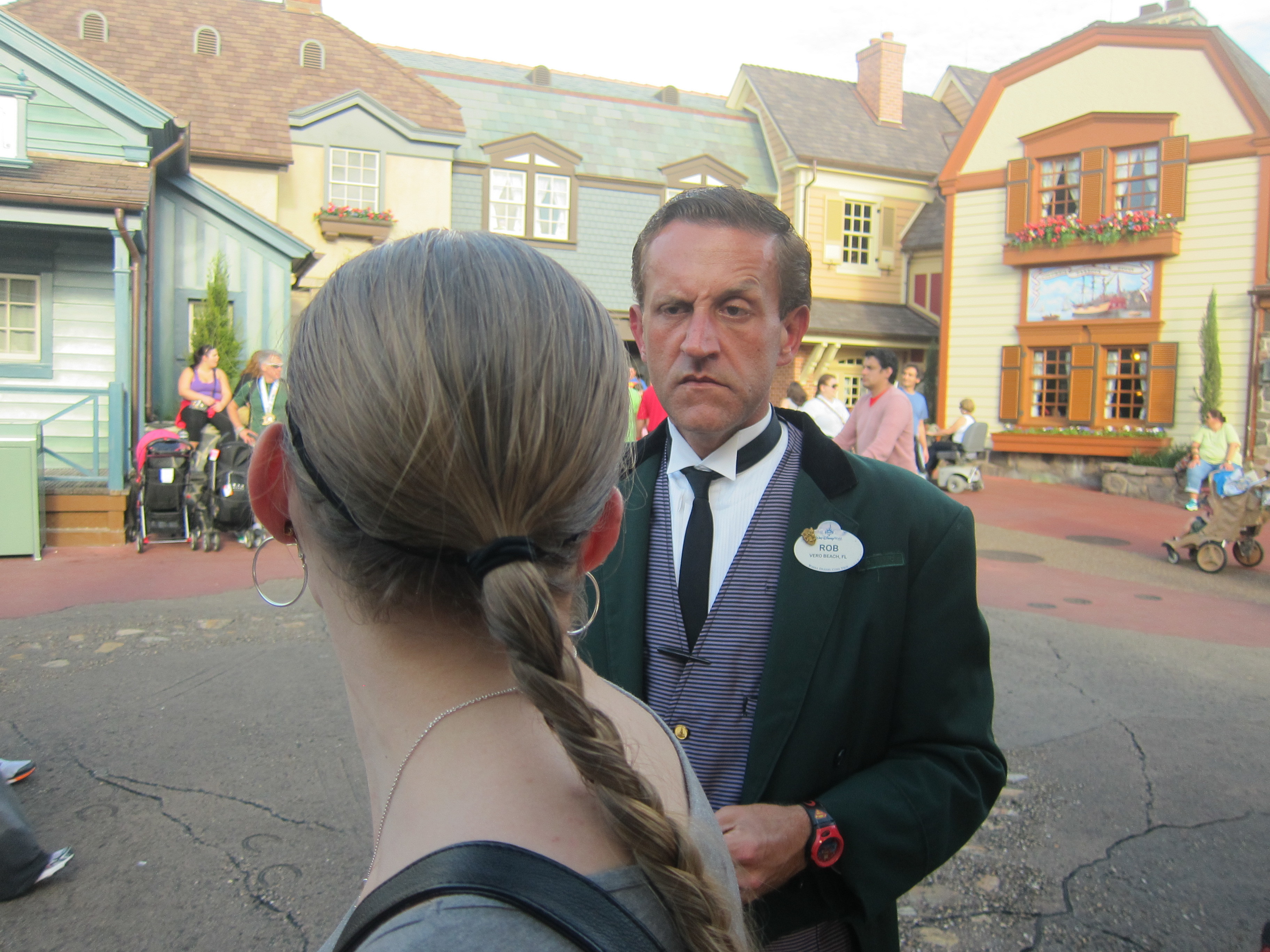 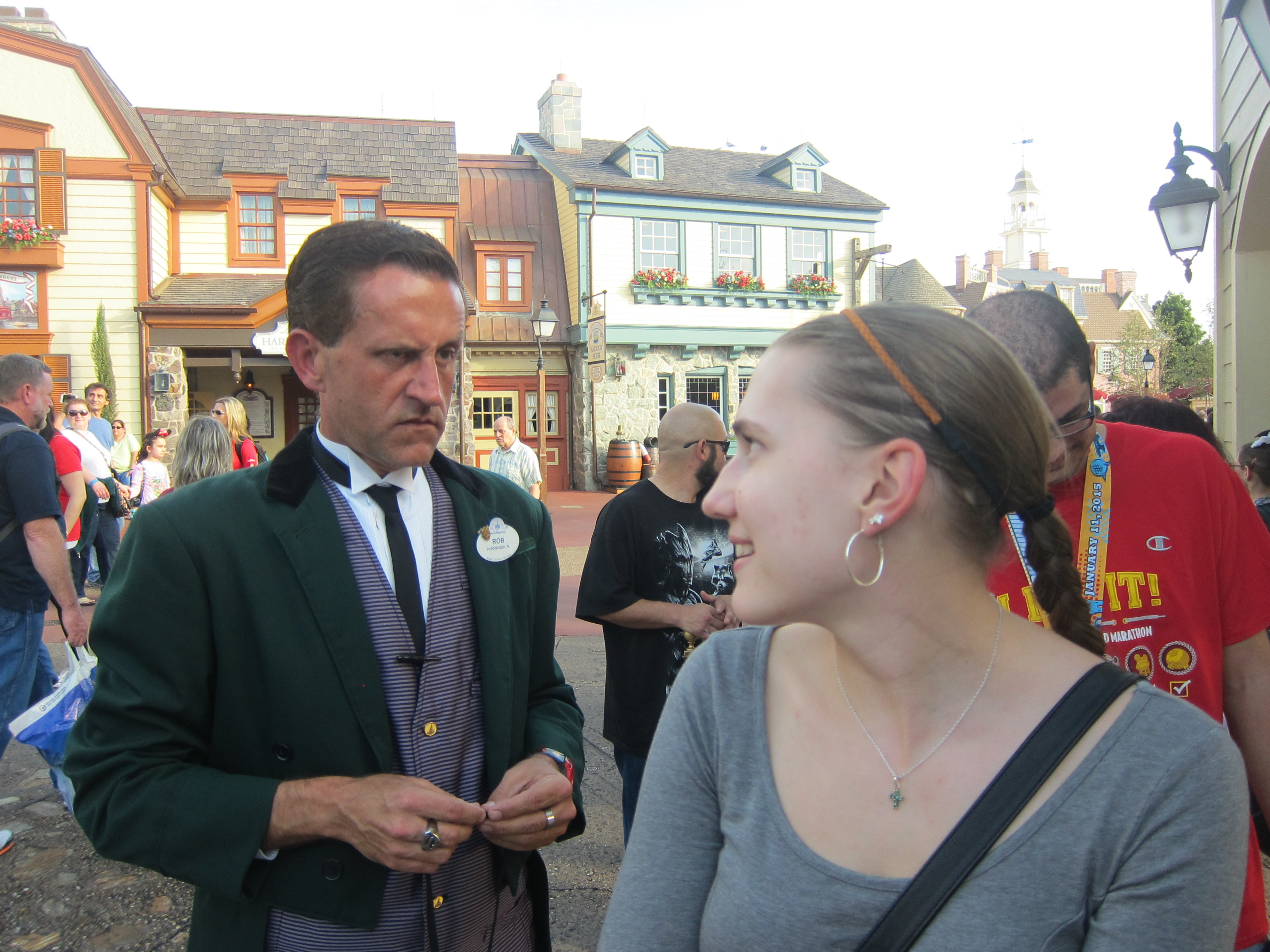 We took a peek into Merida’s…alcove? Whatever they call it!!..when it was about to be cleaned one evening. 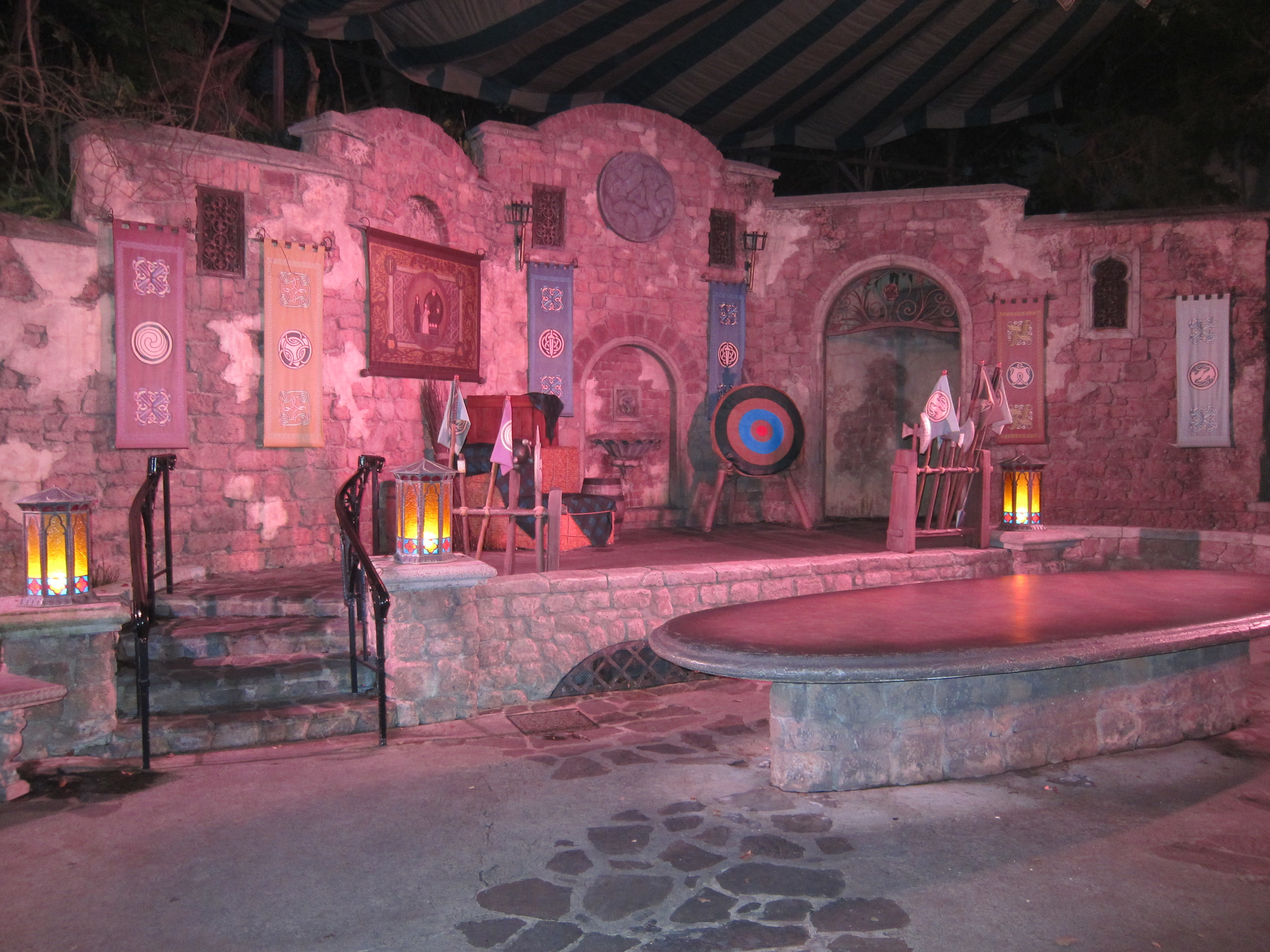 The dragon in the Afternoon Parade at the MK was so fabulous, we watched the parade twice! 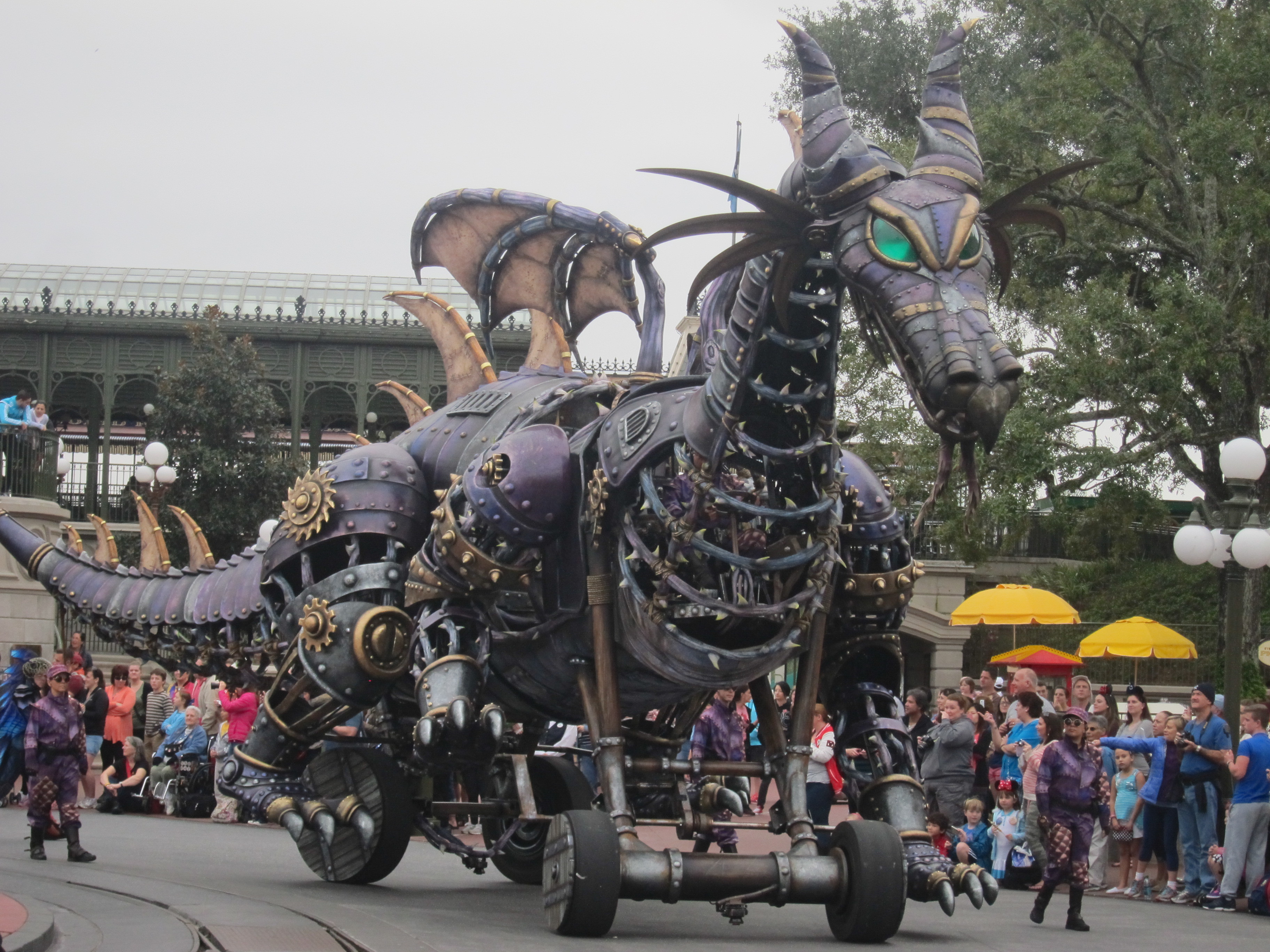 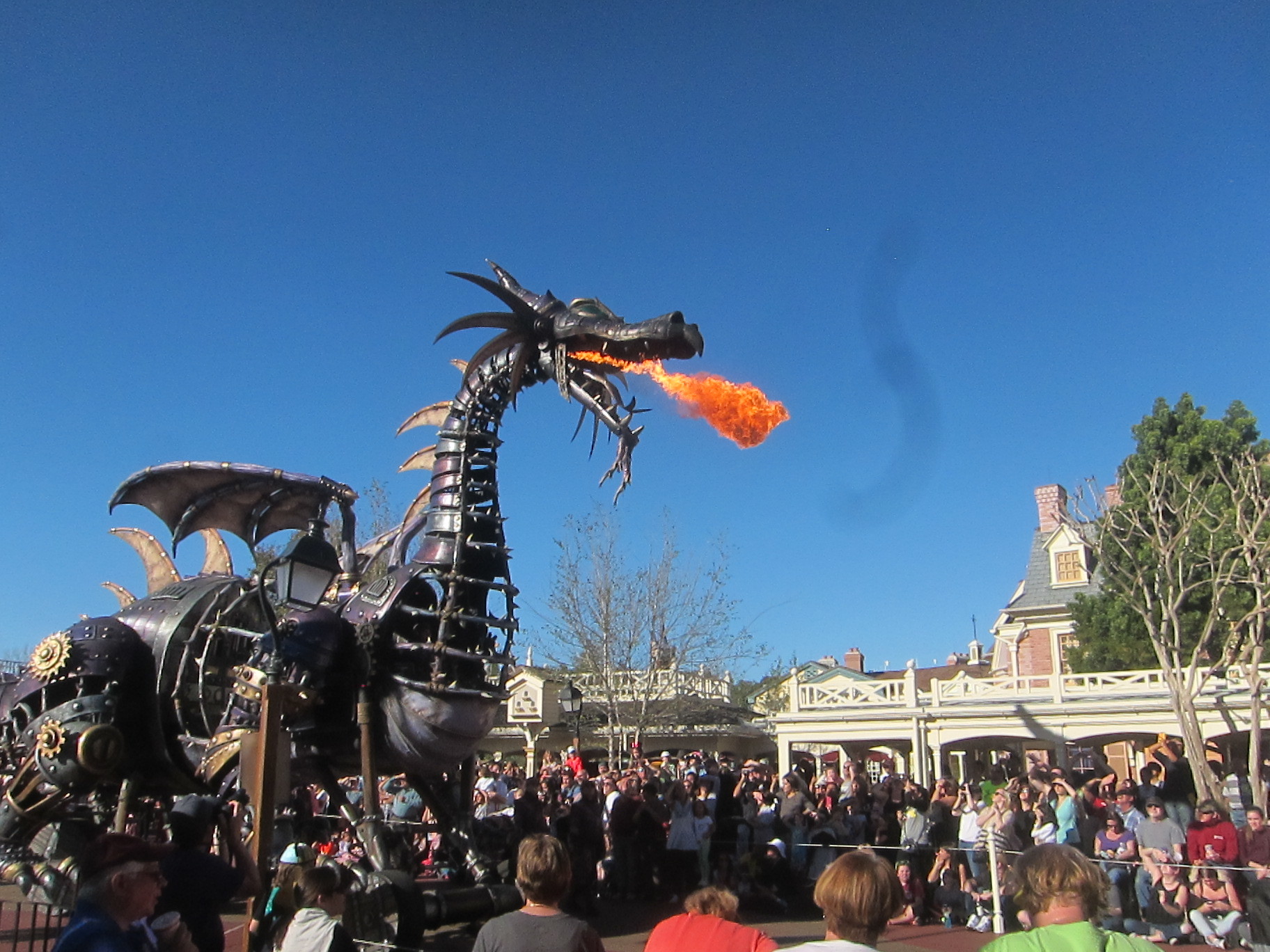 We love the CBR! 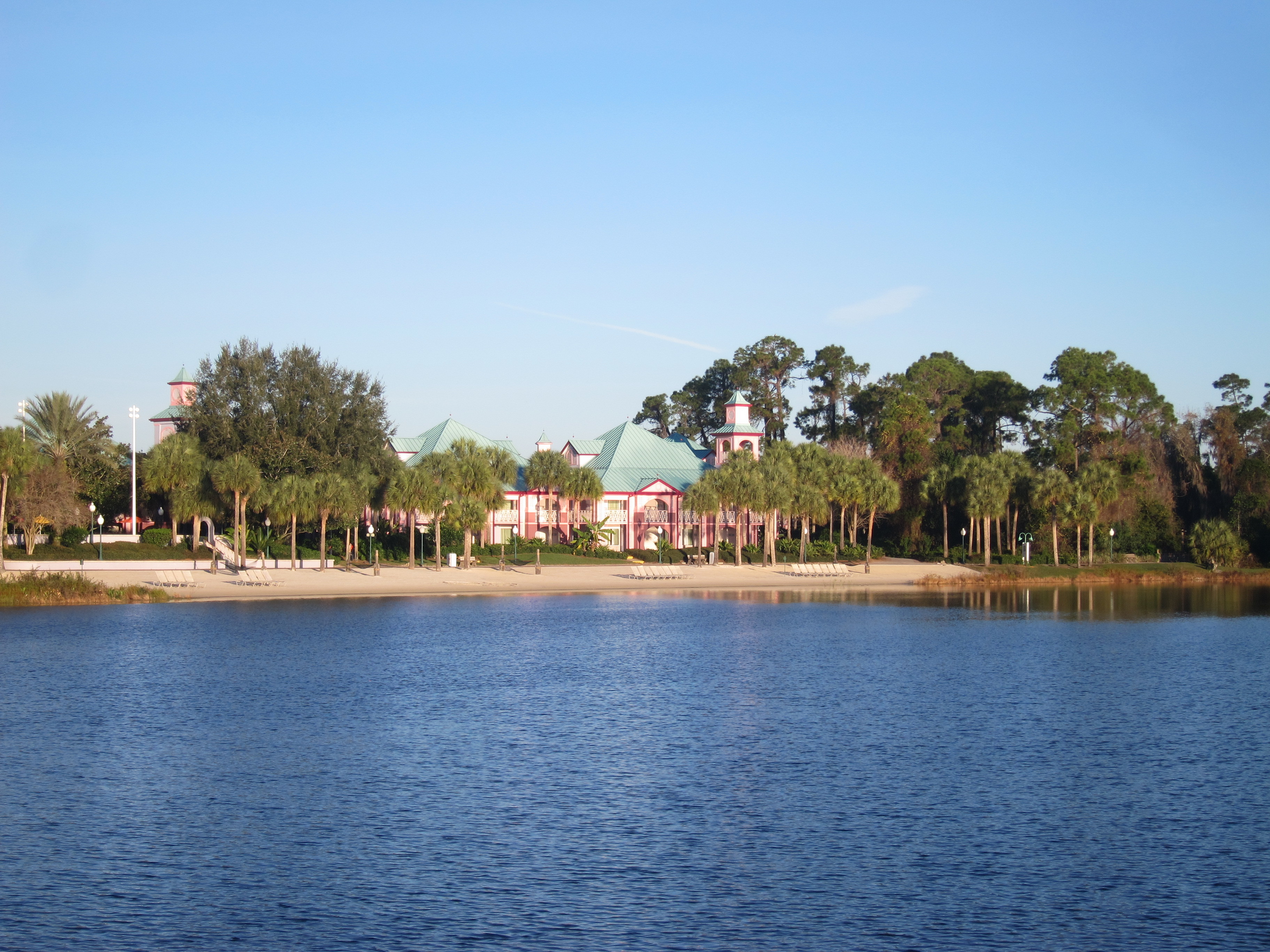 I was intrigued by the comment about your ride photos. We purchased the Memory Maker, particularly for the ride photos. From what I’ve read, in order to get the ride photos, you have to find your photo # on the screen after the ride and report it to a cast member who then scans your Magic Band. It doesn’t sound like you had to do this? Your ride photos were automatically included? Has anyone else had experience with incorporating ride photos on their Memory Makers? I’d be interested to hear your experiences.

By the way… Great report! As we’re approaching our 1st visit to WDW, I’m always interested to read about the experiences others have had. Thanks for sharing

It was changed in May or June of last year. You used to have to find yours and scan your band to have it attached. Since then they’ve added long range RFID scanners in the rides themselves. Now it’s automatically put into your MM bucket of photos. We were skeptical at first so we also scanned after the ride but then ended up with a bunch of doubles since it had done them automatically. This was also true for the video you get while riding 7DMT and ToT.

Really??? This is a great time saver - not having to wait for a cast member to scan our bands. Thanks for the update! I’m surprised this was not in the latest Unofficial Guide 2015 - Guess it was written before the change…
Thanks again!

Thanks for your trip report! I have never seen Merida’s Meet and greet area and will stop by next time! I love your photos too

Yes they write the guides at the beginning of each year. And also you don’t actually have to wait for a CM. Where the photo’s are displayed there is a little MB scanner under each one with the idea that you find yours and scan your band, but even though they still work now you don’t have to bother!

BearsMom2011 - they have changed it a little bit since we saw Rapunzel in the same area 4 years ago. It is just such a lovely space! 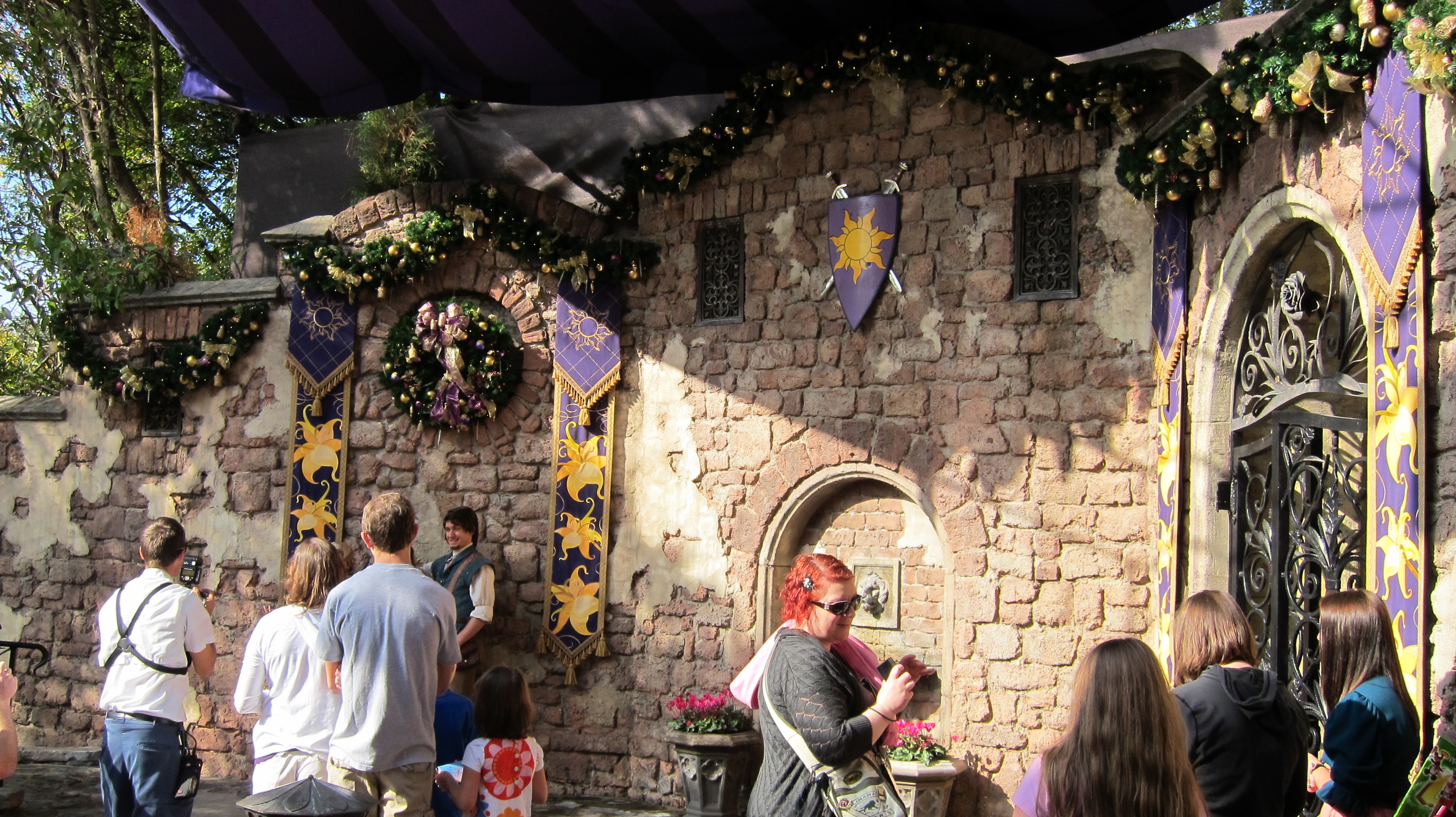 I wonder if this is where they had Belle tell a story in the late 90"s? It looks similar

It was changed in May or June of last year. You used to have to find yours and scan your band to have it attached. Since then they’ve added long range RFID scanners in the rides themselves. Now it’s automatically put into your MM bucket of photos.

And this is the beauty of MagicBands. While I think Disney has done a horrible job of rolling them out, advertising them, educating guest about their uses, I think that IF Disney IT ever gets its act together, MagicBands will be an awesome addition to the parks.

My favorite idea that I’ve heard is on its way: during planning you have your little princess or prince fill out a profile that includes favorite colors, names of pets, favorite sports, etc. When you go to a meet and greet, in a hidden teleprompter screen the character will be able to see the information and be able to carry on a “personal conversation” with your child. Think about the memory THAT will make!

I think it is…I bet I have a picture of that too! Off to look,well, trying to remember what year that was!

I found a shot from 2007 - no Belle, but it is the same area. I was so sure that Belle did her little show there then. Anyway, here it is sort of plain - 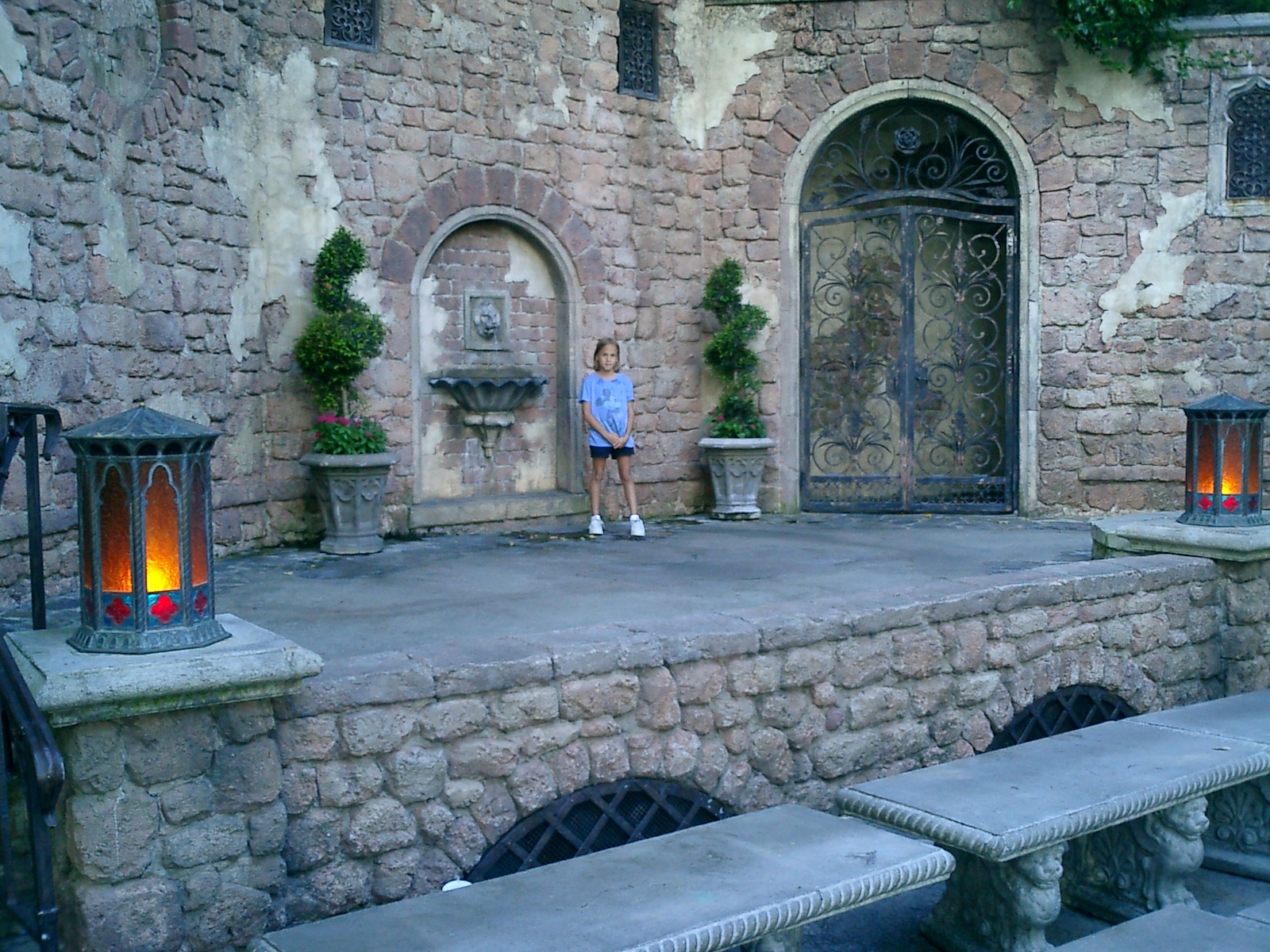 That’s definitely the spot. Everyone sat on the benches and she wore her blue dress. Afterwards the children could go up for a picture with her. I will look through my pics too

Thank you for sharing. I love the new parade too and we are also fans of Spectromagic. I miss it. Great pictures. I remember Merida’s spot more for Belle too. That was a cute show.