Some Disney is better than no Disney - Trip Report

Bags are packed, and its almost time to go!

Backstory and the crew:
I had originally planned this trip back in January as an epic solo trip for ~8 days over Labor Day kicking off with the UNC vs UCF game. Once the college football schedule was adjusted for the ACC and that game was officially removed, I shifted my dates. Also added a couple of friends who needed an escape as well. New dates are 9/16-9/21. The big solo trip can wait until park hopping, fast passes, night time shows, EMH, etc are back.

The group includes myself, my brother (DB), my sister in law (DSIL) and a friend of ours (DF). Most of us have been to Disney several times over the last two years in various different groups of people. So there isn’t a ton of pressure regarding the Disney magic…but I will admit that my DB and DSIL have high expectations of my planning abilities, especially with regards to 4+ FP, so we aren’t used to waiting in line much. We are all in our early thirties and are looking forward to an adult trip! One of our main goals will definitely be sampling the fine beverages across WDW.

The Plan:
Wednesday - We are departing tomorrow and are driving from Charleston, SC. DSIL and I are taking half days at work so will be leaving around noon, while DB and DF will be leaving after work and arriving later. It’s about a 6-6.5 hour drive, depending on who is doing the driving. Tomorrow night we are staying on points at a Marriott right next to Universal. DSIL and I should arrive in time to do dinner in Orlando and right now we are planning to head somewhere in Citywalk.

Thursday - US/IOA. We added on an extra day at the start of the trip to hit up Universal. My DB and I grew up in Florida, going every summer to the parks, but since then I haven’t returned. I have always focused on Disney, so somehow it has been almost 20 years since I have done Universal! Looking forward to seeing Jaws, Earthquake, Twister and all the other classics

We are HP and coaster fans, and with low crowds during the week are trying to see as much as we can at both parks in one day. Plus grab a beer or two (with and without butter). Once parks close, will be heading over and checking in to the Swan. Got a crazy good deal and I am very happy to be able to walk to two parks. Evening plans will depend on if the Lightning can win tonight and avoid a Game 6.

Friday - MK, including lunch at Skipper Canteen. We are rope drop to park close people, and dont usually take the time to do TS restaurants. Thought this would be a good time to try a few to enjoy a break in the AC. After park close, plan to do a mini-monorail crawl. Monorail will probably only be open for the first leg, but we will adapt as needed.

Saturday - Epcot! Focus for the day is World Showcase and F&W, so hoping the Saturday crowds aren’t too bad. We will be drinking around the world, and since we are dedicating the entire day to it to pace ourselves, plan to avoid being the sloppy folks by the end of the night…a 7pm close will assist with that as well.

Sunday - DB and DF are heading back to Charleston Sunday, but have an early tee time at one of the Disney courses first. DSIL and I will be heading to HS for the day and ending with an Oga’s reservation at 7:45 with a 7pm park close. Looking forward to that!

Monday - DSIL and I will wrap up the trip at AK. Have Yak and Yeti reservations for lunch and also plan to hang out a bit at the secret location. Whenever we are done, we will hit the road and drive back.

Doesn’t seem like crowds are going to be the complete non-factor we originally hoped for, but hope to still have successful days. Would rather be at Disney than most other places, so there’s always a silver lining. Normally I am on my phone the entire trip trying to get FP, so without that commitment hoping I can do some regular updates here throughout the day, although I wont commit to a truly live report.

Can’t wait to hear all about it and follow along! I am headed on an Adults Only WDW trip in June and am so excited for you!

Hope you have a great trip!

I have a kid-free trip the first weekend in Nov. Looking forward to your trip/bar crawl report!

I’m going with a friend in October and we’re hoping to do a monorail crawl or at least go to one bar/resort after MK, so I’m super interested to hear how that goes for you! Have fun!

I hadn’t found much information on anyone doing it recently, so I will be sure to take note of as much as I can and pass along.

have a great trip!

Countdown is finally at zero!

Car is packed and we are getting on the road. Will probably my be driving through rain most of the way, but should be to Orlando around dinner time.

Yay! Have a great trip!

Past Jacksonville so less than two hours left and finally got some clear weather.

My DSIL has what we call car-colepsy and basically falls asleep as soon as the car starts moving. So you can’t tell in the pic, but we are both excited! 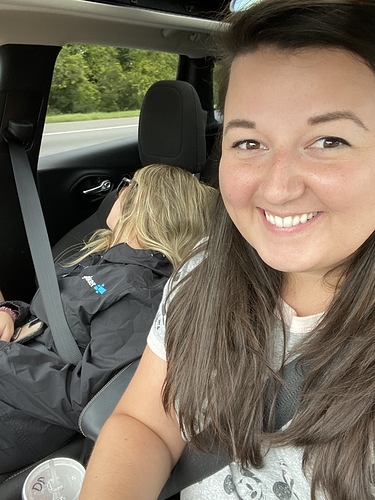 Hahaha! This is me on the way home for EVERY road trip we’ve taken. Even if I just woke up 2 hours before.

I’m going to have to steal car-colepsy! That’s too funny!

So funny— well you look excited!! Almost there! 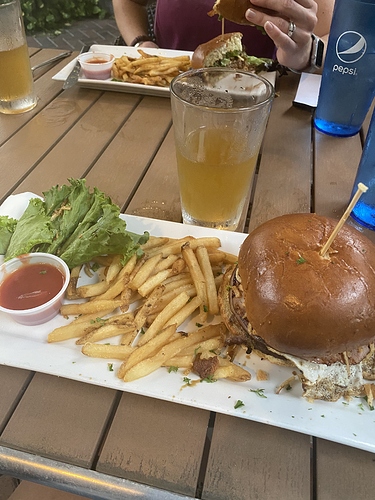 that burger looks yummy! So excited for the park days!

On the shuttle from the hotel! Hoping to get into City Walk and maybe grab a donut depending on the line before heading to US to start. Don’t have early admission but will see if they are letting regular people in a little before 9.

First line of the day 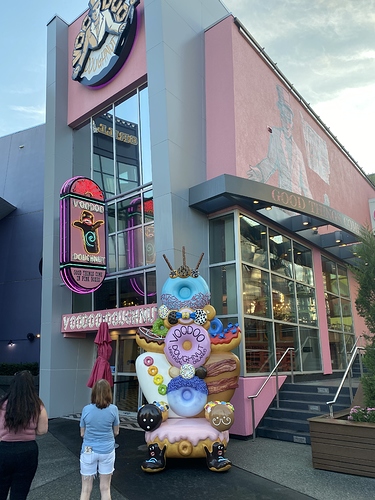 Scanned into Universal at 8:35, browser store til they opened the gates to everyone at 8:50. Heading to Rip Ride Rockit first.