Skyliner fail — what compensation would you ask for?

I’ve been obsessively reading about the Skyliner incident last night and I was wondering — if you were affected, what compensation would you (reasonably) ask from Disney.

On twitter people have joked (?) about free cruises and Club 33 memberships, which is clearly OTT. I’ve read Disney has offered four-day park hoppers and $200 gift cards, but this would not be a particularly attractive offer to me — UK visitors all have 14 day park hoppers anyway and gift cards restrict you to spending at WDW (you’ve already paid for your room and you may have the DDP, so it wouldn’t necessarily save you money in paying off room charges).

I think a free VIP tour for each gondola affected would be a reasonable ask. The marginal cost to Disney of this is low, but the value to the guests is very high. Feeling like a VIP for a day seems reasonable compensation for feeling scared / bored / uncomfortable for a few hours.

What would you ask for?

Maybe I’m just stupid, but as long as I wasn’t actually hurt I would just hope for compensation for whatever I missed that evening or what I was going to miss the next morning because we were going to lose sleep. Perhaps breakfast and some kind of FP access to make the next day more manageable with a late start.

I would be upset if we missed signing up kids for Jedi Training (obviously that’s hypothetical, my “boys” are adults now lol) or FPs for Slinky or dinner at a restaurant. And I would ask them if they could arrange them for us, depending what other things we had on and which were more important.

But I wouldn’t even expect free FPs if we weren’t likely to miss existing FP times. If they asked I might suggest a meal or a Minnie Van ride the next day. I’m not a fan of expecting compensation just because something happened.

As a UK visitor on, as you point out, a 14-day hopper to begin with, the most immediately useful/valuable thing to us would be dining plan credits - so if the gift cards cover those, job done. Perhaps a complimentary dinner at a decent location?

The tickets would possibly be useful if we were to do another visit in future, but it would be some time before we could use them - my last visit was in 2014, and we are likely to do any of the other parks around the world before coming back to WDW. In that respect a general purpose credit that could be used for, e.g. a cruise, Aulani, Tokyo Disney etc. with no date expiry would be useful, but perhaps too much. Only suggesting a small one as equivalent to the 4-day PH!

Kind of talking around the point here, because the main issue for me would be that we have 4 full days, 2 half days and 6 nights at WDW, which is just enough for 4 park days, 1 at TL and a quick mop-up, with the nights being again the 4 parks (MK having 2 for party/non-party) and the HDDR.

Spending an evening stuck in a gondola would immediately mean missing out on one of the evening experiences we’ve flown halfway round the world to see, and that’s not something Disney could fix (save for a complimentary HDDR we could combine with the MK evening to get some time back maybe). I feel for the people whose carefully-made plans this has disrupted - we don’t all have all the time in the world!

Absolutely agree on the FPP idea - a set for the headline rides would also be a useful one to claw some time back. Again, if this happened to disrupt a morning EEMH at HS that could ruin the whole day. We certainly won’t be riding the Skyliner for early park openings (not least because it doesn’t appear to run that early anyway - and maybe not at all now).

Turned into a novel this, sorry. Slightly cheesed off that we are booked into AoA/PC in nine days partly on the back of the Skyliner-HS-EPCOT link and it looks very much like that has gone out the window. So I suppose a price match for the ASM would be nice too! Pipe dream, I know.

Hope everyone going in the near future has their plans go smoothly, and hope anyone who got caught up in this has got through without too much disruption.

I would not expect anything, or ask for that matter. Typically, a extra fast pass may be given, but don’t count on it. I’m not sure why some think they would deserve something. Any number of issues could happen that make you late for or miss a reservation of some type.

The liner on chat reported $100 gift cards and PH tickets for each person. They did not ask for anything but Disney had the no expiration tickets printed and ready to go.

In the end, they got on the skyline at 8pm and got off and were debriefed by CMs. By the time it was over, there were no food options at the resorts? They reported that the announcements throughout the experience, or rather- the lack of any real info was frustrating and could be stressful on everyone. Imagine announcements saying there was a temporary stop as you watch emergency vehicles below? Hearing this, it reminded me of when Soarin had a hard stop during my last trip. You could see the CM (looked like someone in his early 20s), reading a script. He panicked voice actually seemed to alarm the children.

Yeah - I suspect they have a team of lawyers and script writers and insurance providers that have plans in place for most forseeable concerns. (Clearly they would not have had the alligator attack on the radar.) But I wouldn’t be too surprised to learn they had algorithms or such for a lot of issues.

Why would they not provide guests with accurate, up to date information? You do not need to provide all details but if they said: there was an incident in the loading/unloading area. It appears that no one was injured and all riders are safe. We are evaluating if the system can be started, or if emergency evacuations will begin . Emergency vehicles are here, not due to any danger, but to assist if needed…

Real, accurate, up to date info is the protocol most emergency responders use these days. Repeated announcements that there is a temporary delay helps no one.

I would only ask for compensation for something I missed and happily accept anything offered. Some will lawyer up and some will shrug it off. You can bet personal injury attorneys all have a raging boner this morning.

I wouldn’t ask for anything other than not being charged for what I missed (ressie) extra FPP would be nice. However, had I booked at one of the Skyliner resorts where the prices had increased because of it, I would be none too happy.

Perhaps I should have explained the background to my question because, frankly, your responses have astonished me.

From a PR perspective as well, frankly, as a decency perspective, Disney should pony up: generously and fast. People pay many thousands for Disney vacations, they should get what they paid for.

My suggestion of a VIP tour still strikes me as reasonable. It goes some way to compensate people for having had a horrid experience. And it actually costs Disney very little. And it makes them look good.

Because this image is going to stick in people’s minds: 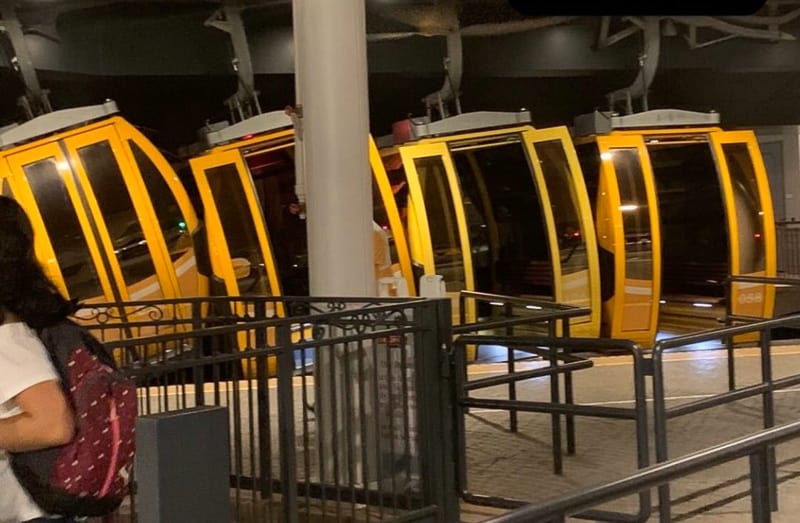 And it seems odd to me that so many of you are seeing this:

I will agree with @mousematt here. But, that’s because I would have been severely triggered by this incident and before anyone starts throwing the whole, “You took a risk” line at me, know that I won’t be shamed into changing my opinion.

Yes, certain things like elevators, airplanes, and gondolas are a possible trigger for me BUT I have a right to expect them to work properly and when they don’t, the responsible party needs to make it right.

No different than buying a car, parts messing up, the manufacturer doing a recall and solving the problem. I also took a risk buying the car but I am not being unreasonable believing the brakes will work and I’m not going to get in a wreck.

My compensation requested in this situation would depend on factors like (1) What did I miss while dangling in the air for 3 hours and (2) what did that wasted time cost me?

Actually, I can and often do. It’s how I judge the value of spending my money.

In its most simplistic terms, imagine I make minimum wage of $7.25 where I live.

If I were to buy a meal at a fast food place, I ask myself, “Was that worth an hour of my time to make the money it will take to buy that?”

Was just thinking of that film where they take that concept to its logical conclusion the other day!

In the case of a WDW trip, I’d probably be more minded to go for “what fraction of my trip has this messed up, and what is a proportional refund on my total cost”. Likely to be a higher figure for many I’d imagine as WDW is not cheap! For that reason I’d be more inclined to want something back than, e.g. if I got stuck on a tram going to work

Edit: aha, you posted again before I got there. Yes, exactly that!

Once I started placing a price tag on my time, I stopped wasting so much of it.

I used to coupon…it’s not as good as it used to be but that’s where I really got into this mindset.

It might take me an extra couple of hours to sort through them, organize them, and plan a proper shopping. But if I’ve saved a couple hundred dollars by doing that, I’ve paid myself that couple of hundred dollars.

I also would not make the decision on what compensation I was willing to receive immediately after exiting the sky ovens. I’d need a bit to decompress and think.