Serious help needed with my Hollywood Studios Touring Plan. Galactic Dessert and TSL throwing it off

We leave in 5 days and this is our first trip to HS. I am having a lot of trouble with my Hollywood Studios day touring plan. Everyone seems to refer to it as a half day park but there is no way we are getting it all in, in one day. We are going to go to MNSSHP the night before, so I am skeptical about making RD, but we plan to try. The Galactic Spectacular Dessert party and Toy Story Land seem to be throwing everything off. It spreads the Toy Story attractions throughout the day as opposed to putting them all first thing in the morning, and the predicted wait times it is suggesting are laughably short. There is no option for the Dessert Party at Launch Bay. I have basically cut everything star wars related from the plan in the hopes we can do it during dessert. I have also cut Rock N Roller Coaster but I would really like to try it out. I keep deleting stuff but it doesnt seem to help and the touring plan doesnt seem to be giving us enough time to get to shows or suggesting shows at convenient times. If I try and trick the plan, such as putting in a restaurant break for Launch Bay, and then just moving all the toy story attraction up to first thing in the day, and then evaluating, it messes up all the showtimes for the day. Lastly, we have two ADRs for this day which is more than we typically do. We will be on the Disney Dining plan and will have the points to burn at that point. I am not married to any of our ADRs but at this late date it might be hard to swap for something else. Please help me sort this plan out. I really appreciate you taking a look. Thanks

Did you notice that you have 128 minutes free after Muppet 3D? You’ve still got about 2 hours of “free time” listed, so you should be able to add some.

I had this problem at first and couldn’t figure out why either. The touring plan is just adding your free time at the bottom - so keep an eye on that free time total.

lol! Actually I didn’t notice that. Thanks for pointing that out. I will have to take a look at that later tonight. That still leaves me wondering about the arrival times and end times for shows and whether the touring plan is giving me enough time. Also, should I listen to the plan regarding TSL or just go ahead and do all of that first? Im getting the last minute jitters…

Switch 11 for 13 and that should free up time for RnR.

Yes but you have 2 hours between 10 and 11 now. This way you can do frozen and little mermaid before your ADR for 50’s PT by just switching 11 and 13.

Thats true and I was thinking of switching to Sci Fi anyway. i can throw both on the res finder and see what i can get.

Ok so I got dinner moved to 5:45 at 50’s prime time. I would prefer to swap to Sci Fi so I will keep a lookout for it. Anything later than 6:00 for dinner and I start to worry about being late to the dessert party.

Any other suggestions out there?

Not sure if that can help you in any way, but I read that the Alien saucers were the same as the Mater ride in California Adventure’s Cars Land. My family and I got kinda nauseous on this spinning ride so if you’re not a big fan of the spinning ride maybe you can skip it and at the same time maybe it will help with you plan.

I think the advice that HS is a half-day park was pre-TSL. The opening of TSL kind of upended all that!

You have me curious to the Star Wars Popcorn Cart. No idea what that is, but is it 60 minutes!

Anyhow, I think that free 128 minutes you can get a few things in, including RnRC and/or Star Tours at least.

The Star Wars Popcorn cart is my attempt to get my custom TouringPlan to cooperate with my tickets for “Star Wars: A Galactic Spectacular Dessert Party”. The party starts at 7:30 and runs until shortly before the fireworks start at 9:00 that night. There is no option for the dessert party in the touring plans so I told the touring plan I want to hang out at the popcorn cart during this time period. I am dropping most Star Wars stuff from my plan in the hopes that it will get done during the party. I am thinking of dropping March of The First Order at this point too. As much as dropping Star Wars disappoints me, I’m there for my kids and Im getting my way on a lot of other really great stuff and Star Wars stuff will be there next trip too. (I have a FPP for star tours first thing, so I am doing WAY more star wars than it sounds)

so I told the touring plan I want to hang out at the popcorn cart during this time period.

Ah! That’s hilarious! And here I thought I was missing out on something really special!

Must be SOME popcorn to be 60 minutes worth!

Not sure of ages of your kids, but Star Tours is definitely worth doing if you can. Star Wars purists (ahem, like myself) might take issue with the intermixing of generations of characters, but I think the younger ones like it. (My DS6 was the “Rebel Spy” on our flight, which he was shocked and excited about.)

Man I really hope my son gets to be the Rebel Spy !!!

Man I really hope my son gets to be the Rebel Spy !!!

In our sample of exactly ONE “trip”, I’m guessing they intentionally pick the youngest passenger as the rebel spy, since in our case, our son was clearly the youngest. But who knows. Maybe it is entirely random or something. The carefully placed “I AM the Rebel Spy” kids T-shirt they had in the shop as you exited the ride, however, makes me think otherwise.

In 2 previous trips combined (1 WDW and 1 DL) we did Star Tours at least 7-8 times I think and he was often the youngest and never got it. It seems to be most often kids but we’ve been on rides where it was adults. I tried to find the ‘‘spy cam’’ in the queue because I suspect knowing where it is and positionning your kid right might help but I still don’t know where it is…

Guess my son was just lucky, then! All I remember is that we were in the very back row, and he was seating somewhere toward the left side more than the right side. But who knows if the same seat position is used, or if it is, if it is different depending which shuttle you board.

Man! You haven’t heard about the Star Wars popcorn?!?!?!

Not sure of ages of your kids, but Star Tours is definitely worth doing if you can

It is our first fast pass of the day(i actually have 2 extra FPP for this attraction due to the MNSSHP system glitch I wrote about in another thread) but I am getting nervous about taking my kids, DD5 and DD3. I keep trying to get DD5 to start her Star Wars adventure with me, but when she sees Darth Vader at the very beginning of “New Hope” we have to cut it off. And everything with DD3 is monkey see monkey do so if DD5 is scared, so is DD3. But if DD5 can do it then DD3 thinks she can do it better. I am scared they won’t like Star Tours but their mother says to give it a shot…

On my son’s Star Tours debut (he was 4) he wasn’t scared at all but he thought the ride was very jerky and rough and that was his big problem with it.

Man! You haven’t heard about the Star Wars popcorn?!?!?!

Oh. I get it. It is a little known fact that the Death Star is actually ethanol fueled. They process tons of corn on the Death Star itself and use the refined ethanol to power the reactor.

When the reactor blew due to Luke’s skillful shot, all that corn blew as well, leaving enough popcorn to feed a small moon (or, wait…not a moon…a space station!): 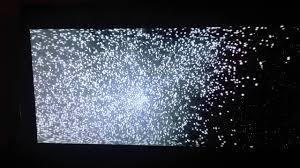 Okay. I can understand the hesitation at those ages. I’ll renege on my original suggestion in that case.