One again I use touring Plans room request service. This is like the sixth time I have put in this request. I have yet to come even close to obtaining what I asked for. This last request at Pop Century I made a general request for the 60’s building as it is close to the Skyway and QS dinning. On arrival, Once again I was about as far from my request as I could get. I went to check-in and asked about the request touring plans had submitted on my behalf. They said their computer showed no such request and asked who had submitted it. I told them and they stated they never heard of them or from them. The CM handed me a card for Pop Century and said in the future call them direct with my request as they make the room selections. Because we are seniors, we did want rooms way on the outskirts of everything though God knows, we did plenty of walking in the parks. Therefore, we were given the building I requested and an upgraded room to boot. As far as I am concerned the Touring Plan Room Request is worthless and I will be contacting Pop Century direct. Why am I telling about this? Because maybe Touring plans doesn’t know that their requests are not getting to where they need to go. At least the room finder part is good.

Touring Plans requests don’t go to the front desk, they go to the room assigners at the email address specifically provided by Disney for that purpose. It’s just a request, TP don’t claim you are guaranteed to get it. But many of us have had success - I’ve had the exact room twice, a couple of rooms down once, and an upgrade from standard to river view because, and I quote “you requested to be in the same building as your parents”, which was a TP request for 2 standard rooms. Of course, in July I got the very opposite of what I requested. Them’s the breaks.

In talking to the CM’s at Pop Century twice, I was told there was NO request shown on their system. They asked who sent them in and I said Touring Plans via Unoffical guide. They said they never heard of them or of their request system. Stated to call Pop Century direct with room request as they make the room assignments. Use it if you will but my requests have shown nill response.

That’s so weird because I got almost the exact room I requested on my most recent trip at the first resort and close to my request for the second resort.

That can’t be by chance. And I can’t imagine TP would keep sending requests that go nowhere.

True. I can only state what I was told on more than one occasion. Seems odd that these request to a email that WDW provided would not go to a central computer system and display at each resort.

Let me introduce you to the phenomenon known as “Disney IT” : if it makes sense, it’s not how they do it

Hoping that this is just a Pop problem, well not really but it does seem that Disney gets these requests. Apparently there is some sort of disconnect.

Did you actually configure your request and include the reservation number and main guest’s name? You do have to complete that info and not just select the room on the room finder.

Again, the emails don’t get sent to the front desk so CMs there wouldn’t necessarily know unless the room assigners noted the system. The CM at the front desk doesn’t assign your room.

That’s not how it works though.

The room assigning is done for all resorts by a central team. That’s where the emails go. Someone there will add the requests to each reservation.

Front desk CMs can of course tweak the room assignments, but that job hasn’t been done by individual resorts since 2019 iirc.

If the room request wasn’t on your reservation when the front desk CM checked, it means no one added it. The chances are it got missed.

You aren’t to the only person to say the same though. It could be not all room assigners bother adding the requests to the system.

Ok, I got my info from the check-in desk. This has happened more than once at different resorts. I do not know what email address Touring plan uses but I do know that on multiple occasions I was told there was no such record of any request. I followed recommendations out here and got away from a particular room request, the last one being so general as to be the whole building. You all keep saying that a central agency fields these requests, but I have repeatedly been told that the resort itself fields them. I guess at this point it is mute as I am only telling you all of my experiences with Room Reservation request. Some of you may be having good luck with this service and that is great. I have not so I will do it the alternative way. Nothing against Touring plans service other than it has not worked for me as I have always been assigned a room that is not even close to my request. Yes, I know how to make these requests. When questioned I have always been told to not even use their new service of on-line check-in but rather come to the front desk where they will do their best to get you what you want.

I’ve never gotten a room request anywhere close to what was requested at Pop. However, I have gotten good results at AKL and Poly. I imagine for Pop they might just not want to even mess with requests. I do not think that TP is just not sending in the requests!

Oh, I didn’t mean to imply they didn’t send them. I am sure they do. I don’t think Pop ignores them but rather just does not get them. Pop is not the only place that has told me they know nothing about the requests. Poly, POR, CBR are some that have said the same. Please don’t get me wrong. The service via Touring Plans is free and for me there are the benefit of looking at various rooms and their locations.

You all keep saying that a central agency fields these requests, but I have repeatedly been told that the resort itself fields them. I

When I booked my OKW package stay for this Christmas, WDTC added my request to the reservation and the wording is shown on my invoice.

If someone calls DVC Member Services, the CM will add it onto the reservation,

If someone contacts POP directly, a CM there can add it. Ditto central reservations, Guest Services or anyone else with access.

Touring Plans, as far as I understand it, use the email for the central room assigners, The CMs there will, or might, add the requests onto the reservation.

And if someone makes a selection through on-line check-in, that will add the request.

There’s only one field though. So the last one made, via whichever route, will be the one showing.

Once added, there is no way of knowing which route it took. And any one of those several route could be said to “field” the request. And there is no guarantee that a request will actually be added anyway.

Touring Plans, as far as I understand it, use the email for the central room assigners, T

I am confused by many facts here but I think the process years ago was that every resort had room assigners and requests went through the resort.

These days, the requests go to the central location directly to the people that assign the rooms. They shouldn’t need to add that request since they can either assign you that room, or another room (if the request cannot be met)?

The resort staff do not need to see the requests, or know anything about the request , since they don’t handle the request (and haven’t for years)?

I assumed the requests would still get added. So that when that room is assigned any request is already on the reservation.

But maybe they search the email inbox for the reservation # each time they get to assigning that room?

That could explain why people are sometimes told their request isn’t recorded. But others are told that it is there.

Either way, if a room assigner doesn’t read a TP request, or the room has already been assigned when the request comes in, the request has no chance of being met.

I think I will add my same request to the system through TP, as well as directly in Disney’s room info. If it is somehow missed or overlooked in one, it will still show in the other.

How are you planning on adding it directly?

You really can’t except by calling. The options on the check in page are extremely limited and you can’t name a specific room number.

I will add the info here… 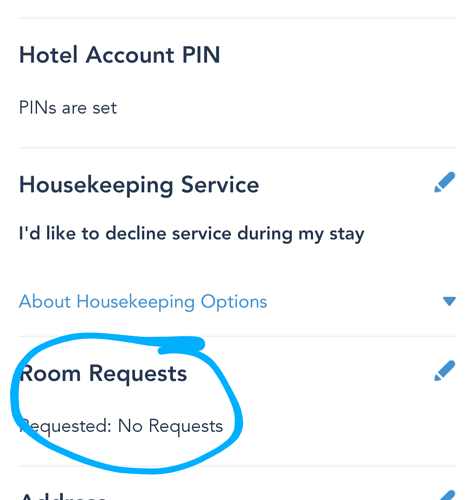 …and make it say the same thing as the room request through TP.