Those who read myposts on a regular basis know that I have an ear close to the ground and participate in forums (other than here), thathave a number of “well-placed” insiders who from time to time “leak” that they can get away with without revealing their identities to Disney. The ROL thread is one I have been following for well over a year, and with the various FB and Twitter posts that have been circulating, the thread has been a-buzz.

They have definitely been conducting "tests"or “rehearsals” on a regular basis; some during park hours, some after. Here is a picture from tonight (Sept 23rd) 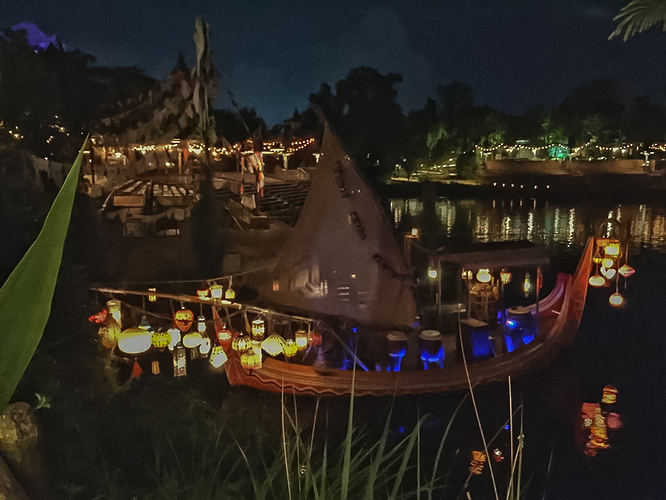 What follows has to be considered “rumor” because it is not an official release, but the source has an uncanny history of being “right” and is one of the most universally respected regular posters.

ROL will most likely have its grand opening in mid November. The fact that AK hours have been updated to the 15th, but not after, gives some credence that that may be the date. A few Press, CM, AP, and DVC previews may occur the week before, but at this time it looks like there will be no “soft openings” for general guests prior to the official opening.

There is NO “reliable” info regarding FPPs, dining packages, number of shows per night, AK hours, etc. The original plan for the Apr opening was 3 shows a night with dining packages at TH and Tiffins. The Asia side was to be for FPPs, the Dino side was to be for dining packages and standbys. It is pure conjecture if this is what they will actually go with when it opens, but it is the model they used for the JB show. As for capacity, without getting into specific numbers, 2 ROL shows will have more capacity than 1 F! show. 3 ROL shows will have approximately the same as 2 F! shows (this is actually fact, based on officially published numbers).

As I hear more that seems reliable, I will continue to update this thread.

The information I’ve been told was that it could open as early as October. Once they start doing CM previews, which is the first previews they’ll do, I’m sure the opening date would be immanent.
The hours at AK were updated well past Nov. 15th though.
Do you think they’ll have two shows a night even when the park closes at 7?

Once ROL opens, the hours will extend past 7:00.

I agree that the hours will extend past 7:00 but I would not be surprised if they only extend them a few weeks at a time. When they opened AK until 11:00 throughout the summer they had a lot of staff assigned in a low crowd park for most of the night. I suspect they want as many people as possible but need to see that people will learn to come to AK at night.

Thank you @bswan26 for the information!

Great post. It’s so funny, because I was just putting this all together in my head and was coming over here to create a post when I just saw yours. Your info validates what I think could be happening.

I’m visiting AK on Friday Nov 18, so this would be wonderful if the schedule works out. But, I’m worried about how to quickly secure a FFP or change my TH dining to one of their packages before everything gets snapped up. It’s a lot of time/energy to keep checking back on Lines/here all the time.

What strategies (besides checking all the time) do people have when a new show opens to be able to secure access to it?

Thank you for this information. Is there likely to be shows every night or just on select evenings?

My father asked me last night about RoL. He was saying something about reading about it in the 2017 edition of Birnhaum? He started talking about the Pandora attractions so I think he is confused. He is telling me I “have to help him get in”. I do not even know where to start. Anyone read this book and have any insight (I admit he bought it for me and I gave it away).

Do you think there be any decent viewing of ROL that isn’t in the stands? Are there other places you can go around the water to watch or from the outside seating at Flame tree Bbq?

Assuming they have everything ready to go (which it seems like that’s the case), I’d be really surprised to see them wait until November 15th to open the show. Disney is notorious for changing hours as they go so fingers crossed this is the same situation. I’d be really disappointed if they have this show ready before October and let it sit another month and a half.

When they first announced it they said that it was designed to be watched from the viewing area and although you may be able to see it somewhat from other spots it would not be ideal.

I doubt there will be many good viewing spots outside of the stands. You might see “something”, but it won’t really be “the show”.

Following. We are going Friday November 18th as well. Hoping that it is ready to go by then!!! Fingers crossed.

If Disney started off with previews of the show, how does that work? Would you have to be invited, FF, or wait in line? Or just pure luck?

“Previews” are for a specific targeted group such as CMs, AP holders, DVC members, etc. These may or may not be hard-ticketed, and may or may not be free, depending on what’s included. “Soft Openings” are when they hold a showing before the announced official opening date. These are usually NOT announced and benefit those who happen to be lucky enough to be there when it happens.

Thanks for the insight.

Any word on how the rehearsals are going? When do they practice? After the park closes?

Mostly after park closing, however there have been some recent pictures of the floats being out during park hours.

Just checking back in to say that there are no updates; Nov 15th time frame seems to be the consensus of when it’s going to open; no intel on previews or soft openings.

There have been a lot of questions about show times. NO ONE knows for sure. Here are my guesses based on a few “facts”.

In December, official sunset is approximately 5:30. It has to be “full dark” to run the show, so 6:30 is probably the earliest they could run it - but I doubt they would have it before 7:00 (it would kill dinner hour at Tiffins). The show is supposed to run 20-25 min, and I can’t imagine they could unload and reload the seating in less than 30 min. So I can’t imagine that shows would be no closer than an hour apart.

Putting this together, I would guess that 7:00, 8:00, and 9:00 would be the earliest/most compressed schedule. If I was wagering I’d say they would go with 7:30 and 9:00 (with a possible 10:00 or 10:30 show added during high-crowd times. Keep in mind that these are personal guesses based on “how Disney does things” and not based on any “insider info”.

Thanks for the guesstimates on time, I have been trying to figure that out with my TH lunch or dinner decisions,.