Renting DVC at deluxe resort.. is it really a deal?

I was hoping to get a decent rate for the Poly in May 2023 via DVC rental points but the quote was $743/night based on point rates. The rental company (DVC Rental Store) said it’ll be a $2 per point cheaper once it’s 7 months out, but otherwise won’t fluctuate.

This is a lot higher than what I expected based on my research and probably not great savings compared to Disney’s rack rates.
What’s the deal? Was I too optimistic on savings? Is renting via DVC more expensive now due to demand? Is it because it’s the Poly?

I expected between 25-50% lower rates than Disney direct but maybe I need to recalibrate expectations.

I saw a better price for deluxe on the WDW site… check there.

I know these are not your dates, it won’t let me go out that far, this is for august 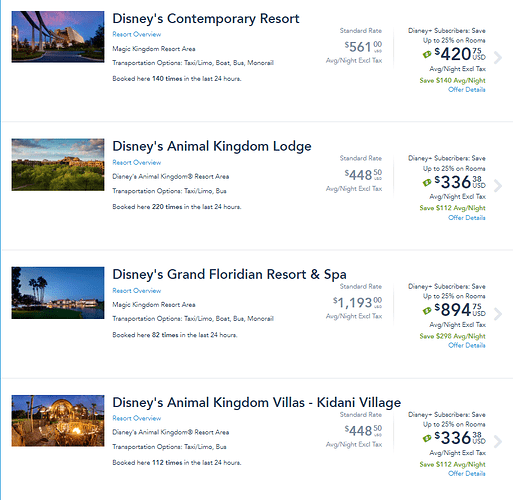 How much are they charging per point now?? Poly in May is what, 24 points per night? That’s $30 per point??

Rental agencies have definitely raised the price per point in recent years which has dramatically lowered the value proposition. Especially if Disney is going to be generous with the 25-30% off discounts we’re seeing now. Poly is also just pretty high in points per night vs other studios.

David’s is listing $23pp for premium resorts at 11 months. I can’t see a price on DVC rental store but I find it hard to believe they are that far off. That would make Poly $528ish per night. Not low (and I am not sure you can compare August deals to May) but nowhere near $700!

Maybe it’s including some additional ‘cancel for any reason’ fee or something too. I agree $700 seems crazy high, especially for May, but also I just don’t think renting points is as much of a deficit in price as it used to be.

I just don’t think renting points is as much of a deficit in price as it used to be.

I fully agree with this! I think the demand has definitely driven up the cost.

And everyone getting screwed bc of covid.

DVC Rental Store now has a pretty favorable cancelation policy for all bookings so perhaps they’ve raised prices for that.

Sounds like I should investigate David’s, or The Mouse himself!

DVC Rental includes insurance in the price. David’s price does not include any insurance.

I am staying two nights at Poly in July because friends are staying there and we want to be at the same resort (staying at Pop the first two nights).

The rate for either hotel or villa through Disney is the same - $613 per night, $689 with tax. A dedicated rental for those nights is exactly the same price and in some cases - $10 to $20 more. I don’t understand how that is working out for anyone.

Poly was not a part of the summer discount. It is really the hot resort.

I am staying at Poly next week, DVC. Rented through David’s. Paid $2240 for 6 nights (119 points) standard room. I think it’s a great deal. I looked for my same dates next year and price went up just a little bit. It must depend on the time of year and how many points are needed.

It really depends on who you are renting from. I have a friend of 40 years who gives me a very good rate. I have 9 nights at OKW for $1300.

I am staying at Poly next week, DVC. Rented through David’s.

The ones I am quoting are the prebooked rental rates. By the time I knew I was going, Poly was on waitlist for my date so I couldn’t do a typical rental route, which would have been a savings.

The prebooked seems to have increased in popularity but the prices just don’t make sense to me.

It really depends on who you are renting from

Great you have a connection. If I were staying on my points it would cost me $460 for two nights! If I were renting to a friend they would get a heck of a deal.

This is why I’m staying away from DVC for our Jan 2023 trip. I’ve never rented points or stayed at DVC so I tried to do a little research/ checking websites etc. but for what we would need it never seemed like a deal. It got confusing fast. Lol.

Plus while a fridge and microwave would be nice - we don’t need a full kitchenette and losing housekeeping just doesn’t feel like a good trade off for us.

If you are willing to rent DVC at the less popular resorts (SSR, OKW, AKL-K, CC), you can indeed get a deal. My week was 52% off rack rate including travel insurance for AKL-K and I could book far ahead without having to chance a Disney discount for my dates.

I have gotten great deals renting in the past, and even with the increased price per point at David’s, it would still be cheaper than rack in most cases. However, you should always check your specific resort and dates, because if there is a promotion on, direct from Disney could be the same or cheaper.

Also as has been noted, there are certain benefits of a regular room over DVC, like housekeeping, that might vary in importance from person to person. Hard to price that in.

I understand now. I have noticed the same thing. Many of those reservations for any resort are super high.

But free parking goes in the benefit column!