Remember when you could

This photo came across in my FB feed this morning. 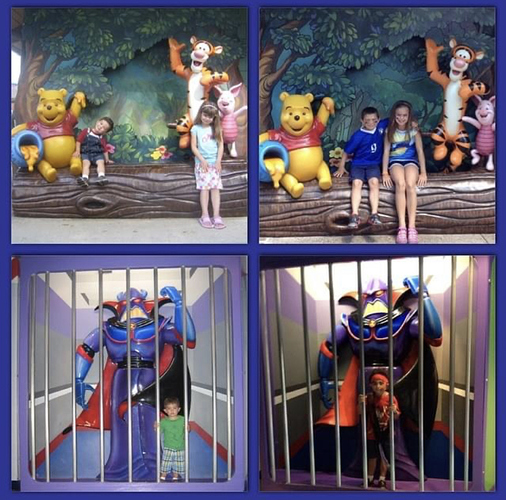 Remember when you could get in the cage with Zurg and take your picture?

What things do you remember that you used to be able to do at WDW but which you can’t anymore?

I remember when we could get a picnic lunch from Aunt Polly’s on T.S Island. It was cold fried chicken, biscuits.

I remember when you could ride Horizons…

Oh, so many things!!

Looking forward to reading about things that are still there but changed somehow.

And I don’t think I knew that you couldn’t go into Zurgs cell anymore. Is that a Covid thing?

I remember making three visits to the Crossroads on Streets of America to meet the Power Rangers with DS, who was about 6 or 7.

The trails at AK to meet Pooh and friends, although it was annoying to have to do all of them separately!

Watching Mulch, Sweat & Shears roll up in SOA and dancing along.

Seeing the Golden Girls’ house on the original Backstage Tour.

Watching DH be the Captain on the Battle Ship scene on the Backstage Tour one trip and then 18 months later doing the same role. And DS being the guy in the cabin who gets drenched. Funny story, I was jumping up and down on the ramp at the entrance as soon as the CMs appeared at the top, before they’d announced anything. I was trying so hard to get their attention - and it worked. He then asked DS if he would like to do it and he was kinda “OK, I guess”. He was taller than me and I decided I better tell them he was only 14. They were surprised but just got me to sign his waiver form.

Riding the Sky Way in MK.

Not riding the subs because the line was too long…. and never getting another chance.

What about the train around MK. Can this be part of lost memories since it’s been out of commission so long now

Not riding the subs because the line was too long…. and never getting another chance.

And I don’t think I knew that you couldn’t go into Zurgs cell anymore.

It’s been that way for at least a few years. I can’t remember when we first discovered it but we were so sad. The entrance on the side of the cell (to the left of the picture) is sealed up. We had planned to do this annually!

Now you have the new and improved SkyLINER. Better because it goes more places and is named after the best community on the internet

What things do you remember that you used to be able to do at WDW but which you can’t anymore?

I’m not sure how I didn’t anticipate this.

I remember going to EPCOT in the mid 80s and seeing the kiosks with the (gasp!) touch screens where you would make your dinner reservation for that night. My dad was all

That’s a good one that points to another good one – remember when you could decide THAT DAY where you wanted to eat and make a reservation upon arrival to the park?

I can never come up with replies like this. As always, Matt does it again.

We booked Le Cellier on the first day we went to Epcot, having arrived at about 11am.

Yes! That’s exactly what was running through my mind as I typed that out…

Remember when it was ok to like Captain EO??