Reality Check and the Five Stages of Grief

It’s over. It’s all over and it will never be the same again.

“We’ve rebooked our trip for late April and we’re crossing our fingers!” Give it up. It’s not happening. You’re not going. You’re in Stage 1 of Grief — Denial.

Look around you at what’s happening. For the first time in its nearly fifty year history, Disney World is shutting down all on-site customer operations for two weeks. The USA has banned all non-citizens from entering the country from the entire continent of Europe. That’s three quarters of a billion people. (For two weeks? Nah. It’ll be longer.) Virgin Atlantic has told its staff to take eight weeks unpaid leave. It’s cancelling 85% of its flights in April. It’s cancelling some routes — including to the US — completely. 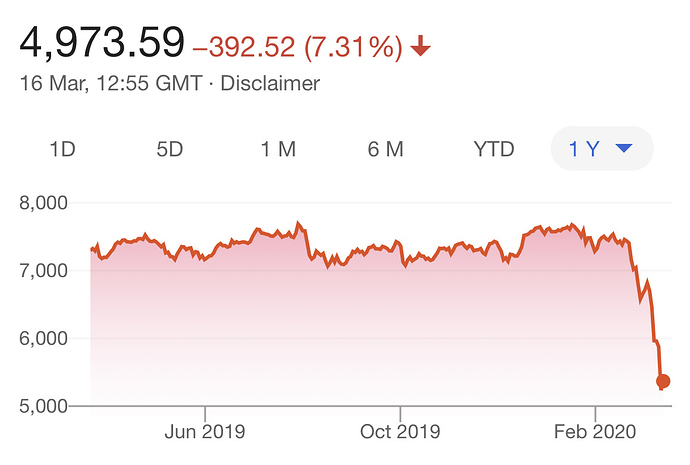 It’s dropped by a third in under two months.

The Dow Jones shut down almost as soon as it opened this morning. Stocks are in freefall.

This is all virtually unprecedented. We’re in wartime conditions.

A lot of people are going to lose their jobs and livelihoods. If I were Len Testa, I’d be worried for my own, quick frankly, because I don’t know if this site will continue to have a purpose.

I watched a live feed of HEA last night. And I seriously thought to myself, I wonder if I’ll ever see that live again.

Let’s flash forward to the future, shall we. Look! Here is Main Street, with the Castle at the end —

And here is the Skyliner, transportation of the future! 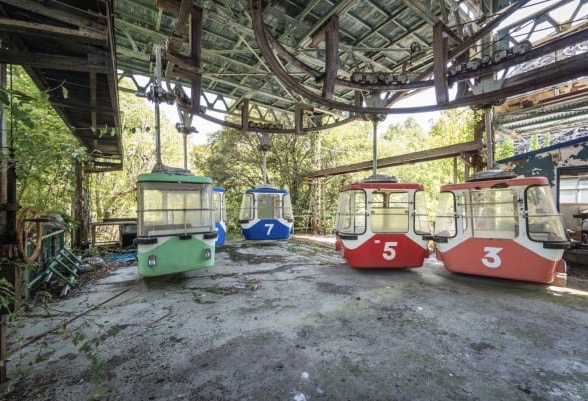 If you think your April trip is going ahead — think again. Or your May trip. Or your June trip . . .

We are slowly waking up to the New Normal. It’s going to be rough for a while and we’ll eventually find a new equilibrium. But the days of FPPs and ADRs may be behind us forever.

If you think I am wrong, try to work out what the path is from here to “back to normal”. I don’t see it.

I’ve done denial. I’ve done anger. I’m not sure what bargaining means in this context. Then depression, then acceptance.

WDW. It was good while it lasted.

It’s not going to be easy, but we’ll sort it. Brush up on WWII. Or the American Civil War. This will pass. The Phoenix will rise from the ashes.

You live in a country that was nearly decimated by war, and yet there you are, now, living in a thriving country. The world moves on. Trials happen. But this isn’t the apocalypse. Just a setback.

Brush up on WWII

Britain didn’t stop rationing until 1954, nine years after the end of the Second World War.

Britain didn’t make its final debt payment to the USA after the Second World War until 2006.

this isn’t the apocalypse

I didn’t say it was.

I said if you think you’re going to WDW in May, you’re deceiving yourself.

That ripped the US in half and its effects are still being felt.

If you think I am wrong, try to work out what the path is from here to “back to normal”. I don’t see it.

Things will get better but I do agree that all spring and at least early summer travel is off. I’m hoping it will get better around August, although I do realize we don’t exactly know what the trajectory of the virus will be. I have to go try to homeschool my 3 kids now…with my extremely introverted personality, this is going to suck. So far this morning I haven’t had the will yet to turn off binge watching of The Simpsons.

I didn’t say people would start eating their own pets. I said that things are going to change. In particular, we may never return to the jolly conversations we’ve all been having about our WDW trips. We certainly won’t be doing so in a couple of weeks after this has all blown over.

Too pessimistic for my taste. We are too strong for the view you present. But you certainly have a right to put your opinion forth.

We are part of the way back, and to be honest, if we all start thinking like your initial post, then you’re right I don’t see a way back. Luckily, Walt raised me better then that. I will always choose hope, optimism, and wishing on a star.

cjandres, you said it better than I could ever have said it. I am not in denial but I am very hopeful we will all find a way back.

In summary, we’re all going to need a Disney trip when this is over. Whenever that is.

But you also said it was over, it was all over and posted pseudo post-apocalyptic pictures.

Anyhow, I have backup plans for August, but we’re still holding out hope for May. Of course, I’m being a realist about it all. Disney might reopen before then. They might not. Just no way to predict. So, I now have a house rental scheduled for mid-August, but no point in cancelling May until the last minute.

Shanghai is planning a phased re-opening. And it is possible Disney might do something similar here…like, mandatory temperature checks before allowing people into the parks or restaurants, etc. We shall see.

They’re real pictures of real theme parks that have closed down and fallen into decay. It happens.

I wouldn’t describe them as post-apocalyptic, though.

We’ll see. In this case, the argument is win:win for me. If I’m wrong, no-one will care and we’ll all be back at WDW having a lovely time. If I’m right, I get to rub it all in your faces.

Shaking my head here. The dire straits state of mind of @mousematt is concerning, given his apparent age. Something else is clearly going on. How’s your dog?

Reality check: there’s no such thing as normal. There’s new normals. Sometimes. There’s only what we think we’re used to and that changes more than we’re aware of.

Regarding WDW, the iteration I was at in September 2019 (during a hurricane) bears little resemblance to the January 1974 or December 2001 iterations (to name just 2 personal trip dates).

You recall the Great Depression perhaps (I don’t - something actually before my time). FDR’s plan was to put money in circulation. I submit by having to stay home for a month or two I’m going to have a nice pile of money. Look out, WDW.

Are WDW hotels still open? Some folks are still working. Is the castle being painted? Maybe the monorail will operate better whenever the parks open again.

Quite possibly the stock market was too high anyway . . .

They are closing March 20.

ETA: It would actually be kind of cool/weird to see Disney during this time period. A ghost town, in a sense. When does that ever happen?

Whew! Back away from the keyboard. This is a very large disruptor for sure for many industries and potentially economies. Supply chains will be affected for sure. But this is absolutely not wartime. Death tolls will not be even close to the same of a global war. So folks out of the workforce will be out for a week or two, not permanently. This is a SARS virus that is super contagious with flu like symptoms mostly affecting the infirmed and elderly. Use prudence and err on the side of caution but don’t breed fear.

I work in the securities industry and this is not uncharted territory. We are seeing up to a 20% recession/correction currently and it could be as bad as 40%. It will get worse before it gets better. Support levels are currently around 2500 for the SPX and are being re-tested from Thursday’s lows in the US. I would suspect a lower support level than this in the upcoming weeks maybe 2000- 2250. SPX is down 4.2% over the last year so let’s not get too antsy here if you have been in the market. We have loads of prosperity post 2008/9. Let’s give ourselves some time to let the virus run its course. Most folks will be exposed to it and by far most people will have little to no issue at all. Markets will recover. It might take a year but that is ok as well.

So all will be fine. Global governments seem to be acting and reacting well to make this a softer blow and less of a disruptor for an extended period of time. Going to Disney World will be an option again but let’s think about family and friends first here.

I get @mousematt’s realism here. If I had a vacation planned for April or early May, I would not expect it to happen, and be pleasantly surprised if it does. I have a vacation end of May / beginning of June and while I’m hopeful it will be open by then, I’m preparing for the possibility it won’t be.

But I don’t think the closures will last much longer than that - maybe through June at the longest. Eventually, Disney and the rest of the world will have to come up with new protocols to operate with higher safety measures - no shows, lower capacity, fewer cast members, checking temperatures, etc. etc. They are not going to shut down permanently. And maybe after this pandemic is over (maybe 12-24 months?) I daresay things will be 100% back to normal, though we will all be a little older a little wiser for the experience.

The economy will take a hit in the short term, but if governments are able to respond appropriately and people are willing to get back out in the world, we will recover very quickly. People want to spend money. They want to get out of their houses. Maybe we’ve lost a quarter of productivity in some sectors, but it will come roaring back the next quarter.

As has been said above, all it takes is faith and trust … and something I forgot …

… and something I forgot …