The trip is me DH, DD 4, DS 9, and DMom for her 55th birthday. We are staying offsite at an Airbnb rental in Windsor hills. We rented a car through Turo. I would definitely recommend Turo it was cheaper than a car rental and so far has been great.

Traveled out of clt to mco 9:05am departure. Clt airport was not crowded when we got there at around 7:15 ish. It did get really crowded around the time we were about to board(8:30) but people were social distanced and pretty much everyone I saw was wearing their mask properly. MCO was a completely different story it was crowded and social distancing measure really didn’t seem to be in place anywhere that I saw. 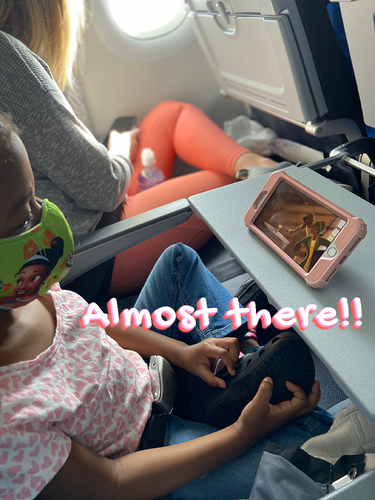 B2C50B90-0E3F-41E4-B9D5-D2D6DCEC7A11.jpeg960×1280 1.01 MB
Disney springs for valentines date night. My mom is watching the kids (yay us). This is really the first time I’m eating at a restaurant during Covid Disney springs was crowded but basically what I expected. We ate at the boathouse I had a duck duck rax and my husband had the Christmas old fashion. His drink was too strong for me but I loved mine (which was also strong) I had the shrimp boil and my husband had the lump crab cake both were delicious. We also had oysters which were very good. My only complaint here is that I do not think tables were spaced 6 feet apart and every table was full. This is our only non park restaurant so I’m hoping for better COVID regulations. 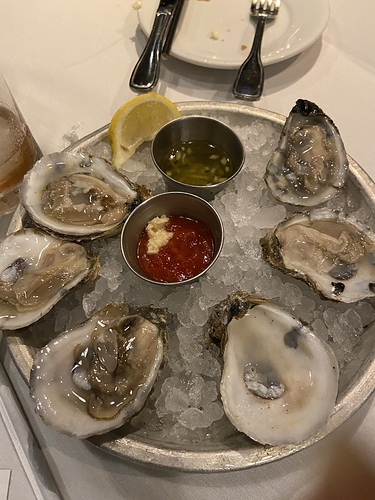 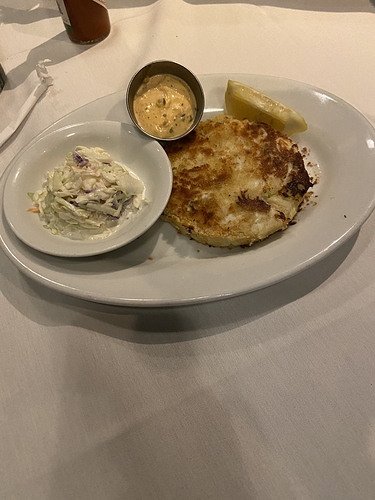 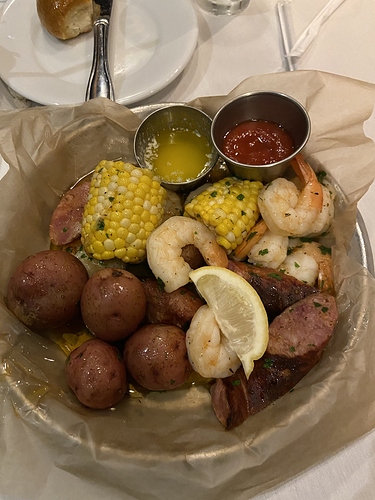 Reservation at topolino’s but I changed and canceled once on property. We ate at the QS instead. I’m not a huge breakfast eater but my husband and kids enjoyed their food. We rode the skyliner arrived alittle after 10:00 had to wait maybe 2 minutes before they begin letting people in we were in the park by about 10:20 and headed to Norway for frozen ever after. We kind of took our time walking there just checking out the scenery as the booths weren’t open yet. We got there around 10:35 ish (we walked the path going towards France which may have be the longer way but definitely less crowded). We were off the ride before official park opening at 11. Heading to Mexico we saw Elsa so of course had to stop and get a picture. Next up was the 3 caballeros which was a walk on. 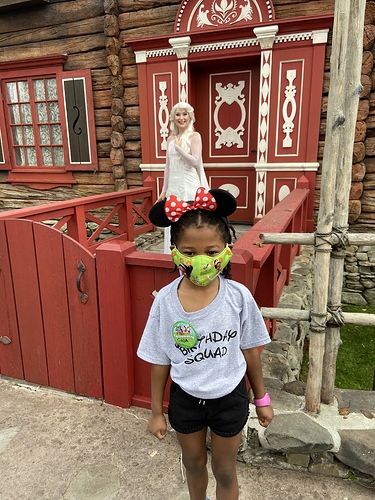 Went to America and checked out the souls exhibit. We then did the drawing with an imagineer. My husband did amazing at this, I was mad lol.

We also got beer from Germany, I don’t drink beer or eat grapefruit but my husband got a beer that I would definitely drink again.

My mom and the kids did the spin art at one of the booths and it was so cool. If you have multiple kids in your party this is an activity that easily gets everyone involved. I would recommend it, my son is peddling the bike. 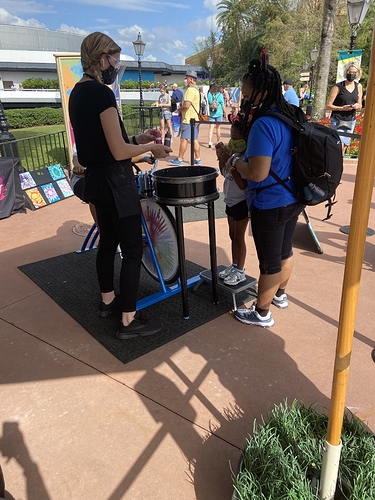 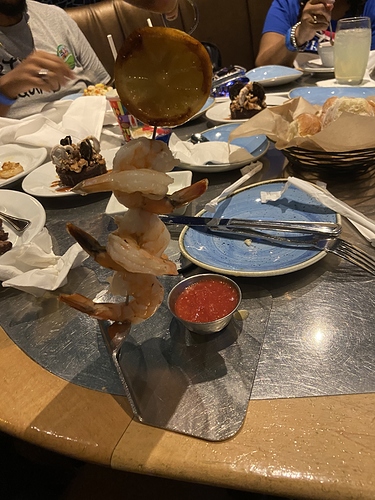 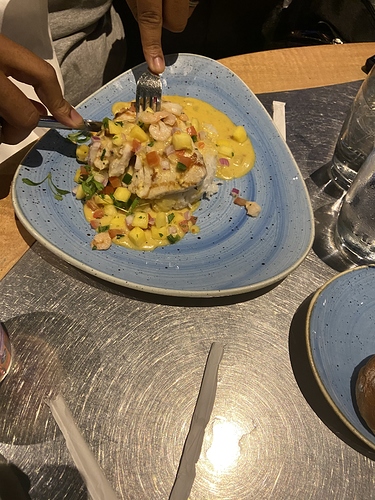 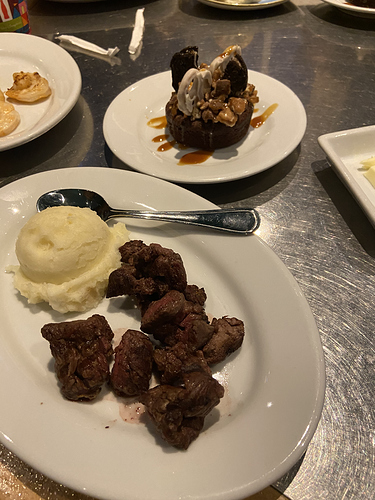 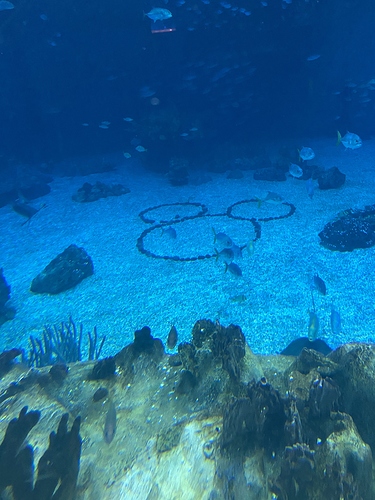 We also did the Painted by numbers thing and I’m
So glad we did. It was a simple thing but another festival only activity that I think kids will enjoy.

We decided to end our ride day with soarin and my mom and daughter went in living with the lands (it was a must for her). I have never road soarin and honestly it is amazing, and it will definitely be top of the list for the future. We are going to walk through the worlds again before heading to the skyliner. This was not everything I wanted to do but we got to do pretty much all of our must dos.

We saw 2 calvacades with Pluto, Mickey and goofy, the second one added Minnie. We also saw Winnie the Pooh playing in the field.

I would certainly come back to Epcot to do everything but it’s not a park I would be mad at if I missed. Today is a rest day but we have a reservation for Sanaa so I’ll probably post about that and then tomorrow is MK

We did Nemo and friends and the aquarium we spent more time here than I anticipated but was definitely worth it.

That’s always the way it is with us, too. I never seem to set aside enough time for the aquarium.
Sounds like you had a pretty great first day!

Food looks really good. Good to hear about Coral Reef, looks like a fun place to go for kids.

I could spend an hour at least just with the manatees!

We were not expecting manatees we were blown away. I didn’t realize they were that big!!

We rented a car through Turo. I would definitely recommend Turo

It’s basically Airbnb for cars. The guy brought the car to us at the airport and he will pick up when we fly out.

I’ll have to check that out. I’m curious about insurance implications.

We bought additional insurance which normally wouldn’t do but did with Turo because I wasn’t sure my regular car insurance or credit card insurance would cover it. Even with the added insurance it was cheaper than traditional options. Think it was about $35 a day. I will say the car we decided to rent does have a 1,000 mile limit but that was perfect for us. And there are cars that don’t have those limits

I just did a search for my dates, and perhaps it changes as you get more in range. But the inventory available to me for my dates was … not good. Old models, rough looking, mostly sedans, and not much of a savings per day as compared with a large, well known rental service. I can see how it would serve a certain purpose but it won’t work for us. Glad it works for you though!!!

Interested in Windsor Hills. I know they are all separately owned, but could you provide your thoughts on location, drive time, facilities etc that would be great. Looks like a wonderful trip!

Believe the hype, the bread service at Sanaa was delicious.I probably could have just had that 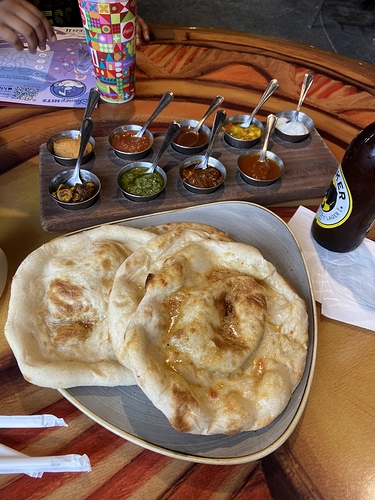 I can’t remember the name of the entree we had but I had the beef version and my husband had the seafood. It was pretty good. My husband also had the Tusker beer which he really liked 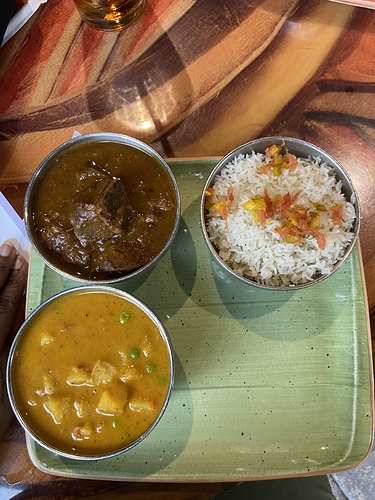 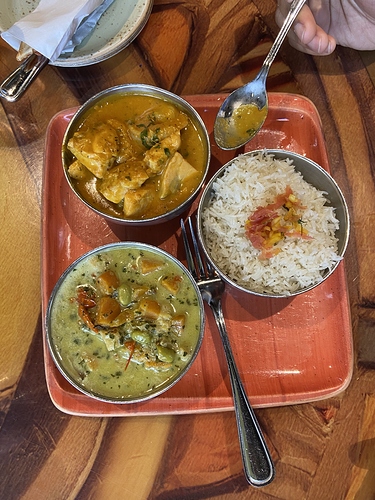 The kids food was pretty standard cheeseburger and pizza so I didn’t take a picture but their dessert was so cute. Neither of them liked it though. 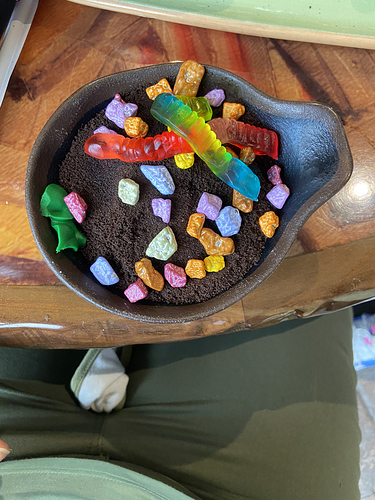 The thing that we really came here for (besides bread service), the view. We had perfect seats and it did not disappoint. 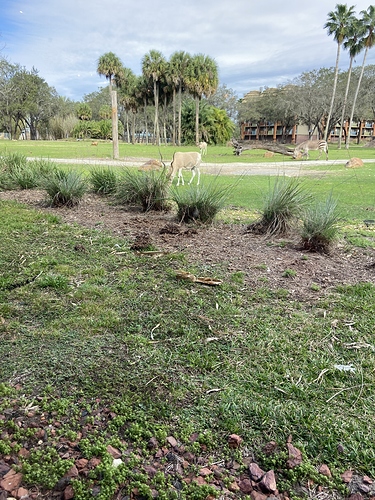 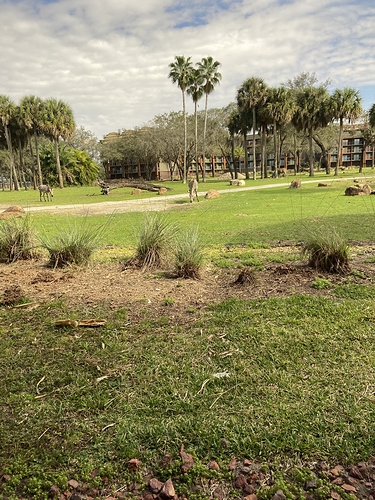 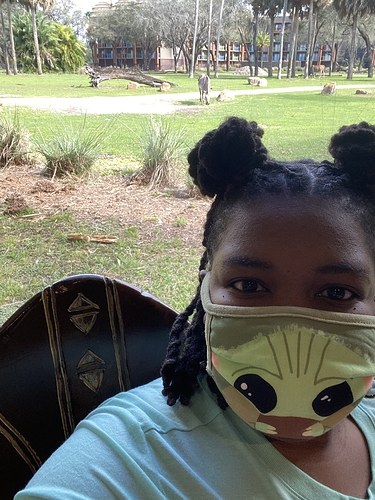 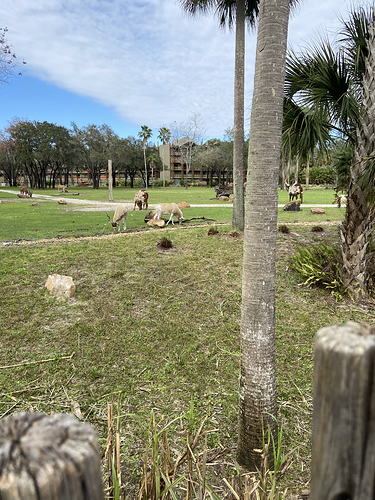 We went out to the outlook afterwards and we’re able to get even better looks at the animals.I give this restaurant a thumbs up.

I’ve been to Sanaa twice and have yet to try any of the entrees. Just had the bread service and some other appetizers to share! It was so good. And I love the animals!

I always love it when someone else falls in love with the Sana’a bread service like I have.

The food there is so delicious! And your table was absolutely perfect!

What time was your reservation?? The perfect seat!

Back home I plan to updated soon!

What a great birthday day for your DD. Fun trip!

It was actually my moms birthday.

We ate breakfast at contempo cafe and took the monorail over to MK. We took a bit longer at breakfast than I had hoped for so we didn’t get into the park that much before open. 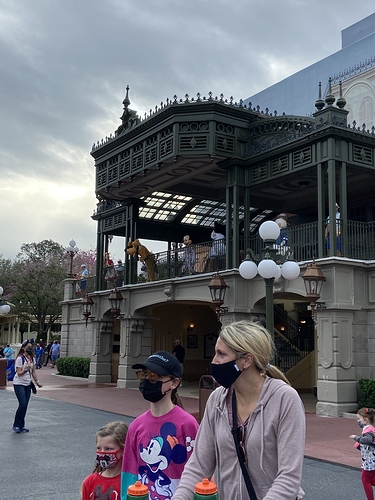 Next we did Splash mountain we got in line at 9:35 in line, wait said 35 minutes, we were on by 9:54. It started raining while we were in line but I came prepared with umbrellas and ponchos. We got off of splash mountain before DM, and DD were done with the riverboat so we went over to the Christmas Shoppe. 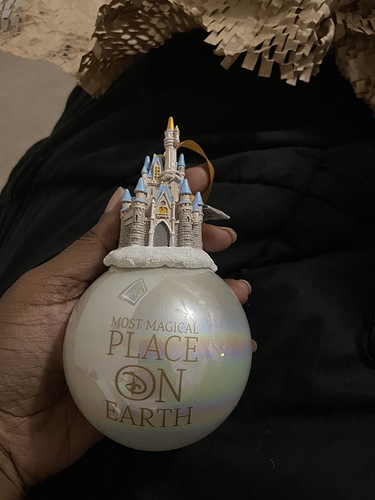 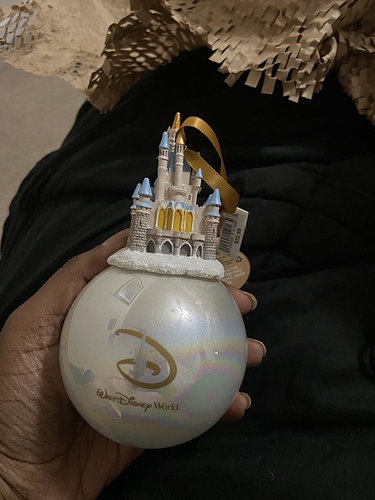 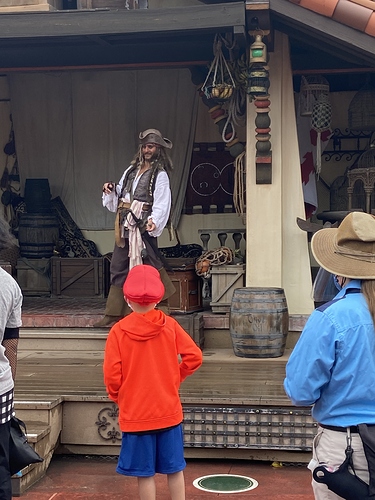 Although lines suggested against it we jumped in lines for Barnstormer at 2:46 The wait for barnstormer was insanely long considering the ride. I kinda wish we would have waited but it is one of the few rides I thought my daughter would enjoy, and she did.

In line for Winnie the Pooh at 3:35 and on at 3:53. The queue for Pooh is so cute and I hate that we didn’t get a chance to experience it precovid. I liked this ride way more than I thought I would.

Line for haunted mansion at 4:17 we saw Winnie the Pooh calvacade while walking.

My mom took my daughter on small world while we did this I hate they missed seeing the characters.

I forgot to keep track but we go on and off haunted mansion fairly quick. So another truth moment I wasn’t a fan of haunted mansion perhaps because I haven’t seen the movie but it’s not one i would put anywhere near my must do list. 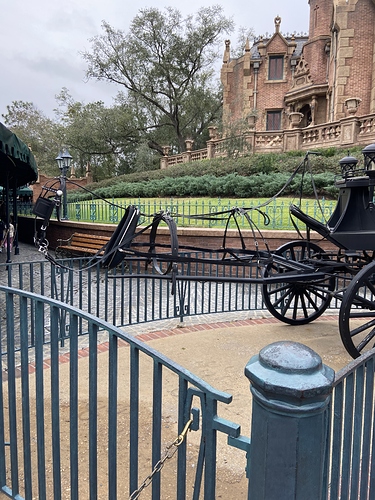 Next up is mickeys philharmagic in line at 5:28 forgot to time this one but afterwards we made it to space mountain at 6:18.

My mom took DD to jungle cruise and my husband got in line for seven dwarfs mine train. The plan is to join him after space mountain. We barely made it to seven dwarves mine train but the cast member was nice enough to let my husband step to the side. we bolted from Tomorrowland to fantasyland. (I bolted my son barely jogged). We got to see the electrical parade while waiting in line for the monorail.

I saw a lot of people saying crowds were terrible today but that wasn’t my experience. It was not empty like days of yesteryear but once in line social distancing was followed more than it wasn’t. Our goal today was to hit things we did not get to hit on our first trip and no we didn’t get to everything but we got all the important things and then some. It may be because I came with expectation it was going to crazy or maybe because I’m a Liner but either way today was a win for us. 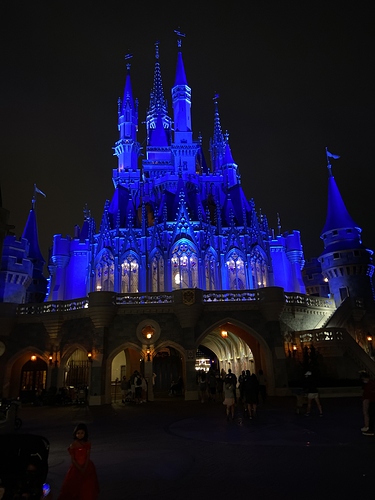