The info on Genie+/IAS is speculative for now. Please let me know if you see anything obviously wrong. 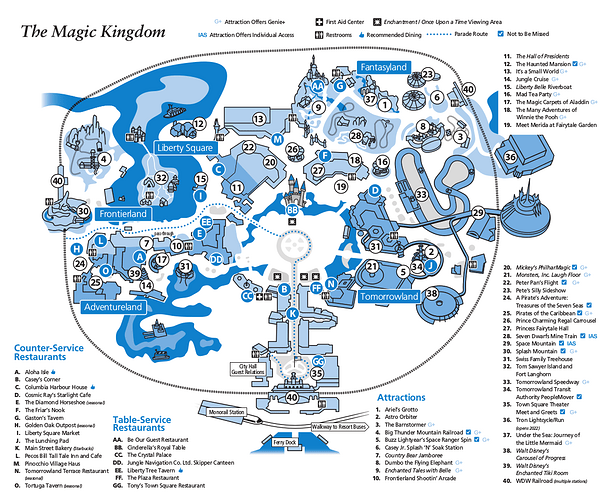 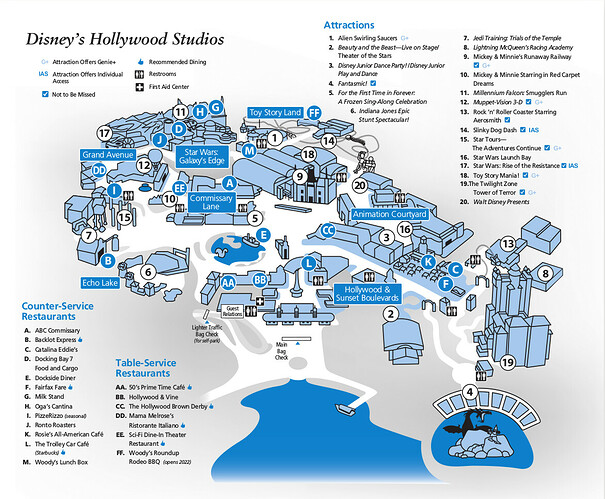 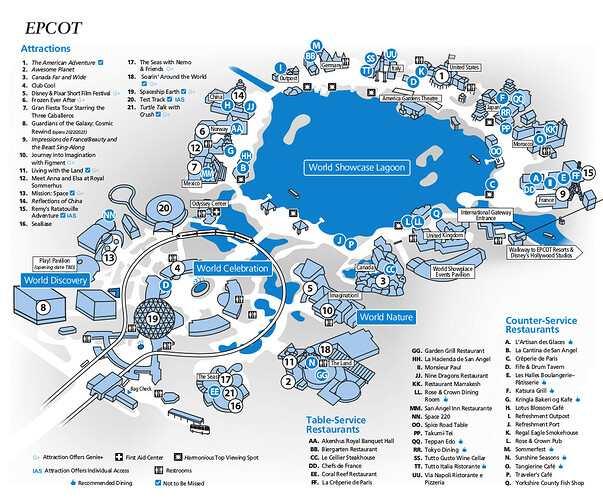 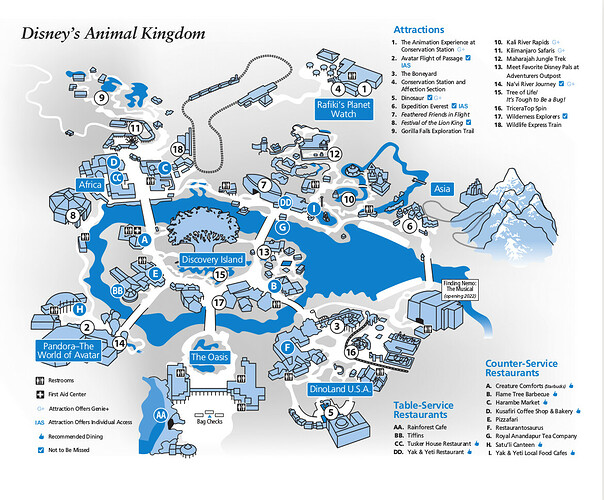 It’s there a reason why some of the attractions are italicized but some aren’t? I don’t see any mention of the distinction in the key.

In the Guide, the names of shows and live performances are usually italicized.

So far so good (though for some reason I stared at MK longer than necessary) - Formatting issue: the spacing on 19. at DHS is off.

I haven’t been since it opened, so I don’t know if it actually counts as an attraction…but are you leaving the Imagineering ‘Future of Epcot’ thing off on purpose?

Not sure if this is necessary to note on the maps?

In HS, will Smugglers Run be a G+ attraction?

Yes, sorry, ‘The EPCOT Experience’ is what I was going for there.

Also, just as a matter of preference…aligning on the period for the numbered items works fine. But for the lettered items, it looks messy, particularly for the doubled letters. IMO.

On each key it says ‘Not to Be Missed’.

That annoys the formatting area of my brain.

If it can be changed, make it either ‘Not To Be Missed’, or ‘Not to be missed’.

You’re the first one I thought of when I read this post. As in - this is a job for @ryan1.

According to most style guides, “Not to Be Missed” would be correct if it were a book title.

I don’t know what a style guide is, but that just seems like a random mixture of capitalisation.

It depends. The AP style would suggest you use upper case on the word “To”…presumably because the verb is actually “to be” and just not “be”. It isn’t being used as a preposition, but is part of the infinitive, and so should be capitalized.

Other style guides suggest otherwise, but my personal take, based on what I’m seeing here, is that the word “To” would be better capitalized. But, the Chicago Manual of Style explicitly states “to” should be lower case. I question the decision there, but perhaps it is to avoid making people have to figure out if the usage of “to” is a preposition or part of the infinitive? Generally, I prefer the AP style rules.

ETA: To make matters more confusing, the Chicago style guide is inconsistent. Again, “to be” is the verb, as would be “will be” (future tense). If you created a sentence such as “No One Will Be There”, the word “Will” is capitalized. Again, why I prefer the AP rules over the Chicago style.

What is IAS? That’s a new one for me…

I believe it is a fancy way of saying Single Rider Line?

No I don’t think so. It’s against rides that don’t have single rider, but are rumoured to be the paid access ones - 2 in each park. So rides you can pay for individually rather than via Genie+.