I think Transformers, Despicable Me, Jurassic Park and Men in Black are good to watch.

I have seen Beetlejuice in the past just milling around outside the theater at random times during the day as well.

I wish I had watched Men in Black with DD18 before we went. I remember the movie being a lot of fun and the ride was probably her favorite outside of WWoHP.

Did you watch the video of Taylor & Michaela trying every type of Voodoo donut available?

It wasn’t as helpful as I was hoping.

It seemed like they were mostly trying to one-up each other’s descriptions instead of giving me useful feedback. Because “if you like butterfingers, you’re really going to like the butterfinger donut” isn’t exactly insightful.

You must get the Voodoo Donut! Fun, filling and who doesn’t love a donut that incorporates witchcraft?

It’s definitely on my list because would get great for breakfast, but isn’t absolute high priority since we have a location locally (that I haven’t made it to yet, but DH has).

Exactly! And that raspberry filling (blood) is so tasty

So this finally happened, which aligns to the closing times OI has told us: 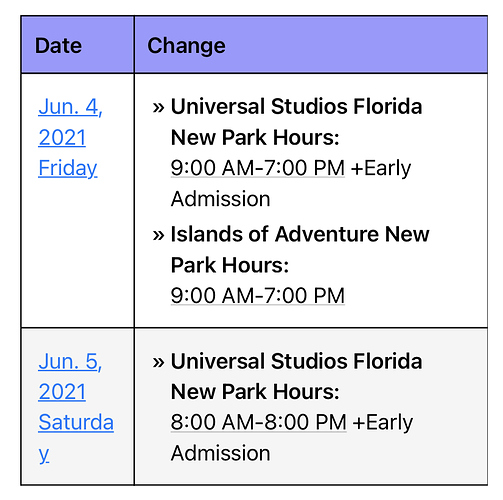 So does that mean the showtimes in TP should now be close to final? Because I’m contemplating changing my plans completely if so…

Since we’re going both nights, I was planning to go to the shows at USF on Friday pre-close and Popeye at IOA on Saturday pre-close.

(Still no Beedle The Bard after 2:30pm either day though.

which aligns to the closing times OI has told us

Sigh. TP still has IOA closing at 9pm on Sat, and it should be 8pm (Universal app and OI both agree to that). Think they’ll catch that automatically pretty quick or do we need to ping someone?

TP still has IOA closing at 9pm on Sat

Yea! That’s been fixed to be 8pm now.

But they’re still showing USF having Cinematic Celebration at 9pm despite closing at 8pm on Sat.

With no evening spectaculars at Disney, it would be a nice-to-have. Guess I’ll leave room for it in my plans.

I’m so interested to see what VC does to the meetup. I know they have to hedge their bets and probably won’t announce that it will be available after hours, but there’s always a chance.

Otherwise, we’ve got the two night tickets so may invest some regular hours time one of the days if the technical rehearsals are going on.

Yeah, same here. After listening to reviews, it might be out of our league.

With some trepidation, our kids did all the Disney rides last Jan, which the DS11 twins were definitely not too sure about going in. And I could definitely feel my age a bit.

I’m trying to set our TP to work our way up in intensity of rides at UOR, with the agreement that anyone can start opting out if they stop enjoying them. And VC definitely looks like it’s the top of the ride pyramid. But if it gets people out of other lines…

Yes, to MIB. We watched all of them one after the other to ‘prepare’ for our first Universal trip. I enjoyed the sequels the second time around more than I had the first time. I think because when I watched them spaced out by months/years the sequels seemed silly-stupid. Whereas when we watched them back-to-back they were silly-wonderful.

Definitely, ET also. I was shocked at how well that has held up. The cars, clothes etc were dated, but nothing else was.