Talk to me about transportation at Old Key West.
I’m trying to decide if we need to rent a car. We’ll be at OWK for 4 nights in March after 4 nights at Universal.

First night, I’d like to get to Poly or Contemporary for dinner and to watch the fireworks. What’s the best way there and back if we don’t have a car?
We’ll then visit AK, Epcot, and HS in the following days. If transportation is quick and easy, we may come back mid-day for a rest.
I’d like to RD Remy our Epcot day, so possibly that means getting over to the Crescent Lake Area early that morning. Or maybe it’s cheaper to buy G+ for the 4 of us?

There are multiple bus stops at OKW. How does that work? One bus to get you to the Hospitality House? Each park bus goes to every stop? Is there a general route that the busses take, such that getting on at X stop will guarantee the bus isn’t full?

Finally, getting TO and FROM OWK. As I mentioned, we’ll be at Universal the days before, and then head MCO on our last day. I don’t have anything booked at all for transportation yet. Likely we’d do Lyft for these 3 (MCO → Universal. Universal → OWK. OKW → MCO) if we don’t have a car.

We’ve never driven in Orlando before, and DH isn’t a fan. If we can take mass transit, he’s all about that. Usually I drive and he navigates. But, I think I can get a pretty good rate thru Avis if we do rent a car. I even think they have a desk at Royal Pacific so I wouldn’t have to drive for that half of our trip.

I highly recommend a car at OKW. The bus system works great but it takes what seems like a long time to make the loop (I’d estimate 12 minutes). If you are lucky enough to be near the hospitality house, you can hop on at the last bus stop and hop off at the first bus stop and cross the road. Of course then you have to worry about whether there will be spots left when the bus finally makes it around the loop (I don’t know how often they run out of space, but it would stress me out).

If you want to try your luck with the buses, I would go with Lyft from UOR to OKW and MCO.

Here’s the basic bus route to my recollection. The first stop is on the main road (Peninsular Road), which is across the street from Hospitality House. Close enough to walk relatively quickly. Then it loops toward the end of the resort (stops 2 and 3), comes all the way back to Miller Road (stop 4), and finally stops at Hospitality House (stop 5) before leaving the resort. I am not aware of whether they sometimes send a bus directly to Hospitality House. 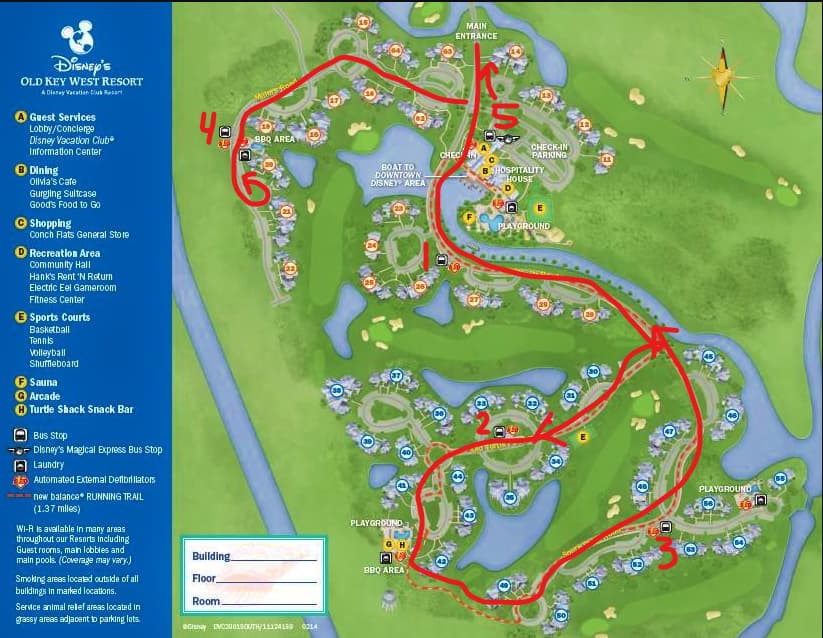 Our OKW bus experience is nearly 15 years old tho I can second @Jeff_AZ that the whole route is time consuming. We were in building 63 and quickly adopted a version of Jeff’s plan. At that time the first stop was Miller Road, then the stop Jeff has marked 1 with the last stop at HH. When leaving the resort we’d walk over to HH. Upon arriving at the resort, if we weren’t too tired, we’d exit the bus at the second stop.

On our recent trip in June with the weather so hot, it occurred to me that where that resort’s bus stop is at each park might be more important to me. If I were depending on Disney busses, which I generally have.

I’d like to get to Poly or Contemporary for dinner and to watch the fireworks. What’s the best way there and back if we don’t have a car?

Bus to MK, ferry or monorail to Poly, monorail or walk to Contemporary.

We’ll then visit AK, Epcot, and HS in the following days. If transportation is quick and easy, we may come back mid-day for a rest.

Buses aren’t bad, but they do take a full circuit through the resort before heading to park.

getting over to the Crescent Lake Area early that morning. Or maybe it’s cheaper to buy G+ for the 4 of us?

You could Uber or Lyft to an Epcot resort, or bus to HS and Skyliner to Epcot.

There are multiple bus stops at OKW. How does that work? One bus to get you to the Hospitality House? Each park bus goes to every stop?

Each bus goes to every stop in a predictable loop. Every bus stops last at Hospitality House before heading to destination, which means you can use any bus as a shuttle to Hospitality House.

I love OKW. But I will say that of all the resorts I think it’s my favorite to have a car. Not just because of the internal bus that can take a few minutes, but because here you park directly outside of your unit, kind of like at many townhouses. So it’s very quick in and out and no huge parking lot to walk through or long hallways to navigate. Also, OKW is incredibly centrally located. It literally takes 5 mins to Epcot, maybe 10 to HS, and 10-15 to AK and MK which are at the extreme ends of WDW proper. So being so central, you could hop in your car and arrive at destination before that internal bus leaves the resort. I personally prefer to do the driving, and getting around WDW property is very easy as there is plenty of good signage. The only time I don’t drive is if I’m imbibing.

Here is the bus route

I own at OKW and it’s truly home to me. It doesn’t have all the pizzaz of some resorts, and it isn’t walkable to any theme park and doesn’t have a theme park view, but its rooms are the largest of each category on property, and it just has this vibe that doesn’t feel like a resort but somewhere that you could live.

MOre importantly, I think the bus route is scary because the bus has to maneuver through tight parking lots. It’s a white-knuckle ride and I had to keep closing my eyes. After one time on the OKW bus loop we drove our car to the parks instead

For me the worst part about the big multi-stop resorts is the nighttime rides home, when the lights go on each stop, then go off, then on again at the next one.

That or being at the last bus stop and having the bus always be full by the time it gets there so it drives on by.

We loved OKW and the buses didn’t bother us. But then we use buses all the time at home….

All the buses from the parks do the same route, which I think was:
Peninsular Road
Southern Point
Old Turtle Pond
Miller’s Road
Hospitality House

DS buses go to HH first, then the same route ending at HH.

Thee is also an internal shuttle bus that takes you to HH.

It also has to be said we just walked to HH if that was our destination. From Old Turtle Pond it was under 10 minutes. (That’s about the same to us though as our local shop & coffee shop, closer than the doctor or kids’ primary school). The resort feels and looks spread out, but isn’t really.

But if you’re not used to using buses it will seem big I guess.

MOre importantly, I think the bus route is scary because the bus has to maneuver through tight parking lots.

No it really doesn’t. And there’s nothing scary about it at all. It stays on the main roads and follows the route it does so it never has to take a right turn, which would be tight and scary.

Maybe you are being funny?

Thee is also an internal shuttle bus that takes you to HH.

Not really. But all buses stop at HH last so you can use any bus to get there

We used the bus at OKW. Yep the worst thing is at night when lights flash on and you are asleep

We did just do a bus tour of the resort for fun though.

Requesting a building near the first stop is a good plan.

Requesting a building near the first stop is a good plan

Peninsular Road is not only the first stop so the most empty, it’s also super close to the HH - over the bridge and across the street. Miller’s Road isn’t bad either (though the bus will be squishy at peak times), if you’re close to that intersection (Buildings 62, 63, 64, an 16) because the walk to HH is quick as well.

I’ve stayed at South Point, Turtle Pond (x2), and Miller’s Road and I think I liked Miller’s Road the most. South Point was farrrrrrrr away, though if you’re relying on buses it’s the second stop and in the mornings we found it mostly empty (when we used the bus, that is). Also at South Point I could see/hear Buena Vista Drive which was unmagical. Turtle Pond has a snack shack at its quiet pool which is nice and it’s not far from everything and we never had a problem with the bus

Well we used one twice! It said Resort Shuttle on it.

I wonder if that’s a thing of the past?

We were just there, over Christmas!

Nobody has mentioned that in my OKW group. I’ll have to ask. The photo I posted was from mid December.

Yes, that’s what was up at the bus stops.

The resort shuttle just turned up a couple of times, it wasn’t on the bus times board either.

We’ve been in Turtle Pond a couple of times and liked it, but usually only stay there in Preferred.

usually only stay there in Preferred.

There isn’t a Preferred category, but there is “Near Hospitality House”. Same points/cost, just guaranteed location.

Clarifying in case someone were to look for Preferred.