So, here’s my first go at a trip report. This forum is a fantastic community full of great people, and I’m glad I’ve gotten to be a part of it during the entire planning process. While I don’t post a whole lot, I do read (almost) everyday and have learned so much. Thank you everybody for your help and kindness.

[I thought I’d take a moment to explain my stupid screen name too, because when you look too quickly it looks like “terd”. When I joined TP, I did so because I bought the Unofficial Guide and I wanted access to the CCs and the TPs obviously. I never thought I’d post in the forum. So, now I’m kinda stuck with the username I chose. “Terp” is a reference to the mascot of my alma mater, Univ of Maryland, who’s mascot is the terrapin, or “terp” for short. Ok, just wanted to get that out there.]

My first trip ever was when I was 3 years old, when the only parks were MK and EP and the only resorts where the Contemporary and the Poly. Then, DW and I came a few times before kids and we realized we were both huge Disney fans. Now, DS1 and DS2 are in our lives and it’s time to raise a new generation of LIners! My parents are also coming along on this trip. Disney really is such a magical place, where 3 generations can all come together and have a trip of a lifetime!

We woke up to 19 degree temps in the mid-Atlantic at our home airport and were fully ready to shed the winter coats for some 70 degree days.! Even DS1, who is not a morning person, was wide-eyed and bushy-tailed at 6:00 AM. 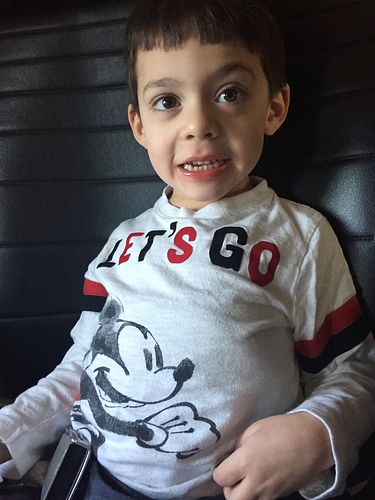 We arrived at MCO around 11:00 AM to sunny skies, mid-70 degree temps, and a relatively uncrowded ME queue. There was a bit of chaos as rumors were spreading about an apparent death at the MCO Hyatt. Apparently, it was a TSA agent who fell to his death from a balcony at the hotel and, as chaos ensued, people were running, unchecked, through the screening area into the secure part of the airport. I’m seeing reports that there were over 100 delayed and cancelled flights in the afternoon. That was a really unfortunate occurrence, but fortunately for us, we must have missed the commotion, because we had no delays into or out of MCO. There were only about 15 people on our bus to the Poly and GF! The driver said it’s been a really slow weekend of passengers for him… which may be a good sign for us! 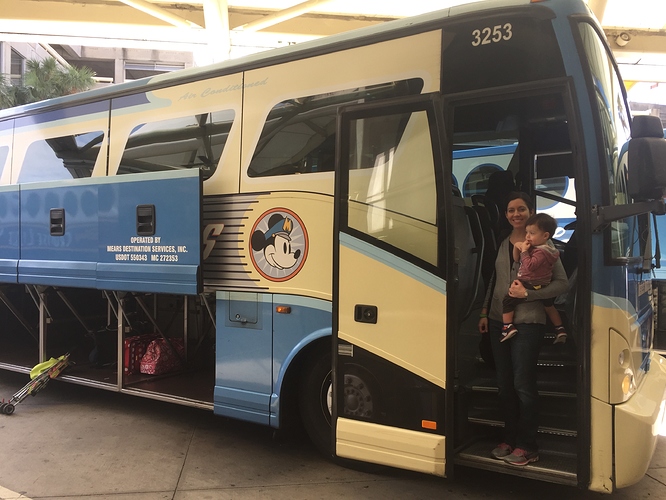 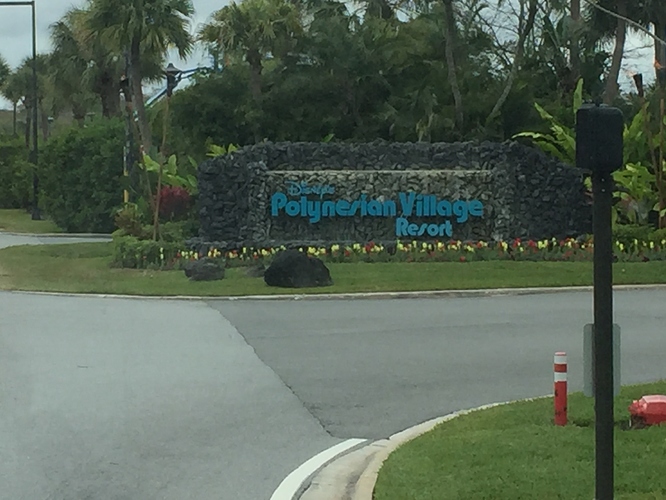 I’ve made no secret about it; I’m really disappointed they destroyed the Poly lobby by removing the waterfall. But, it’s still my all time favorite resort because the theming and the location cannot be beat. Just a little update on the AP procedures: I can confirm that you are able to upgrade to an AP at the reception desk. While checking in, it took about an extra 5 minutes for her to put in some info, and bam, instantly I could see the Platinum pass on MDE. She gave the little yellow pass holder’s card to get my in-park discounts and just like that I became an official owner of an AP.

A leisurely lunch at Captain Cook’s provided some time to adjust to being on Vacation time.

Since it was only 1:30 pm, our room was not quite ready, so off to Epcot we went. Check out that blue sky! I love this pic of DW and DS1. It has so many of my favorite things in 1 picture. 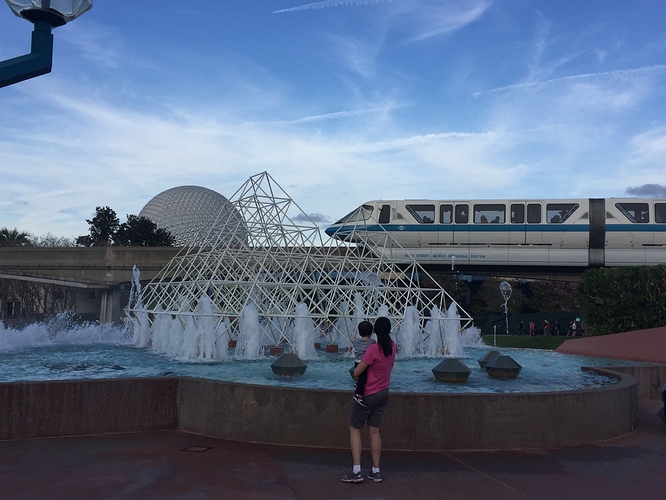 Then, off to Soarin’. With rider swap, DS1 and I got to ride twice! Here’s DS1 with nana and pop pop.

Then, a tame boat ride on Living with the Land. Again, there’s some mild disappointment with the removal of the “Listen to the Land” folk song and the CMs that used to be the live guides on the ride.

I’m so glad we kept Garden Grill for our first ADR. Some of you may remember, I was having real second thoughts about GG. But, DS1 had a blast with characters and the food was actually DELICIOUS! I really loved the pot roast, and I’m not even much of a red meat eater.

GG is really awesome for character interaction. It’s a much smaller restaurant (than say CP) and each character came around about 3 times while we were there, and they continued to interact on each visit. DS1 was absolutely in heaven. 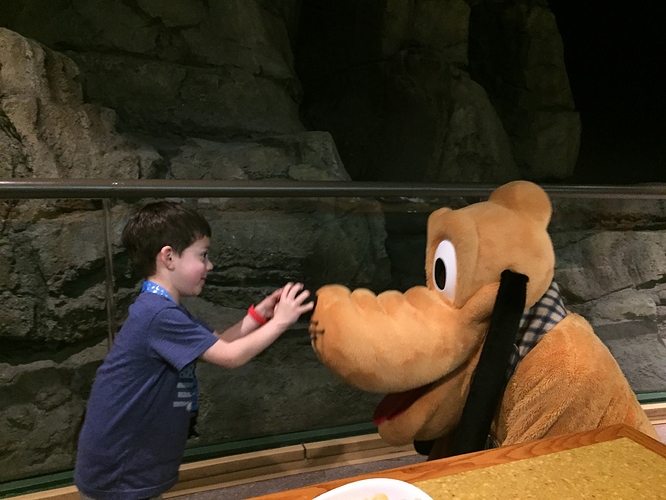 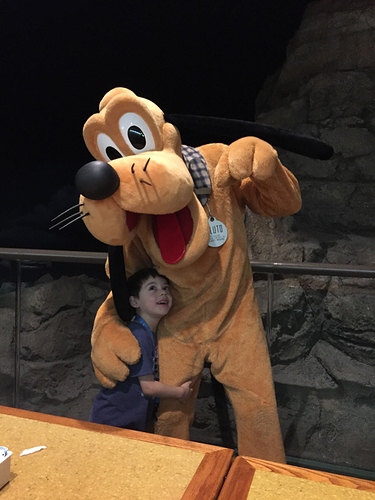 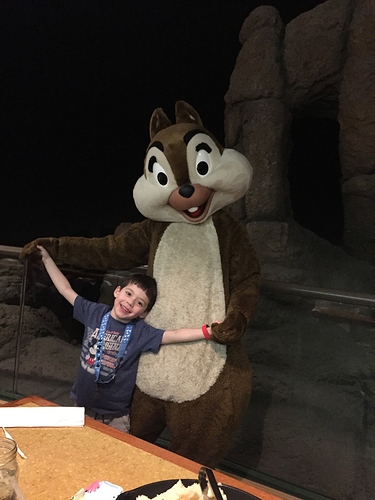 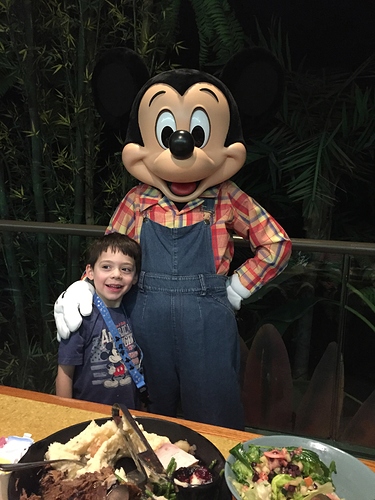 We turned in early so we could finally get unpacked and rested for an early day at MK. As I’m writing this, it’s a little before 6:00 am, so gotta shower, get some food in our bellies and hop the monorail for RD! See you all later… I’ll keep you posted!

Great day1! The convenience of the Poly is just amazing… looking forward to reading the rest!

Congrats on the AP! I’m loving your report so far, the pics are lovely.

BTW you can change your username in your profile if you want to.

Great report and beautiful photographs.You are making amazing multigenerational memories. Congratulations on the AP. Thank you for sharing.

Great report ! Thank you! Wow! You really had a full day!

Excited to follow your trip report!
You threw me a bit saying DS1 rode soarin with you. Then I realized you meant ds firstborn and ds secondborn not their ages.

So, after a good night’s sleep, all 6 of us managed to wake up in a great mood. Some Mickey waffles helped the situation. 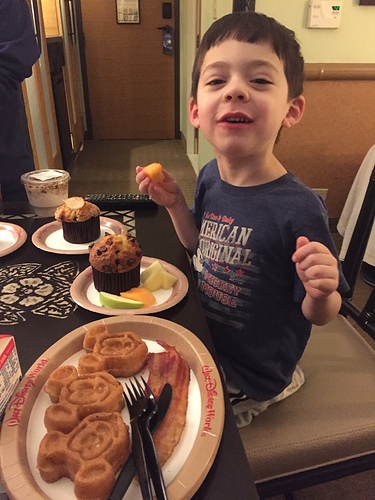 Then, out the door and on the monorail by 8:00 am. We made it to MK and were through the gates by 8:30 for the Let the Magic Begin show. 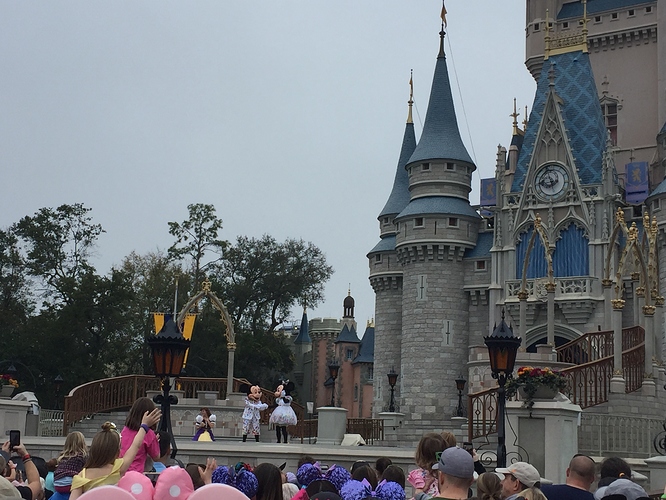 Then we rope dropped Winnie the Pooh and Peter Pan. That’s what you do when you have kids under 5! Then off to Haunted Mansion. No lines yet!

So, I tried I new strategy today, with no TP. Yes, you heard right. Instead, I stacked all 3 FP+ before noon, with the intention of then tap, grabbing, and modifying the rest of the afternoon as @OBNurseNH has described in a past post. Let me tell you, it worked really well! We didn’t wait more than 10 minutes all day long, and crowds were definitely moderately high. So here’s how the day went. First FP+ was BTM used at 9:45 am (9:25 -10:25 window). Second FP+ was Splash Mtn, used at 10:15 am (10:25 - 11:25 window; they allowed us to use it early). DS1 was afraid of getting wet and covered his face a lot, so I’m not sure how much he saw.

Then Pecos Bill’s at 11:00 am for an early lunch. Third FP+ was Jungle Cruise at 11:45 am. We walked in to the Tiki Room for a quick, ahem, nap. Then, I snagged the Fourth FP+ for Pirates for 5:30 but was able to keep modifying until I got 1:00 pm. I got the Fifth FP+ for Under the Sea for 1:30 pm. We did get stuck on the ride for about 20 minutes in front of Ariel, which was really creepy because she was staring at us the entire time. 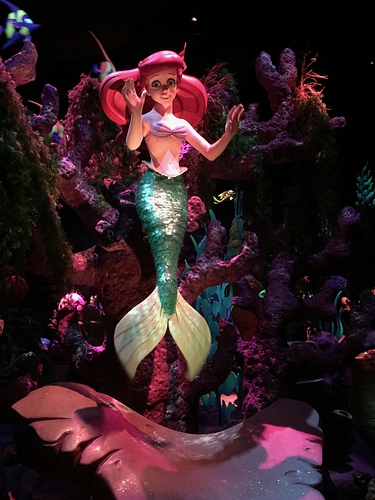 I picked up the Sixth FP+ for Dumbo for 4:00 pm but was able to modify until getting 2:10 pm. Quick snack at Gaston’s Tavern.

And a new light spinner toy for DS2. 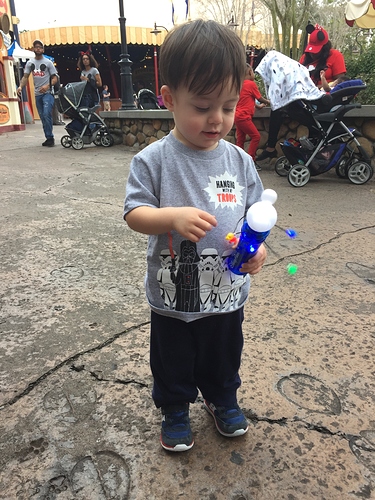 I picked up the Seventh FP+ for Barnstormer for 5:30 pm and modified until I settled on 3:00 pm.

Then an early dinner at BOG. 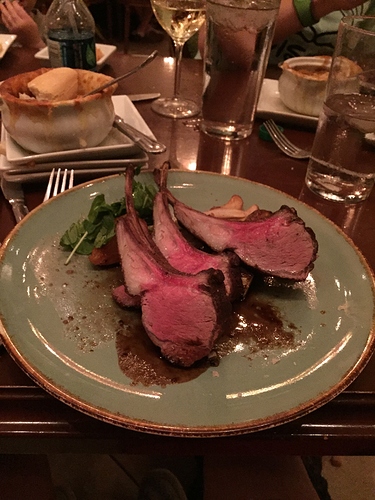 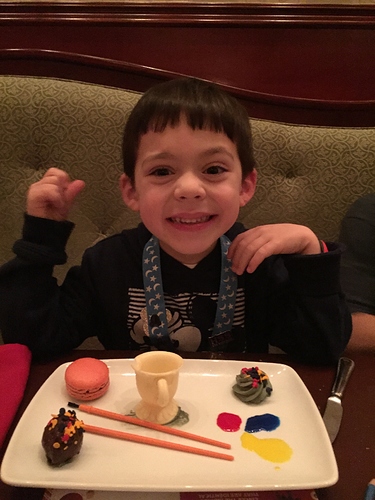 And of course, the gray stuff… 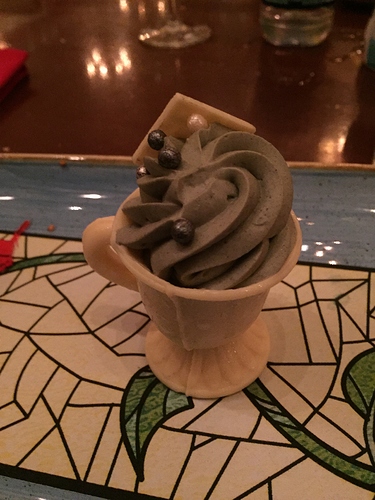 I then picked up the Eighth FP+ for Buzz Lightyear’s space ranger spin for 5:35, just in time to put Emperor Zurg in his place. 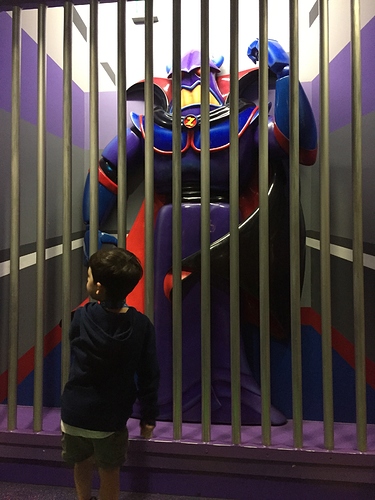 Then, we staked out our space for HEA. 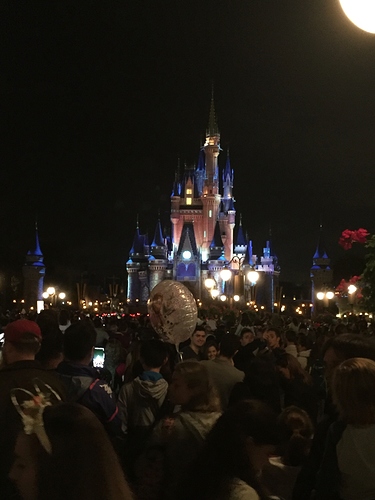 It was definitely a PACKED day, but the kids did really well. I think it’s because we never waited in a standby line after 9:30 am. We managed to do 12 attractions without waiting for more than 10 minutes at any single ride. Plus we took lots of breaks for snacks. So, at least at MK, I think I’ll use this technique more often. it might not work as well if you’re only trying to ride E-ticket rides like Space Mtn and 7DMT all day long. Ok, well off to bed for AK tomorrow! See you all soon!

Now that we have our first trip under our belts, I can see us using this technique in MK too. It’s kinda fun to let the FP take the lead!

Yeah, I kinda just took what was available. The app is definitely weird, whether due to a glitch or by design. You’ll see a time for, say, Pirates way late in the day so I would grab it. Then go in to modify it, and maybe after like 3-5 tries, lo and behold there’s a time in the next hour available. It definitely works in favor of those in the know about this “glitch”.

We did some of that as well. It’s very weird the way the app works.

When you were at Gaston’s were you able to use SC or did they stop that?

You are crushing it. Thanks for sharing, especially the 2xDS happiness.

What an amazing day. Well done.

Yes, we used snack credits for the croissant and the LeFou’s brew!

How old are your boys?

How is the younger one doing? We leave in 12 days - we have an older son (8) and younger 20-month old… Any tips for Disney with toddlers?

Looking forward to following along

He’s actually doing really well, but fortunately, he’s always been the one to go with the flow.

Everyone says take the afternoon break for naps, and for many people, that is probably perfect advice. But in lieu of doing that, we took about an hour break from rides where he just slept in the stroller as we walked around and had a snack at Gaston’s. Then he was ready to go again after that.

The only moderate challenge was getting him to sleep in the pack-and-play that Disney provided us. It’s kinda lumpy and flimsy, so he would wake up every hour or so and cry. So last night, I took several of the blankets from the closet and made a “mattress” and it worked like a charm. Last night, he slept like a log. It might have something to do with our busy day though too

Otherwise, he was really fascinated by most of the rides, including HM and Pirates. HEA was loud and borders on sensory overload, but he was captivated by that too. We were a little worried about those things, but everything was fine.

I’ll let you know how his stamina is for the rest of the week!