Has anyone found a way to keep your glasses from fogging up when wearing a mask? I have seen some metal strips for sale, but they indicate that they are for sewing into/onto a mask. Are there any that you can just place over the top of the mask along the bridge of your nose? My glasses fog up in cool temps, I can’t imagine how bad it is going to be in Florida heat and humidity.
What have any of you found that worked (or didn’t work so I can avoid that attempt)?
Suggestions?

I’m going to try these. They should be here tomorrow

Spit might work, too, but spitting on your glasses is probably not something you want to be seen doing during a COVID epidemic.

That works with snorkeling masks…

It works with pretty much everything. Ski masks, too.

I never had a problem with my glasses fogging up during surgery, but my colleagues used Sea drops in the OR.

Of course, DH’s solution to his glasses fogging was to get Lasix.

I look forward to hearing how these work for you. I have added them to my Amazon list.
Because I went almost nowhere for a year, I am just now discovering how much my glasses fog up when wearing a mask. WDW in 23 days, so I need to figure this out.

I’ll report back. @OBNurseNH recommended some adhesive things like this and I couldn’t find her link (too lazy to search and not easy to search on the forum) so I found these. I have ones that I have sewn in too, but my husband keeps breaking them. I’m hopeful…

Make sure your glasses sit on top of your mask, not on your cheeks. Works most of the time.

…interesting… I find the opposite to work for me

Honestly my biggest problem is that the mask pushes my glasses off my face. I can only wear my Rx sunglasses w/ a mask. SO annoying!

The aluminum strips helped with my fogging by at least 75% on my March trip. 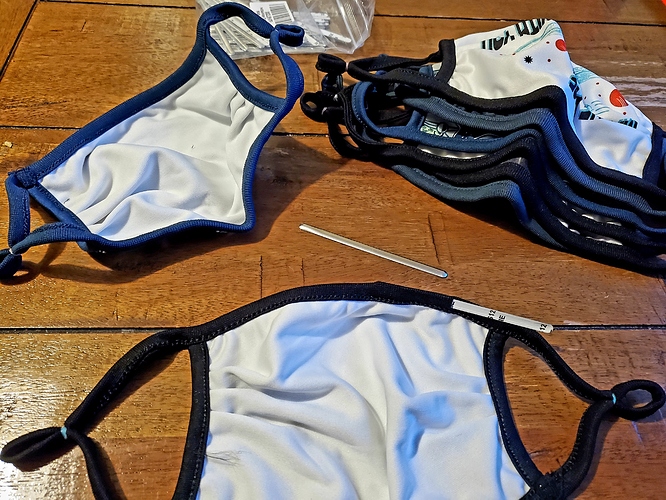 You’re the one that taught me, remember

woohoo… I thought it looked familiar

…but you know the Jungian collective conscious and all…

This has been working great for me:

Amazon.com: Anti Fog Spray for Glasses | Prevents Fog on All Lenses and Devices...

I use that as well. Does a decent job, along with having a wire in the nose of the mask to have it fit as snugly as possible.

@illini74 I will say I experienced less fogging in Florida than I do here in Washington. I think there’s some benefit to outside air being close in temp/humidity to your exhaled breath! The worst here is when it’s cooler and still humid. My glasses fog so bad if I’m walking outside with a mask (walking with a friend so not maintaining 6 feet distance) that I have to take them off. And my bangs are soaking wet by the time I finish the walk. I have never experienced anything like that in Florida, even last August.

outside air being close

This reminded me of an old expression I have to share. Some folks around here (Especially my uncle) always said “close” instead of humid.

I always poked fun at him and said “close to what?”

Ambient temperature variance is pretty much the number one cause of fogging.

When the temperature of the lenses is sufficiently colder than the air it is coming in contact with, moisture in the air condenses on the lenses. It is the same phenomenon that causes the outside of a cold beverage to sweat!

When we were there in August, I found the time most likely to fog up was if I had been inside and air conditioned building for long enough time that my glasses matched that temperature. You go back outside, and the humidity condenses almost immediately. I also found the my breath was more likely to cause the condensation while inside a cool building.

Shout out to science