I like to use Wikipedia to sort this stuff out. This page has info on all the various movies, TV shows, and direct-to-video things (One Shots).
Outline of the Marvel Cinematic Universe - Wikipedia

Yea this is great, I’ve had that page open in my tabs for months since I started going through these movies

When I started I used this list (among others) to figure out the must-watches. I’ve since seen many “non-essential” ones too but I pretty much agree with this list (done before Endgame): The MARVEL MOVIES: What to Watch — and What to Skip | 13th Dimension, Comics, Creators, Culture

Disney announced delays to several MCU (and the next Indy) movie premieres. Several just bumped down the line to the next one’s date, like dominoes. 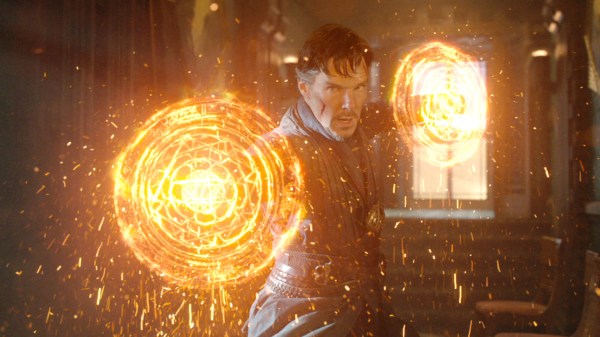 I guess that gives me more time to try to get caught up before the next Dr. Strange one, with all the multiverse stuff that’s been coming into play.

Cloak and Dagger is part of MCU. It aired on Disney’s Freeform channel. I think I watched only the first episode of it when it came out. I’ll be interested to know what you think of it.

Cloak and Dagger is part of MCU.

I’ll be interested to know what you think of it.

Only 3 episodes in, but I like it so far.

Is one of these Guardians Vol 3?

Guardians Vol. 3 is set for May 5, 2023. I think they leapfrogged Ant-Man and The Wasp: Quantumania over GotG 3. The author of this article discusses why he thinks it stayed in place. https://screenrant.com/guardians-galaxy-3-marvel-release-date-no-delay/ . I also wonder if the connection to the EP ride is a factor.

NOPE!! I asked Gunn on Twitter and actually got a response!! 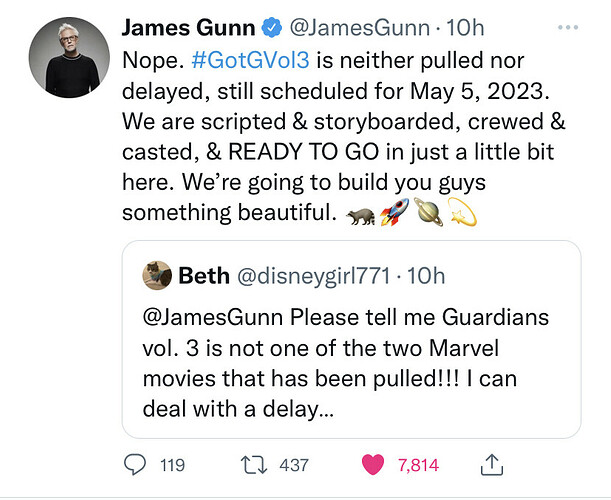 Yeah, I squealed when he replied directly. 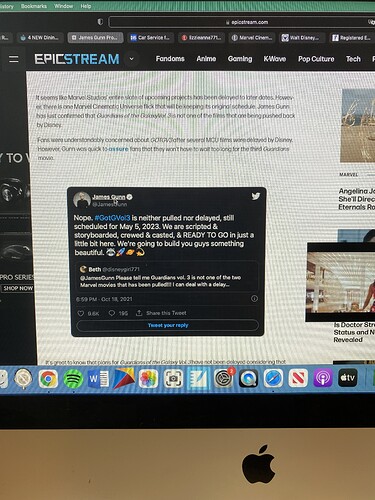 The other article I saw just said “One tweeted…”

This one actually screencapped it!!

Not sure where I left off with updating my watchquest.

Really enjoying them all, obviously some more than others. I really like Iron Man (the character more than anything), I loved Winter Soldier, and GOTG might be my favorite so far.

15 movies to go, 3 weeks to DCA… probably not gonna make it, but I’ll give it the old college try!

I love the GOTG soundtrack

We start watching it and DH says, “This one is kind of a comedy in some senses, or at least has a lot of comedy woven in.”

And then the beginning happens. And I’m like, “Comedy, huh? I don’t think you are using that word correctly.”

I loved how this one swung me all around. It had a little of everything in it. Action, adventure, comedy, drama, romance. And yes, a really fantastic soundtrack.

Is it wrong that I kept thinking of Peter Quill as Han Solo? The handsome scoundrel.
I cannot believe that Bradley Cooper is the voice of Rocket.
I loved Drax

And then the beginning happens

Is it wrong that I kept thinking of Peter Quill as Han Solo? The handsome scoundrel.

No, they’re both heroic space pilots

I cannot believe that Bradley Cooper is the voice of Rocket.

I think the only time you can tell it’s him is when he laughs mirthfully as they’re discussing plans in Yondus cargo area. It’s clearly Bradley Cooper (

) laughing, but when he’s talking it’s very unlike him.

Too much bad CGI in this one, especially in the opening scenes. If I can pick it out, it is definitely not good because I don’t generally notice that stuff.

Otherwise an interesting story. Battle scenes are way too long, but that’s my general take on almost all of these anyway. Keep telling me the story with the battle, or shorten it up.

Interesting to meet some new characters. Also interesting that when one of them first appeared he was red; I said, “Why are the villains always red?!” and then he levitated while looking out the window and turned not-red. And now he’s a good guy.

But seriously. They are always red.

Also, was Ultron a thing before Disney acquired Marvel? I ask because I am wondering if the “got no strings on me” thing was there originally or whether it was the thing they added to tie it in to Disney. If Ultron existed (ie comics) before the Disney acquisition, was that how he stated his freedom or was this a Disneyfication? I’ve found the other Disney tie-ins in some of the other films too; can’t recall them off the top of my head. But am I presuming too much by thinking this is a deliberate thing to link the two together?

You could watch Dr. Strange out-of-order in order to get that part of DCA. Others could say how important that is to the campus since I don’t know!