Kids activities to do in line

I have a DS9, DS7, and DD5 and I wondering what games or activities people do in line. I know many of the lines have a lot of interesting things to see and interact with, but there’s still going to be a lot of downtime. Has anyone made scavenger hunts or activities or Disney themed games for waiting in line?

We like to do “I Spy,” Hidden Mickey’s and heads up (an app game). There are lots of different Heads up games for free and to purchase and at DLR (I am assuming it is the same for WDW) you can down load a free Disney version, otherwise it is .99 I think. You can also purchase one you create yourself. My boys are now teens, so I try to come to come up with things that will engage us as a family, or they will get lost in their phones!

Allow their minds to wander and wonder. No need to keep them entertained. As I tell my kids, “It is good for you to be bored.” And it is.

I would NOT let them spend that time looking at a phone.

We played Heads Up a lot while waiting for the parks to open at rope drop and even made friends and played with another family once while waiting out a rain storm in AK. I like it because everyone is involved in the game and interacting.

I like trivia. I bring cards from old trivia games.

I have this game and plan to use it on my upcoming trip with DD 7, DS 5 and DS 4
World of Disney Eye Found It Card Game 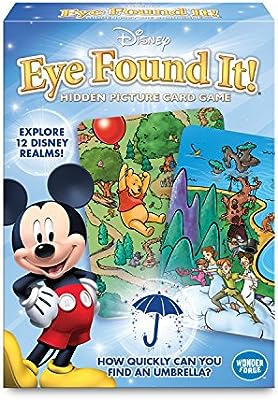 Explore 12 beloved Disney realms, From Radiator Springs and Alice's Wonderland to Peter Pan's Never Land and Pooh's Hundred Acre Wood. Be the first to find the hidden treasures to win!

another fun idea: remember 7 degrees of Kevin Bacon? My friend Stephen who was a HUGE Disney fan and a big movie buff used to play that waiting in line for rides (in the 90s…) but a fun twist is 7 degrees of… and pick other actors/characters that your kids could follow along with (if they are into movies).

I agree with @ryan1 - I do not understand this need to make sure that children (or even adults) are entertained all the time. You have to wait to do something you want to do - get used to it.

And get off my lawn while you are at it…

While I don’t completely disagree with you or @ryan1, It is okay for kids to be bored once in a while and force them to use their imagination and creativity. However it is okay to also prepare and have activities to make the time go by faster. It is also a wonderful opportunity to engage with your family. Most of the suggestions given on here sound like games the whole family can participate in.

Another consideration is special needs. My son has ADHD and while it is not severe enough to warrant DAS, long lines can be very difficult for him, us, and anyone else in a 50 foot radius, so we do let him play on his phone some (but we limit this, as vacations are time for us to connect) and we do play heads up, eye spy and look for hidden Mickey’s and I see that as a positive, not a negative.

Trust me, my children will have TONS of opportunities to be bored this summer, but in line at Disney doesn’t have to be one of them.

I’ll not apologize nor back away from my previous statement. It was a general answer to a general question. Obviously, special needs/circumstances might dictate a difference, but in general, I don’t see a need, particularly for the ages listed, to look for ways to further entertain children while in line.

That isn’t to say that naturally such things don’t happen. We will, from time to time, be on the look out for hidden mickeys, etc. But I have 5 kids, and we spend several days at amusement parks pretty much every year. Never have we found a need to prepare things to do while in line. Further, we have a 20 hour drive there and back (40 hours total). We typically provide 1 movie to watch in the van per day. The rest of the time, the kids are expected to fill their time. They might bring books to read, certain toys (when younger), logic puzzles, etc. But they figure out what to bring. (For the long trips to Florida, we sometimes DO bring a book on CD to listen to, but we often don’t end up using it.)

We talk, we draw together as a family. That is the point of it all, after all. But when I start to feel the need to have to keep my children entertained rather than them being able to entertain themselves, I would consider it a failure on my part as a parent.

I also remember my own childhood growing up. It was in those times of “boredom” that I feel I grew the most, not only creatively, but also learned to become more observant of my surroundings. I started to pay greater attention to how things worked, etc.

Your kids are old enough that I wouldn’t worry too much about them being too bored in line. There’s so much to see (even just people watching).
That said, for my DS3, I packed fruit snacks and crackers for really long lines (over 30 mins long). We only had to wait in a line this long 2-3 times, but after about 10-15 mins, I would give him a small package of fruit snacks and that would keep him entertained for another 10 mins or so.
He also had a lightning mcqueen car to play with in line… He’d ride it along the railings and such.
I don’t think you have too much to worry about with the ages of your children. There is just so much to see, even in “boring” lines.

Allow their minds to wander and wonder. No need to keep them entertained. As I tell my kids, “It is good for you to be bored.” And it is.

I total agree.
It has been studied, and proven that boredom improves a child imagination which in turn help their ability to learn.

I’ll not apologize nor back away from my previous statement

Nor should you. Sounds like you are making the right choice for your family, as am I, for mine. I simply wanted to offer an alternative perspective. We each know our families best and act accordingly. And again, I don’t disagree with your stance, but I also see the usefulness of have a couple of tricks up your sleeve (or in my case an app on my phone).

I totally get where ryan1 is coming from and I agree fundamentally that constant stimulation is detrimental to development (I am a teacher and have a masters degree in youth education), but I also think it’s kind of out of place to interject that conversation into a topic asking specifically for activities.

The topic wasn’t “should I have activities in line?” or “what do you think about boredom?” or “I need to keep my kids constantly entertained; Help!” It was, “given that we’re going to be standing in line a lot and given that we may want some activities at some point, what are good ones?”

It was, “given that we’re going to be standing in line a lot and given that we may want some activities at some point, what are good ones?”

And my advice to that is the same. Because I would NEVER advise (under normal circumstances) to entertain them. Instead, my advice on what “activities” to do is to allow their minds to wander and wonder. I then explained why.

But your wording for the question isn’t exactly what was stated:

…wondering what games or activities people do in line.

My response to that was entirely appropriate.

I also like to trade/give pins. It is a fun way to interact with your line mates! I will go on eBay and buy inexpensive ones. I alway check with parents before offering them to the kiddos. It is a great way to spread more pixie dust.

We’ve played the alphabet game by naming Disney characters that start with each letter. I also carry around little toys in my hip pack - mini animals/dolls, little pads of paper & pens, even bubbles to blow.