Just when I thought I was out …

This news — well, speculation — from the (London) Times:

They will meet at the G7 summit in Cornwall, which begins next week, and Johnson will push for a quarantine-free air corridor with the US.

Under one set of proposals, discussed with officials in Washington and Whitehall, people from the US who had received both jabs would not have to self-isolate on arrival here, even if the US was placed on the red list or remained on the amber list.

Plans circulated within government refer to a “green channel” being set up for “fully vaccinated individuals”.

The UK is hoping that people who want to holiday in the US would be given similar exemptions.

The deal would be the first arrangement allowing vaccinated travellers preferential treatment by the UK and would be a diplomatic coup.

This is potentially game-changing. I’ve been whinging for some time about the US not reopening its borders. But there’s also the hassle of quarantine on return to the UK. These proposals deal with both of those issues.

Officials involved in the talks fear that the US administration, whose official policy is still to discourage all international travel, has serious reservations about a bilateral deal.

US officials have made clear to their British counterparts in Washington that any immediate deal is unlikely.

Senior figures in the Biden administration have also made clear to UK ministers that the White House is wary as giving privileges to UK travellers could leave the president vulnerable to international criticism.

His cabinet fears that prioritising a deal with the UK, another wealthy nation with a successful vaccine programme, would send the wrong message to the international community.

As things stand with my current plans, COVID will have resulted in a gap of over two and a half years between my December 2019 trip, and August 2022.

It remains worthy of note that COVID has caused the US to isolate itself from transatlantic travel for well over a year now, with no end yet in sight. That is, of course, unprecedented in the entire history of the US, outside of wartime. It continues to boggle my mind how relaxed you people seem to be about this, as if the US can exist in solitary isolation forever with no consequences to itself.

I should add that I have mixed feelings about this.

I am genuinely very pleased with, and very excited about, my two-cruise summer. I’m not necessarily ready to just give up on that. There were more reasons to cancel my August trip than merely the travelling difficulties.

Back away from your computer.
Try these cruises.
WDW will still be there next year, with more of their normal offerings.

Yep. I just got back from a trip and there are still a lot of experiences missing from Walt Disney World. I was happy to be there but it is not the same place at the moment.

The more that comes back… the more excited I am for my trip next year.

I just upgraded the drinks package on my second cruise (I love that phrase) to the Premium Plus option.

It includes, for example, these items:

You do the math.

WDW is dead to me

Yes. But does anyone want to place bets on time of resurrection? Because we all know @mousematt is going to be loving on some zombie Disney soon enough…

The current plan is to return to WDW in August 2022. With a sneaky trip to DLP in December of this year.

WDW is dead to me

You people are very difficult to please.

but it’s a about 50 some days early So unsure if this will stick.

unsure if this will stick

I offer two arguments in support of it sticking.

Oh, and the front cover of tomorrow’s Independent: 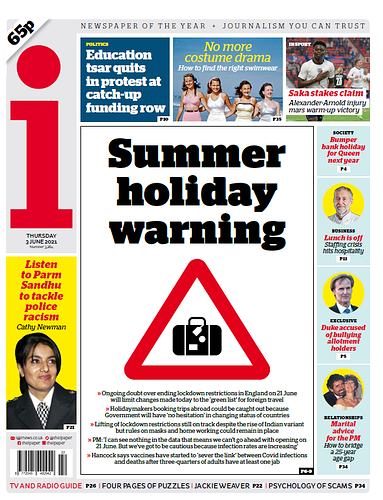 Oh I agree. I’m 98% sure WDW is gonna be “done” for you. For the things YOU enjoy about disney, I see this being nothing but a win.

The only real downside i see is the timeline and that you can’t spend weeks on end on the boat. I mean, even rain doesn’t even come into play much cause most of everything takes place indoors, does it not?

You people are very difficult to please.

I hope this proves true.

I see this being nothing but a win

If I were a glass-half-full person, I’d agree.

Between August 2017 and December 2019 I’d done five terrific WDW and UOR trips. COVID forced me to look elsewhere — so I had a terrific trip back to DLP after a decade away (and to Paris). And now I’m experimenting with cruising and potentially discovering the great joys of that.

And — surely? — by August 2022 WDW will be worth visiting again. Lots of new attractions and stuff back to normal: parades, fireworks and whatnot.