I think there may be more to life than Disney

I’d never seriously considered going on a cruise until Disney announced their Magic At Sea staycation sailings-to-nowhere from British ports. After my usual bouts of indecision, I booked one.

This led me to start preparing for my voyage by obsessively watching YouTube videos. It was pretty exciting. But then, last night, something happened.

I really like Gary Bembridge’s channel, Tips for Travellers. Last night I watched one of his videos about Royal Caribbean cruises, which featured the Symphony of the Seas.

I don’t know if you’ve seen this thing, but it is jaw dropping. It is enormous. It is so enormous it has a central atrium, that is open to the skies, that is so large it has actual trees in it. It has a full-size waterpark.

Before long I had found the Cruise with Ben and David channel, which featured a trip they’ve just taken on the MSC Virtuosa, another enormous (and brand new) ship that features both outdoor and indoor pools. It has a glass staircase stuffed with Swarovski crystals. It has a huge indoor galleria covered with a giant LED ceiling.

This is a whole world I didn’t know existed.

Honestly, I was tempted to cancel the Disney one and book an MSC one instead. I still kinda am.

But, well, I’ll give the Magic a go, but it had better be mind-blowingly good.

Yet if it is, it may sound the death-knell of my trips to Orlando. If it turns out I enjoy cruising, then there is a whole world of cruising out there for me to explore. And it doesn’t require nine hour flights in business class (I’m sorry, but I will not fly transatlantic in coach — I can’t and you can’t make me). I can cruise around Europe, leaving from UK ports I can drive to. I could end up spending a lot less money.

So you better up your game, Disney, because our days may be numbered.

Oh, and I know none of you care about this, but the longer you people refuse to open your damned borders — it’s been 14 months already, just how much do you want to trash your own economy? — the more people will look elsewhere for options. And they may discover those options are pretty great. And, when you finally do open your damned borders, you may find that we won’t all come flooding back in.

But cruises don’t have rides!

But cruises don’t have rides

My two favourite rollercoasters in the world are both in the UK — Oblivion and Rita, both at Alton Towers.

And I’m less in to rides than I’d like to admit. The attraction to me of WDW is the atmosphere. I think these cruise ships offer an atmosphere that’s very attractive to me. And I’m old now. I want to sit down and relax.

I’m not saying I’d never go back to WDW. But not twice a year. Or even once a year.

Oh — and here’s fun. MSC cruises include tips in the headline price and they don’t charge double for single occupancy.

For my pandemic revenge travel, I booked a Machu Picchu tour/Galapagos cruise for Christmas break with National Geographic. The cost will likely push our next Disney trip back, but we were waiting for Tron and the Star Wars hotel anyway. Nat Geo had a very generous change policy in case travel there is still not possible, and so did all the airlines. I looked at the Disney Adventures tour that was similar, but it was $$$$$ while Nat Geo was just $$$$.

when you finally do open your damned borders, you may find that we won’t all come flooding back in.

serious question: Do Europeans really complain about the ‘Ugly American’ and if so why would anyone want to come here? Your trip to DLP and jumping over to Paris was amazing!!!

I’ve never heard that term before and I’m not even sure I can guess what it means.

You will either love or absolutely despise cruising. Disney has a very different setup for cruising which is more structured and equitable as far as dining and show seating, etc. Other cruises it is a free for all for everything. I would absolutely cruise with a smaller ship first to see if it’s your bag before jumping on a megaship. From what I’ve gathered of your personality I can see you absolutely hating and being miserable on a megaship.

I am so close to pulling the trigger on changing my Disney cruise to an MSC one. It is literally $500 cheaper for a cruise that is two nights longer. And there is so much more on the ship because it’s so much bigger.

The one thing that’s holding me back are the dates. They’re not ideal — I’d set sail in one month’s time rather than two and I have set a work schedule for myself that I’d have to change. But, hell, I’m the boss.

And strike while the iron’s hot, right?

It’s a term I’ve heard here, it speaks to the American that goes oversees and does nothing but compare/complain about how much better it is in American compared to wherever s/he is visiting. Maybe it’s something Americans are warned about NOT doing b/c it’s rude. For example, while in France, “In American we do/have ________”

Rita is fun I’ll grant you, I’m not a fan of Oblivion. And they’re both too short. I’m more into the rides though I do enjoy the atmosphere. I’m not convinced I’ll enjoy cruising but hopefully I’ll get the chance to find out this summer.

I wish I could like cruising (motion sickness and irrational fear of drowning) and I hope that you find it wonderful. A 9-hour flight anywhere sounds dreadful, even if it ends at WDW. You deserve another happy spot in life!

I wouldn’t be bothered about the rudeness of it, so much as the idiocy of it. American exceptionalism is so ridiculously blinkered and — frankly — wrong, that it’s laughable.

An American friend of mine was recently boasting about visiting an elite club in LA that is over a hundred years old.

I countered with this: 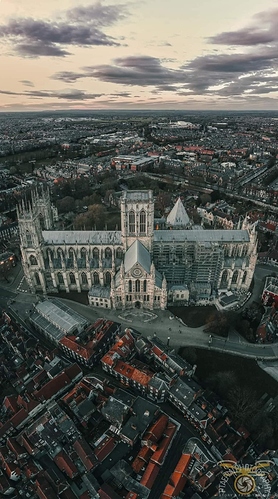 It’s York Minster, about half an hour’s drive from my house. And it’s a thousand years old.

I’ve said many times on these forums that America is a vast, diverse, stunningly beautiful, thrilling country.

But it’s just one of many on the planet. It is unique. But it is not alone.

they’re both too short

What they lack, and what WDW does offer, is theming. My third favourite rollercoaster is SDD, followed by 7DMT.

No, wait, BTMR in DLP is in the top five, too, and might nudge out one of the WDW ones.

it’s the flight back!!

The Ugly American was a book by William Lederer, copyright 1958, about how badly Americans behave while abroad, both leisure travelers and [especially] diplomats. We had to read it in the 11th grade. (Not sure what that translates to over there, but I was 16 years old, and it was 12th year in school including kindergarten.) It was required reading in the early '80’s for sure; not sure about the previous decades. Seems to have fallen out of curricula. It didn’t make as big an impression as the other required books that year – To Kill A Mockingbird, The Good Earth… I can’t quote any passages from it, for instance. But it did leave me feeling slightly less cool if I ventured out of the country. Very … sensitive to the fact that I represent America and Americans. I don’t want to be the ugly American.

It’s always an evening flight and seems to last forever! It’s sad to be leaving but it would be less awful if it left at 10am I think.

American exceptionalism is so ridiculously blinkered and — frankly — wrong, that it’s laughable.

You can get away w/ saying this. If I say it (as an American) I’m called nasty names.

What does blinkered mean? I can infer but I’d like to know

I wouldn’t be bothered about the rudeness of it, so much as the idiocy of it. American exceptionalism is so ridiculously blinkered and — frankly — wrong, that it’s laughable.

Mom, some strange man on the internet just told me I’m not special!