I think the planning area is having a mental breakdown

I mean, who isn’t given the current state of things. But I’ve been running into a few issues for a while, but now they’re starting to just not allow a plan to develop.

I’ve tried putting cavalcades on my list, but even though my plan ends after a few of the runs, it’s telling me it can’t optimize. 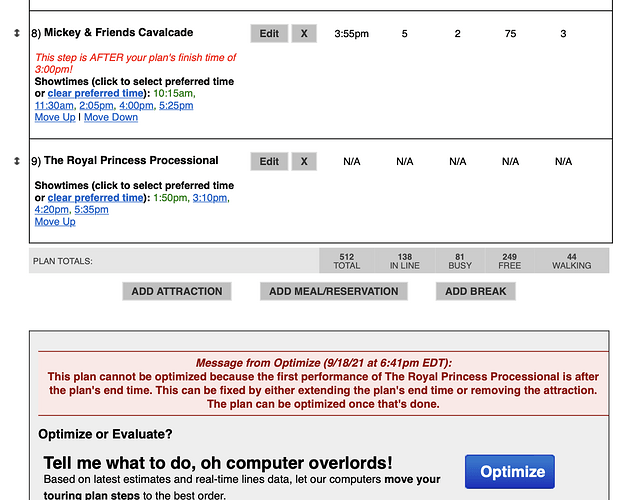 There’s also the issue where it’s combining all the seasonal stuff into the main list. So Christmas and Halloween are together, and some of the Halloween stuff is selectable even though it’s not happening (probably the same could be said for some of the holiday stuff)

This isn’t crippling so much as it is frustrating to choose things(not realizing the name, or thinking I had missed an announcement, or something quietly reopening) and then have the optimizer freak out saying ‘this isn’t happening’ 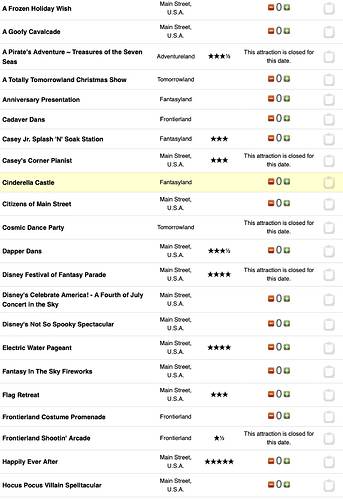 In the seasonal items section, nothing is listed.

I’m having similar issues for DLR. I’ve been using what the official Disneyland site lists as the shows right now to know what to add and all of the marvel shows say they don’t exist and it won’t optimize. So I’m just leaving it as a generic list and thinking when the official schedule comes out for my trip in 20 days I’ll be able to optimize but yes all of the various holidays shows from every possible option are showing up as choices in the regular list of attractions. However, if you go to add something from the drop down to an existing list this isn’t the case.

I haven’t tried in a while but I had issues with all of the non-covid plans last year. You are not starting with a covid plan?

I’ve experienced all of these same issues, both on the WDW and DLR sides of things.

But honestly, I’m feeling like for WDW at least it’s nearly impossible to plan at the moment anyway. I’m thinking of just having a list of what my sis and I want to do over Marathon Weekend and finalize things when it gets closer.

Realizing, of course, that it poses a bigger issue for those heading down Very Soon for the 50th which is frustrating.

I wonder if any of the IT folks could speak to what may be happening. Tag them maybe?

I haven’t tried in a while but I had issues with all of the non-covid plans last year. You are not starting with a covid plan?

No, I haven’t started with a prepared one in years. The typical touring plan never lines up with me as it’s not balanced. I find it’s either too ride-focused, or too attraction-focused. Never “DO IT ALL!” focused

So I just go through the list and select everything, and then whittle it down from there.

Dunno who they are.

Ah. I’m happy to tag he one I know of if you like. I just didn’t want to overstep.

Go for it. Like I said, I don’t know who they are. The whole point of this forum area is to alert them of issues, I imagine. If they need to be tagged to do so, then go nuts.

The thing with the covid plan is that it actually includes everything currently open. You can then delete the things you don’t want to do. It just stops the errors.

Sadly, not so. All the non-ride stuff is missing. For example, the cavalcades, which are the basis of my first problem, are not listed in the covid plans. And adding them, and then doing the above, I get the same error.

It just has the rides, which brings me back to why I don’t do the prepared plans: they aren’t balanced.

While the drop downs fixes the “holiday slurry” problem, it’s a pain to go through all those extra steps to add stuff instead of just going down the list and adding it in bulk.

All the non-ride stuff is missing. For example, the cavalcades, which are the basis of my first problem, are not listed in the covid plans.

Yes they are. I just made this plan in the app

I did it via the site(I don’t use the app, cause that’s a pain).

As you can see, there’s nothing in there but rides. I wonder why the app shows it differently?

EDIT: after tapping around a lot in the app, I finally found how to select a prepared touring plan, but I still don’t see the modifying steps area…

That’s showing the same thing as the main site list, then. Things that are closed are in there, not just only the things that are open. Which is fine, but it brings me back to my original issue.

Did you add all of those steps to your plan?

Yeah. I took the default covid plan, deleted a bunch of things and then added the cavalcades

That’s the whole plan, right there. It hasn’t stopped “optimizing…” since I hit “evaluate” and then “optimize” again.

Close it and look under plans. Sometimes it just optimizes and appears.

Part of it is working, it’s no longer failing at least (no idea why, I’ve done nothing different). But still saying the princess one is past the plan.

Have you optimized a few times and do you have enough time to fit everything in?

I think @OBNurseNH might have tried to tag @david but I don’t know if he does plans?

If he doesn’t the other thing to do is email the plan to the webmaster. I got EXTREMELY quick response time when I did that in the past.