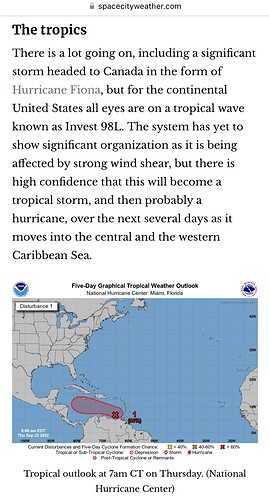 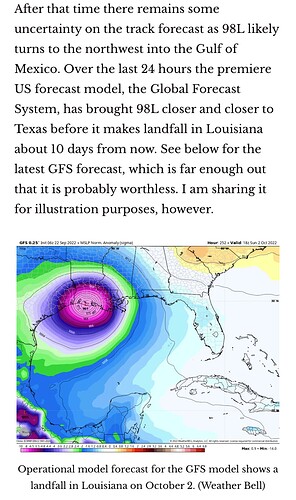 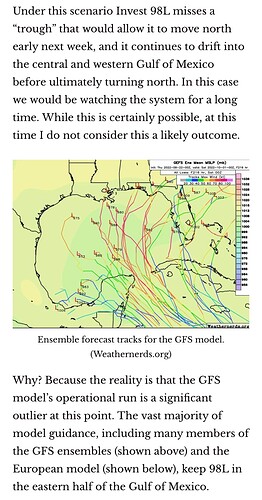 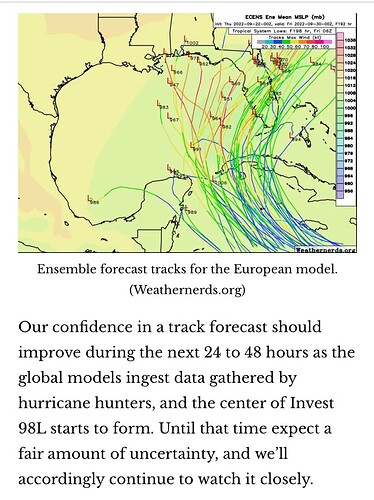 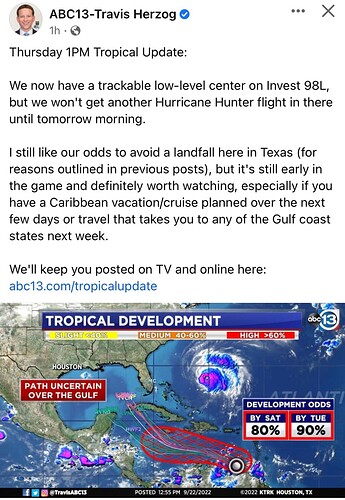 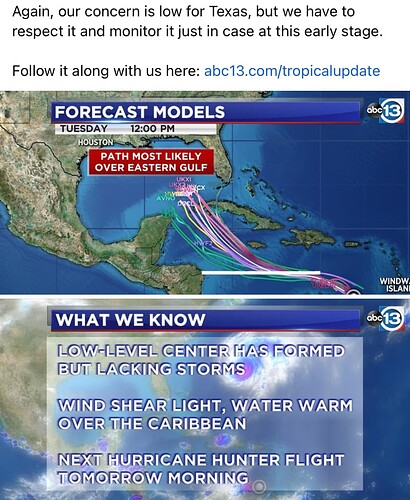 I have my 40th birthday kid free trip to Jamaica in a couple weeks so I’m watching this thread like a hawk! Thanks for the updates!

Looks like im definitely rained out on Wednesday. Officially canceling the trip today. Seriously shocked at the odds of this actually happening when i was worried about it for last couple months.

I’m so sorry. I’m still watching for my trip, I have until the beginning of the week to cancel. Unsure if the longer range track may affect my flight to FL if it comes up the east coast and that’s if I’m ok to still come. Hoping for the best for FL residents as well! 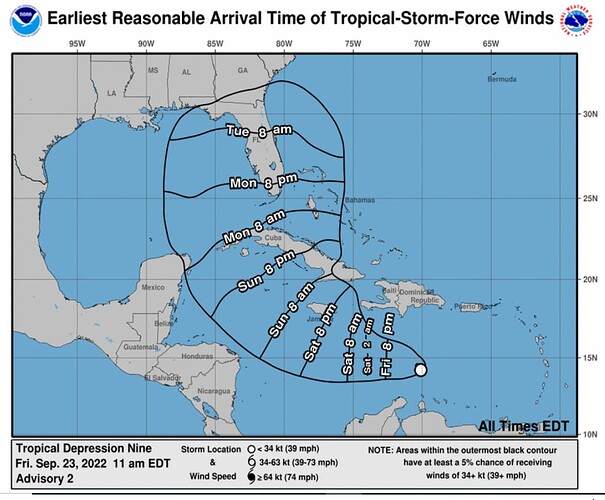 Tropical Depression Nine formed in the Caribbean on Friday with a path that could bring it to Florida next week as a major Category 3 hurricane that could become either Hurricane Hermine or Hurricane Ian depending on how fast it intensifies compared to another new tropical depression in the Atlantic.

In its 11 a.m. update, the National Hurricane Center said TD9 was located about 515 miles east-southeast of Kingston, Jamaica and 1,015 miles southeast of Havana, Cuba with 35 mph sustained winds moving west-northwest at 14 mph.

“The latest NHC intensity forecast has been increased from the previous one and explicitly calls for rapid intensification as the cyclone crosses the northwestern Caribbean Sea,” said NHC hurricane specialist Brad Reinhart. “The system is forecast to approach the Cayman Islands and Cuba as a strengthening hurricane, with additional intensification likely once it emerges over the warm waters of the southeastern Gulf of Mexico. In fact, this forecast calls for the system to approach the Florida peninsula as a major hurricane by day 5.” The cone of uncertainty now encompasses nearly all of Central Florida with the consensus landfall somewhere between Tampa and Naples with a path that could bring it up through the middle of the state.
“I’m a Floridian. so I’m going to speak to you candidly. Don’t panic,” said NHC acting director Jamie Rhome. “It is important that you take this threat seriously and begin to execute your hurricane plans in a calm and orderly fashion while there’s still time to get ready.”

There will be a slow intensification over the weekend projected to become a tropical storm later today and grow into hurricane strength by Monday morning with its center south of Cuba near the Cayman Islands and Jamaica.

“We are watching the path, still not quite clear-cut, but it is aiming in the general direction of Florida sometime next week,” said Spectrum News 13 meteorologist Bryan Karrick. “So I’d spend the weekend getting your hurricane preps ready to go, maybe top off the gas tank, and get your generator ready, some bottled water and canned good as well as we watch the system next week.”

Already in Central Florida, which has seen a lot of rainfall of late, the Seminole County Office of Emergency Management has started its sandbag service and are preparing shelters in the event they’re needed. Shelter locations are not announced until the shelters are fully set up and staffed. An estimate at the storm-force win speed probabilities of Tropical Depression Nine as of a 5 a.m. update on Friday, 9/23. (National Hurricane Center)

The five-day path has it hooking north by Tuesday over Cuba and then parked off Florida’s southwest coast as a Category 3 hurricane with 115 mph winds and gusts of 140 mph by Wednesday morning.

“The system already possessed a well-defined circulation for the last 12 to 18 hours, but it was only overnight that the ongoing convective activity was able to persist long enough near the center to be considered a tropical cyclone,” said NHC hurricane specialist Phillipe Papin.

Here are the 11 AM EDT Sep 23 Key Messages for Tropical Depression Nine. Strengthening is forecast in the coming days, and residents in Cuba and Florida should ensure they have their hurricane plan in place.
For the latest updates: http://hurricanes.gov pic.twitter.com/ofzDMSNpA5

There are no coastal watches or warnings at this time.

Tropical Depression Nine will likely drop heavy rainfall, flash flooding, and possible mudslides in Aruba, Bonaire and Curacao, with heavy rains in Jamaican and the Cayman Islands coming in the next few days.

“There is still a healthy amount of uncertainty in the track forecast at the day 4-5 timeframe,” Papin said.

Elsewhere in the tropics, Hurricane Fiona has passed Bermuda and is now headed toward Canada, Tropical Storm Gaston has started to turn and is headed toward the Azores islands in the Atlantic and Tropical Depression Ten formed off the coast of Africa.

The NHC is also tracking one other system with the potential to form into the next tropical storm or depression. TD10 formed from an area of low pressure with shower and thunderstorm activity located between the west coast of Africa and the Cabo Verde Islands hours after TD9. Also in the central tropical Atlantic is a broad area of low pressure several hundred miles west-southwest of the Cabo Verde Islands that continues to produce some disorganized thunderstorm activity. The NHC said some development is possible as it drifts northwestward or northward in the central Atlantic. Hurricane Fiona climbed back up in intensity to a Category 4 hurricane with 130 mph sustained winds as it speeds north toward the coast of Nova Scotia.

As of 11 a.m. its center was located about 250 miles north of Bermuda, which is no longer under a hurricane warning, but still a tropical storm warning. It’s moving northeast at 35 mph projected to make landfall later today a large and powerful post-tropical cyclone with hurricane-force winds, then, move across Nova Scotia and into the Gulf of St. Lawrence on Saturday, and then across Labrador and over the Labrador Sea on Sunday.

While not a threat to Florida, the swells from Fiona are still causing surf and boating issues, with strong rip current conditions on the U.S. East Coast including Florida as well as the Bahamas. As of 11 a.m., Tropical Storm Gaston gained some strength back to 65 mph sustained winds as its center was located about 115 miles north of Faial Island in the Central Azores moving east-southeast at 7 mph.

“A slower southeastward motion is forecast today followed by a southward, and then southwestward, motion tonight and early Saturday. On the forecast track, the center of Gaston will move near or over portions of the Azores today through early Saturday,” NHC forecasters said.

The system’s tropical-storm-force winds extend out 175 miles, but it’s expected to become post-tropical by Saturday as it moves back west in the Atlantic.

Yep, all the models are starting to converge on the eastern Gulf path now. 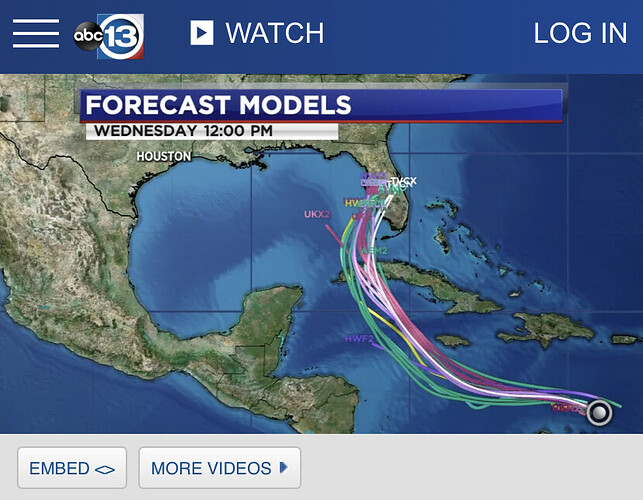 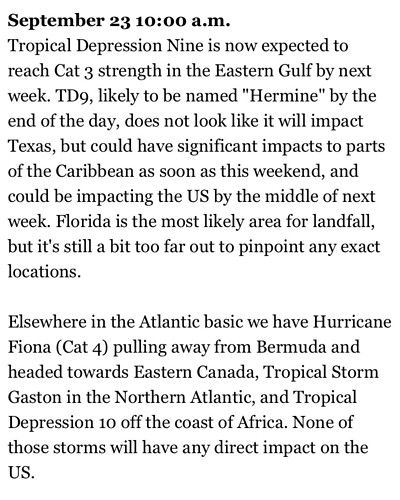 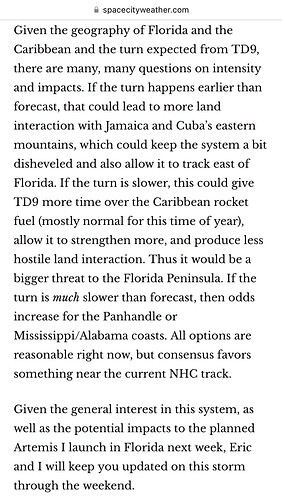 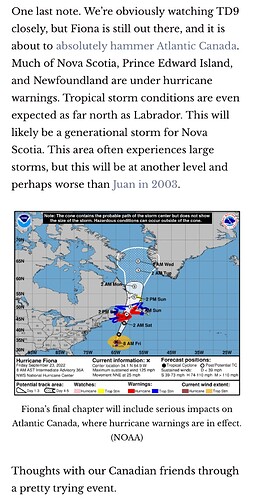 Hoping for a positive check-in from @4ljs ? The worst of Fiona should have passed overnight.

Hoping for a positive check-in from @4ljs

Thanks! We got power back about 20 minutes ago (less than 24 hrs without), sorted out the water pump, set our angry cat free and we’re good to go. No idea what the island looks like, but everyone we know is safe and sound. Fun clean up time now.

ETA best thoughts for Atlantic Canada and Florida with TD9 now. Neither one look good 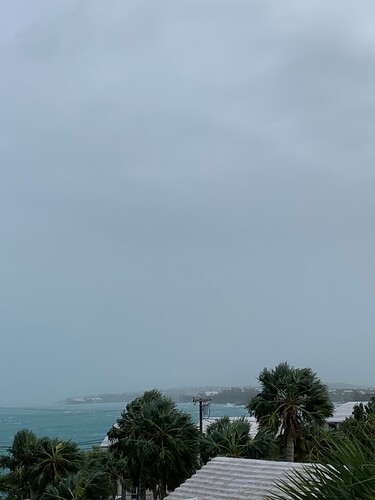 Yikes. I’m supposed to fly into Orlando on Wednesday

Yeah…just about every year we go to Florida in September and I always forget to pay attention to the hurricane threat until the day before and we’ve always gotten lucky. I have been watching the coast of Africa like a hawk this year and thought we were in the clear until, what, yesterday? Luck has to run out sometime. It shouldn’t effect our flights on either end but it looks like we’re going to have a wetter trip than usual and some extra hotel time. New adventure!

WDW straddles Orange and Osceola counties, the former is not named in the ER order but the later is. Tropical Depression Nine cone of uncertainty as of 5 p.m. Friday, Sept. 23, 2022 as it’s projected to grow into Hurricane Ian by next week and strike Florida. (National Hurricane Center)

Tropical Depression Nine formed in the Caribbean on Friday with a path that could bring it to Florida next week as a major Category 3 hurricane prompting Gov. Ron DeSantis to declare a state of emergency in 24 counties.

“This storm has the potential to strengthen into a major hurricane and we encourage all Floridians to make their preparations,” he said. “We are coordinating with all state and local government partners to track potential impacts of this storm.”

Not in the order are Orange, Lake, Seminole or Volusia.

The system could become Hurricane Ian, as the name Hermine was taken by a new tropical storm that formed Friday evening off the coast of Africa.

In its 5 p.m. update, the National Hurricane Center said TD9 was located about 430 miles east-southeast of Kingston, Jamaica and 930 miles southeast of Havana, Cuba with 35 mph sustained winds moving west-northwest at 15 mph.

A hurricane watch was issued for the Cayman Islands and tropical storm watch for Jamaica. An Air Force Hurricane Hunter aircraft is on its way to investigate the depression, but the next full advisory won’t be until 11 p.m., the NHC said.

The 5 p.m, cone of uncertainty still has the system approaching Florida late Tuesday and making landfall Wednesday, but the consensus center path has moved slightly up the southwest coast closer to Tampa than the 11 a.m. advisory. “Once again, the global models have shifted westward this cycle during this period, and there remains increased track uncertainty late in the forecast period once the cyclone emerges into the southeastern Gulf of Mexico,” said NHC hurricane specialist Brad Reinhart. “The latest NHC track forecast has been adjusted westward from 48-120 hours, and it lies near or slightly east of the latest track consensus aids.”

The cone of uncertainty now encompasses all of peninsular Florida with a path that could bring it up through the middle of the state.

I know it’s still early but this one is the closest to us since we moved here. Going to fill up the generator gas can tomorrow. Other than that we are always pretty prepared.

we dont’ have a generator

Nice, we are pretty central and all the schools in our area are designated shelters for folks coming inland from the coast. We do have plan B as well though and will leave if need be

Another time we drove from Lee cty to Gaitlinburg, TN to my parent’s cabin there. The hurricane did not follow us there

Just got a text about sandbag distribution for Merritt Is. We don’t live on the island so I’m not going to worry about it

hurricane followed us and my Dad wasn’t happy 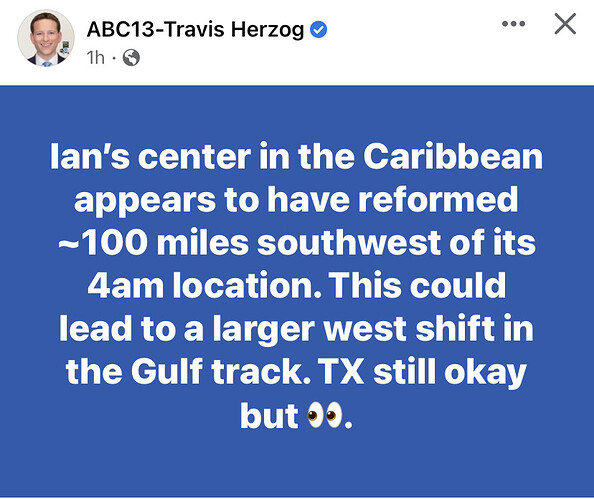 ETA:
His referente below is 10am central time, so should be #soon 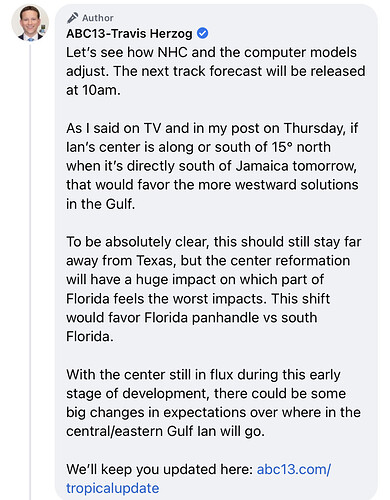