How wet is wet at SM and KRR?

Last year when we went to DLR, my wife and daughter got completely soaked when they rode Splash Mountain (first row). However, when I rode it I didn’t get as much as one drop on me (last row). Same with Grizzly River Run, we rode with ponchos and didn’t get that much wet yet we saw some people walking around completely drenched.

So, my question is: How wet do you get and SM and KKR at WDW?

KRR it entirely depends on where you are in the raft. Last time I was on (March), I managed to get soaked; 3 people in our raft were barely sprayed.

Splash, only A Little.

In my experience, Splash Mountain you generally get a little wet, not drenched. But it depends on various factors, including how the weight in distributed in the boat, etc. (Most amusement parks also custom control the amount of potential wetness on flume rides so that on warmer days, you can get more wet, and cooler days, less wet. I don’t know if Disney does that or not.)

For KRR, as @MouseGirl42 said, it varies wildly. Unlike a lot of river raft rides, there aren’t any places where you are guaranteed to get drenched. But, there were places where water can spill over the sides and get your lower half (in particular) drenched. In the times I’ve been on it (twice), once pretty much none of us got very wet. The second time, about 1/3 of the raft got drenched from the waist down.

Thank you both. I guess I’ll avoid KRR. Our diaper bag is already heavy with all the baby stuff and I wouldn’t want to add extra clothes and sandals.

I guess I’ll avoid KRR. Our diaper bag is already heavy with all the baby stuff and I wouldn’t want to add extra clothes and sandals

We just throw on ponchos before we ride KRR and have always managed to stay mostly dry. Even with shoes…if memory serves me correctly there are small bars (or something similar) where you can place your feet to keep them off the floor and keep them dry. We have always gone in November when it’s not ideal to be soaking wet and we have never had a problem.

On KRR everyone got pretty wet on our raft. My son and I got it the worst and were drenched. For SM, we typically only get a few drops.

How wet do you get and SM and KKR at WDW?

Both are very seat dependent. But in my experience you will get moderately wet on splash and completely doused on kali. We poncho up for Kali when we don’t want to be doused. We never poncho up for splash.

Both are very seat dependent.

Speaking of which, a general piece of a advice when it comes to ANY flume-style ride. If at all possible, if you want to MINIMIZE the amount you get wet, you should have the heaviest people in the BACK of the boat, sitting as far back as possible. When a boat is front-heavy, the scoop they design in the front to catch the water will be more submerged and cause a bigger splash. If the boat is back-heavy, it tilts the scoop upwards enough to reduce the splash. It won’t eliminate, but it can make the difference between mildly wet and soaked!

For both we’ve never had issues with shoes getting soaked. We do tend to wear water wicking clothes so that if you do get soaked, you’ll dry quickly - avoid lots of cotton, particularly jeans as you’ll never dry.

Kali does tend to be wetter, but it is very random as to how wet. I found Splash at DL to be worse than at WDW because on occasion the single file design at DL let water just ride up the side and onto me while with WDW side by side seating that didn’t happen. Splash is adjusted quite a bit based on time of year at least on the “extra” water sprays - for example the spray that shoots over riders as they come down the main hill will hit those about to go up for the first time when it is warm. In cooler temps they won’t have that on or will time it so it doesn’t hit a flume…

We have always been able to walk off both, but planning ahead on what you wear helps considerably…

I will never forget the ride on Splash when a man was laughing and telling his son that I was going to get soaked because I was in the back seat. The wave of water did come, but it came down right over me and landed completely on him. It made me smile all day.

I had a “splashover” incident like that happen to me once, but with the opposite outcome!

This was on a flume ride at King’s Island called “Mill Race”. It was one of these small, gentle flume rides with one drop at the end, maybe 25 ft tall, you know?

Anyhow, the boats held up to 6 people. Well, they put my two brothers and I in the back with a family of three in front of us. But the father was HUGE. I mean, football player huge. He probably weighed more than us three brothers combined. With him and his wife and son in front of us, the boat was extremely front heavy.

Needless to say, the wall of water that came at the bottom of the hill flew over them and drenched us. I mean drenched. Like, we went swimming in our clothes drenched.

A short time later, we we were walking back to meet our parents, some kids stopped us and asked if we got that wet on the river raft ride (which ALWAYS would soak you). “Nope!” we told them, as our sneakers squished and our clothes left behind a dripping trail of water. “Mill Race!”

I have walked off of both rides totally dry and utterly drenched. However, I will say that it is more likely that you will get drenched on KRR.

KRR is squeeze out your underwear type drenched if you are unlucky, but it depends on seating. Basically if you go down the flume with your back to the fall… you have been selected by Kali herself.
I chose to ride once (or twice or three times) in the rain once and it was the most fun I’ve ever had on KRR.
SM I’ve never had more than a few drops on me so I wouldn’t worry about that one.
I suggest embracing your inner river otter and enjoying the wet! 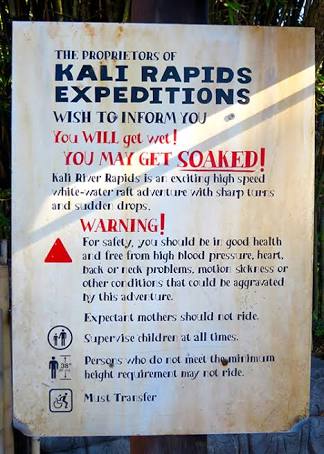 I have gotten soaked on SM once. It was a hot day and the logs were stacking up to unload (there must have been an issue). Anyhow, right before you head into the final scene, ours stopped right at the point where the water is cascading off the rocks on the right hand side - and splashing right on me. DS thought it was hilarious. I was completely drenched. But I think that was the only time I ever got drenched on that one.

Agree, KRR totally depends on whether or not you are facing backwards and hit the water first. Total luck (or unluck) of the draw!

That has to be the most rotten bad luck ever! but I agree with DS…

There was one time in January we rode Kali where the lines were nonexistent since it was around 70’ish so we were able to stay on - I think we did 8 straight rides. After a few you can only get so wet, so you may as well enjoy it…

@FindMeAFishingSpot that happened to us too. We got soaked as if we had jumped in a pool with our clothes on.

Anyhow, right before you head into the final scene, ours stopped right at the point where the water is cascading off the rocks on the right hand side - and splashing right on me.

If you are me, you will get drenched on KRR every. Single. Time

I have bought a $20 beach towel at the store next to KRR three visits in a row. I wear dry fit clothes to AK now.

The rest of my family remains bone dry and thinks it’s hilarious.