How Good is Buzz Lightyear?

My kids liked Buzz Lightyear better than TSMM. I think they found it easier to shoot in Buzz. I found both of them to be average attractions. Fun, but nothing extraordinary. I don’t get the hype for TSMM. But to each their own.

TSMM is way better. I can pull that thing really fast and with good accuracy

I’m don’t get the hype for TSMM

TSMM was a surprise hit for me last summer. It was barely on my radar but I saw a same-day FPP for it as I was walking to DHS from Epcot and I thought I’d give it a try.

I’m scheduling one ride on BLSRS but wondering if it’s worth two. TSMM certainly was and I’ll be traumatised if the opening day hoopla of TSL means I won’t get to ride it this summer.

We ride Buzz once every trip. We try to ride TSMM AT LEAST twice.

We did two rides because my kids liked it. It’s hard to say whether you will like it. Some people prefer Buzz over TSMM and vice versa. If you are competititive and want to improve your score or become the “Galactic Hero” , then you may want to try it twice.

If you are competititive

I’m not competitive. I prefer not to suck at something, though. I think my scores on TSMM were probably quite poor, but they weren’t so horrible that I felt like a failure. I just thought it was a really original ride and tremendous fun.

I like BLSRS so much better than TSMM. Buzz had a story (if I remember correctly) and was super entertaining. I though TSMM was just carnival games which I hate playing. It probably helped that one of my kids LOVED BLSRS and talked about it nonstop before we went. I don’t get the excitement about TSMM.

I prefer Buzz (not that we can’t do both of course). Only been to DL so far, headed to WDW next month. I like how sometimes you can get off and get right back on. Not sure if it’s really true, but seems like it lasts longer. TSMM seems like it’s happening at a frantic pace and then it’s done. TBH, when we go next month I’d have been fine forgoing TSMM FPP for RnRC with my oldest, but I was guilted into all going on TSMM together. so standby for coaster it is…

I do two of both. I like TSMM better because you can be more accurate, and because pushing the button is harder on my hands than pulling the string thingy. But I enjoy both. Don’t make me pick!!!

6 or maybe even a 5. I usually skip it unless it falls perfectly into my plans, no one complains probably because no one truly cares. For comparison, I think that MiB at Universal is better than Buzz.

I think that MiB at Universal is better than Buzz.

Woah! I fell asleep during MiB.

I like both but TSMM is better. I would give Buzz a 6. I would also agree that MiB is better.

Both parents and kids of this family vote for Buzz. Maybe because during MNSSHP we got to do it multiple times and our one time on TSM was with FP and was over so quickly.

Buzz at WDW gets a 4.5 from me. It’s not nearly as much fun to my crew as Toy Story, and I hate that the guns are attached and you can’t remove them from the console like this picture shows. No matter how hard I try to remove it, it just won’t budge. You may wonder why I even would try. Here they are in WDW: 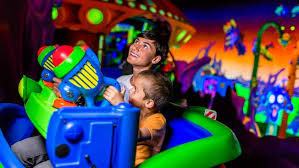 At Disneyland the guns come out of the holster, making it far easier to shoot the targets. I give it a 6 at DLR. 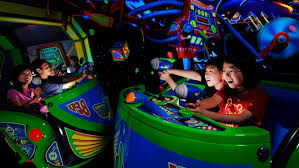 This is the far superior technology though: 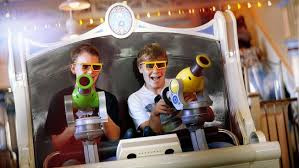 Buzz is just one very long, same game throughout, not the assortment of games in TSMM. However, you control the spin/aim of your ride vehicle. No 3D glasses for Buzz. I thought TSMM was lots of silly fun. I have to admit, I didn’t like Buzz my first time (DH made it spin too much/unexpectedly, I got lousy scores) but this last trip I had way too much fun. I learned to just shoot continuously as fast as I could, he didn’t spin it us as much, and I had nearly double his scores! We rode it two different days, and I outdid him both times! It would not be nearly as much fun solo at all. I think TSMM would still be fun solo for me, the onscreen characters make it more playful.

If you can do it with a very short line, or nth FPP, then do it to experience it once.

11 or 12. I’m not a gamer and don’t give a **** what I “score” on a ride. I find the slightly goofy sets and 3D figures in Buzz to be much more fun than a series of 3D screen-based video games. I ride Buzz every trip; I ride TSM if I’m with someone who has to ride it…

Doesn’t matter if I’m with wife, or kids, if I’m in, I control the spin. Sit on right, spin with left. Helps my scores