DH and I can’t ride any of the rides at HS now that the GMR is gone, but DD16 would never speak to us again if we didn’t go at least one day while we are there. While she is off riding all the rides, I want to spend time at some shows. I really don’t know what any of them are like, except for Indiana Jones. What are your thoughts about Walt Disney Presents, Beauty and the Beast, and Voyage of the Little Mermaid? DH just wants to shop, but I need some type of entertainment. If DD16 wasn’t too anxiety-ridden, we’d leave her there and go over to Epcot.

Beauty and the Beast is fantastic. You didn’t mention Frozen sing along but that it also fantastic, it’s really funny, it’s more than just singing the songs.

Voyage of the Little Mermaid is good, but not on the same level as those two.

We enjoy Beauty and the Beast and Frozen most of the shows at HS. Little Mermaid is fine, but not an “every time” thing for us. I’ve never done Walt Disney Presents.

@missoverexcited & @BoilerMomPharmD - I don’t think that I can get DH to go to the Frozen sing along. However, I doubt I can get him to do Beauty and the Beast or Voyage of the Little Mermaid, either. I guess I was thinking that neither of them would like Frozen, but then DD16 will be elsewhere having the time of her life. I may change Little Mermaid to Frozen. Thanks!

Beauty and the Beast is a mini broadway-like production. It is really fantastic! We are planning on Frozen sing a long this trip as it get so many positive reviews due to the historians. Little mermaid was just ok for us. Muppet show is another I would like to do.

Muppet show is another I would like to do.

Muppet show is another I would like to do.

Muppet show is good, but the 3-D effects might be a problem for some. For me, I half the time have to just close my eyes because the 3-D effects are almost nauseating otherwise.

I was like that for It’s Tough to be a Bug, and decided after that that I wouldn’t do the Muppet Show. I was sad.

I would try to convince him to do Beauty and the Beast–it’s fabulous. The Frozen sing-a-long is great too–mostly because of the comedy. Little Mermaid is fine, but not spectacular.

I heard somewhere (can’t remember if it was here) that all the narration and witty banter between the scenes at the Frozen Sing Along was removed and now it’s just the songs.

Somebody asked about it here and were told they were wrong. One of the historians has gone to work at HDDR, but there are lots of others, it was just a misunderstanding.

Try to convince him. DH is super not into shows and he thought it was hilarious!

He just told me that he’s willing to do the Frozen since it’s funny. I have removed Little Mermaid from my plans and added Frozen. He still doesn’t want to see Beauty and the Beast.

Still would like some opinions on Walt Disney Presents. I guess I need to find out what it is…

I agree, it is surprisingly entertaining.

Walt Disney Presents is the museum of memorabilia. It’s pretty nice and they have a 15-min movie about the Walt as well but that changes I think. When I was there in May it was the Incredibles 2 preview.

Launch Bay is worth seeing if you have any Star Wars nostalgia at all. The 10 minute movie they show actually made me cry a couple times.

Maybe you don’t like Star Wars at all…but my whole family enjoyed both the movie and seeing some of the props, etc.

We’ll be there to see Chewy (again) and BB8. We apparently watched the 10 minute movie on our last trip. Must not have been memorable because I don’t remember watching it, but DH swears I was next to him…

DH and DS watched it while I was at Frozen. Win win!

So, here is my plan for HS while DD16 is off riding her rides. I’m going to make a TP just for her. What are your thoughts? Is Star Lord and Groot still at HS? I didn’t see it on the TP. 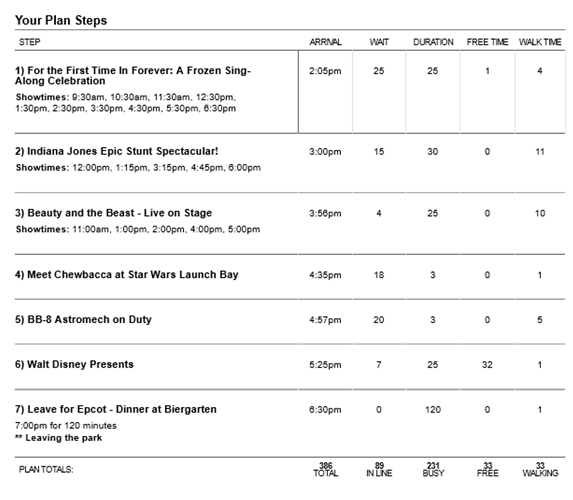 There have been rumours that they are leaving but as far as I know they’re there now.

That looks like you’re cutting it pretty fine going to BatB. It’s a huge theatre but still…I’d hustle from Indy.