Highway in the Sky Dine Around

Have you heard about the new “Highway in the Sky Dine Around”?
For $150, gratuities included, sounds well worth it and quite cool!

Definitely pricey, but it would be a really cool “date night”…

Price wise I’m not sure it’s ridiculous, although it depends a little on the entree at Citrico’s. But given the Citrico’s normal entree menu runs $30 to $49 per w/o sides, I could easily see $60-75 there presuming alcohol is included. Toss in the appetizers all around plus desserts and a few more “libations” and you could be pushing that $150 and that’s before the added value of the Wishes observation platform. It’s not necessarily a bargain and it likely depends on how much alcohol you’re allowed (and want) to consume plus the selections, but that’s not a bad price by DIS pricing standards…

And if you’re a local you get valet parking for free too. Something I’d consider if it gets good reviews…

Was thinking the same thing. The first thing I did was look to see what food cost at Citrico’s. I think you could easily get to $150 per person doing all this on your own, especially if you include gratuities! Add in the guided tour, and special treatment, and I think $150 is quite reasonable. Just gotta find someone to watch the kids! I’m not paying $300 for them to tag along!

I agree; as far as “value” goes, it’s probably one of the better deals Disney has offered. Entree at Citrico’s is about $50, 4 drinks about $40, Apps $10, Dessert $10; that’s $110 just in food/drink. Add in $25 valet parking, a private Wishes viewing deck, and a guide - it’s really a steal. I’ve spent that much at a (long) single signature meal including 2 drinks, 2 glasses of wine, app, entree, and dessert.

I have it booked for January 24 with my two best friends. We thought it looked like a great treat and good value for what’s included. I’ll let you all know how it goes.

Yeah. I feel like that is a couples-only thing. $300 is plenty! At least over 21, he’d get to enjoy the alcohol included. Anyone under 21 should be charged much less!

Or better yet, they should have 2 prices- 1 with alcohol included and 1 without

I’d consider this, but only if they complete a thorough refurb of the monorail first. The way those trains are smelling lately, I don’t want to get on them between meal courses.

I tried to jump on this for 4 separate nights in January. Nothing available. I wonder what the capacity is. Must be pretty low. I can’t imagine a massive group trying to stay together and keep this on any kind of schedule.

I agree about the non-alcoholic option being an oversight. We’re a family of 3, with DD being 10. Can’t ditch her for 3-4 hours while we have an awesome night, even if we could get a reservation.

The other funny/crazy thing would be to just shadow the actual group and have drinks/food along with them.

Any updates of anyone actually DOING this?

We are booked for it for our September '17 trip. Would love an actual review.

I’ve done it. We had a great time. What would you like to know?

Was there a variety of apps to choose from? What drink choices were there? How many drinks are included? How many people were in your group? What is the point of the guide? What did people wear?

I may think of more - Thanks!!

Was there a choice of entree at Citricos? Did you like Citricos? I’ve never been there before…

I think the first thing to note is that there weren’t any choices. Not really. They brought out bites and appetizers and drinks to each person. Everyone got the same things, except the people who specified allergies. It does seem like they tweak the menu from time to time, so you might not get exactly what’s shown in the online reviews people have posted, but what we had was pretty darn close!

All the food was excellent, but I like pretty much every kind of food. I think the menu would make it or break it for most people. If you dislike even one item, you might feel like the event has less value for you. You can easily spend less by ordering what you choose at the same places on your own.

No choices, but it’s all very well planned and everything was yummy. Think of it as a chef’s tasting menu. You just show up and they make all the decisions. It leaned more towards mixed drinks than wine, in general.

The first stop was The Wave. We had a tiny cup of some fabulous soup and a rum-based cocktail to start.

People were encouraged to mingle and get to know each other. I’d guess there were 25-30 people total? Maybe? My number estimation skills are poor, so I could be way off. It felt like a good number - enough to find compatible people but not so many that it was crowded. We fit comfortably in two monorail cars. Most were older, and there as couples or with a friend or two. I was with my 2 friends and we ended up hanging out with a young couple and the only solo lady in the group. We were obviously the youngest sub-group. (I’m 43, so not all that young!)

The guides were really just there to get us from place to place. They were chatty and friendly during the travel portions, but stayed to the side at each location. They told us when we needed to wrap up before moving on and directed us to bathrooms and made sure everyone was accounted for before moving.

Second stop was The Poly. They did a weird “Poly is great!” spiel before escorting us to the outside Tiki Terrace, but I’m not sure that they still do that. One of my friends has allergies, so the three of us were at a separate table set apart from everyone else. We are all pretty quiet and introverted, so we didn’t mind that. Other people might not enjoy that at all. We had 2 or 3 different bites here, plus a full sized hippopota-mai-tai. Again, everything was great, although my friend with allergies (fish & shellfish) thought hers were bland.

Then we went to the Grand Floridan. Citricos entree was first for us, although it looks like they now so this as Step 4. Again, the 3 of us were at the “allergy” table and the others were at one long table. We chose red or white wine. They brought bread, butter and our entrees to us and we had a reasonable amount of time to eat. The plate was really good and we very much enjoyed, but again, you get what you get. No choice.

We moved to an are next to Mizner’s in the GF for the fruit and cheese course with champagne. This was FABULOUS - way better than the usual Disney cheese boards, in my opinion. I tend to not be impressed with Disney charcuterie, but this one was well thought out and interesting. Groups of 4-6 shares each board.

Then we went back to the Contemporary for desserts, coffee drinks and the fireworks viewing. We were all comfortably tipsy by then. The desserts were nice, but kind of an afterthought. They gave us a box of truffles when we left. We left right after the fireworks ended and rushed over to MK and got in before they closed. I’m not sure how that worked out, but it did! We got in line for 7DMT right before they closed, did that, and saw the Kiss Goodnight on our way out.

As for clothes, here’s a photo of me, my 2 friends and me at the end of the evening. I’m still wearing my event lanyard. None of us were dressed terribly formally, but as I said, we were the young ones.

I think you’d be comfortable in anything that’s a step up from casual. 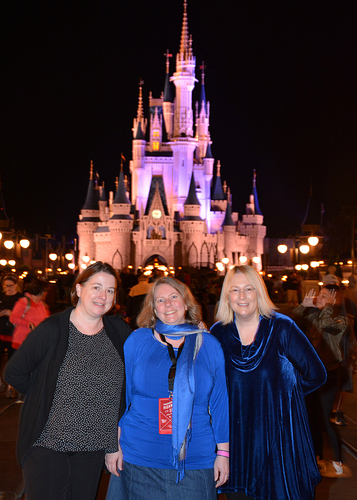 It really was the highlight of our trip!

JI can’t recommend this enough. It really was worth it. Delicious food and a great opportunity to try the restaurants around the monorail resort loop. Really well organised and we got to meet some lovely people. We did post a report with photos and menu on here somewhere but I can’t seem to find it. I’ll keep trying.

I agree with @sallyeppcot it’s like a taster menu and you haven’t any choice however they were very accommodating to allergies and non alcoholic wishes of others in the group so I’m sure if you let them know of any concerns they’d fix something for you. As ever customer service was excellent.